The main challenge for the emerging technology of quantum information lies in the development of an effective quantum ‘hardware,’ that is, a set of physical methods to implement many qubits (the elementary units of quantum information, analogous to classical bits) and to process them simultaneously. In photonic implementations, qubits are realized using photon quantum states by exploiting different properties of light, such as polarization, wavelength, and spatial modes. Usually each photon carries a single qubit, but in order to expand the available quantum memory or to enhance the efficiency of a quantum communication channel, it may be convenient to squeeze more than one qubit into each photon.

Although it is relatively simple to write multiple qubits directly in each photon, there has been no straightforward way to transfer qubits initially carried by two distinct photons into a single photon. Such a quantum-state joining process, depicted in Figure 1, could be used to multiplex quantum information and transport it in a reduced number of photons. Similarly, there has been no way to take a photon carrying multiple qubits and split them among separate photons, for example, to demultiplex the quantum information across separate channels. 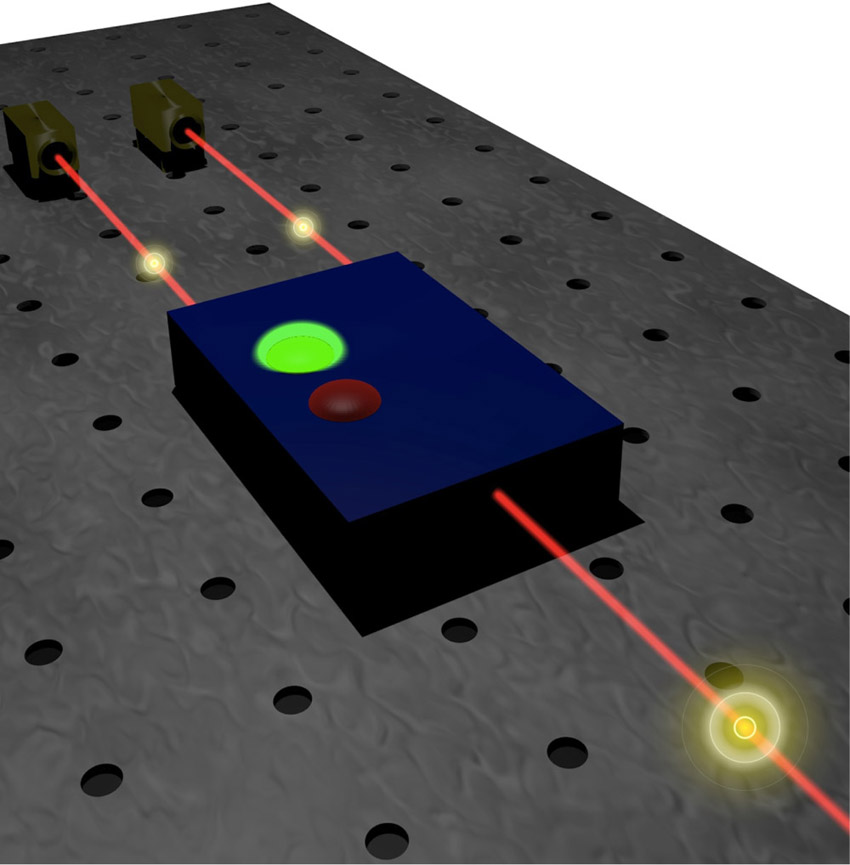 Figure 1. Artistic representation of the quantum joining concept. Two input photons, each carrying a qubit, are turned into a single output photon carrying both qubits. The demonstrated device is probabilistic, but the user is informed when the process succeeds (represented by the green LED turning on).

The problem with implementing these tasks is that they require an interaction between photons. But photons do not interact in vacuum, and in ordinary nonlinear media they exhibit exceedingly weak interactions. A way to introduce an effective interaction is the KLM method1 (named after Emanuel Knill, Raymond Laflamme, and Gerard Milburn), which exploits two-photon interferences and a subsequent ‘wavefunction collapse’ occurring on measurement. This idea enabled the first experimental demonstrations of controlled-NOT (CNOT) quantum logical gates among qubits carried by different photons,2 and it is the basis of our demonstration of quantum joining.3

Our joining process takes two input photons, called the ‘target’ and the ‘control’ photon, each initially carrying an arbitrary polarization qubit. We represent the logical zero and one states by horizontal |H〉 and vertical |V〉 polarization states, respectively, in the usual ket notation. Thus, the target photon is in a superposition state |ψ〉t=α|H〉t+β|V〉t and the control photon is in state |φ〉c=γ|H〉c+δ|V〉c, for some complex numbers α, β, γ, and δ.

A single CNOT gate could transfer the qubit from the control to a qubit state carried on the target, if the latter state were initially zeroed. However, the interference processes used in the KLM CNOT gate require the two photons to be indistinguishable in every respect, except for the qubit |φ〉 involved in the operation. Hence the interference is disrupted by the presence of the qubit |ψ〉 already carried by the target photon.

To get around this obstacle, we devised an optical scheme based on three steps. First, ‘unfold’ the target qubit by turning it into the superposition α|H〉t1+β|H〉t2 of two zeroed polarization qubits, traveling in separate optical modes t1 and t2. Second, duplicate the control qubit on an ancillary photon, creating the entangled state γ|H〉c|H〉a+δ|V〉c|V〉a. Finally, execute two CNOT operations, one with modes c and t1, the other with modes a and t2. In this way, each CNOT operates with a target photon that is zeroed and carries no additional information, but the target photon is always interacting with either the control qubit or its entangled copy. 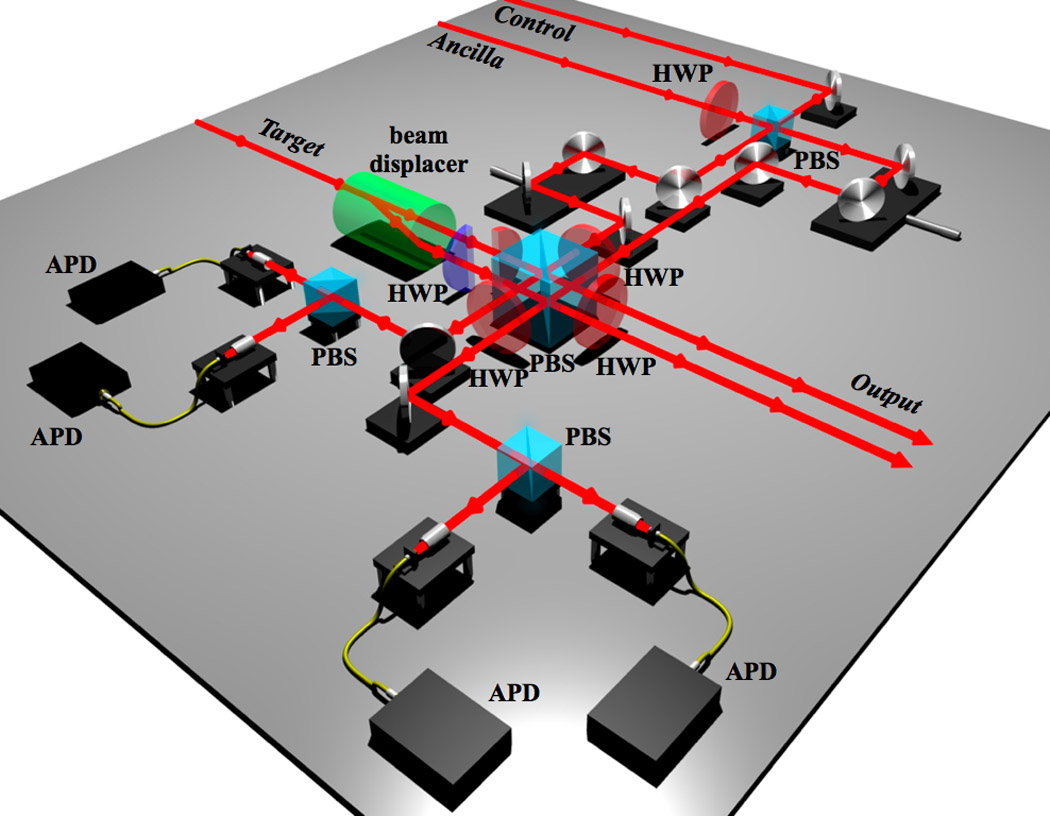 Figure 2. Experimental setup for joining all of the quantum information of a target and a control photon into one output photon. The target photon is ‘unfolded’ into two optical modes by a calcite beam displacer, while the ancilla photon is prepared with a half-wave plate (HWP) before interfering with the control photon in a polarizing beam splitter (PBS) at upper right. The four optical modes then interfere in the central PBS to execute two CNOT operations. Finally, the success of the joining operation is conditional on the measurement of two of the three photons by single-photon avalanche photodiodes (APDs).

To complete the joining process, the control and ancillary photons (modes c and a) must be measured. For a specific outcome of this measurement (which occurs with probability 1/32), the outgoing target photon is collapsed into the final joined state |ψ⊗φ〉=αγ|H〉t1+αδ|V〉t1+βγ|H〉t2+βδ|V〉t2, which contains all the quantum information of the two input photons. The success rate can be raised to 1/8 by adding a mechanism to transform some of the other outcomes. In our experiments (see Figure 2), we successfully demonstrated quantum joining, although the average fidelity of the process was limited to about 75% by the imperfect indistinguishability of the photons.

In summary, we demonstrated an optical apparatus for transferring the quantum information initially carried by two separate photons into a single one. We also proposed schemes for the inverse operation and for iterating these transfer processes.3 Our next step will be extending this method to other degrees of freedom, such as the orbital angular momentum of photons.4 These schemes for multiplexing the quantum information across photons, despite having a relatively low success probability, may already find application in quantum communication or interfacing with atomic memories, when high losses are involved. If recent work toward achieving gigantic nonlinear interactions among photons succeeds,5, 6 deterministic schemes should also become possible, likely making photon multiplexing/demultiplexing an important resource for future quantum communication networks.

This work was supported by the Future Emerging Technologies FET-Open Program, within the Seventh Framework Programme of the European Commission, under Grant No. 255914 (PHORBITECH), and by the Futuro in Ricerca project HYTEQ.