Optical technologies are currently employed for data transmission in a wide range of systems, from long-haul to access networks. Application areas have recently extended to encompass transmission over shorter distances, such as rack-to-rack interconnects at data centers and in supercomputers. This expansion in applicability is thanks to the advantages provided by optical interconnects, in both capacity and power consumption, compared with their electrical counterparts. For short-distance interconnects, the development of the vertical-cavity surface-emitting laser (VCSEL) was essential. The operating energy of VCSELs is as much as ten times lower than that of edge-emitting lasers. With internet traffic currently increasing at an exponential rate, the throughput of micro-processing units (MPUs) in servers and routers must be increased, and power consumption reduced, to cope with requirements. The demand for chip-to-chip and on-chip optical interconnects is therefore on the rise. 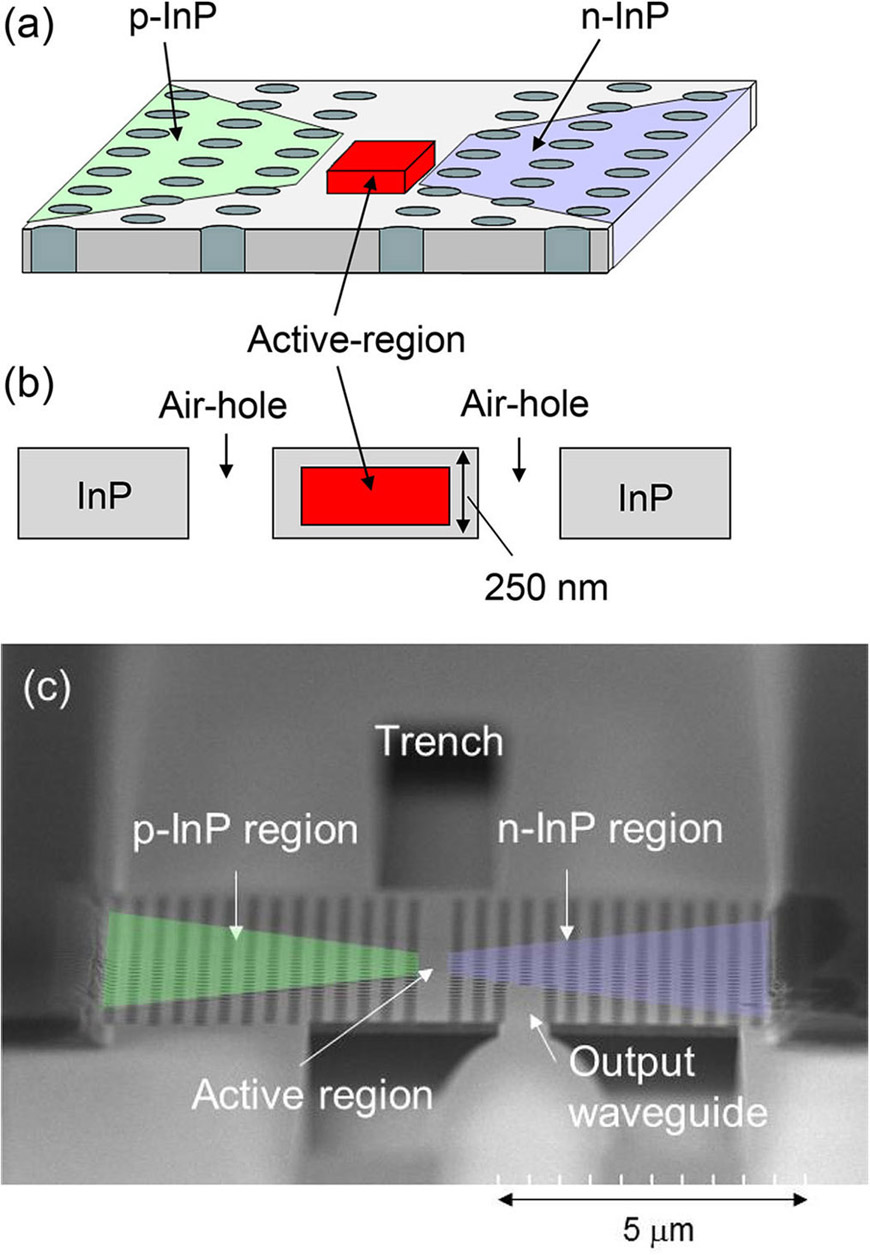 Figure 1. Schematic diagrams of the photonic crystal nanocavity laser. (a) Top view and (b) cross-sectional view. We employ an ultra-compact buried heterostructure in which the active region is embedded in an indium phosphide (InP)-based line-defect waveguide to improve the device performance. The device is perforated with periodic air holes, and the line-defect is formed by removing a row of air holes through the central active region. (c) Scanning electron microscopy image of our device, with the output waveguide location indicated. The lateral current injection structure is fabricated using silicon-ion implantation and zinc thermal diffusion to cause p- and n-type doping, respectively.

Reducing the operating energy of directly modulated lasers is a key step toward employing optical technologies in these areas. By 2022, the required energy cost of transmitters will be less than 34 and 7 femto-Joules per bit (fJ/bit) for chip-to-chip and on-chip interconnects, respectively.1 Since the operating energy is inversely proportional to the active volume of the laser, many research groups have been trying to fabricate an electrically driven photonic crystal (PhC) nanocavity laser. However, due to large thermal and electrical resistance, their performance has thus far been very limited. 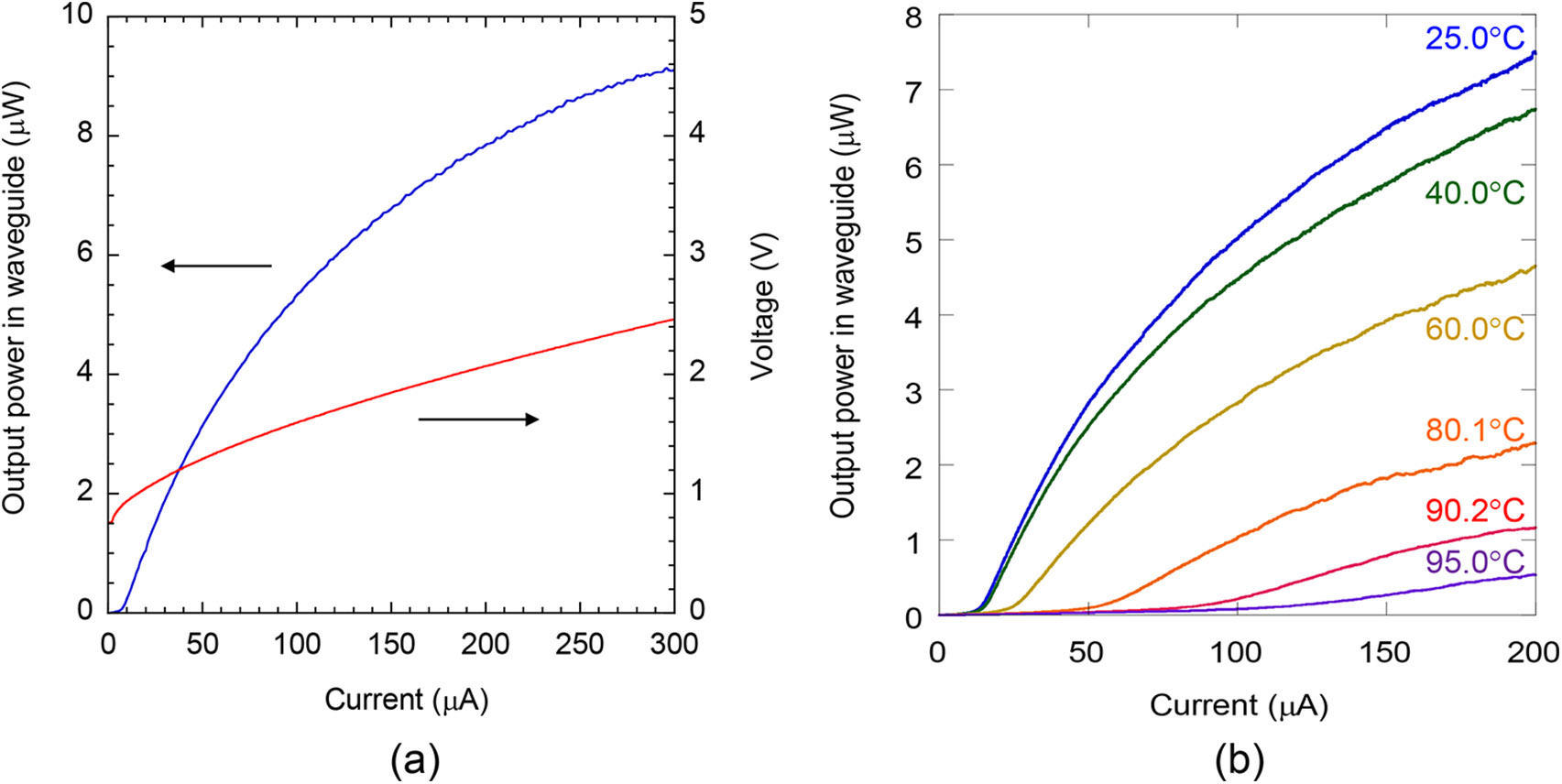 Realizing a PhC laser with ultra-low operating energy is made possible by implementing a buried heterostructure2 in which the wavelength-scale active region is embedded in an indium phosphide (InP) PhC slab (see Figure 1). We call this laser a lambda-scale embedded active-region (LEAP) PhC laser. The combination of the PhC nanocavity and buried heterostructure allow for effective confinement of both charge carriers and photons in the active region (due to the larger bandgap and lower refractive index of InP, respectively), and an improved thermal conductivity. Because of the thin (250nm) membrane of the LEAP laser, we employ a lateral current injection structure in which electrons and holes are injected from the doped regions into the active region, where they recombine to produce photons.3 The areas for silicon-ion implantation and zinc thermal diffusion are defined using photolithography, resulting in selective p- and n-type doping in the InP layer. These fabrication techniques are the same as those used in traditional silicon complementary metal-oxide-semiconductor technology, making this method suitable for large-scale integration.

A scanning electron microscopy (SEM) image of a fabricated LEAP laser is shown in Figure 1(c). The active region comprises three indium gallium aluminum arsenide-based quantum wells with dimensions 2.6μm × 0.3μm × 0.15μm. A periodic array of air holes can be seen at either side of the active region, with a line absent of air holes at the center of the photonic crystal structure. The resulting structure is called a line-defect waveguide, in which light is confined to the central active region due to the air holes on either side. To obtain high coupling efficiency between the cavity and output waveguide, we shifted the direction of the output waveguide with respect to the line-defect waveguide.

We subjected the fabricated electrically driven LEAP laser to continuous-wave (CW) operation at room temperature. The light and voltage versus current characteristics are shown in Figure 2(a). We collected the laser output light from an output line-defect waveguide into a single-mode fiber with a 10dB coupling loss. The device exhibited a clear kink at a threshold of 7.8μA, indicating lasing operation. With an injection current of 300μA, the output power coupled to the output line-defect waveguide was 9.3μW. Using the temperature-dependent refractive index change in InP-based material, we calculated that the active region temperature reached 16K with an injection current of 300μA.4 The dependence of the light versus current characteristics on the injection current is shown at various heatsink temperatures, ranging from 25 to 95°C, in Figure 2(b). High-temperature operation is required due to the peak surface temperatures (80°C) in MPUs. When the fabricated device was operated at a high heatsink temperature of 95°C, we observed a lasing threshold of about 120μA. These results indicate that the buried InP layer effectively suppresses the increase in the active region temperature, even in the electrically driven device.

To reduce the operating energy, it is important to achieve a high modulation efficiency (described by the gross bit rate divided by the bandwidth). The LEAP laser has an advantage in terms of modulation efficiency because the lateral p-i-n diode structure increases the optical confinement in the active region and decreases parasitic capacitance. The small-signal responses of the fabricated LEAP laser for bias current, ranging from 25 to 200μA, are shown in Figure 3(a). Devices such as these are usually operated with a 50Ω termination, which enables impedance matching. However, due to the small capacitance of our device, the impedance mismatch between the driver and the fabricated device is suppressed. An air coplanar probe was used to inject the high-speed modulated electrical signal. The 3dB bandwidth was seen to increase with bias current: see Figure 3(b). A 3dB bandwidth of 10GHz was achieved with a bias current of 46μA, and a maximum of 16.2GHz was reached with a bias current of 200μA. In our calculation of the energy cost (the product of the bias current and voltage divided by the pulse width of a single bit), we assumed a modulation speed of 1.3 times the 3dB modulation bandwidth.5 As shown in Figure 3(b), we can expect an energy cost of less than 10fJ/bit when the bias current is less than 84μA.

In summary, by embedding the wavelength-scale active region in an InP PhC slab, we were able to achieve a directly modulated laser with 10fJ/bit operating energy. We experimentally demonstrated a low threshold current of 7.8μA and 3dB bandwidth of 10GHz with a bias current of 46μA. In the future, we plan to increase the output power and improve the temperature characteristics by optimizing the device structure. Furthermore, we aim to realize a large-scale photonic integrated circuit that can be used for optical communications in chip-to-chip and on-chip interconnects.