In the United States, one in eight women can expect to be diagnosed with breast cancer within her lifetime. Treatment of breast cancer often involves mastectomy, the surgical removal of the breast(s). Women at heightened risk may also elect to undergo mastectomy to reduce the chances of developing breast cancer. Many women who undergo a mastectomy have concerns about their body image—i.e., how they view their appearance and the overall functioning of their body. The goal of breast reconstruction is to recreate the appearance of the patient's breasts in a way that restores her body image.

Breast reconstruction typically requires multiple procedures over time to obtain a final result. Many women are candidates for more than one form of breast reconstruction, such as reconstruction using either an implant or some of the patient's own tissue (autologous reconstruction). There are a large number of factors a woman must consider when making her treatment decisions, including time, cost, and body-image preferences. For a woman to make optimal decisions about breast reconstruction, she needs some very specific information to understand her surgical options and how her preferences, including her appearance after the surgery, can best be met. This article describes our approach to quantifying a patient's appearance via imaging and 3D modeling techniques.1–11 We note, however, that developing a greater understanding of patient preferences in terms of quality-of-life measures such as body image12 and modeling the decision-making process for breast reconstruction13 are equally important aspects of our research program.

To extract relevant information about appearance changes, we analyzed both 2D and 3D surface images to quantify the appearance of the female breast and any changes it undergoes, and to develop patient-specific mechanistic models to predict realistic outcomes. Imaging in 2D that consists of clinical photographs with a standardized background and poses is currently the customary practice for documenting surgical outcomes. We achieved the 3D surface imaging via a stereophotography system from 3dMD, a medical imaging company in Atlanta, GA. We find 3D surface imaging of the breast14 advantageous both because it enables us to measure properties such as curvature and volume that are more difficult to assess from 2D imaging and because 3D measurements retain their validity despite changes in the subject's pose.15

We computed measurements of breast morphology such as symmetry2,5,8 using distances between fiducial points—natural markers in the image that orient to specific areas—including the nipples, the sternal notch, and the umbilicus. We considered a range of aesthetic properties, not simply measures of symmetry and volume.16 For example, we have introduced measures of ptosis1, 3 (the drape of the breast), scarring,6 and curvature.9, 10 With such measurements, we can investigate surgical options that include different types of mastectomies6 and reconstruction procedures.9,10 Our goal is to streamline our analyses through techniques such as development of algorithms that automatically align images to a defined orientation4 and locate fiducial points.5, 7,11 For example, we have developed accurate methods for fiducial point localization using 3D surface-curvature analysis coupled with 2D texture analysis (see Figure 1). 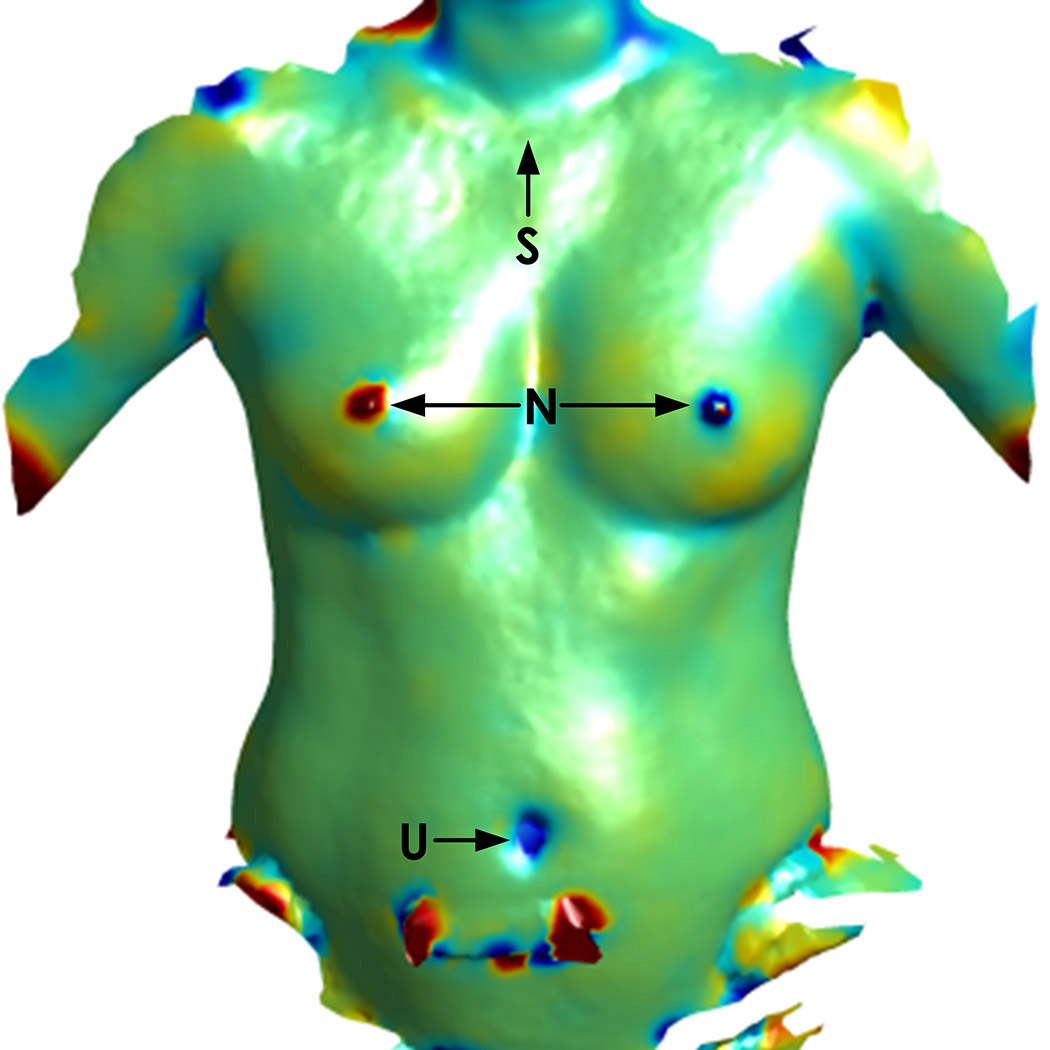 Figure 1. Surface-curvature analysis produces automated identification of the sternal notch (S), nipples (N), and umbilicus (U). These fiducial points can be used to calculate quantitative measures such as symmetry. Figure prepared by Manas Kawale.

A key next step in our research is assessing changes in breast morphology over the course of reconstruction. To conduct longitudinal analyses, it is critical to register 3D images taken at different time points. Toward this goal, we have developed a semi-automated algorithm for registration of multiple images taken over time based on the assumption that the skeleton is relatively stable and thus the transformation can be treated as rigid.17

In a highly innovative component of our current work, we are developing a physics-based, patient-specific biomechanical model that uses the 3D geometry obtained via 3D surface imaging combined with the material properties of the breast to predict breast reconstruction post-operative results (see Figure 2). This represents a new approach because there are few previous studies on the physical properties of the human breast such as skin thickness and deformation18 or pectoral muscle thickness and curvature.19 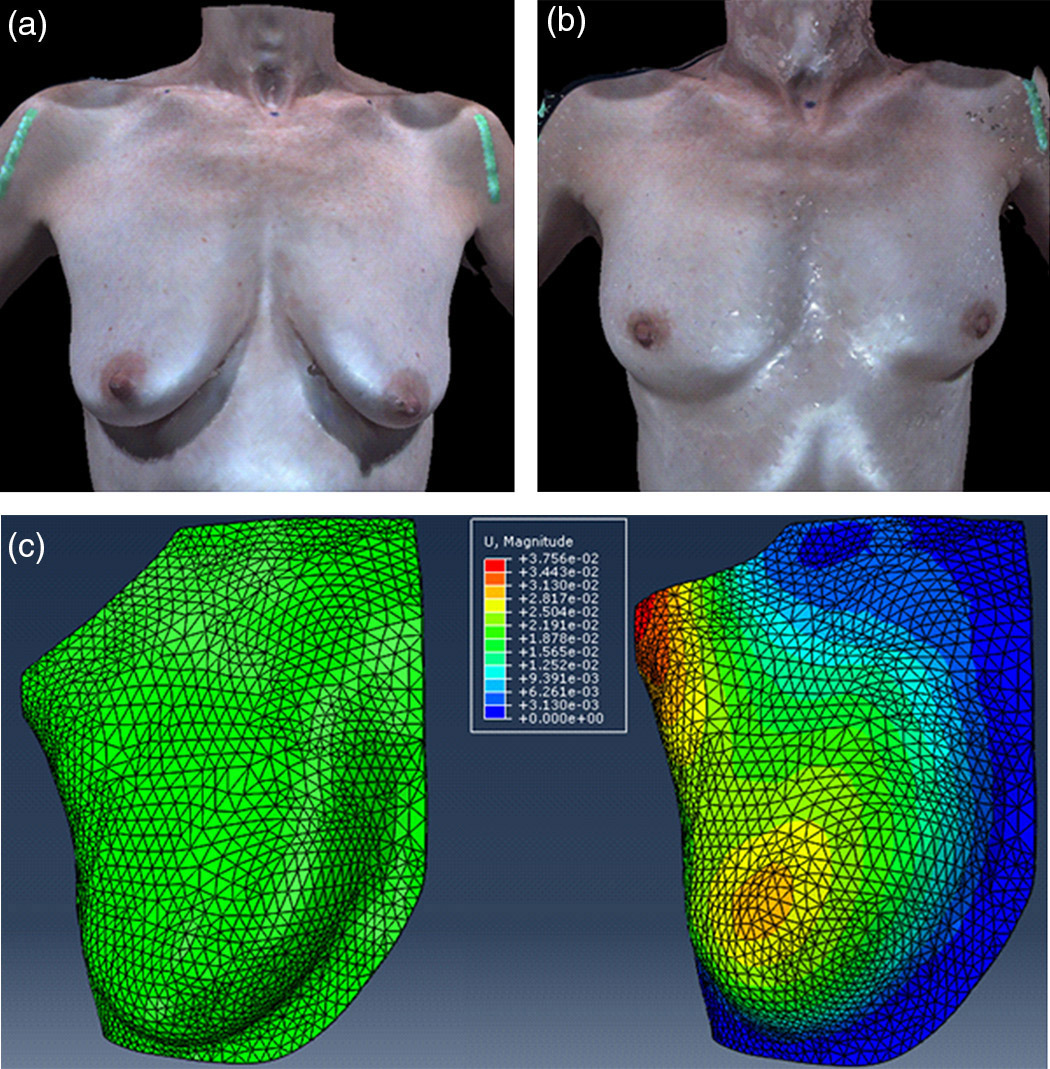 Our progress in developing methods for measuring breast morphology and creating a patient-specific 3D prediction model will enable us to provide highly valuable quantitative feedback. Through the integration of breast aesthetics, body-image measurements, and biomechanical modeling into a decision-analysis framework, we hope to more fully inform both patient and surgeon of possible outcomes. Ultimately, our goal is to design a decision support system to help breast cancer survivors understand their likely appearance changes following breast reconstruction and enable them to choose a reconstruction strategy that will result in maximum psychosocial adjustment.

The authors gratefully acknowledge the support of the National Institutes of Health (Grant R01CA143190) and the American Cancer Society (Grant RSGPB-09-157-01-CPPB).

Clement S. Sun is a doctoral candidate in the Department of Biomedical Engineering and a medical student at The University of Texas Medical Branch focused on breast reconstruction decision-making. He has bachelor's and master's degrees in electrical engineering from the University of Washington.

Fatima A. Merchant is an assistant professor with joint appointments in computer science, electrical and computer engineering, and biomedical engineering. Her research interests are in the areas of tissue engineering, computational cytogenetics, and multidimensional imaging and image analysis.

K. Ravi-Chandar is a professor of aerospace engineering and engineering mechanics and was previously a professor at the University of Houston. He is also associate director of the Center for Mechanics of Solids, Structures, and Materials and editor of the International Journal of Fracture.

Michelle C. Fingeret is an assistant professor with joint appointments in the Departments of Plastic Surgery and Head and Neck Surgery. She is a licensed psychologist and has developed an innovative line of research centering on body-image issues for oncology patients.

Gregory P. Reece earned his BS in zoology from McNeese State University and his MD from Louisiana State Medical School. As a professor in the Department of Plastic Surgery, his primary research interest is the application of imaging technology to facilitate surgery and to quantify outcomes after reconstructive surgery.