Solar cells, or photovoltaic (PV) devices, offer a promising source of clean and sustainable renewable energy, but can be expensive to fabricate. One cost-effective approach is to use organic PV materials (OPVs) in a solution that can be sprayed, like inexpensive paint, or printed over large areas on rigid or flexible substrates. However, because of the poor electrical conductivity of most organic materials, OPVs are inherently very thin, leading to poor solar light absorption and low power conversion efficiency (PCE). The challenge is to increase light absorption without altering the thickness of an OPV device.

To improve PV light trapping, developers consider surface plasmon polaritons (SPPs), which are collective oscillations of electromagnetic waves and free electrons strongly confined at metal/dielectric or semiconductor interfaces.1 Their decay lengths fall in the range of tens to hundreds of nanometers in the visible and near-IR spectral regions, and match the thickness of the active light-harvesting layer(s) of a typical OPV. Hence, plasmonic nanostructures have the potential to enhance light absorption in OPV devices. Studies of the fundamental limits of light trapping and thermodynamic limits in solar cells show that very high efficiency PVs are achievable.2 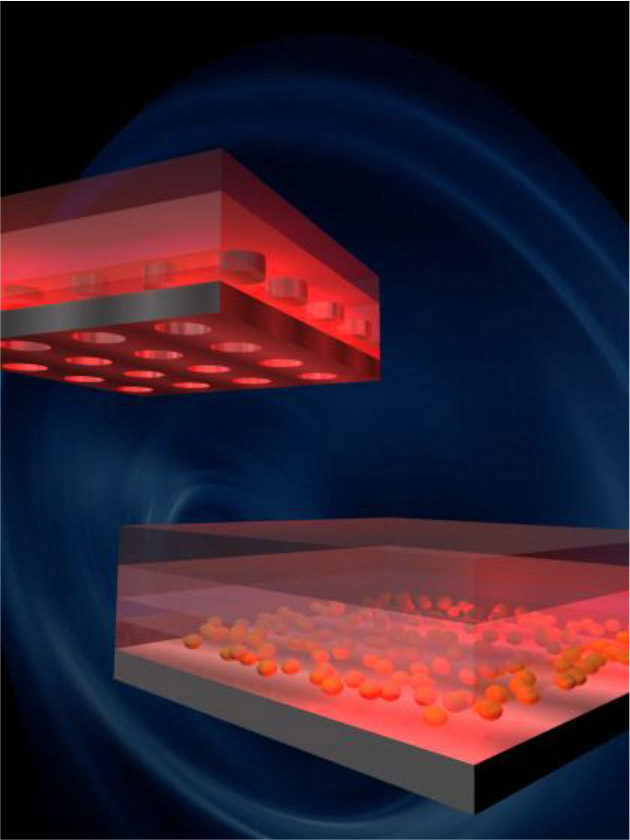 Extensive investigations of surface plasmons have been carried out using metallic nanostructures (silver, gold, and aluminum) to improve the PCE of inorganic3 and organic4 PV devices. Materials used for inorganic PVs—silicon, for example—have large refractive indices, which lead to extremely small SPP decay lengths (tens of nanometers). Since inorganic PVs are typically a few micrometers thick, this light-trapping approach using surface plasmons is not very effective in improving their PCE. Compared with its inorganic counterpart, the active light-harvesting layer of an OPV is intrinsically thin (a few nanometers to tens of nanometers) and has a small refractive index, yielding better overlap of the SPP resonance with the solar spectrum. Light trapping using this approach offers the possibility of PCEs that significantly surpass experimentally achieved records in OPV devices with no plasmonic nanostructures.

Two main types of patterned nanostructures are frequently used in plasmonic OPVs: randomly distributed metallic nanoparticles, and periodic metallic nanopatterned arrays of one, two, and (quasi) three dimensions (see Figure 1). Key issues relating to the practical use of these structures include broadening of the solar absorption band and its extension to the near-IR region, achieving polarization insensitive/independent plasmonic nanostructures, and omnidirectional absorption enhancement (large angular tolerance). Metallic plasmonic nanostructures can be integrated with one or two of the electrodes of an OPV device to beneficial effect. Finally, introducing the plasmonic nanostructures at different positions (for example, on the top surface, back reflector, or inside the active layer) within the OPV device has varied implications for performance.4

Building on our earlier investigation of optical absorption in polymeric OPVs, we theoretically studied absorption enhancement by a thin-film bottom metal nanohole array supporting short-range SPPs.5 The advantage is that the bandwidth of these SPPs is intrinsically broader than the one for SPPs supported at optically thick single metal surfaces,6 which is highly desirable for solar energy harvesting applications. To achieve a broader tunability of the absorption enhancement, we also designed a double plasmonic nanostructure in molecular OPVs.7 This sandwich structure consisted of a periodic array of metallic nanodiscs on one side of the OPV active layer(s) and a thin metal nanohole array on the other side. Excitation of the coupled modes of localized SPPs at the nanodiscs and short-range SPPs at the nanohole array caused the electromagnetic field to be highly concentrated within the organic active layers, leading to a polarization-independent, broadband absorption enhancement in the visible and near-IR portion of the solar spectrum. We calculated the broadband spectral absorptivity of the active layers introduced by the plasmonic nanostructures, explored the tunability of the absorption enhancement, and investigated its effect on the device performance. Our calculations showed that an optimized double plasmonic nanostructure can enhance the total photon absorption by >125% for molecular OPVs compared with a reference OPV with no plasmonic nanostructure.

In summary, incorporating metallic plasmonic nanostructures within OPV devices could enhance their PCE beyond the currently achievable 12%.8 It should be noted that the enhanced performance reported for many plasmon-assisted OPVs is much lower than the record high PCEs experimentally achieved to date. Potential challenges include non-radiative decay, charge-carrier recombination, and quenching of excitons. We predict that a renewed focus on the science and technology of nanophotonics for light management and trapping in OPVs will lead to further progress, and to OPVs with PCEs surpassing currently achieved performance levels. To achieve better performance in future OPV devices, optical enhancement of the absorption in thinner active layers is highly desirable. As a next step, our future research will explore this potential using recently emerging thin-film plasmonic and metamaterial super-absorber structures consisting of patterned metal/ultra-thin-semiconductor/metal films.9

Qiaoqiang Gan is an assistant professor in the Electrical Engineering Department. He is the author or co-author of more than 60 refereed journal papers. His current research interests include nanophotonics, plasmonics for energy, and biophotonics.

Filbert Bartoli is the Chandler Weaver chair and ECE chair at Lehigh University. He is a fellow of the Optical Society (OSA) and the IEEE, and recently was IEEE Photonics Society vice president for finance and editor-in-chief of the IEEE Journal of Selected Topics in Quantum Electronics. His current research interests include nanophotonics and plasmonics for biosensors and energy.

Zakya Kafafi is former director of the Division of Materials Research. She is the founding editor-in-chief of the Journal of Photonics for Energy, a member of the American Chemical Society, Materials Research Society, Sigma Xi, and a fellow of the American Association for the Advancement of Science, OSA, and SPIE. Her research interests are in organic electronics and photonics.