Photovoltaic (PV) and solar thermal systems use solar energy to generate electricity and heat, respectively, but exploit less than 25% of the sun's rays. To increase electrical output, triple-junction (3J) PV cells convert solar radiation into power across three separate stacked semiconductor junctions that absorb light at different wavelengths. These cells enable cumulative voltages and greater efficiencies than are possible from single-junction cells. However, 3J devices are expensive, and the materials are not available in sufficient quantities for use in flat panels. Even in concentrated PV systems (CPVs), which use a smaller number of cells, 3J cells increase the overall cost. We combined PV and solar thermal techniques in a high-concentration PV thermal (HCPVT) system to achieve efficient electrical output without the need for extra cells. Our approach also employs waste heat for cooling and water desalination, making the system highly efficient.

A hot-water-cooled multichip receiver (MCR), mounted in the focal point of a parabolic concentrator, generates both heat and electricity. PV thermal concentrators produce electrical energy with an efficiency of >25%. The remaining ∼50% of the heat can be used for heating, desalination, or adsorption cooling (see Figure 1). Therefore, the overall efficiency is greater than 75%. The use of 2000-fold concentrated solar radiation reduces the number of 3J PV cells needed. 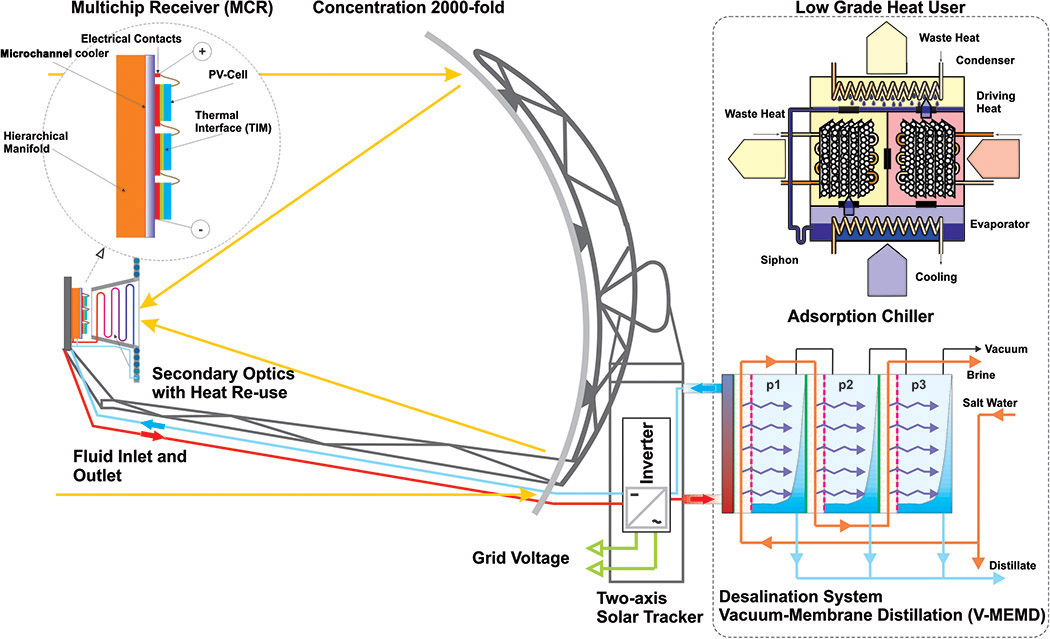 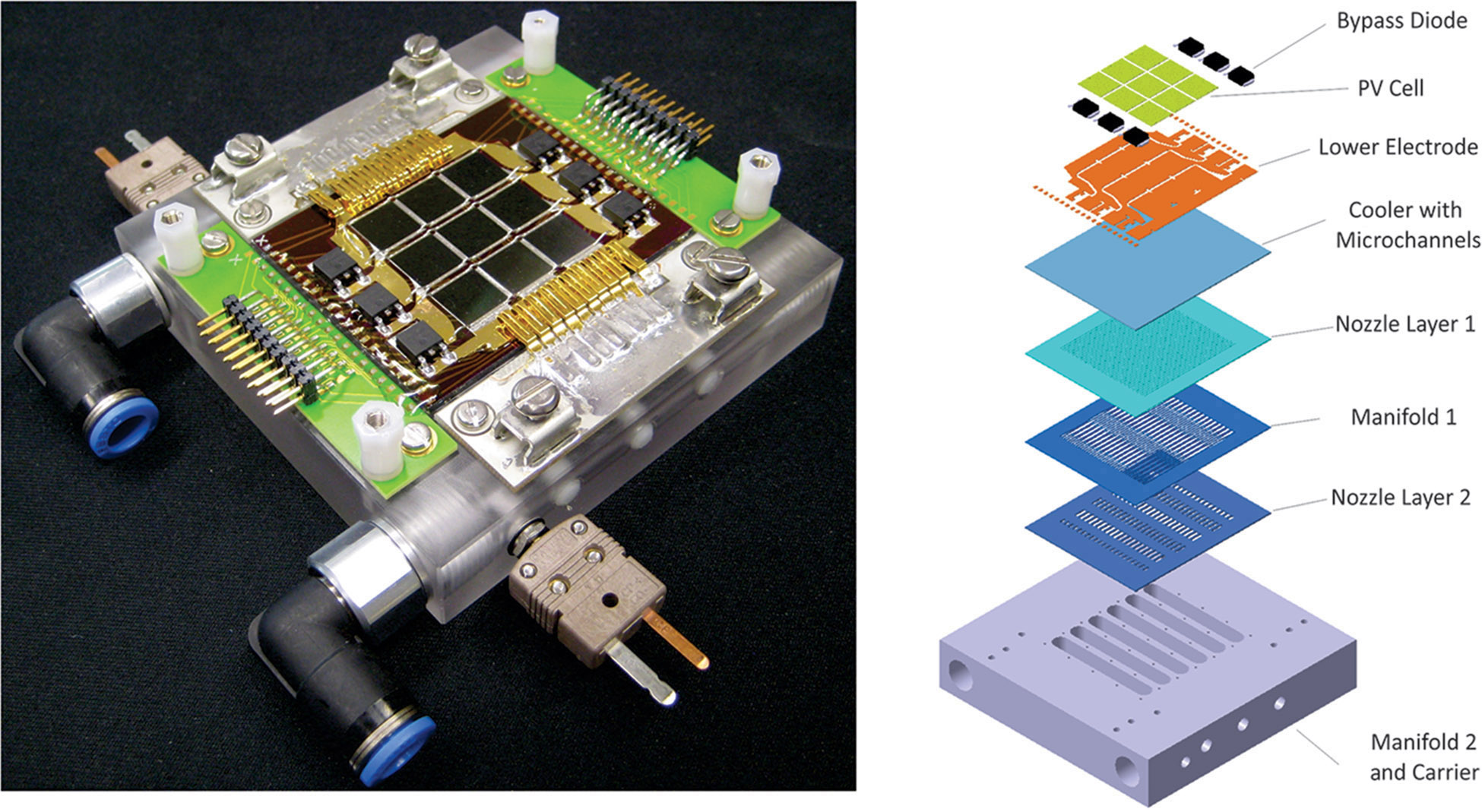 We used hot-water-cooled silicon microchannel coolers, which have extremely low thermal resistance, allowing cooling of PV cells at 100°C with water at 90°C and at a concentration equivalent to 2000 suns (see Figure 2). The HCPVT system uses a primary parabolic mirror that concentrates the sunlight through a secondary optics onto the MCR (see Figures 1 and 2). The water-cooled optics protect the device and enable a very homogeneous illumination. The MCR provides electrical energy for the grid and hot water for running an adsorption cooler and/or a membrane distillation setup for desalination. We mounted a 3×3 array of commercially available 3J PV cells on a common cooler. We built a microchannel cooler directly into the substrate to ensure good electrical contacts, mechanical integrity, and thermal contacts through a thermal interface. A hierarchically branched liquid network minimized the pumping energy and reduced the thermal resistance to less than 0.12K/cm2W. Moreover, the MCR features matched expansion coefficients, resulting in high levels of reliability and durability, and allowing concentrations of up to 4930 suns.1 The cells in rows were connected in parallel, whereas the rows were connected in series, secured on both sides with bypass diodes. 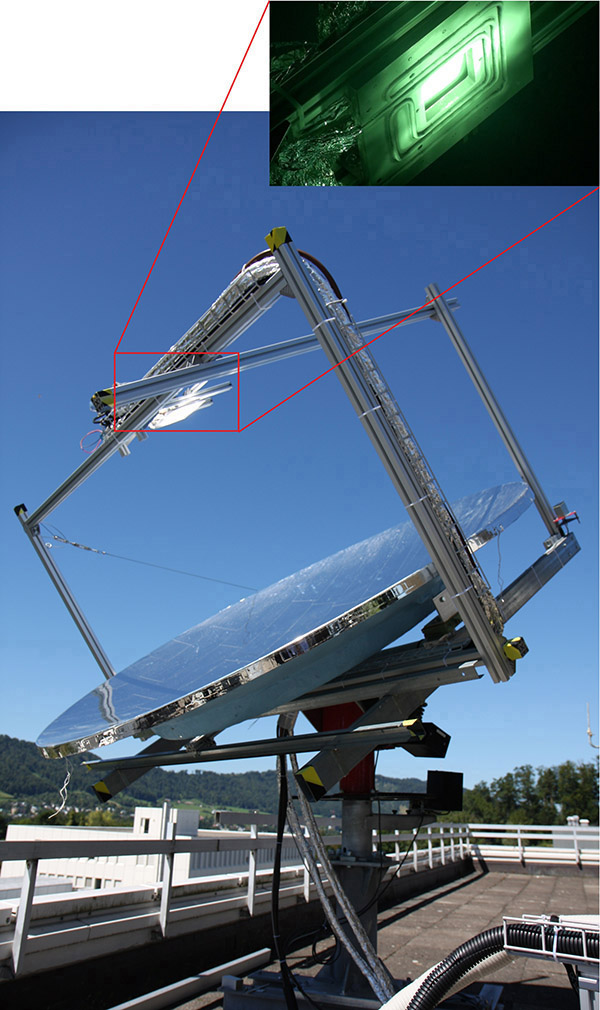 Figure 3. A low-cost parabolic dish concentrator system with MCR and thermal receiver with a matched aperture.

We tested the thermal and electrical system efficiencies under outdoor conditions in the focal spot of a small 2D sun tracker (see Figure 3). The advantage of HCPVT systems over flat-plate PVs or CPVs is not only their dual output of heat and electrical energy but also their higher exergy efficiency. Exergy is the maximum useful work when bringing a thermodynamic system into equilibrium with a heat reservoir. Because exergy is destroyed in temperature changes, a good understanding of this concept is important for more efficient use of energy. Flat-plate PV systems exhibit reduced yield at higher temperatures, while HCPVT systems become more effective with increased solar concentration.2 A direct conversion into electrical energy by means of an organic Rankine cycle (heat recovery) would result in 8–12% added efficiency. But direct use of heat for cooling and desalination enables an overall increase of 20–30%. HCPVT systems are advantageous in hot and dry areas with large direct normal irradiance (DNI), that is, with DNI>2000kWh/(m2a),3 and will soon be able to generate power at a price equal to, or less than, electricity available from the grid.4 Cheap storage of low-grade heat, by means of a layered hot water tank, enables a predictable output of heating, cooling, and desalinated water.5

According to the International Energy Agency, global demand for cooling will triple by 2050 because of population growth, economic development, and climate change.6 Heat-driven sorption cooling, converting low-temperature heat (90–120°C) into cold (10°C), can help to address this need. Heat from HCPVT systems can also be employed for desalination using, for example, vacuum multi-effect membrane distillation,7 and HCPVT will help ensure power grid stability, even in transmission networks that contain many solar power plants with unpredictable output.

In future work, we plan to enhance the system by incorporating an efficient, low-cost 100m2 faceted mirror with a 500cm2 receiver, using concrete, steel, and silicon.

Bruno Michel received a PhD in biophysics from the University of Zurich and subsequently joined IBM Research to work on scanning probe microscopy and soft lithography. He started the Advanced Thermal Packaging group to improve thermal interfaces and miniaturized convective cooling for processors and concentrated PV systems.

Stephan Paredes received his bachelor's degree in systems engineering, majored in physics engineering, and received a post-diploma degree in optical systems engineering from the University of Applied Science NTB in Buchs, Switzerland. In 2008 he joined IBM Research, where he now works in the Advanced Thermal Packaging Group on microprocessor liquid cooling, improved thermal interfaces, and concentrated PVs.