Organic photovoltaics (OPVs) are a promising alternative to inorganic photovoltaics because they are made out of cheaper and non-toxic materials combined with low-energy and low-cost processing techniques. However, large energy losses between the optical gaps of the absorbing materials and the open-circuit voltage (VOC) limit how efficiently these OPVs convert solar energy into electricity.

Materials used in OPVs commonly have optical gaps of between 1.7 and 2.1eV. However, the VOC seldom exceeds 1.0eV. This difference between the optical gap and qVOC, the potential energy at open-circuit voltage, represents a loss of almost half the photon's original energy. In contrast, inorganic photovoltaic cells,

such as polycrystalline silicon, gallium arsenide, and copper indium gallium selenide, show a difference of only 0.3–0.45eV between the material bandgap and qVOC. For OPVs to reach higher power conversion efficiencies (PCEs), these energy losses must be decreased and the VOC increased. This requires a better understanding of the origin of VOC and energy-loss mechanisms.

Figure 1. Chemical structures of the donor materials used in the organic photovoltaic devices reported in this article, tetracene and rubrene.

Reduced electronic coupling has previously been considered an explanation for increases in the VOC. Using the charge-transfer state contribution to the external quantum efficiency allows for a deeper look at electronic coupling between donor and acceptor in the model systems of tetracene/C60 and rubrene/C60 bilayer OPVs. Owing to their energetic and structural similarities (see Figure 1), along with a previously reported large VOC difference of 0.37V, these material systems provide an ideal platform to study the effects of sterics and electronic coupling on VOC.

Analysis of these systems reveals that VOC differences correspond directly with those of charge-transfer state energy (ECT), with little or no influence from electronic coupling.1 This result is consistent with trends where the qVOC correlates linearly with ECT (see Figure 2). Moreover, electronic coupling differences can be attributed to the edge-on and face-on orientations adopted by tetracene and rubrene, respectively. This is based on near-edge x-ray absorbance fine-structure spectroscopy and grazing incidence x-ray-scattering measurements to probe molecular orientation. 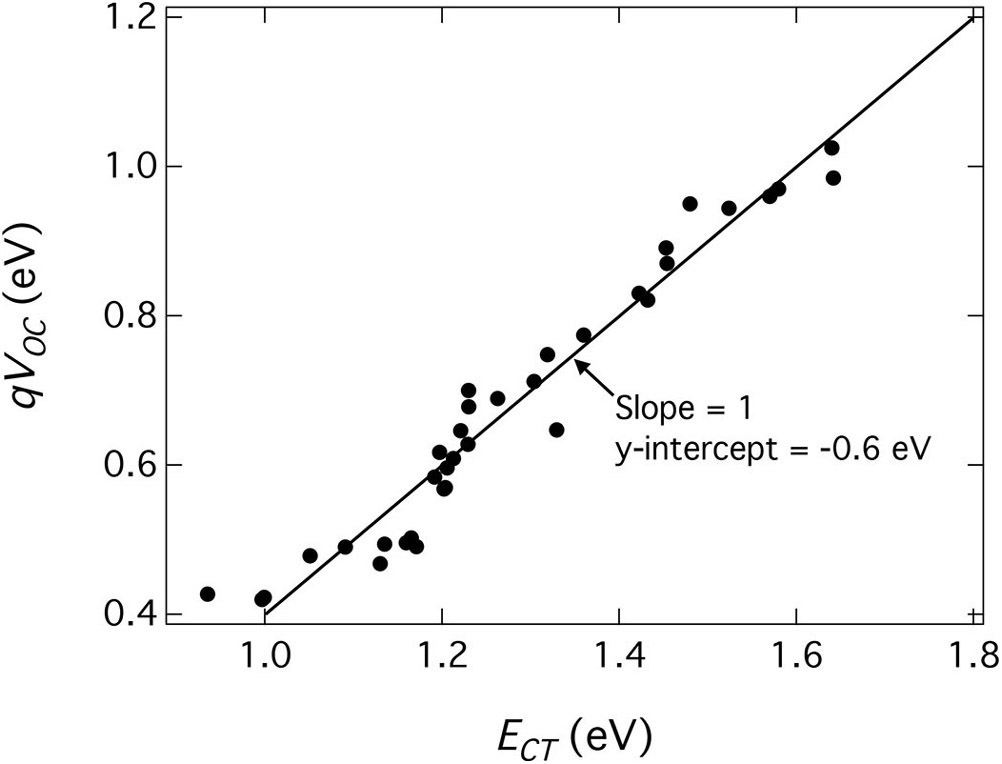 With the VOC determined largely by ECT, this energy must be increased to increase the VOC. We probed the highest occupied molecular orbital levels and ECT of both crystalline and amorphous systems to find out what determines ECT. Results show that ECT is influenced by the difference between the highest occupied and lowest unoccupied molecular orbital levels, as well as other factors, including the extent of crystallinity, donor-acceptor orientation, and interfacial dipoles.

In summary, our work shows that the VOC is largely determined by ECT, and that ECT must be increased to strengthen the VOC. This highlights the importance of understanding the factors that affect ECT and also suggests that an increased understanding of the VOC is necessary to further minimize voltage losses and increase OPV performance.

In the future, we will continue to work on ways to improve the efficiency of organic solar cells by investigating new ways to maximize the VOC of devices, such as by looking at systems with different degrees of crystallinity and molecular conformation at the donor-acceptor interface.

Aram Amassian is a professor at KAUST working in the fields of solution processing, OPVs, and organic field-effect transistors.