Cosmic rays are extremely high energy—i.e., in excess of 1020eV—elementary particles that consist mostly of protons and alpha particles. The paths of these particles are affected by galactic (and sometimes intergalactic) magnetic fields because they are electrically charged, which means that the direction of their arrival on Earth does not reveal their astronomical origin. Neutrinos are subatomic particles with essentially no mass and no electric charge. As such, their interactions with matter are very weak. High-energy neutrinos are therefore thought to be ideal for ‘extreme astronomy’ as they can travel unscathed from the edge of the universe, from the inner neighborhoods of black holes, and from the nuclear furnaces where cosmic rays are thought to be created. However, their weak interactions make neutrinos very difficult to detect. Very large particle detectors are required to collect them in sufficient quantity for scientific analysis.

The IceCube project has transformed a cubic kilometer of natural Antarctic ice into a neutrino detector.1 It is the latest instrument designed to characterize the still enigmatic sources of cosmic rays. When a neutrino directly hits a nucleus in the ice, electrically charged secondary particles are produced that can be detected, rather than the neutrino itself. The secondary particles radiate in a glow of blue light (Cherenkov radiation) that spreads through the transparent ice over hundreds of meters. By mapping the light pool, the flavor, energy, and arrival direction of the neutrino can be constrained. The first evidence from IceCube for an extraterrestrial flux of very high energy neutrinos, some with energies more than three orders of magnitude greater than those produced by earthbound particle accelerators, has recently been presented.2, 3

IceCube was completed in December 2010 and we have since been operating it as a 1000 megaton neutrino detector, consisting of 5160 optical sensors embedded into the Antarctic ice. The success of our IceCube design follows the research and unsuccessful search for cosmic neutrinos from the underground neutrino detectors co-located with the Fréjus and Gran Sasso (in France and Italy, respectively) traffic tunnels.4, 5 However, with these results, and those from the Antarctic Muon and Neutrino Detector Array detector (predecessor and proof-of-concept instrument for IceCube), an upper limit on the flux of neutrinos as a function of energy was established. We collected data during the construction of IceCube that shows with its high sensitivity it should be possible to observe the theorized sources of cosmic rays such as supernova remnants, gamma-ray bursts, and (with larger uncertainty) active galactic nuclei. Now that IceCube is completed, we have positioned it to observe the much-anticipated cosmogenic neutrinos that are produced during the interaction of cosmic rays and microwave photons, and that are expected to have energies greater than one million teraelectronvolts (TeV).

We conducted a dedicated search for cosmogenic neutrinos using IceCube data collected between May 2010 and May 2012. We found two events with energies in the petaelectronvolt (PeV) range, at 1041 and 1141TeV (with negligible statistical and 15% statistical errors) rather than in the super-exaelectronvolt (EeV) range expected for cosmogenic neutrinos. These events were particle showers initiated by neutrinos interacting inside the instrument detector volume. Their light pool of about 100,000 photons extended over more than 500m (see Figure 1). 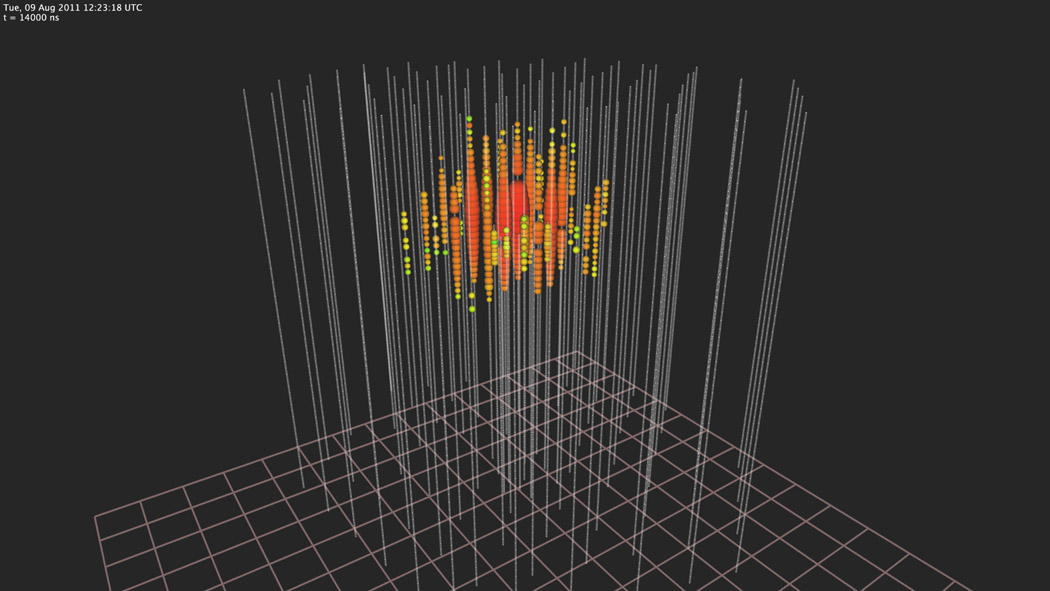 Figure 1. Light pool produced in IceCube by a high-energy neutrino. The measured energy is 1.04PeV (petaelectronvolts), which represents a lower limit on the energy of the neutrino that initiated the shower. The vertical white lines represent the IceCube sensors. The color of the dots indicates arrival time, from red (early) to purple (late) following the rainbow. The size of the dots indicates the number of photons detected.

In the past, neutrino searches have relied on the observation of muon neutrinos that primarily interact outside the detector to produce kilometer-long muon tracks that pass through the instrument volume. Although this creates the opportunity to observe neutrinos interacting outside the detector, it is necessary to use Earth as a filter to remove the large muon background flux produced by cosmic ray interactions in the atmosphere. Neutrino observations are therefore limited to half the sky. After observing the two PeV events, we designed a filter for IceCube to exclusively identify neutrinos that interact inside the detector. The filter divides the instrument volume of ice into an outer veto shield and a 420 megaton inner active volume. We optimized the separation of the veto and signal region to reduce the background of atmospheric muons and neutrinos to about five events each per year. By concentrating only on neutrinos that interact inside the instrument volume of ice, the detector functions as a total absorption calorimeter for energy measurement. In addition, neutrinos from all directions in the sky can be identified, including muon tracks produced in charged-current interactions and secondary showers produced by neutrinos of all flavors. 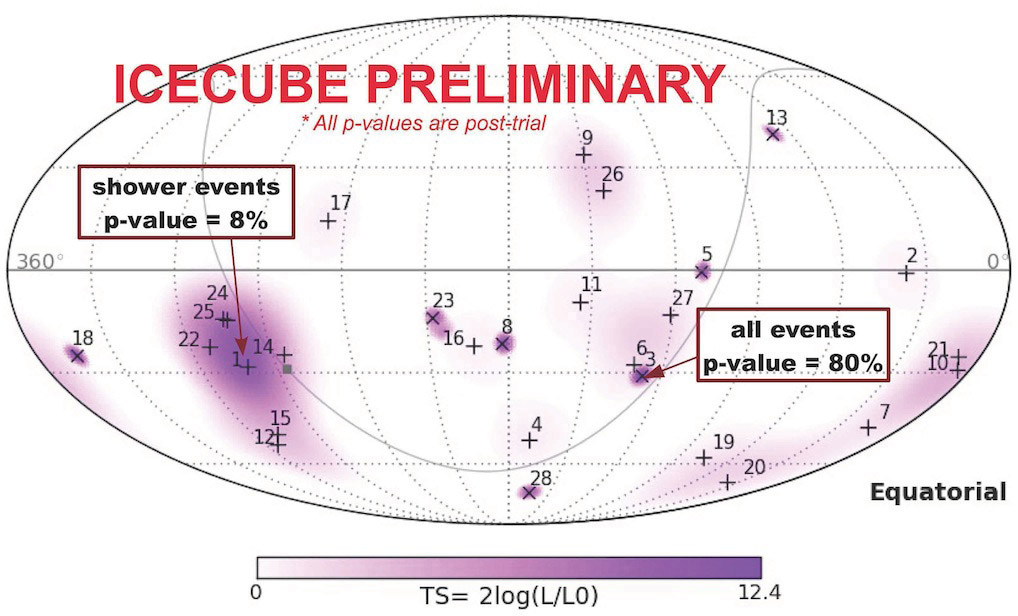 Figure 2. Skymap in equatorial coordinates of the test statistic (TS) that measures the probability of clustering among the 28 observed neutrino events. The galactic plane is shown as a gray line with the galactic center denoted as a filled gray square. Best-fit locations of individual events are indicated with vertical crosses (+) for showers and angled crosses (×) for muon tracks.

We identified 28 neutrino events in the same two-year data set used to search for cosmogenic neutrinos (see Figure 2), which includes the two PeV events. These events had in-detector deposited energies of 30–1200TeV, with 21 having energy reconstructions of better than 15% yet with poor angular resolutions (10–15°). The remaining seven detections were muon events, which allow for sub-degree angular reconstruction but that are difficult to separate from the atmospheric background. The signal represents an excess over background of more than four standard deviations, i.e., there is more than 99.99% probability that they do not represent atmospheric neutrinos. By fitting our data to a combined extraterrestrial flux and atmospheric background, we calculate a neutrino flux that agrees with predictions of the level that would be produced from potential astronomical sources that accelerate cosmic rays.

The IceCube cosmic ray detector in Antarctica has been operating for over two years. Almost 30 neutrino events have now been detected. Although the astrophysical sources of these neutrinos cannot yet be conclusively identified, we are currently working to improve our analyses by accounting for potential biases in the data set.

Francis Halzen is the principal investigator of IceCube and the Hilldale and Gregory Breit Professor of Physics.