Localized deposition and etching of semiconducting materials are important in device research for quantum computers and information processing systems. As an example, lithography and deposition enable construction of two coupled quantum dots (semiconductor nanoparticles) near a single-electron transistor channel for performing manipulations of quantum-bit information (see Figure 1). However, realizing such devices is difficult, even with the most advanced electron-beam lithography techniques: the distances between the various parts are on a nanometer scale, and there are stringent requirements on the properties of the devices' semiconducting and insulating regions.1Currently, such technologies are realized by a combination of top-down lithography and bottom-up techniques, such as multiple oxidation steps to ‘form’ quantum dots near the channel. But these methods rely heavily on chance.

One possibility for controlling the process is to use high-resolution atomic force or scanning tunneling microscopes (AFMs and STMs) to deposit the quantum dots exactly where they are required. AFMs and STMs have been used to demonstrate modification or deposition of atoms or nanoscale regions on different surfaces.2, 3 We have been working on methods that use atomic force microscopy to deposit and etch a variety of electronic materials on arbitrary surfaces with nanometer-scale precision.4–7 We designed special AFM probes (see Figure 2) with integrated channels to bring precursor gases such as silicon tetrachloride (SiCl4), silane (SiH4), and germane (GeH4) to the apex of the AFM tip, where electric fields generated by metallic electrodes create localized plasmas to decompose and deposit silicon and germanium under the tip (see Figure 3). Using plasmas of etchant gases such as sulfur hexafluoride (SF6), we employed the same functionalized probe to etch nanometer-scale spots to define barriers, or to ‘correct’ and etch: see Figure 3(b). Our technique takes advantage of the unique capabilities of atomic force microscopy in imaging and metrology to locate the exact deposition or etch sites in a fabricated device or circuit. It is a 3D nanofabrication method capable of depositing a wide range of materials on substrates with arbitrary contours, ranging from polymers to ceramics. 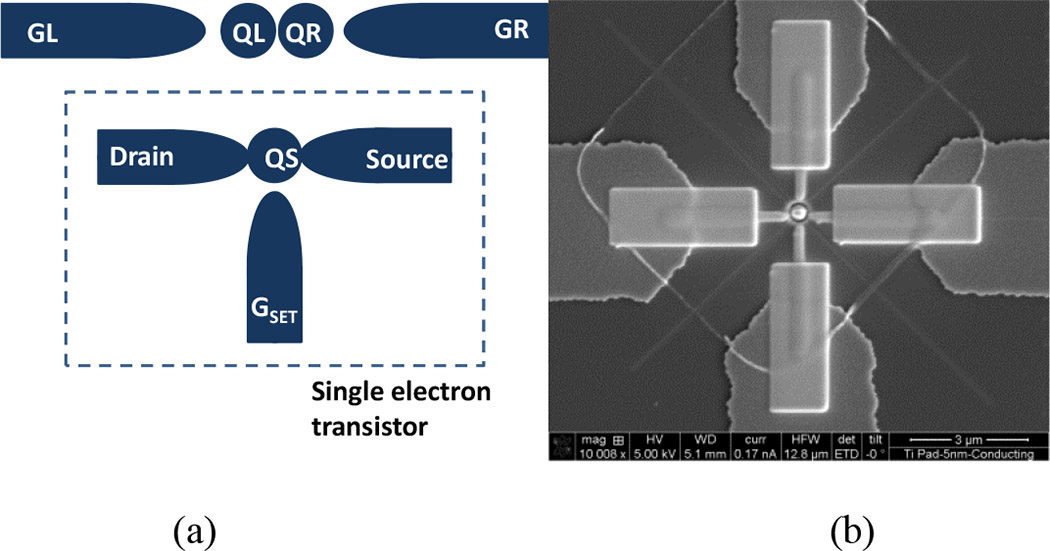 Figure 1. (a) A single-electron transistor (SET) coupled to two inter-acting quantum dots (QL, QR) for quantum-bit (Q-bit) generation and manipulation. GL and GR are electrodes. The distance between the coupled quantum dots and SET is nanometer scale, with intervening very large band-gap oxides to provide the high barrier necessary for operation at room temperature. (b) An example of a Q-bit device fabricated by our group using a combination of optical lithography, focused ion-beam deposition, and atomic force microscope (AFM)-assisted chemical vapor deposition (CVD) of a quantum dot in the middle. QS: Q-bit. GSET: SET channel. 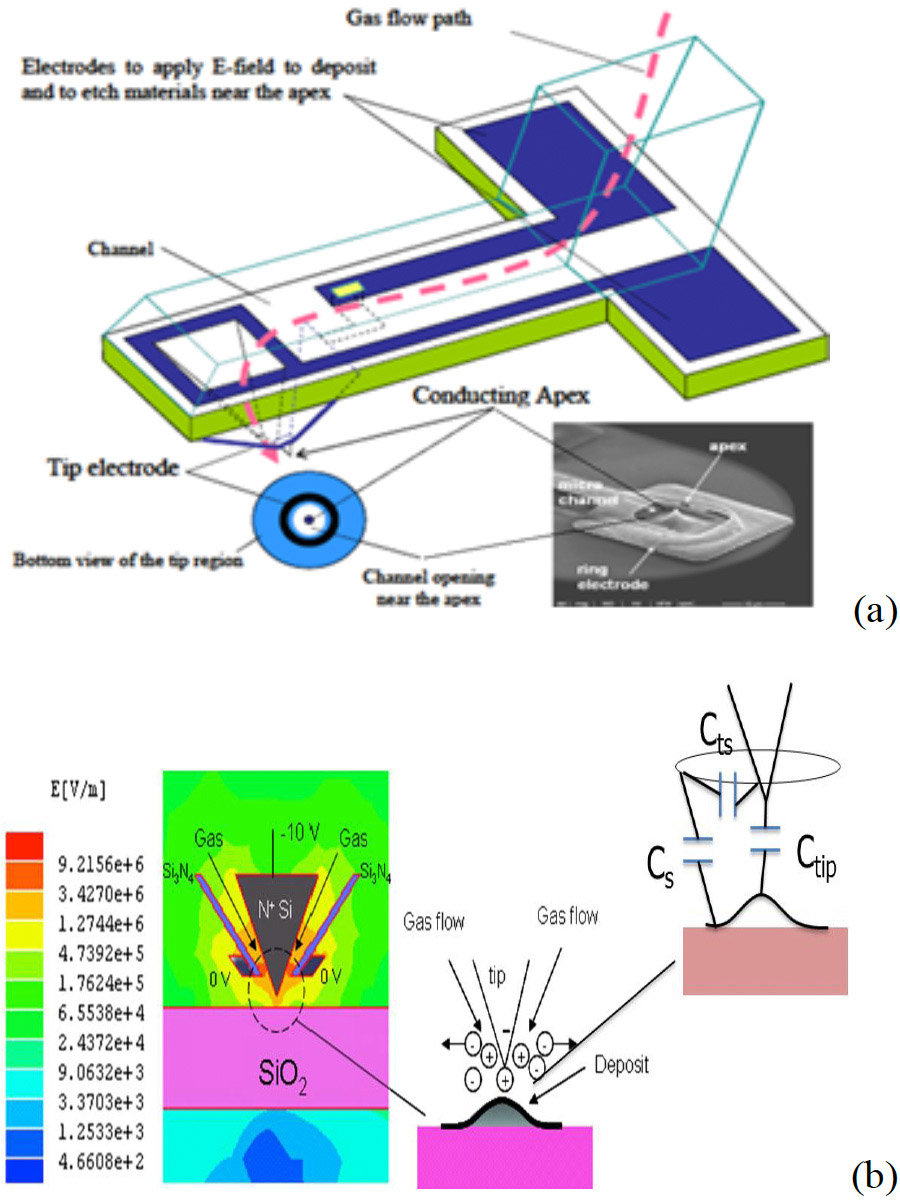 There are two main approaches to scale up this nanoplasma manufacturing technique. One is to use many AFM probes. Working like an ant colony, each probe may take a microsecond or so to deposit and etch a quantum dot, and by having many probes working in parallel, we can achieve reasonable processing times for large wafers with many billions of devices.

The second approach is less obvious, but is faster and probably more cost-effective. Rather than using an AFM probe to produce nanoplasma at arbitrary locations, we instead create frequency-selective hot spots at strategic locations in a metallic or conducting circuit by exposing the circuit to electromagnetic radiation with specific frequency and polarization8 (see Figure 4). The hot spots cause nearby precursor gases to decompose and deposit materials. Changing the radiation's polarization and frequency, we can deposit different materials at various locations on the same circuit. 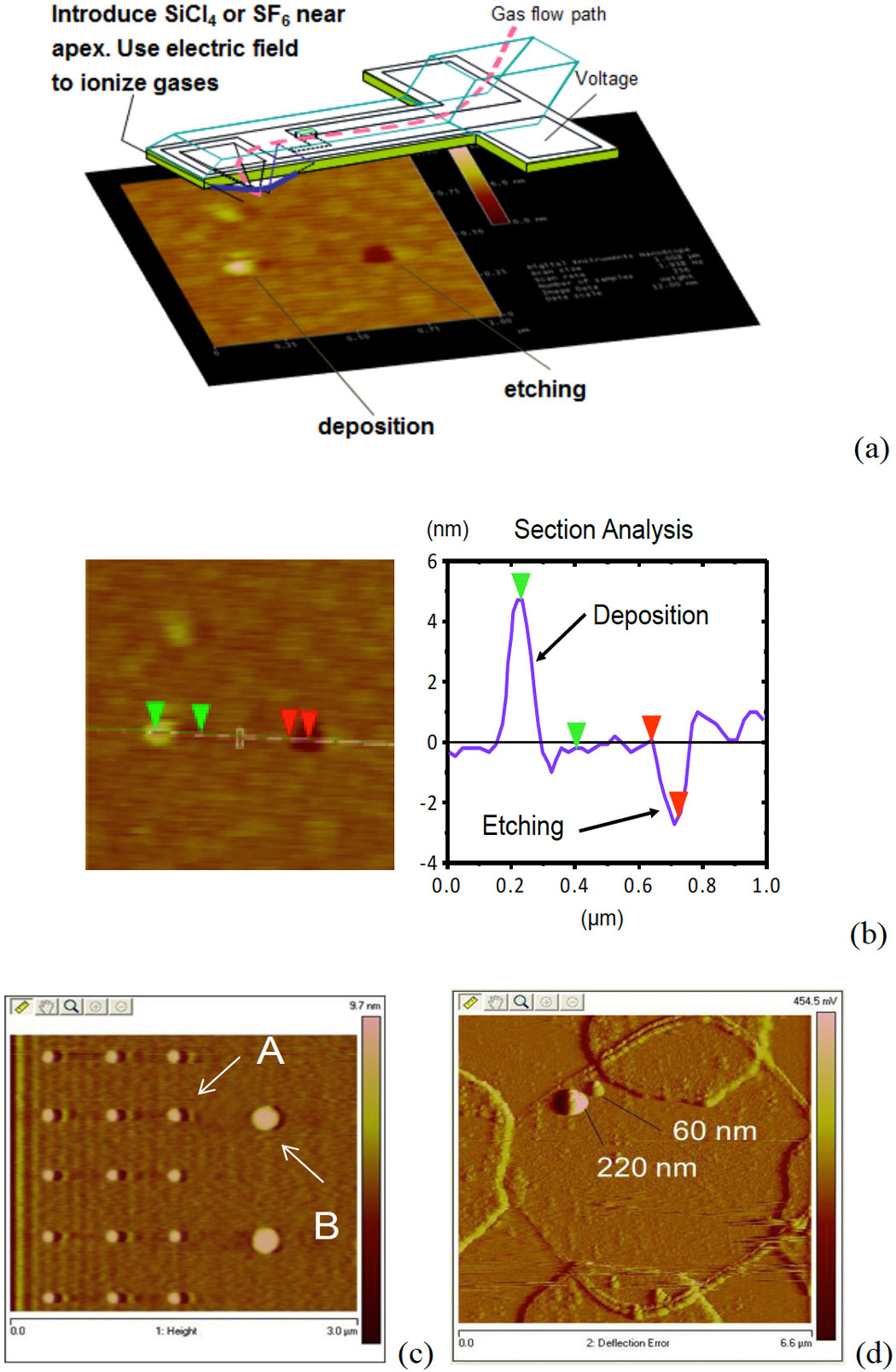 Figure 3. (a) Schematic of the functionalized AFM probe over a silicon sample. The AFM scan is superimposed to show a deposited quantum dot and an etched region. (b) The same AFM image with line scans to show dimensions of the deposited dot and etched pit. (c) Dots with widely varying ranges of dimensions can be deposited using the AFM CVD technique. The A dots are about 60nm in diameter and the B dots 200nm. (d) Dots deposited over a 6nm-thin titanium layer that was subsequently oxidized by leaving in air. SiCl4: Silicon tetrachloride. SF6: Sulfur hexafluoride.

The nanoplasma processing technique is easy to reconfigure, and can be used to add devices at the top metallization layer on demand, making it highly flexible for various applications. Since it is an additive technique, it does not require certain potentially toxic etchants and associated materials, making it safe enough for use in table-top foundries. 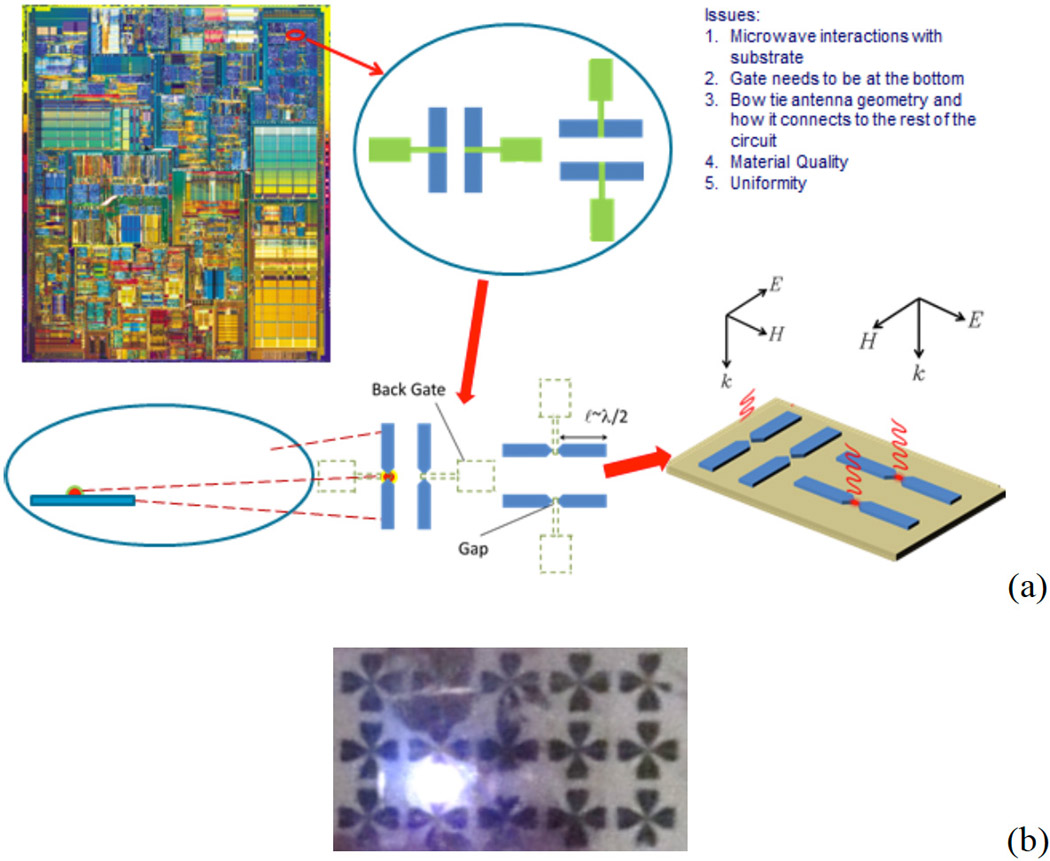 Figure 4. (a) Metallization for a metal-oxide-semiconductor field-effect transistor can be done first using 'bow-tie' antenna structures as drain-source contact regions. These structures, with their frequency selectivity given by their dimensions, generate 'hot spots' when illuminated with an electromagnetic wave with appropriate polarization and frequency. (b) A simple example of frequency-selective bow-tie structures. In this case, one device resonant at 10GHz was excited. λ: Wavelength. E: Electric field. H: Magnetic field. k: Wave vector.

The AFM-based technology is the ultimate nanoscale 3D printer. Future work will focus on making it faster (by using parallel probes and faster scanners) and more versatile by enabling it to deposit a variety of materials ranging from insulating to semiconducting to metallic. We envision that it will be the only method capable of rapidly prototyping state-of-the-art electronic, photonic, micro-electromechanical, and magnetic devices with sub-100nm features.

This work was conducted under SPAWAR Grant N66001-08-1-2042, funded by the Defense Advanced Research Projects Agency (DARPA). The views, opinions, and/or findings contained in this article are those of the author and should not be interpreted as representing the official views or policies, either expressed or implied, of DARPA or the Department of Defense.

Massood Tabib-Azar is a Utah Science Technology and Research Initiative professor of engineering, and serves as a program director at the National Science Foundation. His interests are in 3D nanofabrication, injectable bioimplants, novel communications with cells, and techniques to increase efficiencies of photo-synthesis for sun-to-fuel conversion devices.