Dynamic gratings, which can be turned on or off at any time and at any optical wavelength, are extremely useful for a number of applications, such as sensing, microwave photonics, and all-optical processing.1, 2 A Brillouin dynamic grating (BDG) exploits the interaction between a pump and a counter-propagating signal to generate a sound wave at a beat frequency via electrostriction, where a material compresses in the presence of an optical intensity gradient.3 This acoustic wave induces a so-called traveling index grating due to the elasto-optic effect. In a birefringent, or partially polarizing medium, the BDG written using light in the x-polarization is phase-matched to a probe beam in y-polarization, at a particular frequency, which allows the grating to be probed at a different wavelength. Recently, BDGs have been demonstrated in tens-of-meters-long polarization-maintaining fibers (PMFs),4 in single-mode fibers (SMFs),5 and in few-mode fibers (FMFs).6

The latest advances in nanofabrication technology have enabled the development of chip-scale nanophotonic devices. Exploiting the interaction between light and sound in these devices using stimulated Brillouin scattering (SBS) is critical for photonic integration of dynamic gratings. On-chip SBS interaction requires the generation of large Brillouin gain G=gBPpL/Aeff in short length (roughly a centimeter), where gB is the Brillouin gain coefficient, Pp is the pump power, Aeff is the effective optical mode area, and L is the device length. However, realization of Brillouin gratings on the length scale of an optical chip is extremely challenging due to the small cross section of the SBS process in the most commonly used optical materials.

Chalcogenide glass, which has a large nonlinear index of refraction (n2) that results from its large refractive index (n), has been shown to be a competent platform for on-chip ultrafast all-optical signal processing.7–9 The large n of chalcogenide glass results in a large Brillouin scattering cross section due to its strong dependence on refractive index (gB∝n8).10 However, having large n alone is not sufficient for strong light-sound interaction. Further restrictions are imposed by the need for optical-acoustic overlap, which requires the optical and acoustic modes to be confined in the same structure (see Figure 1), and a smaller optical-mode area for lower power consumption. We have exploited the large refractive index of chalcogenide glass to design a photonic chip with strong light-sound confinement, which results in a large SBS cross section (gB), along with a large birefringence (Δn≈0.037). The small effective-mode area (Aeff) of the chalcogenide photonic chip, when combined with its large gB, enables efficient on-chip dynamic gratings. 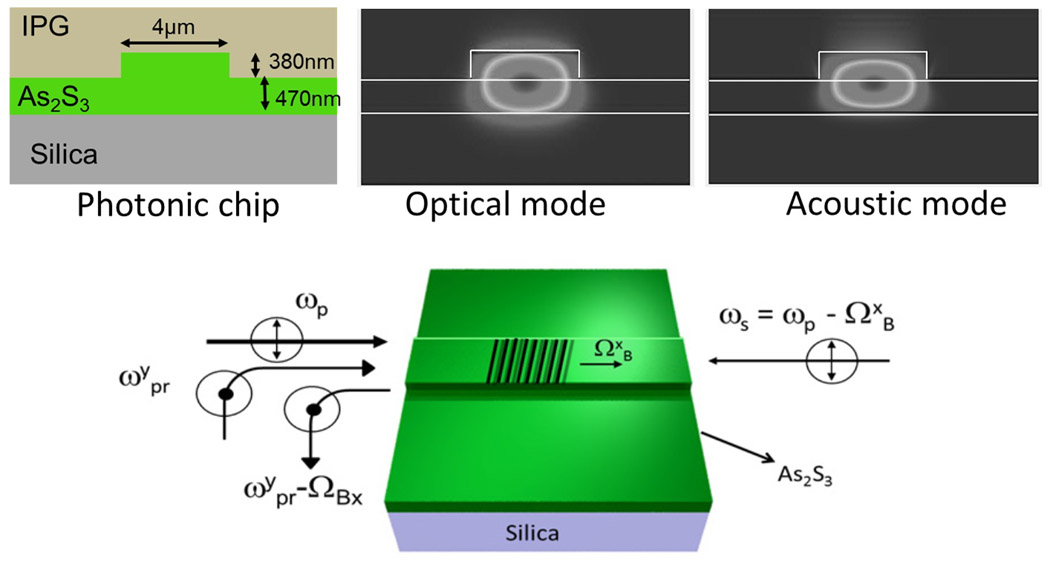 Figure 1 shows the schematic of BDG operation in our chalcogenide glass photonic chip. Counter-propagating pumps in x-polarization (refractive index nx) at frequencies ωp (pump1) and ωs (pump2) were used to write a BDG at frequency ΩxB=ωp−ωs. This BDG satisfies the phase-matching condition

where Va is the acoustic velocity, νxB=ΩxB/(2π), and λp=2πc/ωp with c being the speed of light in vacuum. The BDG written using light in the x-polarization when probed using a continuous-wave signal (ωypr) in the orthogonal polarization (y-pol), which has a refractive index ny, generates a read signal at ωyR=ωypr−ΩxB. The detuning (ΔλBDG) of the probe wavelength from the pump wavelength is given by

where Δn=nx−ny is the birefringence and ΔνB is the difference in the Brillouin shifts for the two polarizations, which is nearly 130MHz for our photonic chip. For pump1 and pump2 centered near 1550nm, this results in ΔλBDG=λpΔνB/νxB≈25.74nm using Equation 2.

Figure 2(a) shows pump2 (solid line) when pump1 is off. When pump1 is turned on, pump2 experiences gain (dashed line), demonstrating generation of a BDG. The BDG is then characterized by launching a probe in y-polarization. When one of the pumps in x-polarization is off, no read signal is observed in the backscattered signal: solid line, Figure 2(b).11 However, when both pumps are turned on, we observed a large read signal with an on-off ratio ∼28dB: dashed line, Figure 2(b).

Figure 2. (a) Pump2 spectrum when pump1 is off (solid line) and on (dashed line), demonstrating Brillouin gain and generation of the Brillouin dynamic grating (BDG). (b) Switching characteristics of the BDG when both pumps are turned on, resulting in an on-off ratio ∼28dB.

We characterized the reflectance of the BDG as a function of power (Pp1) in pump1 for fixed power (Pp2=8mW) in pump2. Figure 3(a) shows the variation of read signal with Pp1, where each spectrum is shifted by 5dB. Figure 3(b) shows the BDG reflectance vs. Pp1 demonstrating exponential growth, which is as expected because Brillouin gain increases exponentially with Pp1. A maximum reflectance of ∼0.4% was measured for our on-chip BDG—see Figure 3(b)—which is comparable to that in 20m-long SMF, 30m-long PMF, and 15km-long FMF with nearly the same average Pp1.

The read signal vs. frequency of pump2 (νpump2), as shown in Figure 4(a), maps the Brillouin-gain spectrum, as expected, and has nearly the same bandwidth (∼32MHz) as the Brillouin-gain bandwidth ∼34MHz10 in our photonic chip. Figure 4(b) shows the read signal as the probe wavelength is detuned from the probe center wavelength. The measured 3dB bandwidth for our photonic chip BDG is f3dB∼6GHz, which is nearly six times larger than the bandwidth calculated using the weak grating (Δν=c/2nL≈1GHz) approximation. We attribute this spectral broadening to the non-uniformity of the BDG. Propagation loss may also induce temperature fluctuations, further contributing to broadening. Non-uniform grating and temperature fluctuation combined with coupling fluctuation (∼1dB) may also be responsible for a slight asymmetry in the measured spectra.

Figure 4. Frequency response of the on-chip BDG: (a) read power variation with detuning of pump2 frequency from the Stokes frequency demonstrating that the BDG maps the Brillouin gain spectrum, and (b) read power as the probe frequency is detuned from the center probe frequency. ΔνFWHM: Full width at half-maximum spectral width.

In summary, we have demonstrated the first photonic-chip, dynamic Brillouin grating, which opens up opportunities for photonic integration in all-optical data and microwave signal processing. In future, we plan to exploit on-chip dynamic Brillouin gratings for applications in on-chip microwave photonic filters, all-optical signal processing, and data storage. In general, on-chip SBS will be exploited for chip-scale Brillouin lasers and for generating frequency combs. Recent proposals and demonstration of SBS in a silicon photonic chip12, 13 promise a plethora of opportunities for integration of SBS-based devices in a CMOS-compatible platform.

This work was funded by the Australian Research Council (ARC) through its Discovery grant (DP1096838), Laureate fellowship (FL120100029), and Centre for Ultrahigh Bandwidth Devices for Optical Systems (CUDOS) Centre of Excellence (grant CE110001018). We acknowledge the contribution of Enbang Li, and our collaborators Christopher Poulton at the University of Technology, Sydney, and Duk-Yong Choi, Steve Madden, and Barry Luther-Davies at the Australian National University.

Benjamin J. Eggleton is an Australian Research Council Laureate fellow, director of CUDOS, and professor at the School of Physics, University of Sydney. He is a fellow of the Optical Society of America and the IEEE. His research interests include nonlinear optics, nanophotonics, optical signal processing, and photonic integration.

Ravi Pant is an ARC postdoctoral fellow at CUDOS, University of Sydney. He received his PhD from the College of Optical Sciences at the University of Arizona in the area of SBS-based slow and fast light. His research interests include developing novel devices using nonlinear photonics and via tailoring photon-phonon interaction in nanostructures.