Electronic circuits alone cannot fully meet the future requirements for speed, size, and weight of many sensor systems such as digital radar technology. Using photons rather than electrons offers the chance to increase the speed of signal processing while also reducing the size of components and increasing bandwidth. As a result, interest in integrated photonic circuits (IPCs) and the hybridization of electronics with photonics is growing.

A common paradigm regarding IPC fabrication and operation has been maturing within the photonics community during past decades. First, IPCs require a common substrate, for which silicon has recognized advantages. Commercially available silicon wafers are large, inexpensive, and offer extreme flatness for optical components, excellent electronic properties for integration with electronic devices, compatibility with many epitaxial materials, and potential for simple integration with optical fiber. Second, IPC operation at a 1.55μm wavelength has advantages for compatibility with optical communications systems and subcomponents already developed for the optical communications industry. Finally, silicon is the most mature material for fabricating optical waveguides, modulators, and other components, although many alternative materials are necessary for additional functionality.1 Yet IPCs have only achieved inconsequential success in transitioning from concept to commercial and military applications, and the explanation is poorly performing compnents such as optical detectors, lasers, and modulators.

Germanium offers the potential to enhance the performance of IPC components, and recent world-first 1.55μm device demonstrations have focused attention on it. Duan and colleagues at the Agency for Science, Technology and Research (A*STAR, Singapore) demonstrated a photodetector containing a germanium detector region and a silicon avalanche region with enormous responsivity of 12A/W and a high-frequency response (8GHz),2 and Chen and coworkers at Alcatel-Lucent Bell Laboratories have demonstrated an amazingly higher-speed (40 Gbit/second) demultiplexer and photodetector array.3 In addition, Camacho-Aguilera and coworkers at the Massachusetts Institute of Technology have demonstrated an electrically-pumped laser diode.4

Historically, germanium was the semiconductor that initiated the electronics revolution, but it was quickly replaced by silicon at the beginning of the 1960s. Silicon has the advantages of a native oxide for inexpensive masking and dielectric layers and a more desirable operating temperature range (240°C versus 85°C maximum operating temperature). Despite this, germanium has specific advantages that are relevant to enabling integrated photonic circuits. Its direct energy bandgap is just slightly larger than its indirect energy bandgap. This permits band-to-band recombination and generation at an energy that corresponds to light near the optical communications wavelength of 1.55μm and enables a host of photodetector and laser designs with very short interaction lengths. These short interaction lengths could enable a host of IPC subcomponents, including photodetectors and laser diodes. The alignment of silicon and germanium conduction and valence energy bands also enables simple device designs for filling the lower energy states of germanium's conduction band and for depopulating the upper energy states of its valence band to access that direct bandgap to fabricate laser diodes. Band-filling effects in germanium subregions of a silicon modulator could also be used to enhance performance. In addition, for all of these devices, germanium can be incorporated into a planar silicon processing schedule for inexpensive IPC manufacturing.

Consider one fundamental component: photodetectors, which convert photons into electronic signals. Existing 1.55μm photodetectors are either incompatible or perform poorly with silicon substrates. Silicon photodiodes' extrinsic detection of 1.55μm light is quite inefficient and slow (<1GHz). Photodiodes based on gallium indium arsenide are fast, well developed, and highly responsive to 1.55μm light, but they have limited potential for true integration with silicon and optical waveguides. In contrast, germanium photodiodes promise high responsivity with the added benefit of true integration. Figure 1(a) illustrates our test photodiode, and Figure 1(b) shows a phototransistor integrated into an optical silicon waveguide for driving additional on-substrate components.5 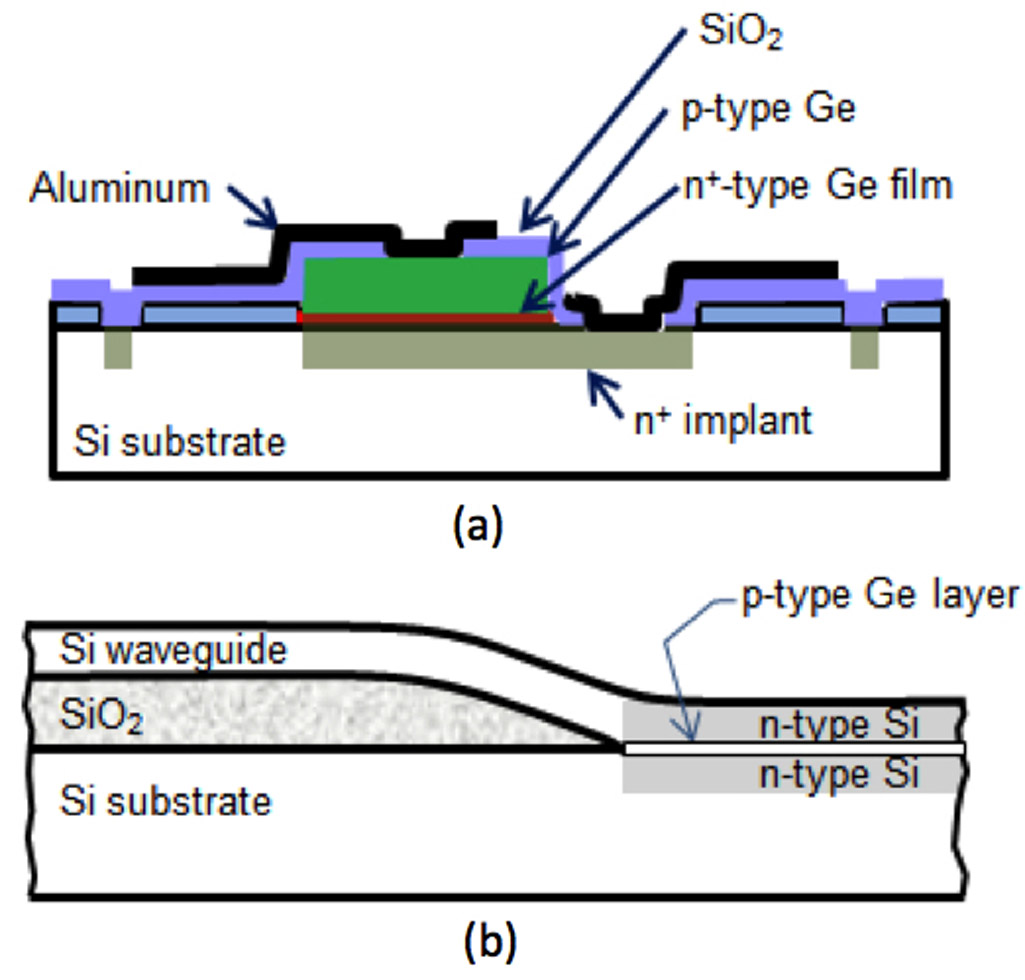 Figure 1. (a) Cross-section of a test photodiode for which the detector junction is formed by a phosphorous-implanted n+ germanium (Ge) region and a p-type Ge region, and where the junction is illuminated through the silicon (Si) substrate. (b) Cross-section of a phototransistor that is integrated with an optical waveguide for which the thin p-type Ge region is the transistor's base. SiO2: Silica is an insulator. p-type: Holes in valence band are the majority charge carriers. n-type: Electrons in the conduction band are the majority charge carriers. n+ implant: High concentration of electron majority carriers is created by implantation of phosphorous.

High-quality germanium growth on silicon is challenging due to a large lattice mismatch (∼4%), but during the past decade, a number of researchers have fabricated useful germanium films by electron-beam evaporation, chemical-vapor deposition, pulsed-laser deposition, and molecular beam epitaxy. Native defects associated with the lattice mismatch act as acceptors, and the doping concentration is dependent upon deposition conditions. The native doping can be directly used in device design, or it can be eliminated by compensation or partially by relaxation. One goal of this effort is to understand the specific effect that various defects have on material properties and to selectively control those defects. For example, certain defects will degrade the minority carrier diffusion length that, in turn, determines the performance of photodiodes and phototransistors.

We have exclusively used e-beam evaporation and pulsed laser deposition because these two techniques provide high-quality amorphous germanium and well-oriented polycrystalline germaniuim, respectively. Figure 2 shows the relatively flat 2θ diffraction pattern of an e-beam-grown amorphous film that contrasts with the very sharp lines of the pulsed-laser-deposited (PLD) films that indicate well-oriented polycrystalline material. We found we could control the degree of crystallinity of our films primarily by substrate temperature and deposition techniques. Lower temperature growth generally produced amorphous films. In addition, PLD produced films with much higher levels of crystallinity than possible with e-beam deposition, probably due to the fact that germanium atoms arriving on the surface are more energetic. Other researchers have also used surfactants during growth,6 but we have not yet explored this possibility. 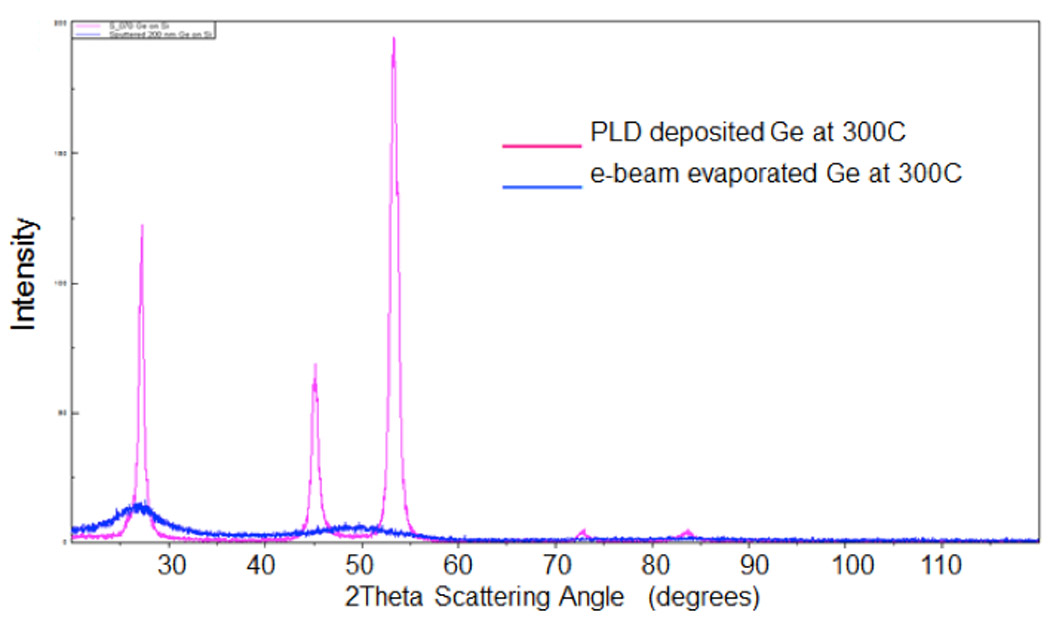 IPC-compatible detector structures require patterned thin films. Although dry-etch techniques and shadow masking during deposition are important, a low-cost wet-etch process would be more tolerant regarding etch times. Despite this, we have not seen any reports in the technical literature on patterned etching by wet processes. However, germanium etchants, such as hydrogen peroxide and chromium etchant CR-7 that react minimally or not at all with the underlying Si, are described in the literature.7 We have observed lateral etching beneath the photoresist, often on the order of 7-to-1 for lateral versus vertical etching, and at times, it is clearly due to photoresist liftoff. However, lateral etching can be significantly reduced. Presently, we are completing a comparison of various etchants for both amorphous and well-oriented polycrystalline films. Elevated temperatures interfere with the interfacial bonding between the surface and the hydroxyl groups of the phenolic polymer base of positive photoresists, so room-temperature or cooled etch solutions are preferred. Additives in the etchant solutions may also better protect the bonding.

In summary, germanium has specific advantages that are relevant to enabling IPCs. Its direct energy bandgap permits band-to-band recombination/generation at an energy that corresponds to light near the optical communications wavelength of 1.55μm, which could enable a host of IPC subcomponents, including photodetectors and laser diodes. In addition, such germanium devices can be simply and inexpensively incorporated into a silicon manufacturing process. Our future efforts will focus on incorporating germanium into IPC fabrication, integrating detectors, laser sources, and possibly other photonic components with fiber, channel, and slab waveguides along with electronic components including antenna elements.

Frank Kenneth Hopkins is a principal electronics engineer. He is a SPIE Fellow, a senior member of the Institute of Electrical and Electronic Engineers (IEEE), and a member of the Optical Society of America (OSA) and the Association of Old Crows (AOC).