New photovoltaic cells made with graphene—single layers of carbon— coated with a layer of nanowires are light, flexible, offer high power conversion efficiencies, and can be deployed on a range of surfaces.
09 August 2013
Silvija Gradečak

Most of the world's energy resources are generated when the sun's rays hit Earth. Each year, 8000 times as much solar energy is produced than is consumed worldwide. Although solar radiation accounts for most of the world's available renewable energy, only a small portion of it is currently harnessed. This is mostly due to the high cost of producing and installing the commercial, silicon-based photovoltaic (PV) technology that is necessary to convert solar energy into electricity. Researchers are exploring low-cost alternatives such as organic, nanostructured, or hybrid solar cells based on graphene, an all-carbon material. This approach opens up opportunities for the development of flexible PV devices with high power conversion efficiencies, for use on curved or transparent surfaces, for example, windows.

To obtain high power conversion efficiencies, all-organic PV devices must be composed of an interpenetrating network of electron-donor and electron-acceptor components, known as bulk heterojunction solar cells (BHJs). These are created using either polymer blends or polymer hybrids, mixtures of conjugated polymers and C60 (fullerene) derivatives. However, both of these designs have limitations. All-organic PV devices only produce modest power conversion efficiencies due to inefficient charge transport through the discontinuous pathways in the BHJ films. And those based on C60 derivatives are currently not cost competitive enough.

Along with the development of hybrid BHJ solar cells, we explored the use of graphene as a more effective, less-expensive conducting electrode material to replace indium tin oxide (ITO), the current choice for transparent electrodes. The indium used in ITO is expensive, while graphene is made from ubiquitous carbon, which is cheaper. It also provides other advantages, including flexibility, low weight, mechanical strength, and chemical robustness.

However, building semiconducting nanostructures directly onto pristine graphene for practical applications, without impairing its electrical and structural properties, has been challenging due to graphene's stable and inert sp2-hybrid structure. We used a series of polymer coatings to modify its properties.5 This allowed us to bond a layer of ZnO nanowires to it, and then an overlay material that absorbs light, either PbS quantum dots or P3HT. Despite these modifications, graphene's innate properties remained intact. 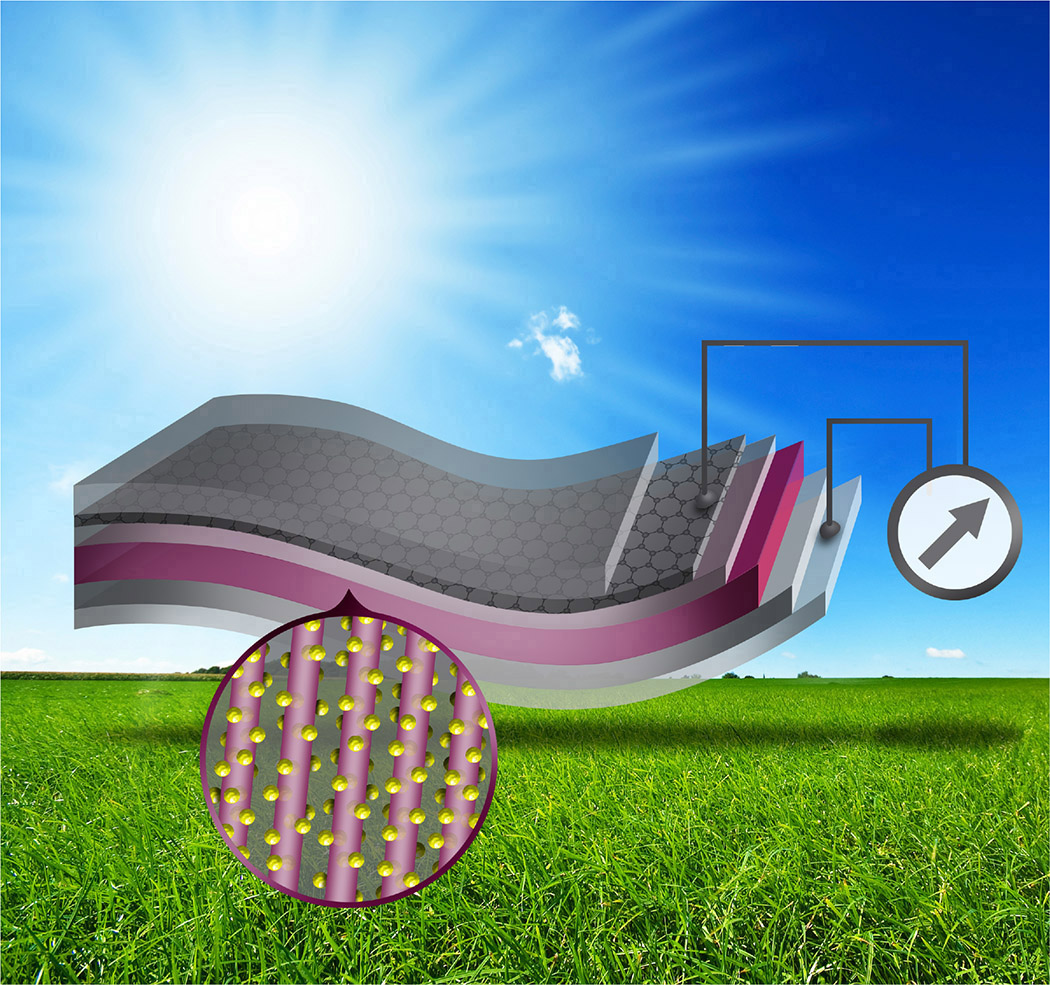 Figure 1. Illustration showing the layered structure of the new solar device, starting with a flexible layer of graphene. A layer of polymer is bonded to that, and then a layer of zinc oxide nanowires (shown in magenta), and finally a layer of a material that can extract energy from sunlight, such as quantum dots or a polymer-based material.

Our most recent work demonstrates graphene-cathode-based hybrid solar cells (see Figure 1) using two different photoactive materials, PbS quantum dots and P3HT, with AM1.5G (a standard illumination test) power conversion efficiencies of 4.2 and 0.5%, respectively. Our method for fabricating semiconducting nanostructures onto graphene, through a process of interface engineering, preserves graphene's structural and electrical properties. This makes it a viable replacement for ITO in various PV device configurations, which opens up a wide range of opportunities for the development of flexible PV devices. Moreover, this structure can also be applied to a variety of nanoelectronic devices, such as LEDs.

In summary, we have described the design of organic/inorganic hybrid solar cells that offer a range of attractive characteristics, including enhanced conversion efficiencies. We are currently investigating other graphene-electrode-based and solution-processable flexible PV systems with the goal of achieving device performance comparable or superior to that of conventional counterparts.