High-resolution lithography is essential for the miniaturization of electronic processing and storage elements, development of metamaterials, and even biological applications. Optical approaches to nanolithography have long been of interest because they offer the ability to write large-area patterns in parallel. In addition, optical radiation is non-ionizing and thus inflicts less damage than short-wavelength, higher-energy techniques, such as electron-beam or deep-UV lithography. However, for optical lithography to be useful for nanoscale applications, it is necessary to overcome the diffraction limit to resolution. To this end, many super-resolution approaches have been proposed over the last few years, including quantum lithography,1 coherent multi-photon lithography,2, 3 donut beam techniques,4–6 and Rabi flops.7 Here we propose a much simpler approach based on magnetic resonance imaging (MRI).

In high-resolution optical lithography the desired pattern is transferred onto a substrate using a variety of techniques, the simplest of which is imaging using lenses. The pattern is then made permanent by the exposure of a photoresist. The photoresist can be used to control subsequent etching and deposition, or can even be part of the final device. In our proposed magnetic resonance lithography approach, the pattern is first transferred to a thin layer of material containing electron or nuclear spins. This is done by applying magnetic gradient fields and microwave pulses that look similar to the signals acquired during a conventional MRI scan (see Figure 1). Since the desired pattern is written in spin sub-levels that do not have enough energy to expose photoresist, an optical readout is required. This is accomplished using materials exhibiting optically detected magnetic resonance (ODMR) of which nitrogen-vacancy (NV) color centers in diamond are a prime room-temperature example.8–10 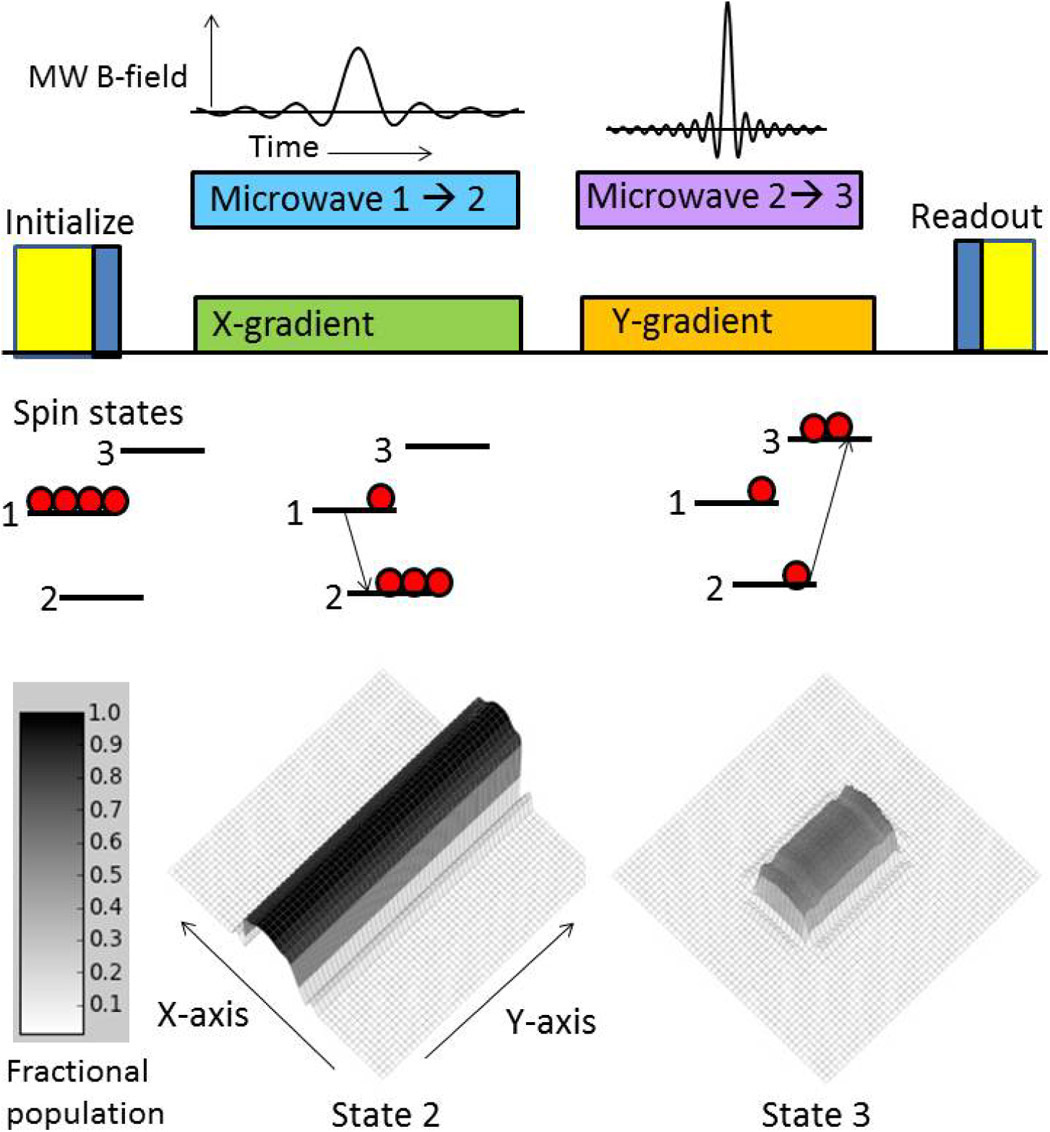 Figure 1. Level diagrams, pulse sequences, and simulation results for writing a 2D rectangle pattern in an ensemble of nitrogen vacancies in diamond. The system is first initialized into a spin state 1 by optical and microwave (MW) pulses. A line is then written in the spin state 2 population by applying the magnetic gradient and microwave pulses shown. Features within the line are written in the state 3 population with a second set of gradient and microwave pulses. Finally, microwave and optical readout pulses are applied to expose the photoresist. Additional pulses (not shown) are used to prevent crosstalk between adjacent lines. B-field: Magnetic field.

To write arbitrary 2D patterns with magnetic resonance lithography, multiple lines are written in sequence, in analogy with the multiple lines comprising an MRI image. Figure 1 shows simulation results based on using the three magnetic energy (spin) sub-levels of the NV diamond ground state. The spins are first initialized by some combination of optical pumping and microwave pulses. A line is selected by applying a magnetic gradient field in the x-direction while a microwave pulse is applied near resonance with the 1→2 transition. As seen in Figure 1, the population of spin level 2 acquires the intended line pattern. Next, the x-gradient is replaced by a y-magnetic gradient and a complex pulse near resonance with the 2→3 transition is applied, which contains the Fourier transform of the portion of the arbitrary pattern to be written along the selected line. As seen, the population of level 3 acquires a single line of the intended 2D pattern, without significant background population at non-intended locations.

In summary, we have used simulations to show that it is possible to write a pattern in the spin levels. More research is needed to demonstrate that we can actually write the pattern and transfer it to the photoresist. While a number of problems still remain to be solved before the proposed MRI-based super-resolution lithography can become a viable alternative to existing techniques, our work represents a key step. By identifying a simple approach to solving the physics of sub-wavelength lithography, we have freed up future resources to concentrate on the more challenging problem of resist exposure. The next steps consist of identifying a photoresist that can work well with the ODMR material, increasing the aerial density of spins while maintaining long coherence times, and developing ODMR materials with better contrast11 and/or upconversion fluorescence.12

This research is supported by funds from the King Abdulaziz City for Science and Technology (KACST) and the Qatar National Research Fund. We acknowledge helpful discussions with Charles Santori of HP Laboratories.

Philip Hemmer is a professor in the Department of Electrical and Computer Engineering. He received his PhD in physics from the Massachusetts Institute of Technology. His current research interests include quantum optics, magnetic sensing with fluorescence diamond color centers, sub-wavelength imaging and lithography, solid-state quantum computing, plasmon nano-optics, slow light, and ultrasound imaging.

Fahad Alghannam received his BS in physics from King Saud University, Saudi Arabia, and his MS from Texas A&M University, where he is currently a PhD candidate. In addition, he is a researcher in the National Center of Mathematics and Physics at KACST.

Suhail Zubairy holds the Munnerlyn-Heep Chair in Quantum Optics at the Department of Physics and Astronomy. He has published over 300 papers in quantum optics and laser physics and is the co-author of Quantum Optics. He has received many awards, such as the International Khwarizmi Award and the Humboldt Research Prize.