To build nanophotonic circuits, however, many functional elements must be developed. The plasmonic waveguide is an important element for light transmission, with the electromagnetic field tightly confined in nanoscale lateral dimensions. Chemically synthesized crystalline-silver nanowires are good waveguides for proof-of-principle demonstrations of SP-based nanophotonic devices and circuits. In recent years, we have explored the properties of SP propagation on metal nanowires3 and demonstrated that these structures can be used as routers, demultiplexers, or quarter-wave plates.4, 5 In addition, to construct nanophotonic information processing architectures, we also needed to develop Boolean logic gates. 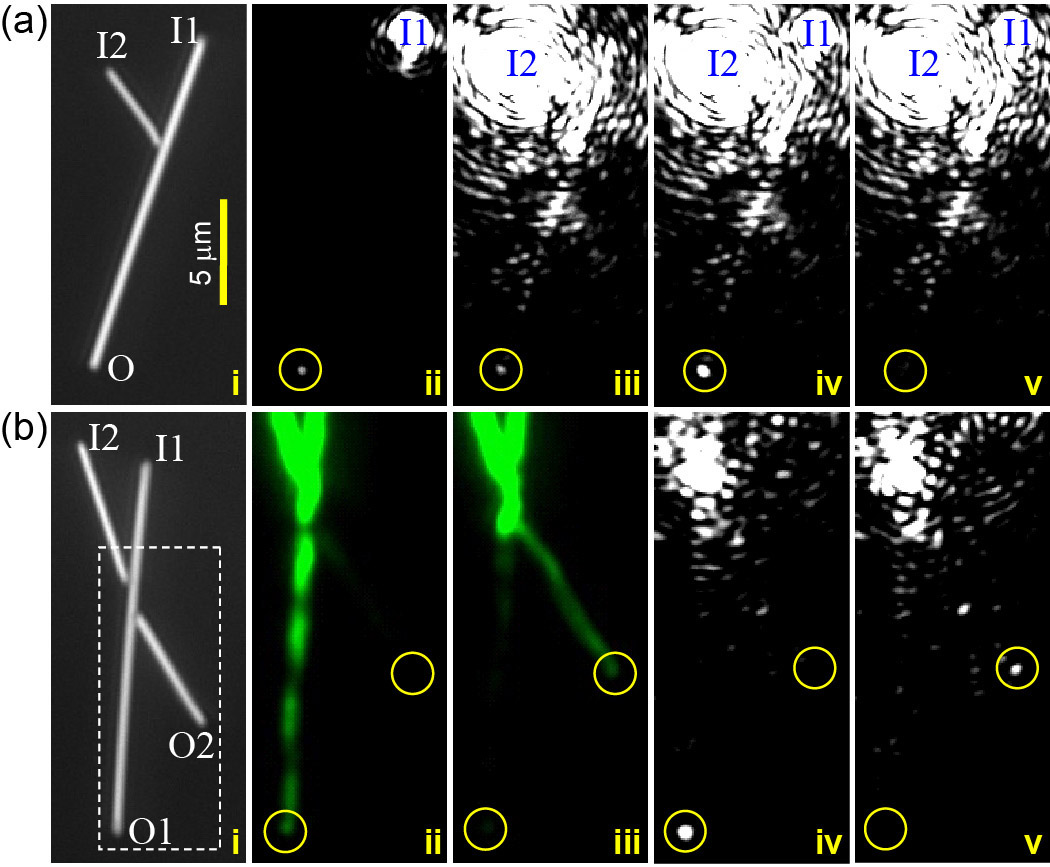 We started by fabricating branched silver nanowire structures with two input terminals for logic operations: see Figure 1(a)i.6 We excited SPs by focusing the light on the nanowire end (I1 or I2). They then propagated along the nanowire and coupled out as photons at the output end (O): see Figures 1(a)ii and iii. The SPs generated by two coherent light beams interfere and result in either strong or weak light output at terminal O, depending on the phase difference of the two input light beams: see Figures 1(a)iv and v. By setting a threshold intensity for the 1 and 0 states of the output signals, the light transmitted through the simple nanowire network executes specific Boolean logic operations. The structure shown in Figure 1a can be used to perform fundamental logic operations AND, OR, and NOT, by choosing the proper threshold intensity. 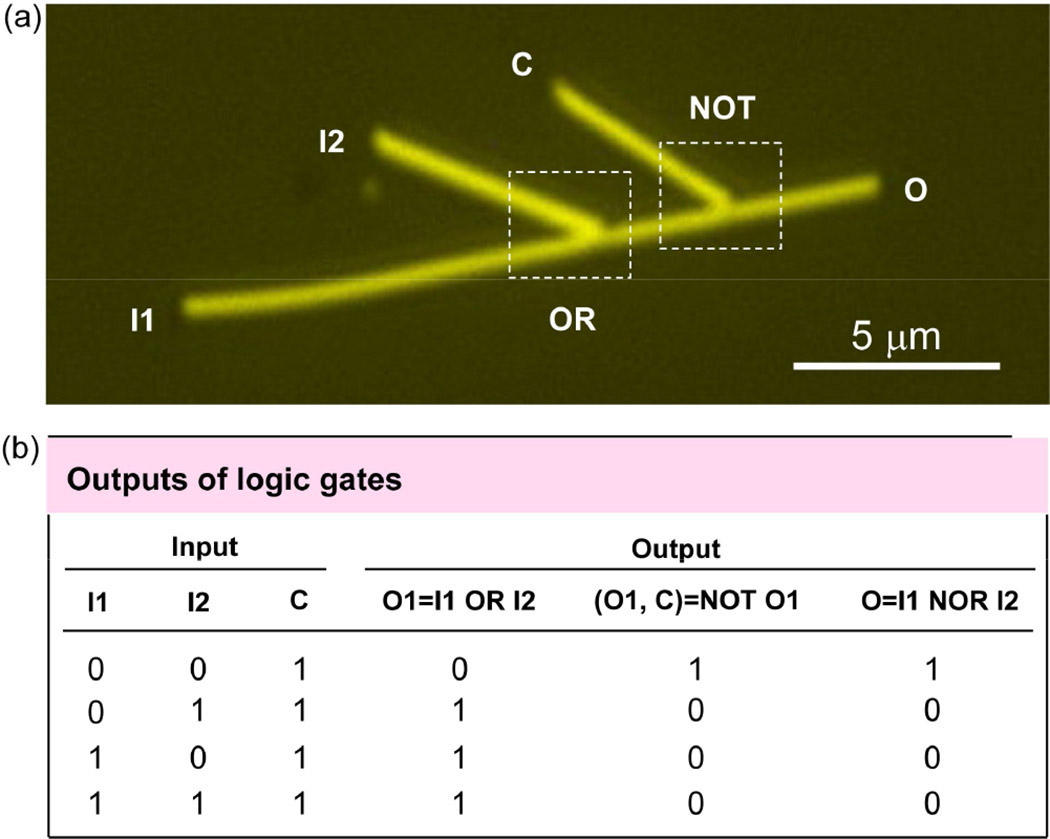 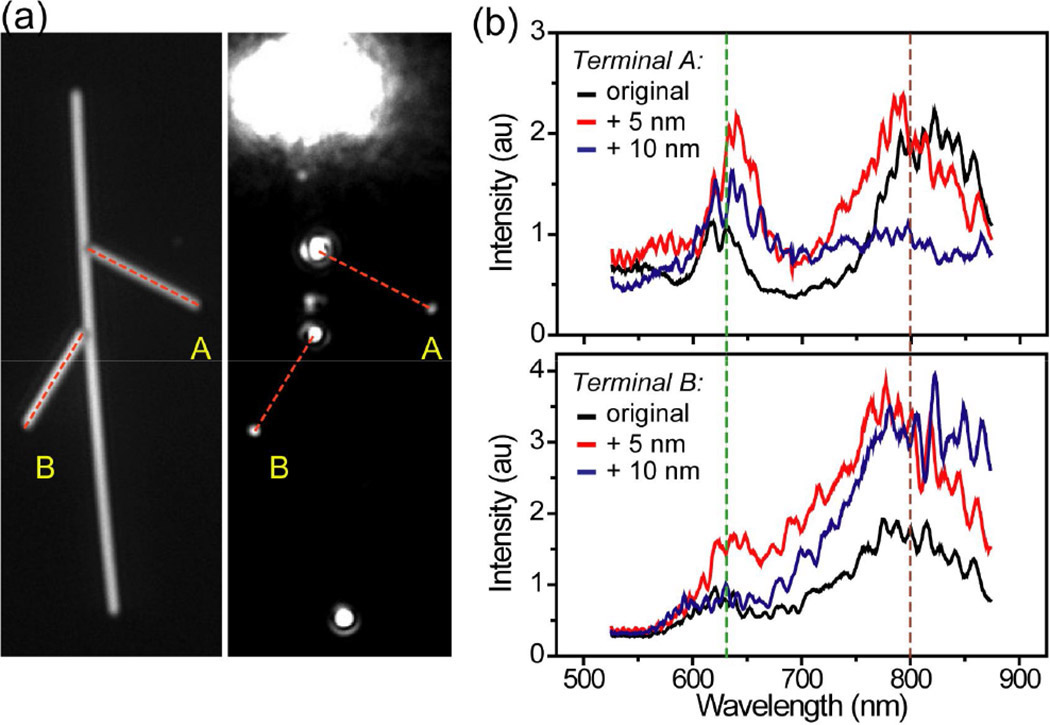 Figure 3. (a) A structure composed of three nanowires was illuminated by supercontinuum light. (b) The upper panel shows the emission spectra at terminal A for the original structure (black), and for 5nm (red) and 10nm (blue) Al2O3layer deposited, respectively. The lower panel is for terminal B. AU: Arbitrary units.

To perform more complex operations, the basic logic gates need to be cascaded. We constructed one universal logic gate, NOR, and demonstrated that it can be cascaded by OR and NOT gates. The nanowire structure is composed of three silver nanowires (see Figure 2a).7 Those with terminals I1 and I2 compose the OR gate, and the nanowires with terminal C and I1 make the NOT gate. The output intensities at terminal O for different inputs showed that we realized the NOR gate through cascaded OR and NOT gates (see Figure 2b). For the logic operations, the input light polarization needs to be controlled to guarantee efficient interference of SPs.8 (Note, we have more recently analyzed the feasibility of constructing logic gates in metal slot waveguide networks.)9

The propagating SPs can be modulated by changing the nanowires' dielectric cladding. We coated Al2O3 layers of different thickness onto the silver nanowire and found the period of the near field pattern increased with thicker Al2O3. The near-field distribution change will influence light routing in nanowire networks. To demonstrate this, we prepared a structure composed of three nanowires with 30nm-thick Al2O3 cladding (see Figure 3a, left panel).10 We used white light from a supercontinuum light source to excite the propagating SPs in the nanowire network: see Figure 3(a), right panel. The spectra of light emitted at terminals A and B for different Al2O3 thicknesses are quite different, showing the response of different wavelengths to the changes in the cladding. These results indicate that the light guiding in the nanowire networks can be designed by controlling the dielectric cladding, which will benefit the design of logic gates.

In summary, by controlling the light propagating in simple networks of metal nanowires, we have realized a complete family of Boolean logic gates. Moreover, the universal NOR gate was demonstrated by cascading OR and NOT gates. The propagation properties of SPs in the nanowire networks are sensitively dependent on the dielectric claddings. In the future work, we will try to control the SPs through actively controlling the claddings' dielectric properties and investigate compensating SP propagation losses by using gain media.

Hongxing Xu, professor in the Institute of Physics, focuses his research on nanophotonics and plasmonics.

Hong Wei, associate professor in the Institute of Physics, focuses her research on plasmonic waveguides and circuits and surface-enhanced Raman spectroscopy.