Research and industrial fields as varied as biology, agriculture, forensic science, and pharmaceuticals require fast, accurate, and non-destructive identification of substances. There are many technologies for detecting analytes,1 some of which make use of surface-plasmon-polariton (SPP) waves.2 SPP waves propagate guided by the planar interface of a metal and a dielectric material. However, it is only possible to detect a single analyte at a time. Furthermore, we often want to enhance the reliability of the measured concentration of the analyte.

Often, SPP-wave-based optical sensors are based on the Turbadar-Kretschmann-Raether (TKR) prism-coupling configuration,3 in which an SPP wave is guided by the planar interface of a thin metal film and an isotropic and homogeneous dielectric material, as shown in Figure 1. On the opposite side of the metal film, there is a prism made of an optically denser material compared to the dielectric material partnering the metal film. Light of a fixed frequency is launched toward one slanted face of the prism. Light refracted into the prism is then incident on the interface of the prism and the metal film at a certain angle θ with respect to the thickness direction of the film. Oriented toward the other slanted face of the prism, a photodetector measures the intensity of the light reflected from the metal film into the prism and then refracted into air. As the angle of incidence θ increases toward 90°, a sharp drop in reflectance measured by the photodetector indicates an SPP wave has been excited, provided there is no transmittance across the partnering dielectric material. Because the partnering dielectric material is both isotropic and homogeneous, the SPP wave is excited only by p-polarized light.2 With reference to Figure 1, the magnetic field of p-polarized light is oriented perpendicular to this page, and the electric field of s-polarized light is perpendicular to the page. 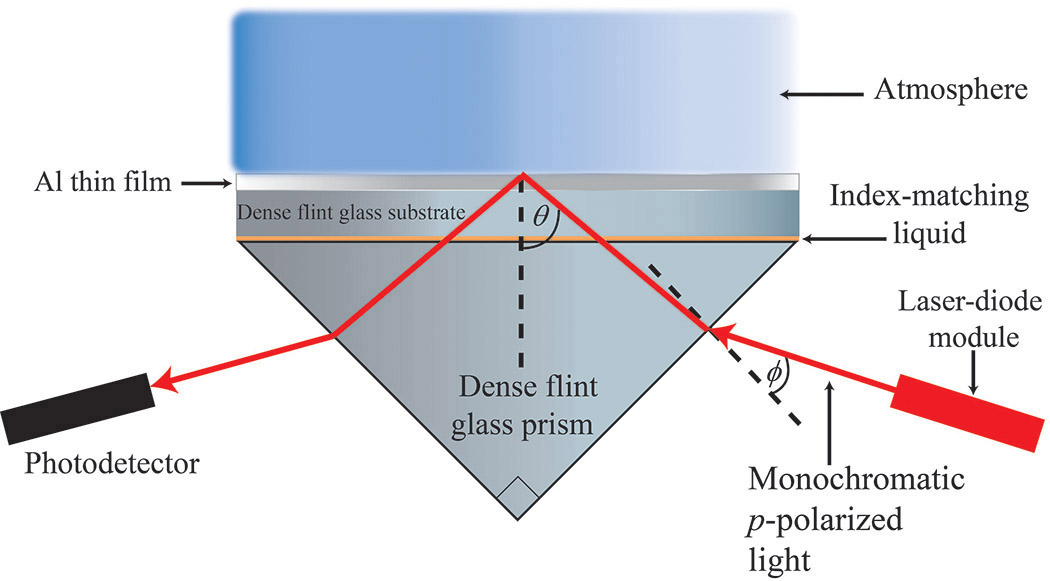 Figure 1. Setup of the Turbadar-Kretschmann-Raether (TKR) configuration, in which a thin metal film deposited on a substrate is affixed to a prism of the same optical density as the substrate. An index-matching liquid between the prism and substrate ensures a minimal refractive-index mismatch between the prism and the substrate. A fraction of the monochromatic p-polarized light incident on one slanted face at angle φ is incident on the prism/metal (aluminum, Al) interface at angle θ. The partnering dielectric material is air. When air on the exposed side of the metal film is replaced by a fluid, a change occurs in the value of φ, and therefore of θ, at which a reflectance dip indicative of the launch of an SPP wave occurs. This change can be calibrated for sensing.

Perturbations in the partnering dielectric material will cause a shift in the angular location of the dip in reflectance.4 This shift is exploited in standard SPP-wave-based optical sensors to detect hundreds of analytes.2 This angular-interrogation method provides reliable sensing, but only one SPP-wave mode is launched, and so only one analyte can be detected by a sensor.

About five years ago, it was predicted that, if the isotropic and homogeneous dielectric material were to be substituted by a dielectric material that is periodically non-homogeneous in the direction normal to its interface with the partnering metal, more than one SPP-wave mode could be guided at the same frequency.5,6 Furthermore, the different SPP-wave modes would have different spatial-field profiles, attenuation rates, and phase speeds. Several reports of experimental verification of this phenomenon, called surface multiplasmonics,7 have since been published.8–10 Both s- and p-polarized light can be used to excite an SPP-wave mode, with different excitation efficiencies, when the partnering dielectric material is not constrained to be homogeneous.3

We have explored whether surface multiplasmonics can be exploited for SPP-wave-based sensing. We chose the periodically non-homogeneous material to be a chiral sculptured thin film (CSTF) for implementation in the TKR configuration, as shown schematically in Figure 2. 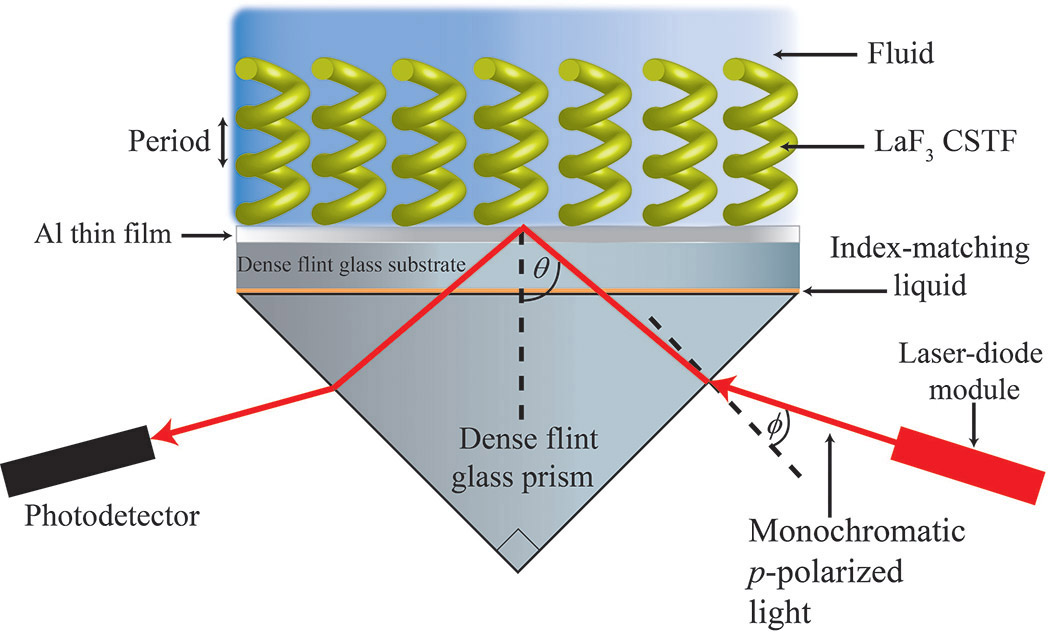 Figure 2. Same as Figure 1, but now a chiral sculptured thin film (CSTF) serves as the partnering dielectric material. Multiple SPP-wave modes can now be excited at different values of θ. When the CSTF is infiltrated by a fluid, each value of θindicating the launch of a different SPP-wave mode shifts, depending on the refractive index of the fluid. Even though a p-polarized plane wave is indicated, theory suggests that s-polarized plane waves should also be useful. LaF3: Lanthanum fluoride.

A CSTF is fabricated by first placing a solid material in a metal boat within a low-pressure chamber. An electric current is passed through the boat to vaporize the solid material, and a collimated flux of the evaporated material is directed toward a substrate rotating at a constant rate about an axis that passes normally through it.11 As a result, an assembly of parallel nanohelixes grows on top of the substrate, forming the CSTF. As a CSTF is naturally porous (with porosity depending on deposition parameters), a solution containing an analyte can infiltrate it to perturb its dielectric properties. In the TKR configuration, infiltration of the CSTF by an analyte leads to a higher angle of incidence being needed to launch an SPP-wave mode, resulting in optical sensing of the analyte. Furthermore, more than one SPP-wave mode can be launched for multi-analyte sensing.

We recently implemented the TKR configuration with a lanthanum-fluoride CSTF deposited on top of an aluminum thin film.12 We used a prism made of the dense flint glass known as SF11 and only p-polarized light. When the pores of the CSTF were occupied by air, three different SPP-wave modes were launched. Infiltration of the CSTF by deionized water (nH2O = 1.33) reduced the number to two. These two modes are indicated by the reflectance dips labeled 1 and 2 on the solid blue line in Figure 3. When a 0.367M aqueous solution of sucrose (nsuc-sol=1.351) was the infiltrant, both reflectance dips shifted to higher values of θ. The shifted dips are labeled 1 and 2 on the dashed red line in Figure 3. Both shifts individually offered dynamic sensitivities of 90° per refractive-index unit (°/RIU) or higher, which are comparable to state-of-research values of ∼85°/RIU.13 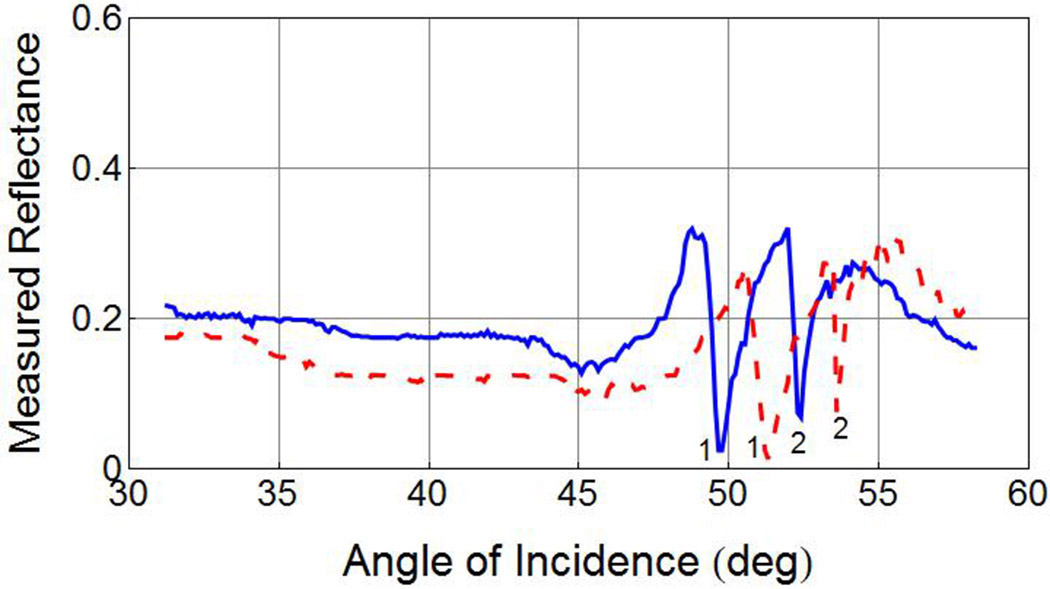 In summary, we have confirmed that a CSTF can be used in a surface-multiplasmonics-based optical sensor of analytes. Such a sensor could be used to estimate the concentration of a single analyte in an infiltrant fluid robustly because of the availability of more than one SPP-wave modes for measurement. It could also be used to sense more than one analyte simultaneously. We are now working to make a sensor with greater reliability and equal or greater sensitivity by replacing the angular-interrogation method with surface-plasmon-resonance imaging, which measures the change in reflectance intensity as a function of wavelength and/or angle of incidence.

Stephen Swiontek obtained his BS in applied physics at Lock Haven University in 2010, and his MS in engineering science at the Pennsylvania State University (Penn State) in 2012. He is currently a PhD candidate at Penn State. His research interests include sculptured thin films, optical sensors, and surface multiplasmonics.

Drew Pulsifer received his BS in physics from Millersville University in 2008 and his MS in engineering science from Penn State in 2010. He is currently a PhD student at Penn State. His research interests include bioreplication, forensic science, sculptured thin films, and surface electromagnetic waves.

Akhlesh Lakhtakia is the Charles Godfrey Binder Professor of Engineering Science and Mechanics at Penn State. He received his BTech and DSc in electronics engineering from Banaras Hindu University, and his MS and PhD in electrical engineering from the University of Utah.