How much water is seeping off the Three Gorges Reservoir?

The Three Gorges Reservoir (TGR) and dam in central China constitutes one of the largest hydropower-generation projects in the world. The reservoir stretches upstream to Chongqing and has an official length of 660km, a surface area of 1040km2, and a static storage capacity (water volume) of 39.3km3 at its highest constraining water level of 175m above sea level, which is ∼110m above its downstream water level (see Figure 1). The water impoundment (i.e., filling) and operation of the TGR serve as controlled experiments amenable to a range of ecological and other studies. 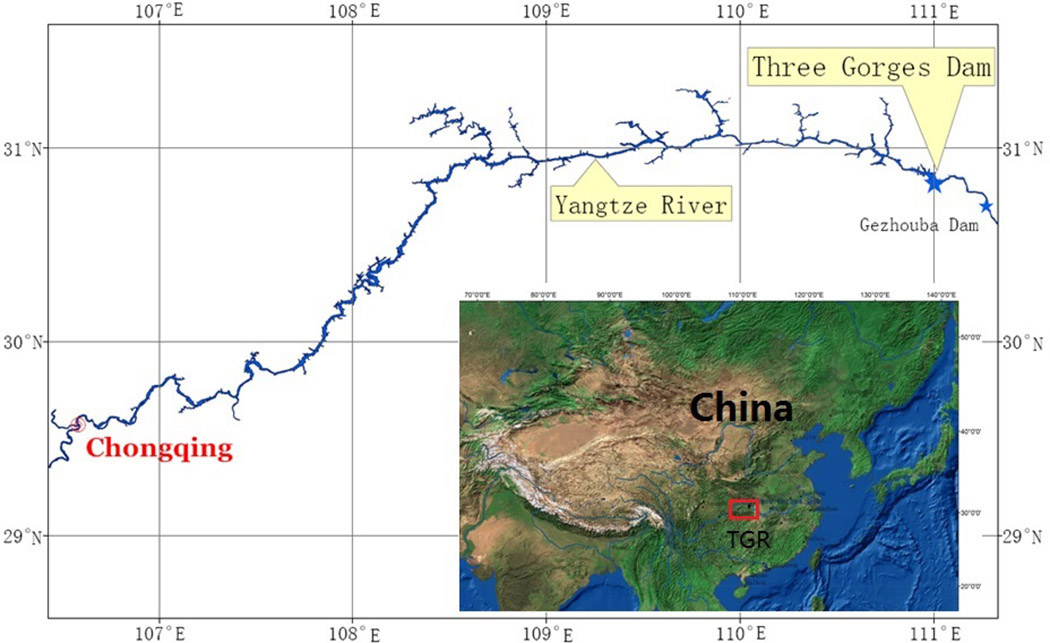 Figure 1. Location of the Three Gorges Reservoir (TGR) in China.

Water impoundment in the TGR initially occurred in three main stages. The water level first rose from ∼70m to 135m in June 2003, then reached 156m on 27 October 2006, and finally increased to 172.3m on 4 November 2008 and 174.9m on 25 October 2010 (see Figure 2). Since then, the water level in the reservoir has followed an annual cycle,1peaking at 175m for power generation and navigation during winter months (from November to February), then gradually declining to 150–170m for downstream irrigation and navigation in spring (March–May), and finally reaching its lowest constraining level of ∼145m for flood control during most of the monsoon season (June, July, and August). Impoundment starts again at the end of the flooding season in September each year. 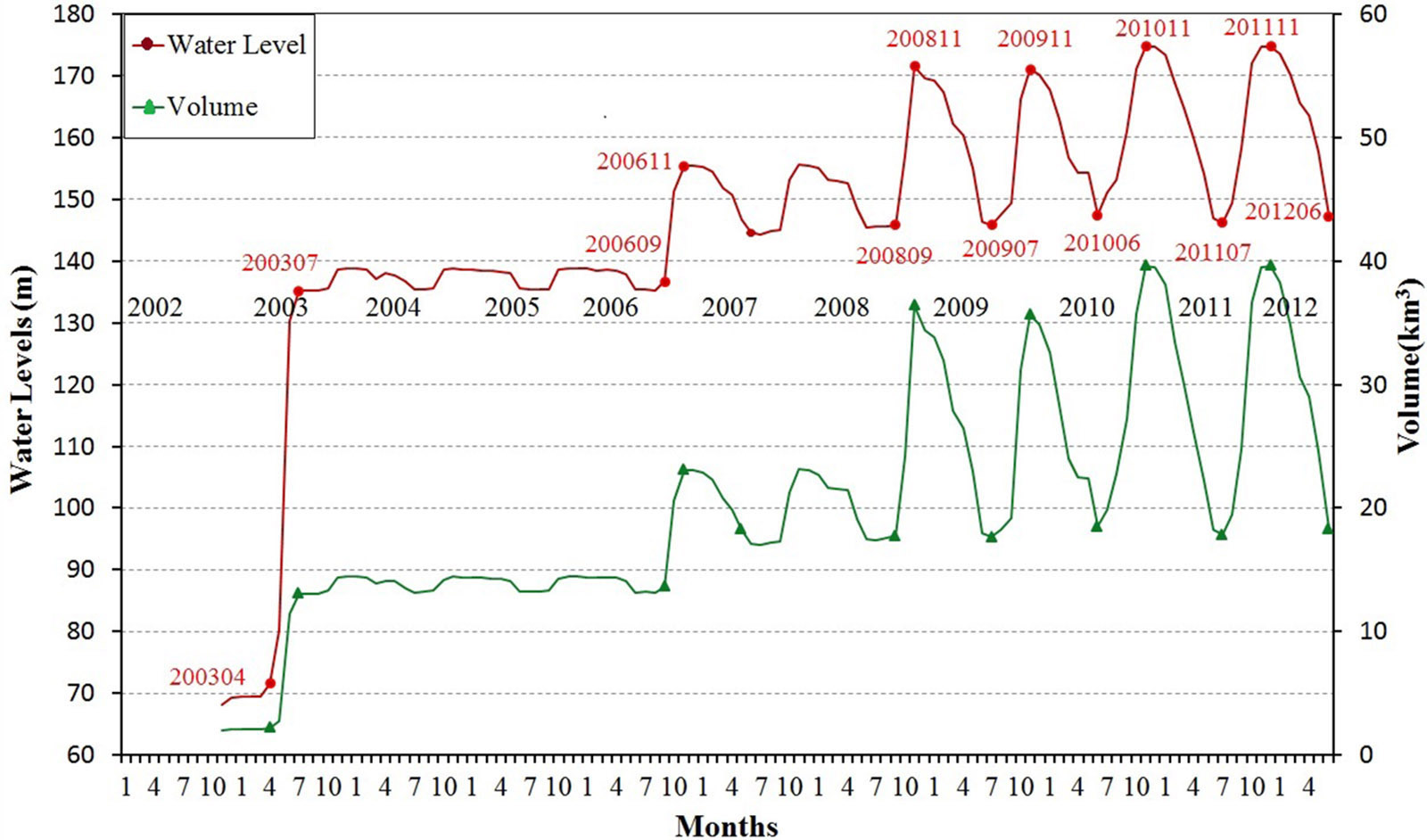 Figure 2. Time evolution of the impoundment of the TGR according to official reports of water elevation and volume.

One question we are investigating is how much water is seeping into the neighboring areas of the TGR and recharging groundwater during impoundment. Deliberate recharging of groundwater is a widely used method of preserving a supply of drinking water. However, over-recharging due to seepage carries the risk of problems such as diminished levee security, landslides, land subsidence, and earthquakes. Field well (in situ) monitoring provides reliable data about changes in groundwater levels, but only at a limited number of sites. Consequently, the overall picture of total water storage changes in the TGR area is incomplete. Currently, the best way to estimate changes in the total water mass, and thus groundwater changes, is through data from the Gravity Recovery and Climate Experiment (GRACE), a dedicated dual-satellite mission launched in March 2002 as a joint partnership between NASA and the German Space Agency. GRACE delivers monthly observations of the total mass changes across the earth at ∼400km resolution.

According to basic principles of hydrology and water balance, changes in total mass/water storage (ΔTWS) in the TGR area could be expected to be caused mainly by water impoundment (ΔTGR), groundwater storage change due to TGR seepage (ΔGW), and natural variations in soil moisture (ΔSM). That is, ΔTWS=ΔTGR+ΔGW+ΔSM. In an initial study,2 we obtained changes in total mass/water storage (ΔTWS) in the TGR area from GRACE observations. We also simulated ΔSM using the WaterGAP Global Hydrology Model (WGHM).3 If negligible water was being lost by seepage into groundwater (ΔGW=0), the residual (i.e., difference) between the GRACE estimate and the WGHM simulation would be equal to the water impounded in the reservoir: ΔTGR=ΔTWS−ΔSM. Our results showed that before 2008, GRACE-WGHM estimates (ΔTWS−ΔSM) agreed with TGR in situ water volume measurements during the first two impoundment phases, but were much greater (11.51 vs. 6.47km3) following the third impoundment phase after 2008 (see Figure 3). This substantial increase might indicate a large quantity of water lost (ΔGW≫0) from the TGR in the recharge of the underlying aquifer, especially when water levels increased from 156 to 175m in October of that year.2 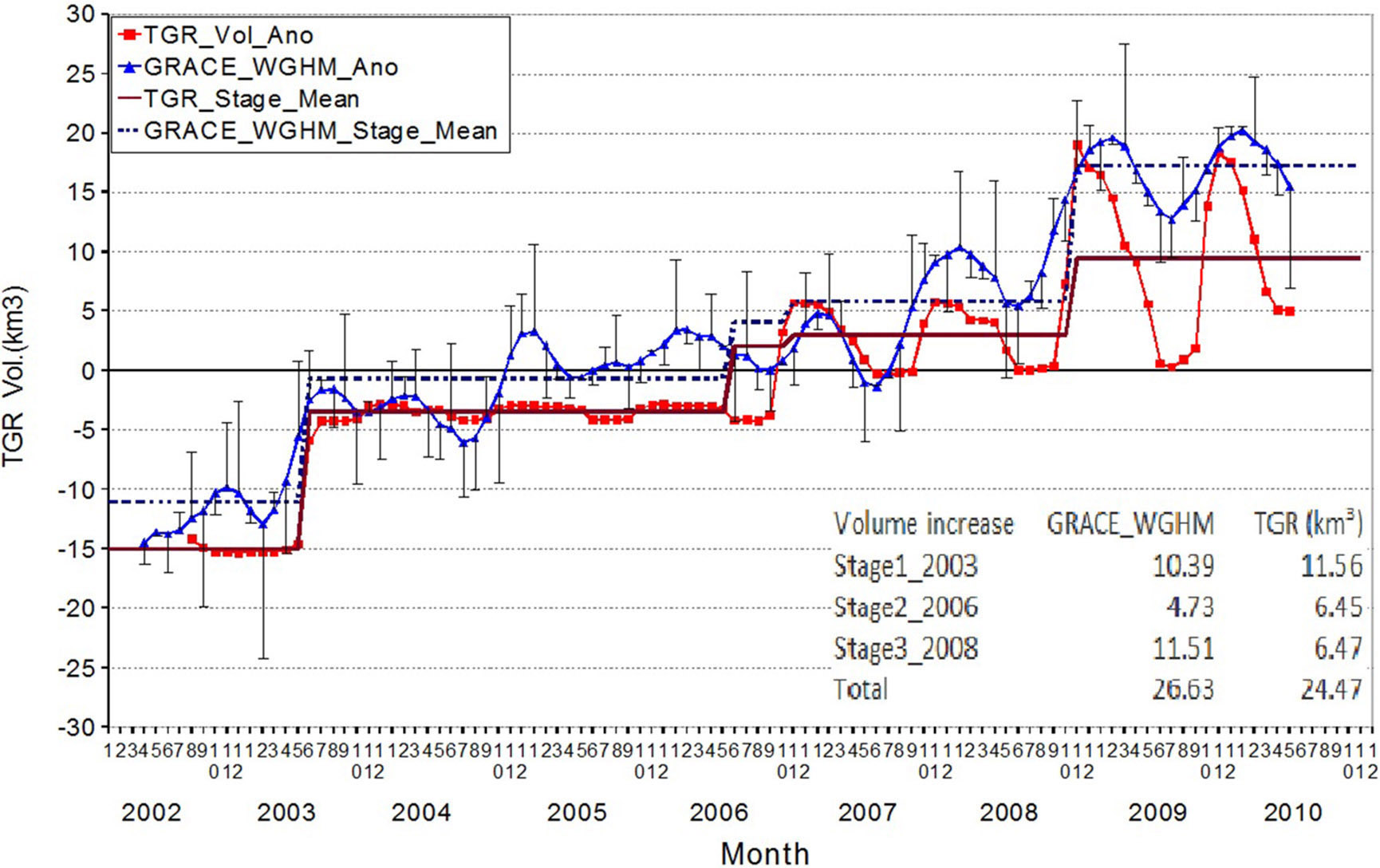 Figure 3. Water volume changes obtained from TGR in situ observations and from Gravity Recovery and Climate Experiment (GRACE) and WaterGAP Global Hydrology Model (WGHM) estimates. The volume change values in the inset table represent the difference of mean volumes computed for two consecutive periods from both sources. The averaging periods of June 2002–May 2003, June 2003–May 2006, June 2006–May 2008, and June 2008–May 2010 represent the pre-filling, first, second, and third stages of TGR impoundment, respectively. Ano: Anomalies. (Adapted from Wang et al.,2 Figure 4B.)

The total impounded water volume of the TGR consists of static volume and wedge storage (created during a flood wave when inflow exceeds outflow). Our most recent study1 showed that in situ stored water volumes were reported by the China Three Gorges Corporation,4 which operates the TGR, as near static. In other words, the measurements only took into account the water level at the dam and neglected the actual water surface profile along the reservoir's 660km length. For example, on 24 July 2012 the water level at the dam was 156m, yet the volume was reported as 24.0km3. That is equivalent to assuming a flat surface along the reservoir at 156m. This assumption holds up during times of steady flow, but it underestimates real volume during the flooding season. In fact, on 24 July 2012 the water level in Chongqing at the upstream tip of the reservoir was 187m, forming a wedge of storage of ∼5km3 within the reservoir. Such an omission could cancel out about 5% of the water mass difference between the GRACE-WGHM estimates and the TGR-reported volume changes. Nonetheless, the groundwater increase due to TGR impoundment is still significant.

In summary, the combination of GRACE observations, global hydrological modeling, and in situ observations taken together provide an indirect estimate of groundwater storage increase due to reservoir seepage and associated groundwater recharge increase in the TGR area. After correcting for wedge storage (particularly large during peak flooding), the groundwater increase due to the TGR impoundment is still substantial. The finding of an error in reporting the total water volume in the TGR reduces the uncertainty of groundwater recharge estimates. As a next step, we plan to employ a range of data, such as well-monitoring data, Landsat images, and other information pertaining to the neighboring lake and reservoir to quantify the total water mass changes beyond the TGR. So doing will enable us to refine the estimate of total seepage and groundwater recharge resulting from operation of the reservoir.

Xianwei Wang is an associate professor whose research is primarily focused on remote sensing of hydrology and climate change.