Selective structuring of metals at the nanometer scale enables us to produce metamaterials with new and interesting optical properties, such as a negative refractive index. Metamaterials could find applications in perfect lenses, transformation optics, or beam and polarization control devices. In most cases, these phenomena can be attributed to the excitation of collective electron oscillations (so called plasmonic modes) in the metallic building blocks of the metamaterials. In the last couple of years, experimental and theoretical investigations have shown that electromagnetic interactions between the building blocks can have great influence on the properties of the whole metamaterial. Thus, a thorough understanding of these coupling effects is important for further progress in the field.

The distance between two neighboring building blocks of a metamaterial is ideally much smaller than the relevant wavelength of light. Hence, a great wealth of information regarding the electromagnetic interactions between the building blocks is encoded in the plasmonic near-field distribution (i.e., the distribution close to the metal nanostructures). However, in most optical experiments, this information is not directly accessible. Instead, coupling effects can be indirectly investigated by measuring shifts of the plasmonic resonance frequency in the optical transmittance or reflectance spectra. Additionally, most optical experiments are only sensitive to so-called bright modes, which efficiently radiate into the far-field and into the detector. In contrast, modes that are confined to the near-field region are not directly accessible in most optical experiments. However, these so-called optical dark modes play an important role in the coupling of nanostructures, so they are important for our understanding of the properties of a given metamaterial.

Scanning-transmission-electron microscopy combined with electron-energy-loss spectroscopy (STEM-EELS) is a valuable extension of optical far-field experiments to study the plasmonic near fields of metamaterials.1, 2 In STEM-EELS, a tightly focused electron beam (probe size <1nm) is scanned line by line over the metamaterial. Due to the interaction of the electrons with the metallic nanostructures, the electrons ‘lose’ the resonance energy of the excited plasmonic mode from their kinetic energy. At every position, an electron energy loss spectrum is recorded. (We measure for every ‘energy loss’ the number of electrons whose kinetic energy is reduced by this amount.) Strong EELS signals occur if the excited plasmonic mode has a strong electric field component that is oriented parallel to the electron beam (along the z-axis). Therefore, the measured 2D EELS maps are related to the distribution of the Ez-component in the metamaterial. 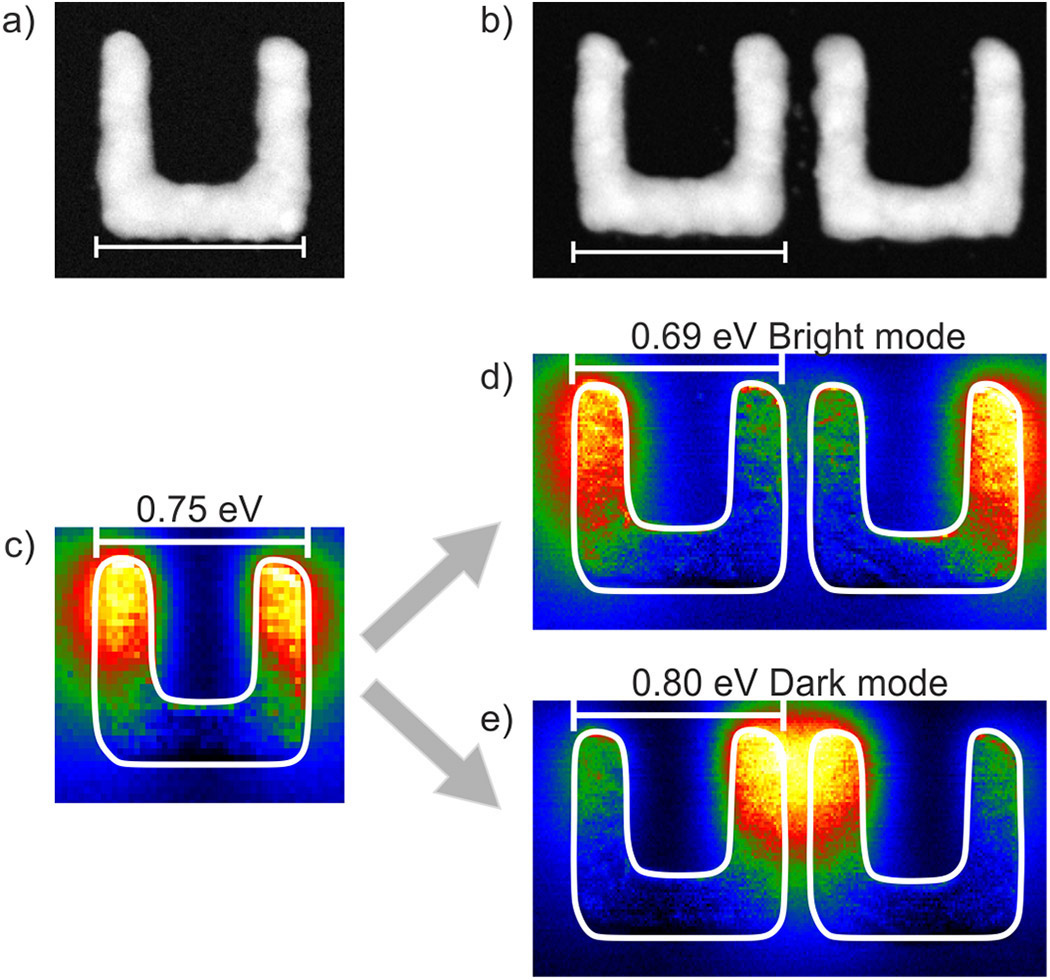 Figure 1. Dark field images of (a) a split-ring resonator (SRR) and (b) an SRR dimer. (c) Electron-energy loss spectroscopy (EELS) map of a single SRR. (d,e) EELS maps of an SRR dimer, showing the two new modes—red-shifted and blue-shifted, respectively—resulting from electromagnetic coupling. The white lines indicate the boundaries of the SRRs. The scale bar is 200nm.

The split-ring resonator (SRR) has served as the building block of many metamaterials: see Figure 1(a) and (b) for dark-field images of a single SRR and an SRR dimer. In our recent experiments,3 we investigated the transition from a single SRR element to a metamaterial to identify the role of coupling effects in metamaterials. For the single SRR, the EELS map of the fundamental plasmonic resonance shows strong signals at both ends of the SRR which originate from a standing plasmonic wave along the entire SRR with antinodes of the charge density oscillation at the two ends of the SRR: see Figure 1(c). Considering now a SRR dimer (two SRRs next to each other), we can see how coupling arises. Without coupling, the resonance energies of the fundamental modes of both SRRs would be identical. However, the electromagnetic interaction between the two SRRs lifts the energetic degeneracy and results in the formation of two new eigenmodes.3 For the red-shifted mode, we find strong maxima at the outer arms of the dimer while the blue-shifted mode has a strong maximum in the middle of the dimer: see Figure 1(d) for the red-shifted mode and Figure 1(e) for the blue-shifted mode. In terms of the plasmon hybridization model,4 we can connect these two resonances to an optical bright mode and an optical dark mode, respectively. Note that the optical dark mode cannot be observed in most optical experiments.

Increasing the number of interacting SRRs increases the number of eigenmodes. For example in the case of four SRRs, we expect four different modes (not shown).3 If we consider a metamaterial, consisting of thousands of SRRs, we anticipate the spectral width of each eigenmode to be much broader than the spectral separation between two adjacent modes. Thus, we expect the formation of a quasi-continuum of modes (see Figure 2 for an EELS-map of such an array). Here, the EELS maxima are concentrated between the arms of neighboring SRRs. 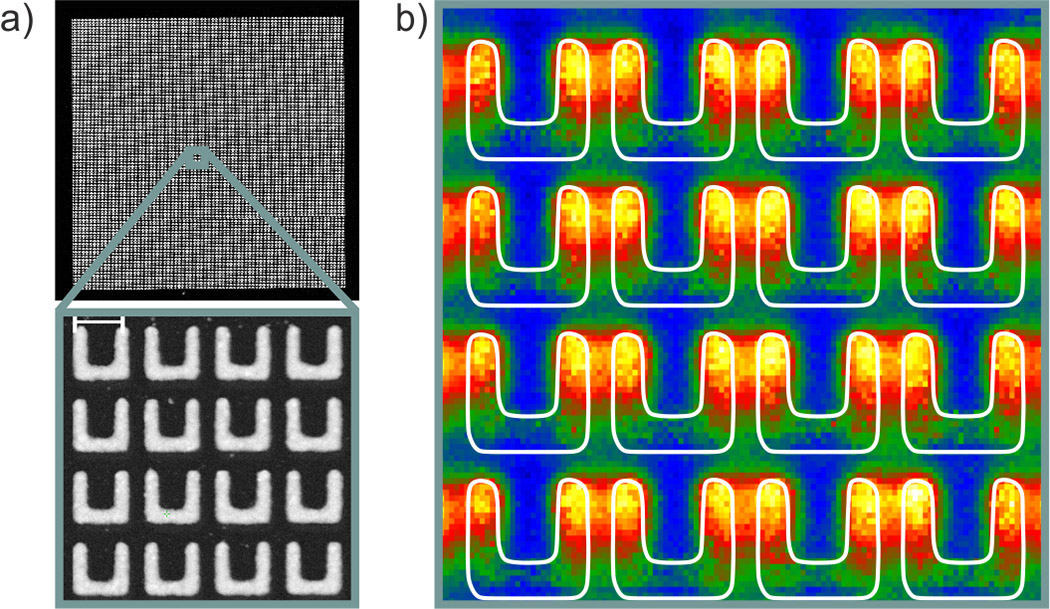 Figure 2. Dark-field image of a 100 × 100SRR array with a close-up of the interior. (b) EELS map of the interior of the array, showing homogeneous distributed mode profile. The white lines indicate the boundaries of the SRRs. The scale bar is 200nm.

In summary, STEM-EELS allows us to visualize the different plasmonic modes of nanostructures and photonic metamaterials. It is thus an excellent tool to study the electromagnetic coupling between the building blocks of a metamaterial. STEM-EELS' advantage, compared to optical experiments, is the nanometer resolution and the ability to map modes with a vanishing electric dipole moment (dark modes). This allows us to identify the appearance of distinct modes in small ensembles of SRRs and, in the case of an SRR array, the formation of a quasi-continuum. As a next step, we will investigate the influence of intentionally introduced defects on the properties of metamaterials. For this purpose, we will change the size or the orientation of single SRRs in the array and use STEM-EELS to perform local spectroscopy.

We gratefully acknowledge the financial support of the German Research Foundation (LI 1641/2-1).