Shortly after the construction and operation of the first optical laser, designs for hard x-ray (that is, >10keV) laser systems were proposed.1, 2 Since that time, scientists have endeavored to build such a device3–7 because of the wide application that the collimated (i.e., with parallel light rays), coherent beam of femtosecond keV x-ray pulses will find in science, technology, and medicine. For instance, such an instrument could be used for tumor radiotherapy without damaging surrounding tissue.

A laser consists of two main components: the resonator and the amplifying (or ‘gain’) medium. The resonator is a system of mirrors that can set up standing waves for the desired frequency of light, and the gain medium amplifies the light that passes through it. There are several severe problems to be solved for both components when building a keV x-ray laser. Atoms emit x-ray radiation when electrons move from a higher to a lower electron shell, and one restriction is the femtosecond lifetime of inner-core electron states. Another is the very low reflectivity of available ‘mirrors,’ which are carefully chosen crystals. In addition, the reflecting crystals' Bragg angle must match exactly with the x-ray laser line wavelength. Atomic inner-shell ionization pumped by very short electron or x-ray pulses has been proposed2 as a possible means for achieving gain, and, in fact, gain at 1.146nm has been obtained by pumping neon gas with x-ray pulses.7

We designed and built the first keV x-ray laser resonator composed of four highly oriented pyrolytic graphite (HOPG) crystals (see Figure 1).8 For a complete round trip, a Bragg diffraction angle θB of 45° is necessary (that is, the angle between the direction of the incident beam and the resulting diffracted beam). The graphite lattice spacing, d, is 1.677Å. Reflection from the crystal plane is denoted by the Miller index (004) has θB=45° at 2.37Å, which coincides with the wavelength of the neodymium x-ray emission line denoted Lα. Another possibility for resonator crystals is diamond crystals,9 which have much higher reflectivity than graphite. However, the Bragg diffraction acceptance angle is very narrow (of the order of arcseconds for diamond crystals), which, in addition to the very low probability of the required exact x-ray wavelength and Bragg angle match, means that such a cavity would be very difficult to align. Using highly reflective HOPG graphite crystals offers an attractive possibility for a low-loss x-ray laser resonator. 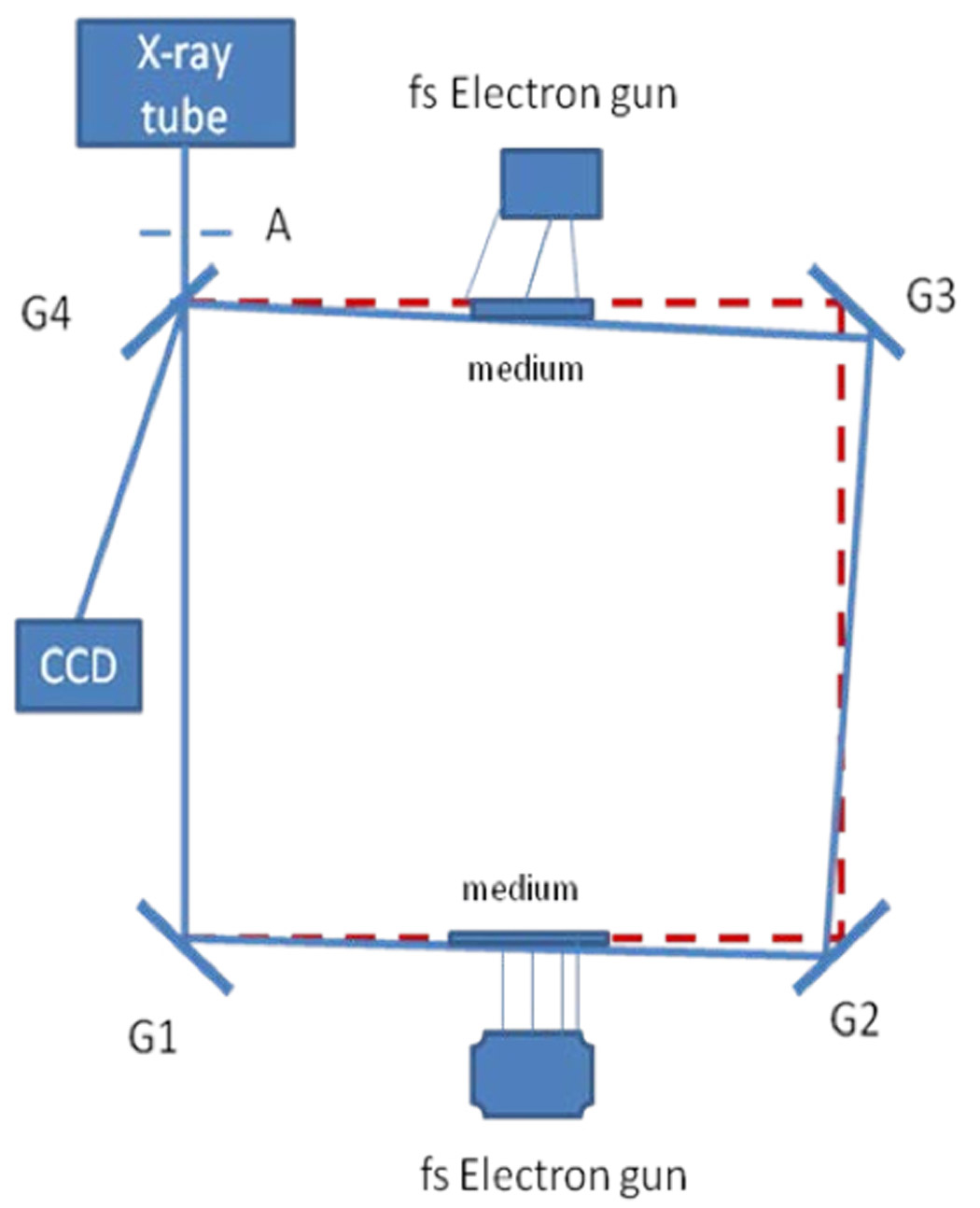 Figure 1. Schematic representation of path traversed by the x-ray beams for two wavelengths in a four-crystal laser resonator. Dashed line: path taken by the neodymium ‘Lα’ (5.27keV) x-ray photons making complete round-trips in the resonator. Solid line: path taken by the chromium ‘Kα’ (5.41keV) x-ray photons and of the x-ray photon beam used to measure the reflectivity, losses, and change in divergence as it propagates in the cavity. G1, G2, G3, and G4 designate the location of the highly oriented pyrolytic graphite (HOPG) crystals. Reprinted with permission.8

We constructed and tested an x-ray laser resonator using four HOPG crystals (15mm×15mm×1mm) using the chromium (Cr) 2.29Å (5.41keV) x-ray line, known as Kα, provided by a continuous-wave Cr x-ray tube. The Bragg angle for this wavelength is 43.1°, for (004) reflection, and therefore this resonator will have a spiral shape (see Figure 1). A ring resonator may be formed, for this x-ray line, with three HOPG crystals and a fourth crystal that has θB=50.7°. The distance between reflecting crystals was approximately 10cm and the accumulated deviation from the Bragg direction, in a round trip, can be as large as the acceptance angle of the crystal. The Kα line profile has a width of 0.2° (FWHM) and its image was recorded by the CCD camera (see Figure 2). The reflectivity from the HOPG crystals was 20%. We measured 3×103 x-ray photons/sec reflected by the last reflecting crystal after one resonator round trip. After one round trip in the cavity, the divergence improved from 2.5mrad to 0.6mrad. The x-ray laser beam exits the resonator through a micron-thick Bragg crystal. 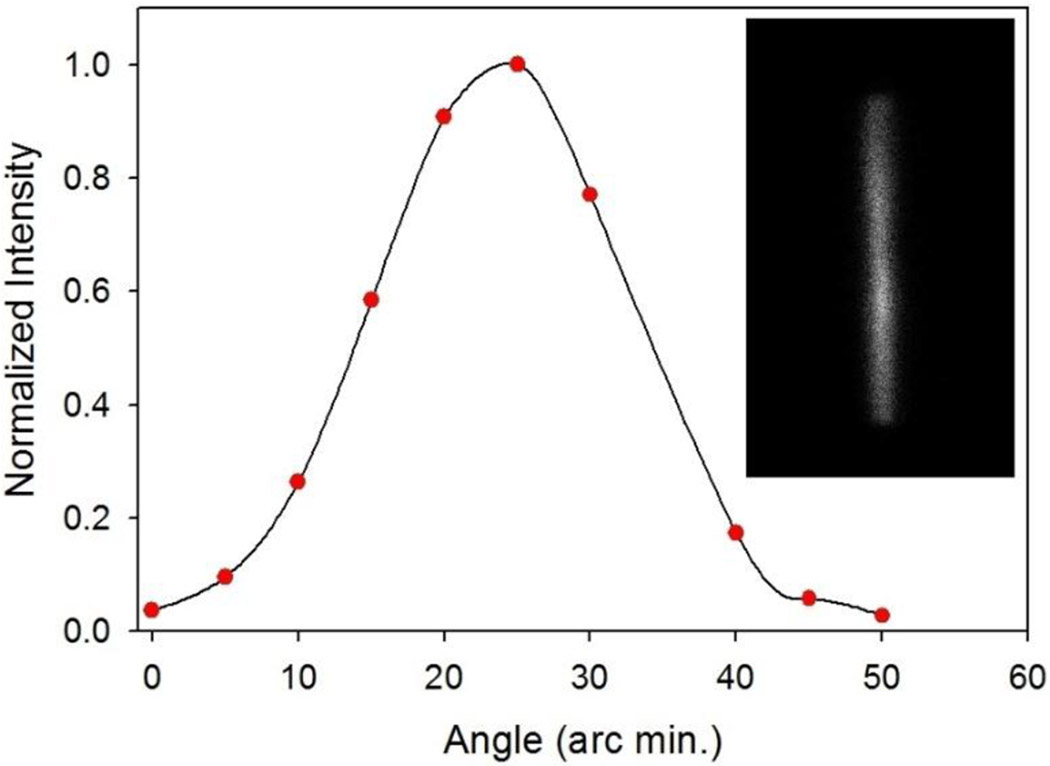 We are working to build this type of x-ray laser resonator, combined with an amplifying medium, into a small, table-top size, keV x-ray laser. The amplifying (gain) medium will be placed inside the resonator as shown in Figure 1. It may be a gas, a thin liquid jet, or a thin solid film consisting of atoms that emit x-ray photons at the Bragg wavelength of the resonator crystals. We will need to pump the gain medium by high-intensity, femtosecond electron pulses10 in a traveling wave geometry, such that the excitation pulse will coincide with the travel of the x-ray pulse within the gain medium. The excited Kα and Lα core electrons have lifetimes of 2–10fs, so the synchronization must be in this femtosecond range with submicron spatial overlap. We anticipate emitted x-ray pulses will be characterized by a sharp spectrum, low divergence, and increased special and temporal coherence.

Such a table-top x-ray laser would find numerous medical, industrial, and scientific applications. Collimation, high power in the keV region, and a small spot size would make it possible to perform tumor radiotherapy without damaging surrounding tissue. It would also be useful for medical and industrial x-ray imaging, and make nanometer-scale devices and storage bits of Ångström size possible. They would also be useful for most optical experiments in the hard x-ray range, including those with non-linear phenomena, x-ray Raman spectroscopy, frequency mixing, and real-time observation of ultrafast processes, such as electron and proton transfer in biological and chemical systems.11 Our future work will address these applications.

Peter M. Rentzepis holds a University of California Presidential Chair and is a professor at UCI. He is a member of the US and other countries' Academies of Science. He and his research associates Jie Chen, distinguished researcher at Shanghai Jiao Tong University, Ivan Tomov, and Ali Er have received several national and international awards in chemistry and physics, published over 500 peer-reviewed papers, organized and chaired society conferences, and served as editors of conference proceedings.