An infrastructure for measurement and characterization of circuits and devices in the terahertz region of the spectrum has begun to emerge over the past several years. Vector network analyzers operating at 1THz and above are now commercially available, and national metrology laboratories in Europe, Japan, and the United States are currently evaluating standards for waveguides, interfaces, and calibration for accurate terahertz measurements. Modern terahertz components are commonly fabricated as integrated circuit architectures on a single chip with planar transmission lines serving as the primary interconnect. Although these circuits are usually interfaced with instrumentation and characterized with measurement fixtures equipped with waveguide flanges, such fixtures are known to introduce significant sources of uncertainty and error in measurements. It is preferable in most cases to measure devices in-situ, directly on the wafer, thus eliminating the need to de-embed the device response from that of a housing or fixture. This approach is standard in the RF and millimeter-wave region and is accomplished using a probe station equipped with coplanar launchers. Coplanar launchers have an inner (signal conductor) and two outer (ground) conductors, making it easy to pass the signal to a coplanar waveguide.

Commercial coplanar waveguide probes are available through the WR-2.2 waveguide band (325–500GHz), but little infrastructure currently exists for on-wafer measurements above this frequency range. Our research has focused on extending on-wafer measurement capabilities to terahertz frequencies using micromachined probes fabricated on thin silicon substrates. With micromachining of silicon-on-insulator substrates, high-resistivity silicon carrier membranes as thin as 5μm can be fabricated to support planar transmission line structures, mounting and alignment tabs, and submillimeter-wave devices. This is the approach we use to make silicon-based micromachined on-wafer probes for characterizing planar devices and components over the WR-1.5 (500 to 750GHz) and WR-1.2 (600 to 900GHz) waveguide bands.1, 2 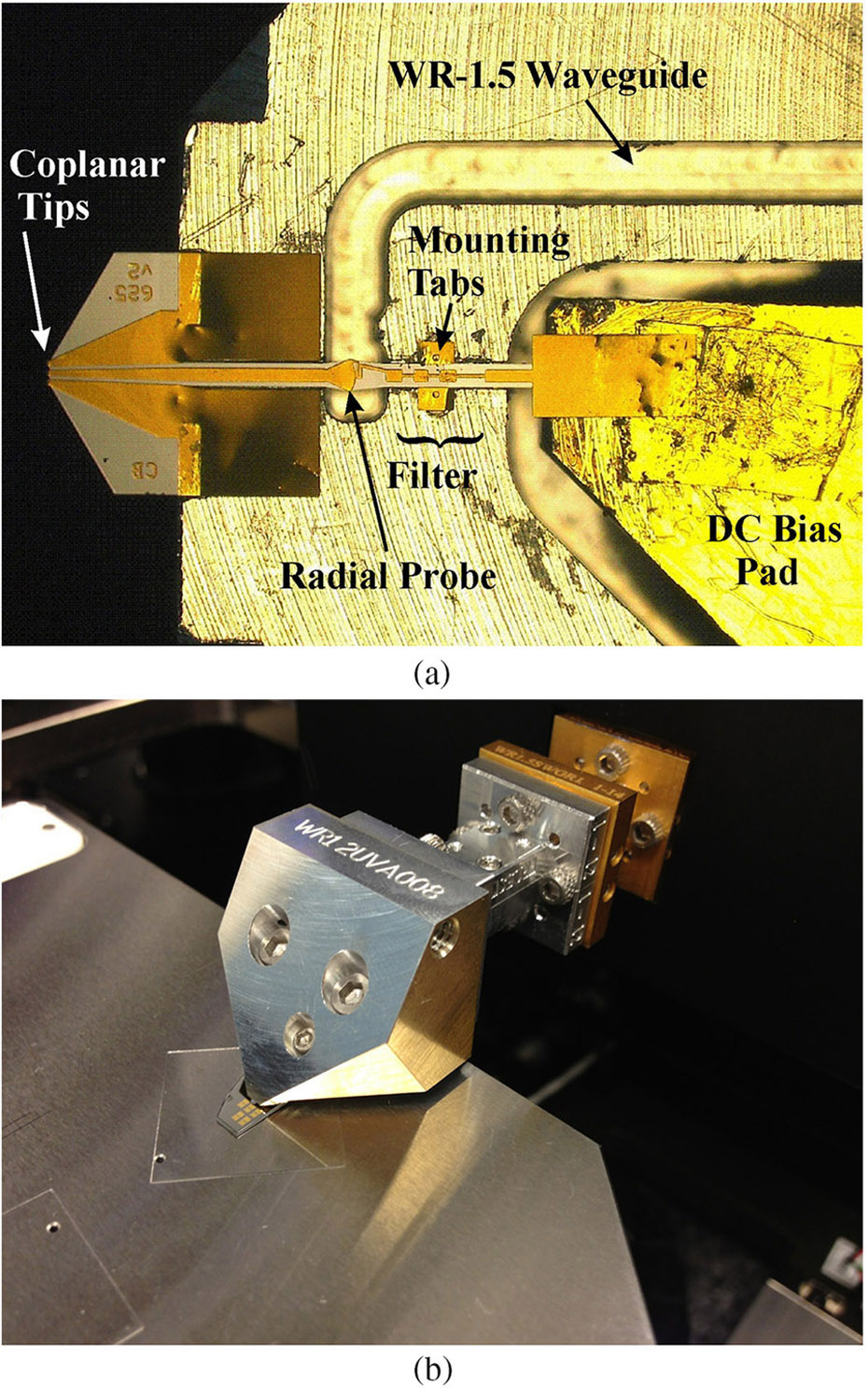 The micromachined probe shown in Figure 1(a) consists of a split-block waveguide housing and an integrated drop-in silicon chip with integrated waveguide probe, mounting/alignment tabs, bias filter, and transition to coplanar waveguide contact tips. Recesses milled into the probe housing serve as clamping areas to mechanically support the probe chip as it flexes in response to contact with a device under test. The probe chip is 750μm at its widest and approximately 1.5mm in length. The silicon is high-resistivity material (>10kΩ-cm) and varies from 15μm thick (for the WR-1.5 design) to 5μm thick (for the WR-1.2 design). The shape of the chip is formed through a backside reactive ion etch which allows chips of non-rectangular geometry to be realized. The RF circuitry on the chip consists of a radial probe that is suspended in the waveguide channel, a planar transmission line that extends to an aperture in the probe housing, and a tapered section that forms the coplanar probe tips. The fully-assembled probe is shown in Figure 1(b). 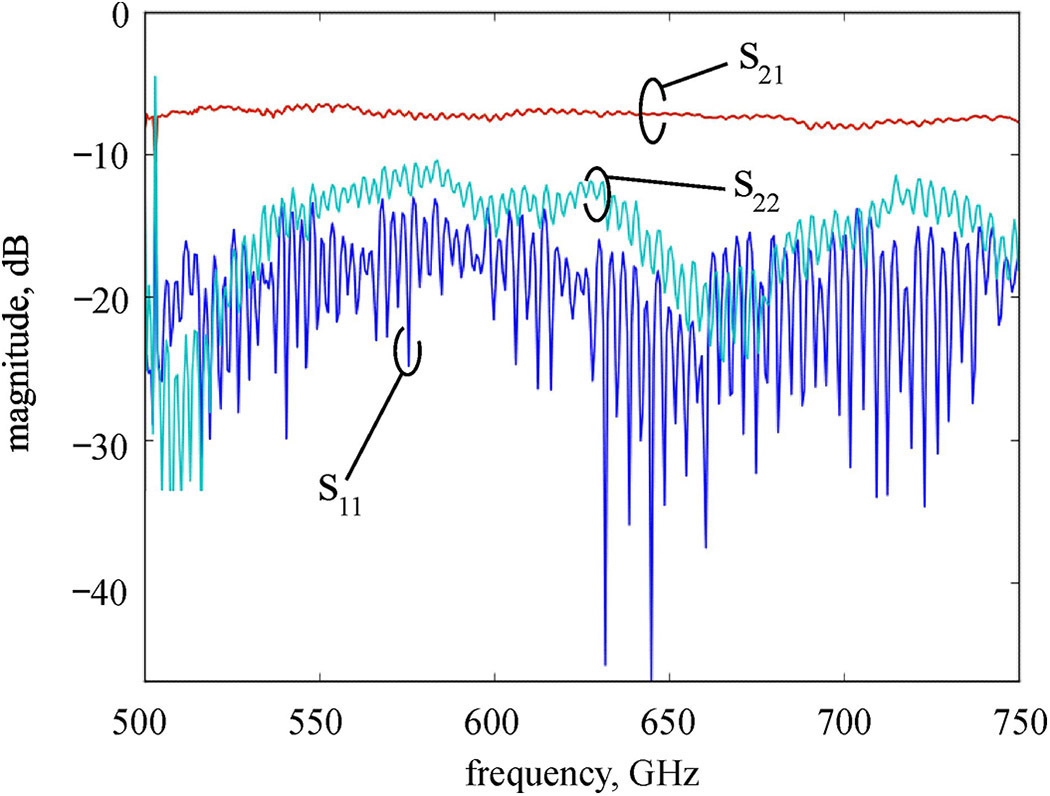 Figure 2 shows measured scattering parameters of the WR-1.5 micromachined probe. The insertion loss (7 to 8dB) was flat across the entire waveguide band, with return loss approximately 15dB. Waveguide loss from the test port to the radial probe (the primary loss mechanism for the probe) contributed approximately 2.6dB to the insertion loss. We also implemented and characterized prototype WR-1.2 (600–900GHz) probes. Our measurements yielded an insertion loss lower than 8dB and return loss of approximately 15dB across the entire band. We found the micromachined probes to be robust. Using a computer-driven stage and commercial load cell to maintain a consistent contact force (20mN), we performed over 20,000 contact cycles using the WR-1.5 probes without significant degradation in electrical performance.

The results above demonstrate that on-wafer measurements can be done well into the submillimeter-wave region. On-wafer probes for the WR-1.5 and WR-1.2 waveguide bands are now available and have demonstrated outstanding RF performance and mechanical robustness. Because the design is based on a milled probe housing and single drop-in chip, replacement of damaged probes is a straightforward process and probe repairs can be done both quickly and multiple times. Furthermore, as the probes are based on silicon micromachining, they are scalable and current efforts are underway to extend this technology for on-wafer measurements to 1THz and beyond. Our next steps will scale the existing probe designs to higher frequencies within the terahertz band and attempt to exploit silicon micromachining and fabrication to integrate sensors and other components into the probes.3 This will allow for more compact, integrated instruments.

Robert Weikle is a professor of electrical and computer engineering at the University of Virginia and a co-founder of Dominion MicroProbes Inc. He has over twenty years of experience researching terahertz electronics, including GaAs Schottky receivers, superconducting detectors, quasi-optical arrays, and instrumentation for submillimeter-wave metrology.