Microscanning is a technique that improves the quality of IR camera and telescope images, with applications for surveillance and remote sensing in particular. Pixels in IR-band cameras are generally large, while the ratio of the pixel size to the wavelength is small (compared with that in a visible wavelength camera). This means that gain in pixel size is often limited by the small-scale design of standard cameras, compromising the resolution of the image produced. To address this, the microscanning process takes multiple sample images of the same target, each slightly displaced along a defined axis, to achieve a significantly higher pixel count in the final image.1 The detector line of sight is displaced half the instantaneous field of view of a pixel in X and Y directions (see Figure 1).

We designed a system that integrates microscanning in a Cassegrain IR telescope to produce high-resolution images. Our system is catadioptric in design (that is, it uses lenses and mirrors for refraction and reflection). It comprises a telescope with two aspherical mirrors and one field lens, with a 50mm focal length corrected for the 7–14μm waveband (see Figure 2). It was designed for the ULIS 04171 microbolometer detector (which converts IR radiation into visible images) with 640×480 pixels and 25μm pixel pitch (the distance between pixels). Later, it was integrated with a ULIS 052501 model, with 1024×768 pixels and 17μm pixel pitch. The full field of view is 24.5° with the ULIS 052501, which is very large for a catadioptric system. 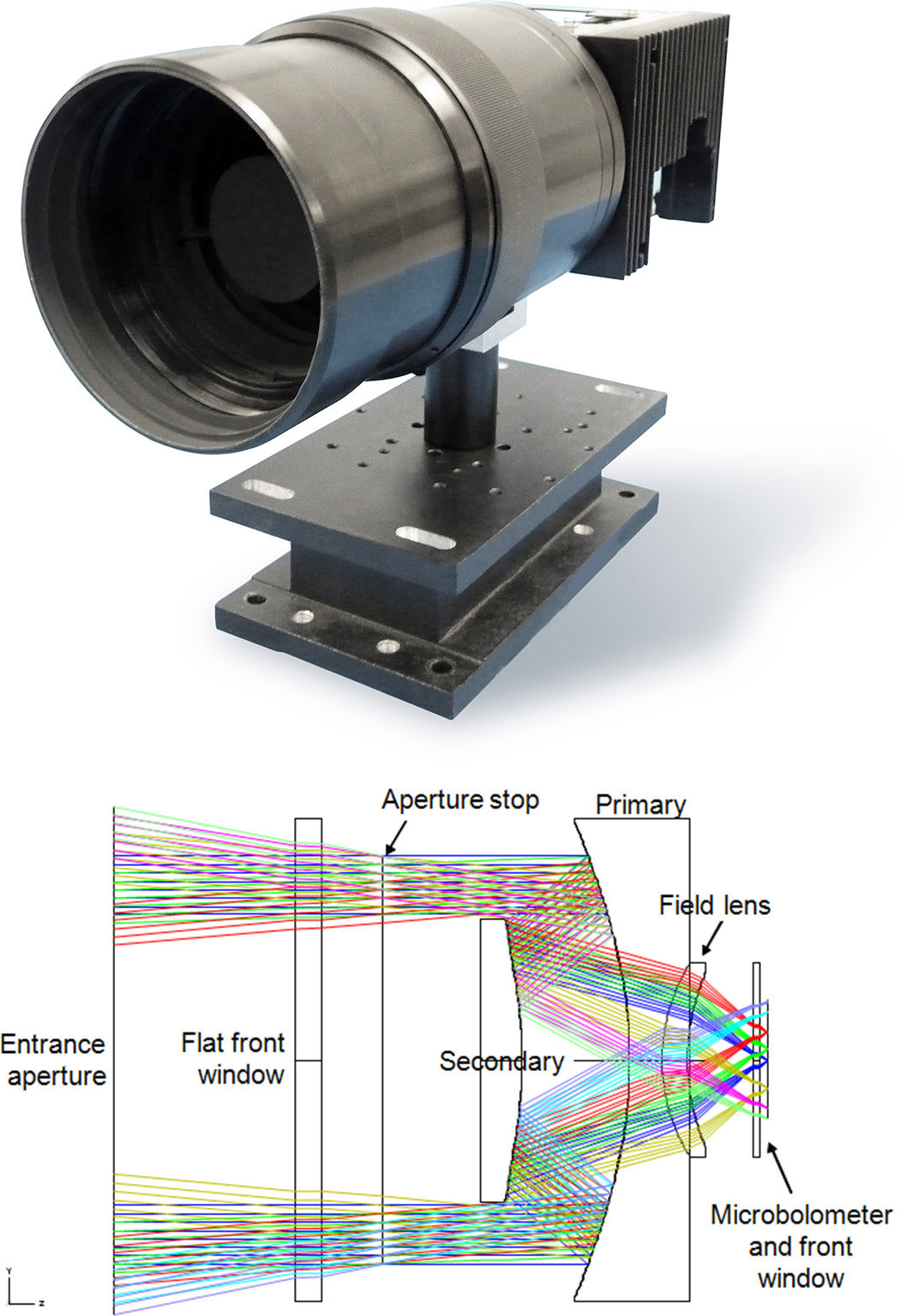 Proper image reconstruction increases resolution, and the system's 1024×768 pixel detector can be used to generate images of 2048×1536 pixels. The optical modulation transfer function (MTF)—a measure of the system's resolution capabilities—does not change, but the effective resolution increases because of the high sampling frequency. Furthermore, the microscan with half-pixel shift reduces the occurrence of aliasing (where signals of different spatial frequencies become indistinguishable from one another, reducing the image quality).

Because the detector size is large relative to the lens focal length, the secondary mirror causes an obscuration of 50%. This phenomenon must be carefully controlled since it reduces the MTF diffraction limit.2 To obtain an effective focal ratio of F/1.05 given the large obscuration, a working F/# of F/0.75 is required. Thus, the system's fast optics necessitate careful alignment. The specifications are summarized in Table 1.2–6 The optics are very compact, but still provide enough room to insert a shutter for calibration purposes. Achieving good optical performance while allowing enough space for the shutter was a challenge for the optical design, as was reducing the effective thickness of the shutter. The system is equipped with a manual focus for object distance ranging from 10m to ∞. The mechanism is designed to withstand harsh environments (in the range −30 to 60°C), and maintains its position even under severe shocks or vibrations.

Table 1.Characteristics of the catadioptric system.

The primary and secondary mirrors are made of the same material. Consequently, the mechanical barrel and the mirrors undergo proportional dimensional changes during temperature variations. The refractive index of the field lens is temperature-dependent, and thus the focal distance changes slightly (+/−50μm). We adjust the manual focus to compensate for this offset over the entire operational temperature range. The barrel is extended and includes a baffle to prevent rays from the scene going straight to the detector, without first going through the optical path. 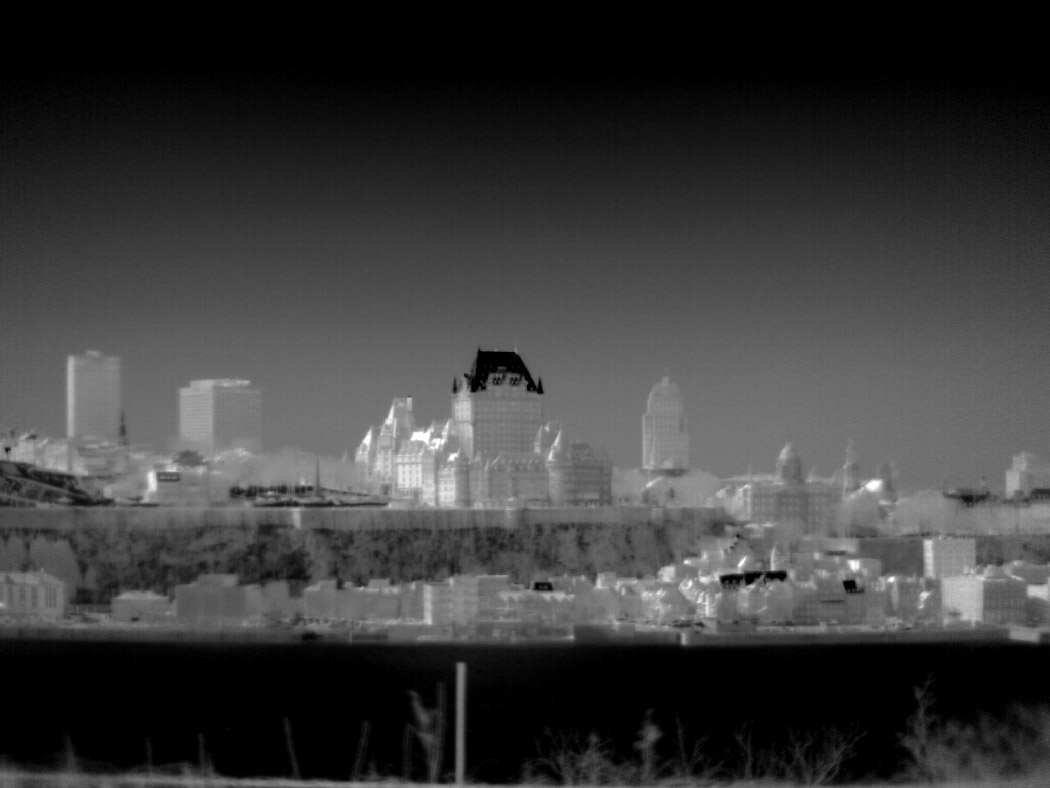 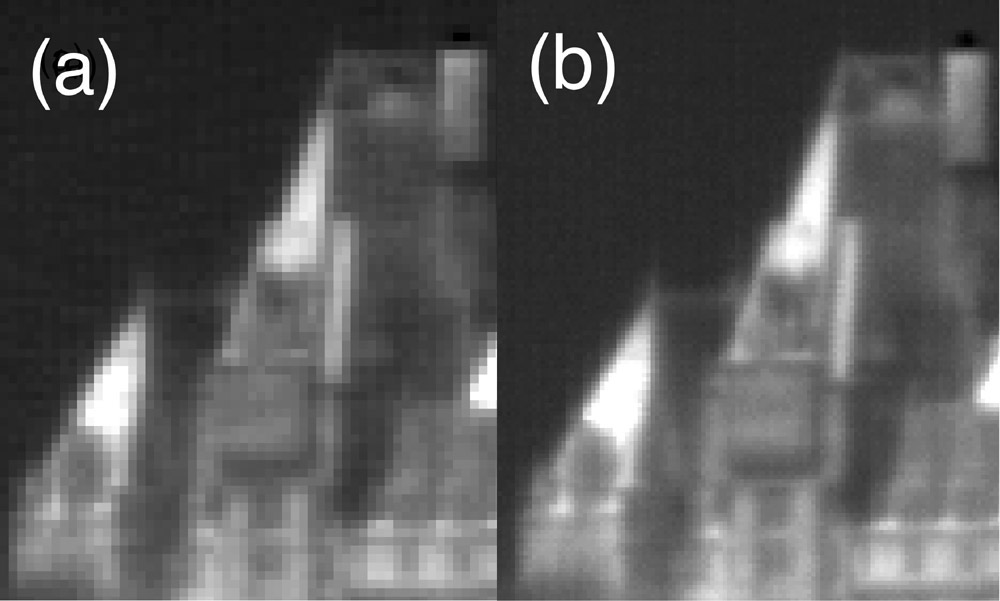 Figure 4. (a) Detail of the image in Figure 3 without microscan. (b) The same detail with microscan.

Figure 3 shows a full field-of-view image of Quebec City, including the Château Frontenac, taken with the catadioptric optics at a distance of 1.5km. Figure 4 shows details from Figure 3, with and without microscan. The gain in definition with microscan is evident despite the efficient pixel pitch (8.5μm) at a wavelength of 7–14μm. The images show how microscanning suppresses aliasing, evident in the left-hand image as the ‘staircase’ appearance of the roof. The telescope-camera system is highly adaptable, and in future could be made compatible with different detectors, to increase even further the achievable surveillance distances.