Silicon atoms crystallize in bonding configurations that are similar to those in graphene, opening up the potential for exceptional electronic properties with possible applications in nanoscale electronics.
07 June 2013
Rainer Friedlein, Antoine Fleurence, Yukiko Yamada-Takamura and Taisuke Ozaki

Silicon, the most commonly used semiconducting material, is intrinsically 3D. Although the element silicon lies directly beneath carbon in the periodic table, it does not easily form the crystalline bonding present in graphite because the arrangement is energetically unfavorable.1 However, if this bonding were to be realized in crystals made of silicon atoms, the resulting material could prove to be as exciting as the ultimately thin—Nobel Prize-winning—2D form of graphite: graphene. It has been predicted2 that with only three strong directional bonds for each atom, instead of the four formed in the diamond structure of silicon, silicene (the silicon analogue of graphene) could possess highly mobile charge carriers with exotic properties.

Despite being predicted to be unstable in ambient conditions,1 we have succeeded in creating silicene on the surface of zirconium diboride (ZrB2), a metallic ceramic material.3 Silicene has also been created by a number of researchers on silver surfaces.4–6 To prove the presence of silicene, a comprehensive characterization of the structural, electronic, and chemical properties is essential. However, the properties of these samples differ from those of the (currently hypothetical) free-standing silicene because the silicene is in close contact with the substrate surface.

The silicene that we produced rests on thin, single-crystalline ZrB2 films with silicon wafers as substrates (see Figure 1). Silicene is formed by surface segregation at elevated temperatures, under ultra-high vacuum (UHV) conditions.3 In this process, silicon atoms diffuse from the silicon wafer to the diboride surface and segregate to spontaneously form silicene. Although the silicene is oxidized on exposure to air, it can be formed again at the same time as the oxide is removed by an annealing procedure in UHV. In this way, we were able to study silicene in different complementary experimental set-ups, using scanning tunnelling microscopy, angle-resolved photoelectron spectroscopy, and a number of other surface science techniques.

Our data provides clear evidence for the presence of a silicene sheet that exhibits lattice-matching with respect to the substrate: see Figure 2(a). As can be seen in Figure 2(b), the honeycomb lattice of silicene is bumpy, or ‘buckled’. Buckling describes the displacement of the neighboring silicon atoms from the plane. Although graphene is perfectly planar, free-standing silicene has been predicted to be most stable in its regularly buckled form because of the interplay of electrostatic interactions related to both electrons and atomic nuclei, which varies between the elements.2 When this silicene is placed on a substrate, individual silicon atoms adopt a different height with respect to the outermost layer of zirconium atoms. This adaptation also enables the in-plane lattice parameters to match those of the substrate surface. 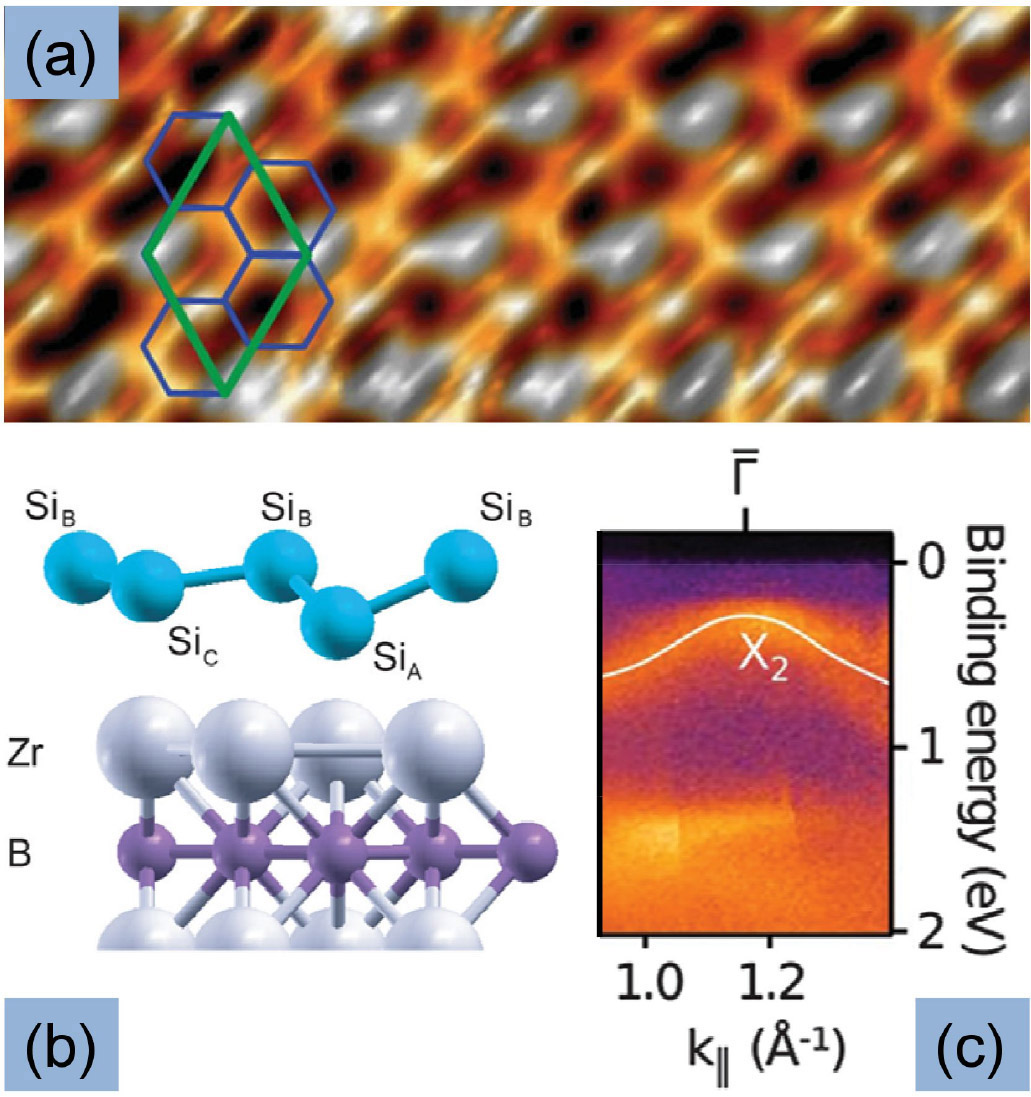 Although the electronic states of silicene are generally expected to mix with those of metallic substrates, our recent experimental results indicate that the interactions of silicene with the ZrB2 surface are rather weak. However, using quantum-chemical calculations, we have found that the internal buckling is responsible for modifying the properties of low-energy electrons in silicene.3 In particular, occupied, low-energy electronic bands—see Figure 2(c)—do not include electrons with zero binding energy in silicene as they do in graphene. Accordingly, although graphene is a semi-metal, silicene on ZrB2 is a semiconductor with a direct band gap,3 which means that the material can emit light much more efficiently than 3D silicon. This important property might enable the use of silicene in electronic devices that emit light or perform logical operations.

The chemistry of silicene provides further points of interest. Our recent, yet unpublished, results indicate that silicene behaves quite differently compared with the reactive surfaces of both 3D silicon and graphite. For instance, although they are unstable at atmospheric conditions, both silicene nanoribbons7 and silicene on ZrB2 films resist oxidation at relatively high oxygen levels. In other experiments, we found that organic molecules physically adsorb on the surface of silicene. Compared with those at the surface of graphite, the inhomogeneous charge density distribution associated with the buckling of silicene causes slightly stronger interactions with the adsorbates.

In summary, with bonding configurations and electronic and chemical properties close to those of graphene, the evidence for silicene on metallic substrates is mounting. The growth with good lattice matching on large-scale silicon wafers via diboride buffer layers provides a way to integrate silicene into existing silicon-based technologies, which currently face intrinsic limitations with top-down approaches. Our next step is to investigate the way in which silicene is formed, and how the interactions with the substrate and non-metallic capping layers will influence its electronic properties. Once created on an insulating platform, silicene—with its specific structural and electronic properties—might challenge the dominance of graphene in nanoscale physics and technological applications.

Rainer Friedlein is an associate professor. He works with photoelectron spectroscopic techniques on the electronic structure of organic materials and organic/inorganic interfaces. His recent work focuses on novel low-dimensional π-electronic materials self-assembled at surfaces.