President Reagan most likely knew that advances in laser technology would give the United States the upper hand in nuclear talks with the Soviets.
16 May 2013
Robert K. Tyson

The advent of lasers and adaptive optics may have strongly influenced strategic weapons treaty negotiations that ended the Cold War. This is the conclusion to my study of events from 1945 to 1991 and personal recollections from the 1970s and 1980s. Specifically, the work considers the development of anti-missile technology and its behind-the-scenes impact on talks between the Americans and the Soviets.1

At the end of World War II, NATO and the Warsaw Pact divided the world into two nuclear superpowers. There was no effective defense against strikes by missiles with nuclear warheads, resulting in the stalemate known as mutually assured destruction (MAD). In the 1960s a series of treaties between the nuclear nations built a diplomatic wall against weapons testing, proliferation, and defenses of launch facilities. However, by the mid-1970s, the United States was working on technologies that could possibly counter the effects of massive first strikes of MIRVs (multiple independently targetable re-entry vehicles). These are ballistic missiles that contain several warheads to reach a number of targets.

The principal aim of the United States was to develop defensive weapons that could attack offensive ones, as soon as possible after launch and essentially while still over the aggressor's territory. This strategy, known as ‘boost phase kill,’ would be an alternative to MAD.

Under consideration were space-based interceptors, anti-submarine warfare, and terminal-phase antimissile missiles (which intercept an object as it re-enters the atmosphere). With the invention and ongoing refinement of high-power lasers from 1960, the United States began to develop new devices, termed ‘directed energy weapons,’ which sought to make use of speed-of-light delivery. One concept was to place defensive lasers in low-earth orbit with enough units deployed to cover the threat area continuously. The other was keeping the high-power lasers on the ground in defensible territory and placing relay mirrors in orbit to deliver the lethal energy to launch sites (see Figure 1). 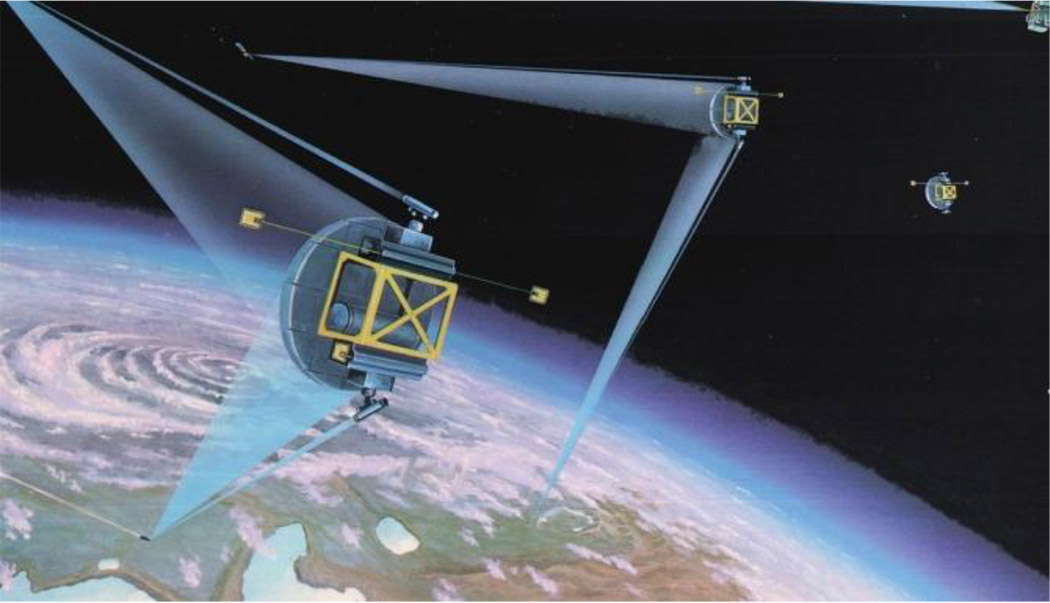 In both scenarios, the lasers would require adaptive optics, the technology to correct a severely distorted laser beam in a space-based platform, or to correct for atmospheric turbulence in the uplink from the ground-based laser to the relays. By March 1983, when President Ronald Reagan made his ‘Star Wars’ speech, the United States had undertaken much classified research to show the viability of directed energy. The Reagan administration created the Strategic Defense Initiative (SDI), which offered long-term, multi-billion-dollar budgets for technology and system designs.

Since 1982 much research has focused on how to get a turbulence-corrected high-energy beam to a relay satellite or even an un-cooperative space target. Every adaptive optics system needed to have a bright beacon near the target or relay to sense the distortions of the path between the laser and the target. Making an artificial star in the upper atmosphere with a separate laser was one solution. Research focused on developing a working, reliable laser guide star system.

Of course, in parallel with the 1980s research efforts, there continued diplomatic efforts to reduce the tension between the United States and the Soviet Union. But after three summits between President Reagan and Soviet president Mikhail Gorbachev (1985 Geneva, 1986 Reykjavik, and 1987 Washington), Reagan refused to dismantle SDI, and Gorbachev, in dire economic straits, capitulated. When Reagan famously told the Soviet leader in 1987 to “Tear down this wall!” he knew that working laser guide stars, functioning adaptive optics, and directed energy weapons would be to his advantage. This, my study suggests, led to the Warsaw Pact being dissolved in 1991. Some may say that it wasn't adaptive optics that ended the Cold War, but rather the very high cost of adaptive optics, which put the technology out of reach for the Soviet Union. That will be a future debate.

Robert K. Tyson is an associate professor of physics and optical science. A Fellow of SPIE, he is the author of seven books on adaptive optics for various audiences, including his latest, Principles of Adaptive Optics, 3rd edition (CRC Press, 2011).