Optical interconnects have an advantage over their electronic counterparts due to their capacity for larger, low-loss data transmission. However, due to the inherent optical limits imposed by diffraction, the size of fiber optic cable is currently limited to ∼1μm. Because of this limit, nanoscale applications are not possible.

Collective charge oscillations (‘plasmons’) may offer a solution to this problem.1–3 By miniaturizing optical signals in the form of plasmons, electronic circuits could be replaced by optical ones. The velocity of plasmons is one or more orders of magnitude smaller than the speed of light, and consequently their wavelength is much shorter compared to that of light with the same frequency. This shorter wavelength enables the use of much narrower wire (4 and possible low-loss transport.5

We have carried out investigations into plasmon transport in graphene at the gigahertz range using time-resolved electrical measurements.6 The samples we used were made from graphene obtained by thermal decomposition of silicon carbide (SiC):7 see Figure 1(a). Square-shaped graphene was fabricated from the SiC graphene wafer by standard photolithography and etching, and chromium/gold (Cr/Au) electrodes were deposited at each of the four corners, one of which served as a detector. The surface was subsequently covered with 100nm-thick hydrogen silsesquioxane and 40nm-thick silicon dioxide insulating layers, with Cr/Au injection gates deposited on top of both samples. For the time-resolved electrical measurements, we applied a voltage step of 1V to the injection gate. This step causes the electron density under the gate to change suddenly, leading to charge excitations around it that then propagate through the graphene in the form of plasmons: see Figure 1(b). We used two samples: one with a large top gate, and the other without. The path length between the injection gate and the detector is 1.1mm in the ungated sample and 0.2mm in the gated sample. All measurements were performed at a temperature of 1.5K.

Figure 1. (a) Atomic force microscopy phase image of graphene on silicon carbide (SiC). Single-layer graphene (brown color in majority regions) covers the substrate, while two or more graphene layers (yellow color in minority regions) are formed along the terrace edge. (b) Schematic illustration of the sample structure and the experimental setup. Graphene was mesa-etched and chromium/gold (Cr/Au) electrodes were deposited on the four corners of the sample, with the upper-left electrode used as a detector. The surface was then covered with 100nm-thick hydrogen silsesquioxane and 40nm-thick SiO2 insulating layers, with Cr/Au gates deposited on top.

In our research, we have shown that the plasmon velocity in our ungated sample decreases from 6×106 to 2×106m/s with an increasing magnetic field. This magnetic field dependence can be explained using the theory for edge magnetoplasmons (EMPs): in a high magnetic field, charge carriers inside graphene are localized and the current flows only along the sample edge. Plasmons in these current channels are called EMPs.8In our gated sample, the electric field of the plasmons is screened by the metal gate, and due to this screening effect the velocity decreases. With a greater carrier density, the velocity increases from 104 to 105m/s (with oscillations). Since the velocity, the refractive index, and the impedance are all functions of the dielectric constant and magnetic permeability, this velocity tunability suggests that the impedance and the refractive index are also tunable. In standard optics, these parameters are altered by changing the material. Our results indicate that, in graphene, it could be possible to control them externally. 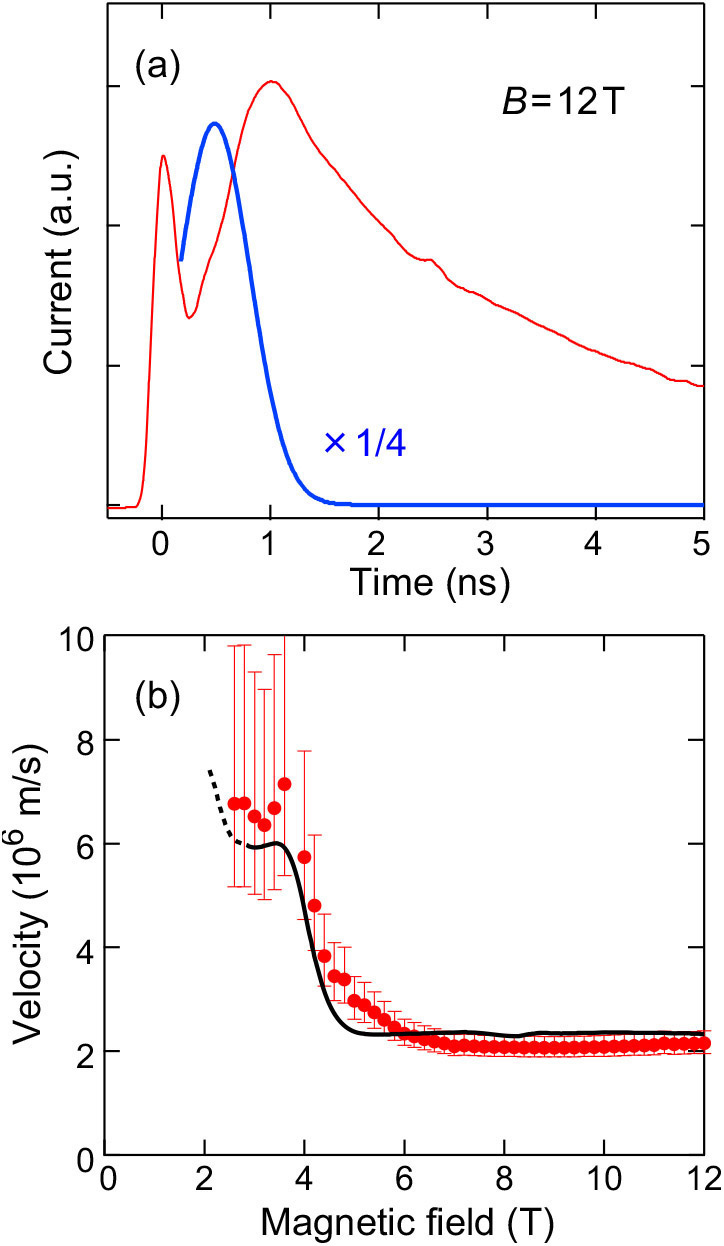 Figure 2. Results in the ungated graphene sample. (a) Current as a function of time at a magnetic field of 12T (red trace). The first peak is due to direct crosstalk between high-frequency lines, and the second shows the plasmon pulse. Since the crosstalk propagates with the speed of light, we set the origin of the time (t=0)at the first peak. By removing the effect of a finite time constant on detection, the waveform of the plasmon pulse is obtained (blue trace). (b) The plasmon velocity as a function of magnetic field. The black line is obtained by a theory based on edge magnetoplasmons. Using the peak position of the plasmon pulse and the path length, we were able to determine the plasmon velocity. Flat regions, observable at magnetic fields of ∼3 and >6T, originate from the quantum Hall effect.

Figure 2(a) shows a typical current trace, comprising two peaks. The sharp peak is due to direct crosstalk between high-frequency lines. The broader peak comes from the plasmon pulse. Using this data, we obtained the waveform of the pulse, which enables the plasmon velocity to be determined. Figure 2(b) shows the plasmon velocity in the ungated sample as a function of the magnetic field (B). As the magnetic field in the ungated sample is increased, the velocity decreases from 6×106 to 2×106m/s with flat regions at ∼3T and for B>6T. It should be noted that, for B<2T, the velocity cannot be determined because the plasmon signal largely overlaps with crosstalk (t=0). The Hall effect arises when a current is subject to a perpendicular magnetic field, causing a Lorentz force on the charge carriers. This force pushes the charge carriers sideways, causing a secondary electric field that runs perpendicular to the direction of current and creating a Hall voltage. The behavior of the velocity in our sample is related to the magnetic field dependence of the Hall conductance and can be reproduced by a theory based on EMPs.8 The width of EMPs is calculated to be ∼10nm and increases with decreasing magnetic field, suggesting that plasmons propagate in a 10nm-wide and one-atom-thick ribbon along the graphene edge. Note that the flat regions originate from the quantum Hall effect, which appears in a high-quality 2D system at high magnetic field. 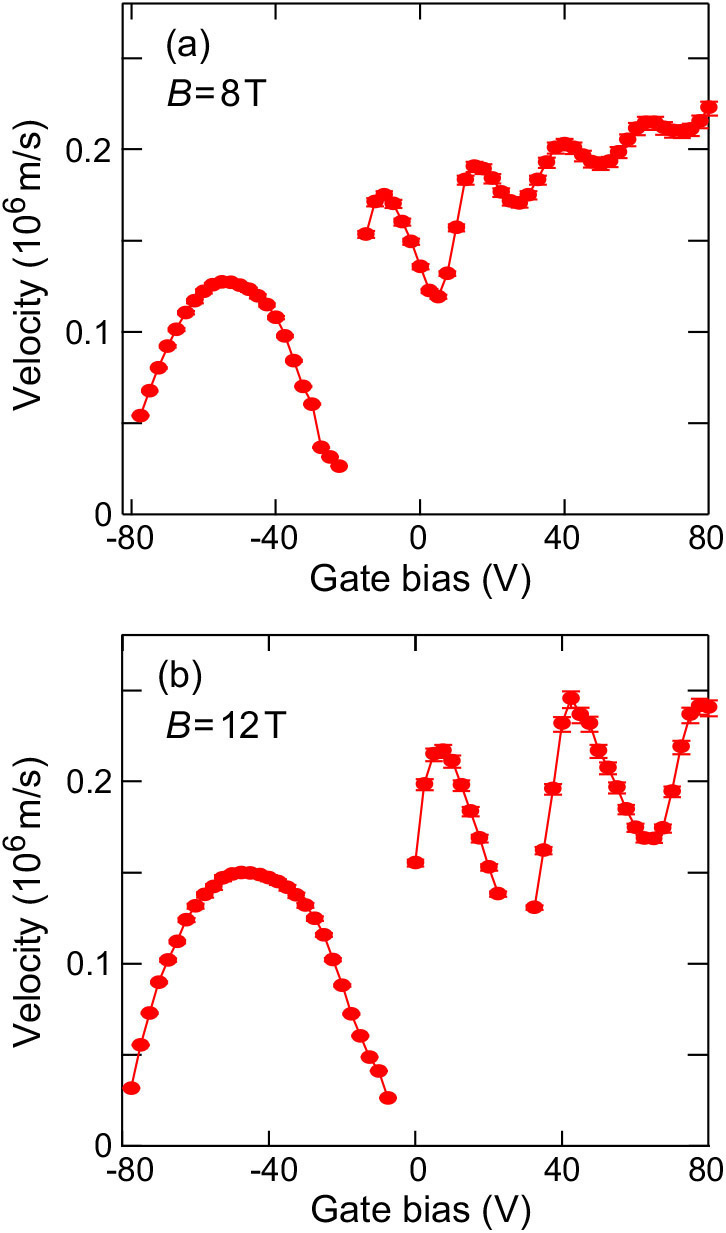 Figure 3. Results in the gated sample. In (a) and (b) plasmon velocity is shown as a function of the gate bias at B=8 and 12T, respectively, as a function of the gate bias Vg. The Dirac point is at Vg=− 85V, where plasmons were not observed. The electron density increases with Vgand becomes n=4.1×1016m− 2 at Vg=80V. As Vg is increased, the velocity increases from ∼104to ∼105m/s, with oscillations.

Figure 3(a) and (b) shows the plasmon velocity in the gated sample at a fixed magnetic field B=8 and 12T, respectively, as a function of the gate bias. The Dirac point (the voltage at which the energy bands of the negative and positive charge carriers meet) is at Vg=−85V, where plasmons were not observed. The electron density increases with Vg. As Vg is decreased, the velocity decreases from ∼105 to ∼104m/s, with oscillations. The period of the oscillation depends on the magnetic field. The peaks appear when the quantum Hall effect appears. The value of the velocity is one or two orders of magnitude smaller than in the ungated sample due to the screening of the electric field accompanying EMPs by the metal gate. The screening effect decreases with a narrower EMP region (w) and increases when the distance between the metal gate and the graphene is reduced. The gate dependence of the velocity can be ascribed to the carrier density dependence of w.

In summary, we carried out time-resolved electrical measurements of plasmons, particularly EMPs, in graphene. The plasmon velocity varies over two orders of magnitude between 104 and 106m/s, depending on the magnetic field, the electron density, and the gate screening effect. Since the tunability of the velocity indicates that the impedance and refractive index may also be tunable, it is possible that control of plasmon transport could be obtained using graphene. Furthermore, plasmons not being observed at the Dirac point suggests that the gated device serves as a plasmon switch. For our next step we intend to demonstrate tunable plasmon guiding (similar to fiber-optic guiding) based on the modulation of the velocity using sheet plasmons in graphene.