Advances in battery performance in the next 10 to 15 years will come from lithium ion (Li-ion) batteries.1 However, the current architecture used in Li-ion electrodes and cells appears to be reaching its physical limits and is inhibiting development of advanced designs, especially for emerging applications. New architectures are needed to design Li-ion cells with the improved performance desired in advanced battery products for those applications. Our novel 3D Li-ion cell architecture combines ultracapacitor power density and Li-ion energy density in a single device for both current and future high-power applications.2

We are developing a 3D solid-state battery architecture (see Figure 1) through the synthesis of novel battery materials and electrodeposition processing. This combination of power and energy may enable a new generation of energy storage products that could lead to new alternatives for designing consumer and industrial electronic products and military systems, as well as emerging applications such as electric-drive vehicles and utility-scale grid storage.

We fabricate our battery using high surface area copper foam as the negative electrode current collector. We deposit a novel anode material, copper antimonide (Cu2Sb), directly onto the foam with an efficient, inexpensive electroplating process. The anode is then conformally coated with a solid polymer electrolyte using electrochemical polymerization, which has demonstrated excellent reproducibility with pinhole-free coverage. Next, the remaining void spaces in the foam are filled with a nanostructured cathode using a slurry coating process that wets well to the polymer electrolyte, but does not dissolve it. To complete the cell, an aluminum foil current collector is applied to the slurry and the entire cell is dried (see Figure 2). 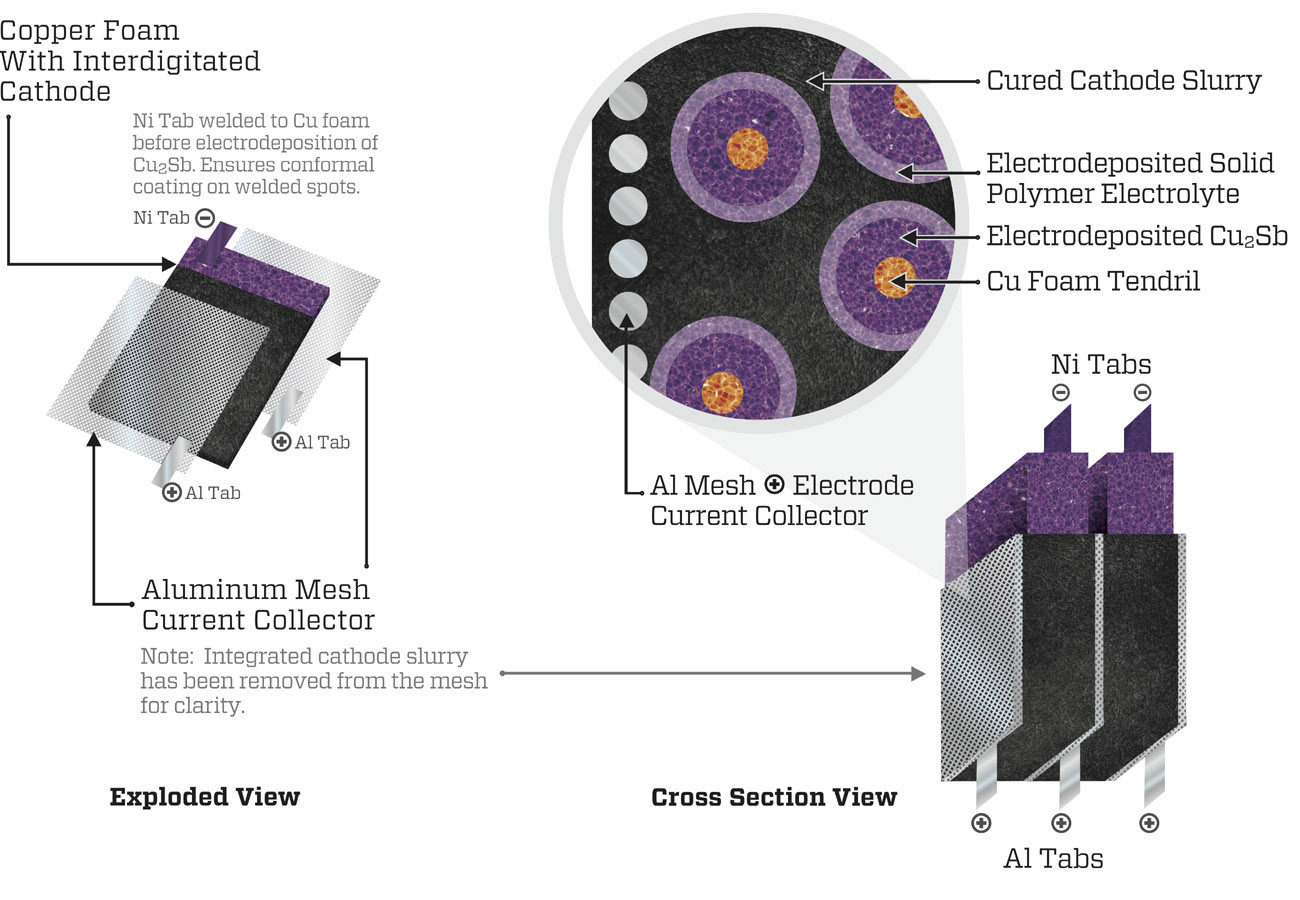 In our 3D cell architecture, a high surface area cathode and anode are interdigitated, which is like interlocking the fingers of two hands. Interdigitation allows multi-directional flow of Li ions compared to the one-directional movement in 2D Li-ion designs, and makes the path length for Li ions short at all points between the electrodes. The short diffusion length for Li ions and the high surface area between the anode and cathode are the physical reasons for the high power density of our architecture.

Our fabrication process is a hybrid of two mature manufacturing industries: traditional batteries and electrochemical plating.3 The steps are also water based and result in a process that is less expensive and more environmentally friendly than traditional Li-ion battery processing.

Over the next three years, we expect to develop cells with battery performances exceeding the current state-of-the-art liquid electrolyte Li-ion cells (see Figure 3) while incorporating the inherent safety of solid-state cells containing a non-flammable solid polymer electrolyte that acts as a buffer to mitigate potential shorts. The figure shows this projected performance compared to several other energy storage systems and that the battery outperforms ultracapacitors.

Going forward, we are working to step our technology from lab prototypes to commercialization by optimizing the solid polymer electrolyte and evaluating the anode for additional applications.

Derek Johnson is co-founding scientist and director of engineering and technology development. His focus is on integrating the three components of Prieto's solid-state, 3D battery architecture and optimizing the process steps associated with the anode, cathode, and solid-state electrolyte. He completed a postdoctoral fellowship in the research group of Amy Prieto at Colorado State University (CSU), where he worked to develop new synthetic methods for nanoscale inorganic materials. Prior to that he earned an MS and PhD in chemical engineering from CSU with a focus on aqueous plasma reactors for nanoparticle synthesis and water remediation. He has 17 peer-reviewed publications and patents as well as 36 presentations and associated abstracts, some of which have been invited and presented at internal conferences for professional societies such as the American Chemical Society, the American Institute of Chemical Engineers, the Materials Research Society, and the American Ceramic Society. The company is a spinout from CSU and was founded in 2009 by Prieto, a recent recipient of a Presidential Early Career Award for Scientists and Engineers.