Quantitative phase imaging (QPI) is emerging as a highly sensitive, real-time method for basic science and clinical applications. It can be used to measure nanometer-scale path length changes induced by a transparent specimen. These translates into ultrasensitive measurements of cell structure and dynamics.1 Recently, several QPI methods have been developed for various biomedical applications. However, the contrast in QPI images is often degraded by speckles that result from using highly coherent light sources such as lasers.2–4 To alleviate this problem, we recently developed QPI methods based on white light illumination. In this case, what is measured is the phase shift of the mean optical frequency, which reveals information on the structure and refractive index distribution within the specimen. We reviewed two methods, spatial light interference microscopy (SLIM),5 which is a phase-shifting, common-path method, as well as white-light diffraction phase microscopy (wDPM), which is off-axis and common path.6,7 Both methods have been developed for real-time imaging applications as add-ons at two different ports of the same existing inverted microscope, a Zeiss Axio Observer Z1 (see Figure 1).

Figure 1. Experimental setups for real-time quantitative phase imaging (QPI) methods. (A) White-light diffraction phase microscopy (wDPM): a diffraction grating located at a microscope's image plane is used to generate diffraction orders, each containing full spatial information about the sample. A mask is projected onto an amplitude spatial light modulator (SLM) placed at the Fourier plane. The zero-order beam (white light) is spatially low-pass filtered using a circular mask so that it becomes a uniform reference beam. The entire +1 diffraction order, containing a spread in colors, is passed through the filter (see inset Figure 1A) and used as the sample beam. All the other orders are blocked by the filter. A second lens, L2, is introduced to reconstruct the image at the camera plane. (B) Spatial light interference microscopy (SLIM): Besides the π/2 shift introduced in phase contrast microscopy between the scattered and unscattered light, an additional three phase shifts are generated. These shifts are performed in increments of π/2 using a reflective liquid crystal phase modulator. BS: Beam splitter. sCMOS: Scientific-grade complementary metal oxide semiconductor. LCPM: Liquid-crystal phase modulator. f1, f2: Focal lengths of lenses L1and L2, respectively.

The wDPM method uses spatially coherent white light illumination obtained by closing down the condenser aperture in a typical inverted microscope (see Figure 1A). The rendered image results from optical interference and provides nanometer-scale information about the specimen. This method combines the benefits of the high temporal sensitivity of the common path and off-axis technique and the high spatial sensitivity of white light illumination.

SLIM combines two classical ideas in optics and microscopy: Zernike's phase contrast method,8 by revealing the intrinsic contrast of the transparent samples, and Gabor's holography,9 by quantitatively retrieving the phase information (see Figure 1B). In addition, due to the short coherence length of the illumination, SLIM provides excellent optical sectioning, enabling 3D tomographic information.10,11 Four phase-shifted images are required to produce one quantitative phase image, and so the switching speed of the liquid crystal phase modulator (LCPM) and the acquisition rate of the camera limit the throughput and, thus, SLIM's applicability to highly dynamic samples.

We have developed a fast SLIM setup that can image at a maximum rate of 50 frames per second.12 This performance was achieved by combining a fast refresh rate LCPM and a fast scientific-grade complementary metal oxide semiconductor (sCMOS) camera. Further, using our own software, we performed the phase reconstruction and displayed the quantitative phase images in real time.

SLIM and wDPM are complementary. While SLIM provides slower acquisition due to the phase shifting, the images always provide higher resolution than wDPM due to the convergent (phase contrast) illumination. On the other hand, wDPM is single shot and thus can operate at acquisition rates limited only by the camera. However, wDPM requires fast Fourier transform processing for phase extraction, which is always noisier than the simple operations involving the four acquired frames in SLIM. We use wDPM for high-throughput blood screening and SLIM for imaging dynamics in eukaryotic cells (i.e., with a nucleus), such as cardiomyocytes (cardiac muscle cells).

Studying cardiomyocyte differentiation is important to heart diseases research and drug discovery screening. For functional cardiomyocytes, one indication of differentiation is the synchronization of beating of a cell or cell clusters. As the beating rate can be several hertz, the QPI method must be sufficiently fast for a quantitative study of the dynamics (see Figure 2). The interval between two spikes allows us to determine the beating rate. Performing further analysis of our SLIM data, we found that intracellular mass transport in beating cardiomyocytes follows the pattern of a deterministic phenomenon, as one might expect from a pulsating cell.12

Figure 2. (a–) Phase shifted images for a cardiomyocyte cell with phase shift (a) π/2; (b) 0; (c) π/2; and (d) π. (e) Quantitative phase image of the cardiomyocyte cell. The color bar shows the phase in radians. (f–g) Profiles of the phase along lines AB and CD defined in (e), respectively, at different times.

Hematologic disorders and various diseases of other organs can be detected by blood tests. Existing clinical technologies used to characterize blood samples, such as impedance counters and flow cytometers, are often accurate and offer high throughput. However, they are expensive and only provide limited information about red blood cells (RBCs), typically the mean corpuscular volume (MCV) and hemoglobin concentration (MCHC), and require further investigation by a trained physician when abnormalities are present. It is precisely this absence of technology and clinical expertise that prevents blood testing from becoming universally available.

To address this problem, researchers have made great progress toward decreasing the cost of the imaging instruments by taking advantage of commercial technology, such as cell phone cameras. Thus, novel light microscopy designs have resulted in miniaturized and inexpensive devices for cell imaging in low resource settings.13–17 However, the information provided by such instruments has been qualitative. The output data consist of images that require further analysis by trained staff.

Recently, we proposed a novel QPI approach for testing blood at a global scale. We demonstrated a real-time QPI blood testing system that can provide remote diagnosis with minimal human intervention in economically challenged areas.18 Our instrument combines novel advances in label-free optical imaging with parallel computing. The steps for phase image reconstruction and single cell analysis are illustrated in Figure 3:A–D. 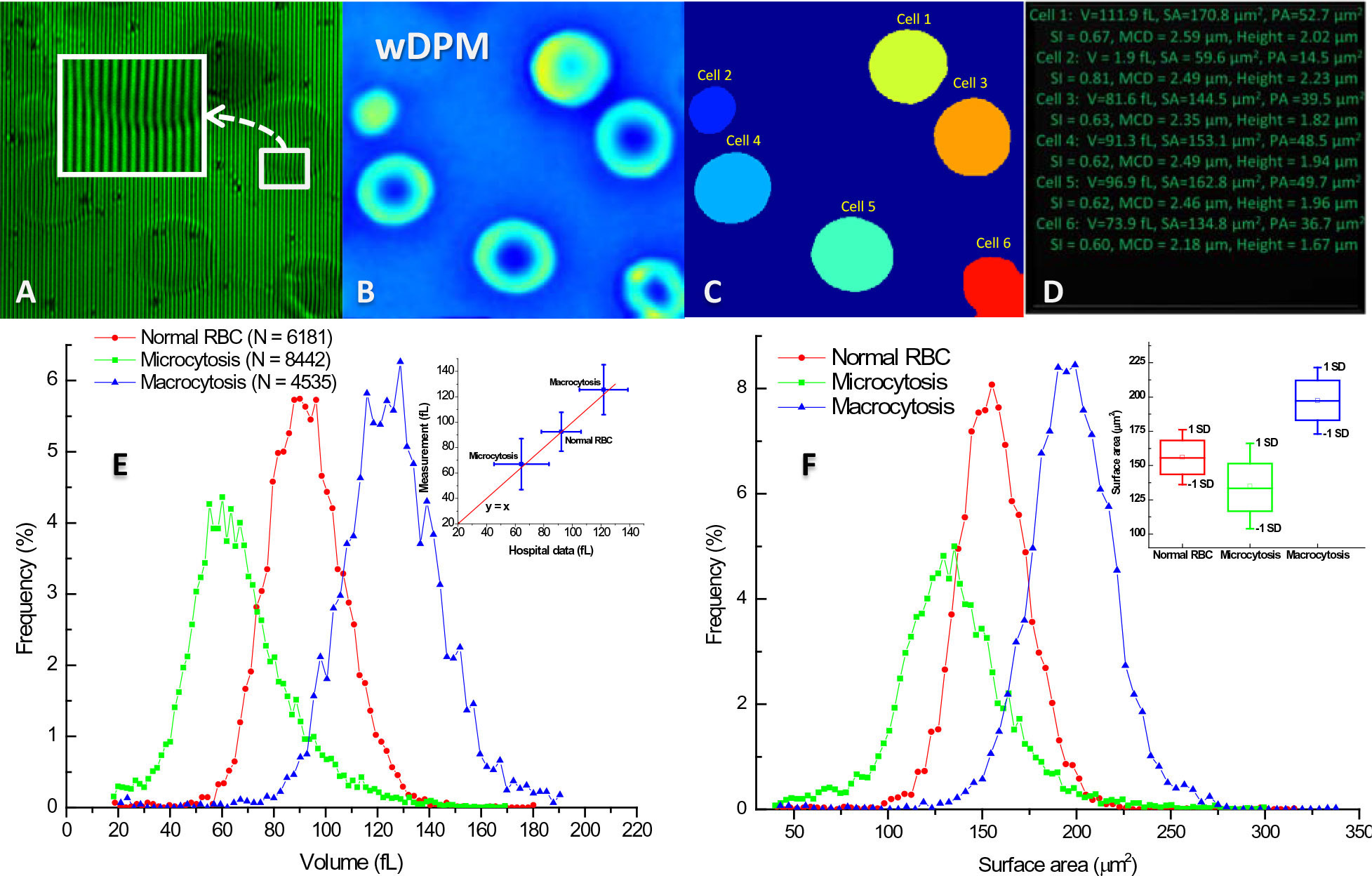 Figure 3. A–D: Steps of phase image reconstruction and cell analysis. The interferogram (A) is first reconstructed using Hilbert transform and then unwrapped to reconstruct the phase map (B). Each individual red blood cell (RBC) in the field of view is segmented and labeled (C) and the morphological parameters of each cell are calculated and displayed (D). E: Cell volume in femtoliters (fL). F: Cell surface area.

We used the system to measure several thousand cells from three different blood samples of a healthy patient and patients with microcytic and macrocytic anemia (unusually low and unusually high hemoglobin carriage, respectively, which can be caused by unusually low or high volumes of RBCs). Figure 3E shows the distributions of RBC volumes for three patients. The MCV values for normal, microcytic, and macrocytic patient are 92.5, 67.4, and 125.6fL (femtoliters), respectively. These numbers agree with the data acquired by the clinical impedance counter, which are 92.2, 64.4, and 121.8fL, respectively. The inset in Figure 3E illustrates the comparison between our measured data and the data from the clinical impedance counter.

Another important RBC index is the red blood distribution width (RDW), which is the width of the distribution curve of RBC volumes and equals the ratio between the standard deviation and MCV of the blood sample. RDW can be useful in early classification of anemias because it becomes abnormal earlier in nutritional deficiency anemias than any other red cell parameters, especially in the case of iron deficiency.19–21 An elevated RDW is known as anisocytosis. The measured RDWs for normal, microcytic and macrocytic patients are 16.5, 30.1, and 15.6%, respectively, which agree with the data from the clinical analyzers (15, 29.7, and 13.9%, respectively). In addition, the anisocytosis 3+ disease (high RDW) of the microcytic patient was confirmed with our measurement. Figure 3F shows one example of other parameters we measured, the cell surface area, which increases from microcytic, to normal, to macrocytic cells.

In summary, real-time QPI provides a powerful noninvasive approach for both basic science and clinical applications. The vast amount of information on the different diagnostic parameters, as well as the high throughput and real-time imaging, provide a viable solution for removing economically-driven discrepancies in blood testing and screening.

Going forward, we plan to expand our clinical studies to other diseases, such as sickle cell anemia, which present altered RBC numbers and morphology. We expect that QPI instruments that provide useful information in real time will enable biologists to explore completely new applications.

We thank Rashid Bashir and Vincent Chan for providing the cardiomyocytes and Krishna Tangella for providing clinical hematology expertise. This research was supported by the National Science Foundation grants CBET 08-46660 CAREER, CBET-1040462 MRI, and CBET-0939511 EBICS.

Basanta Bhaduri received his BTech and MTech in optics and optoelectronics from Calcutta University, India, in 2002 and 2004, respectively. After his PhD in physics in 2007 from IIT Madras, India, he was a postdoctoral research fellow at Monash University, Australia, and the National University of Singapore. He is currently a postdoctoral associate at UIUC.

Hoa Pham received a BS in electronics and telecommunications from Hanoi University of Technology, Vietnam, in 2002. He obtained an MS in electrical engineering in 2008 from UIUC. Before joining UIUC, he was a researcher at the Research Institute of Posts and Telecommunications in Hanoi. He is currently a PhD candidate.

David Wickland received his BS in electrical and computer engineering from UIUC in May 2012. His BS thesis was based on research at UIUC's Quantitative Light Imaging Laboratory. In the fall of 2012, he joined the Peace Corps as a teaching volunteer for an educational program in South Africa.

Gabriel Popescu received a BS and MS in physics from the University of Bucharest, Romania, in 1995 and 1996, respectively. He also holds an MS (1999) and PhD (2002) in optics from the College of Optics and Photonics at the University of Central Florida. He worked as a postdoc at the G. R. Harrison Spectroscopy Laboratory at the Massachusetts Institute of Technology before joining UIUC in August 2007.