Demand for high-speed signal processing continues to grow, and the speeds required are increasing even to terabit per second levels. However, electronic devices have an effective maximum cut-off frequency of 100GHz (switching speed), determined by the movement of electrons across semiconductor junctions, which makes it difficult to achieve Tbit/s data transmission. Optical signal processing offers higher frequencies and faster data transmission, but sufficiently rapid data processing is challenging. One way forward is to manipulate signal waveforms in the frequency domain.

Modulating the phase of a reference signal is one way to encode and transmit information, and it is efficient to transmit multiple signals simultaneously. These aims can be achieved by multi-level phase shift modulation keying and wavelength-division multiplexers, respectively.1 Unscrambling the received signals and extracting information requires us to reverse Fourier transform the waveform to extract both amplitude and phase information for multiple frequencies.

An optical frequency comb (OFC) measures individual quantities of particular frequencies of light in a mixture. The shape of the waveform is controlled by the relative phases of the optical longitudinal modes (i.e., frequencies favored by the transmission medium). We previously proposed a method for spectral control of an OFC, which can overcome the limitations of the switching speed.2, 3 More recently, we developed a digital-holographic technique called dual-heterodyne mixing,4, 5 which can measure the relative phases in the OFC.

Figure 1. (a) Amplitude and (b) phase spectra measured by the proposed system.

In the second part of our work, we showed that with dual-heterodyne mixing we can control and analyze the amplitude and phase of each tooth in an OFC with an ultrafast (THz frequency range) OFC synthesizer (UOFCS) and also analyze the amplitude and relative phase of each tooth of the signal OFC with an ultra-fast optical frequency analyzer (UOFCA). 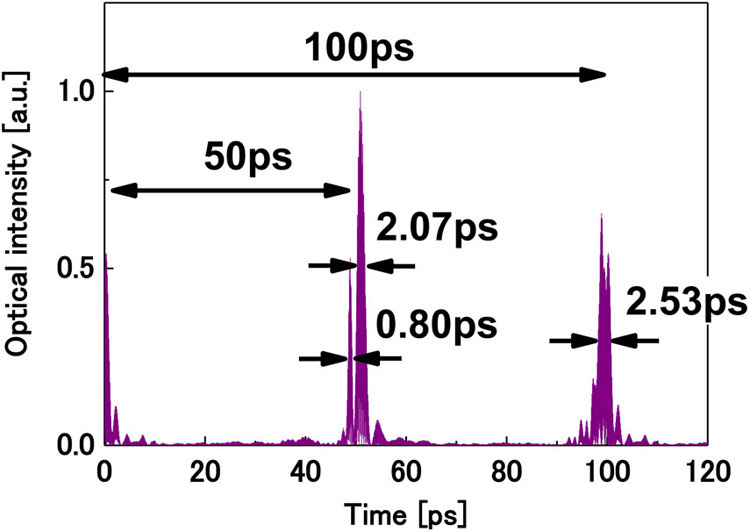 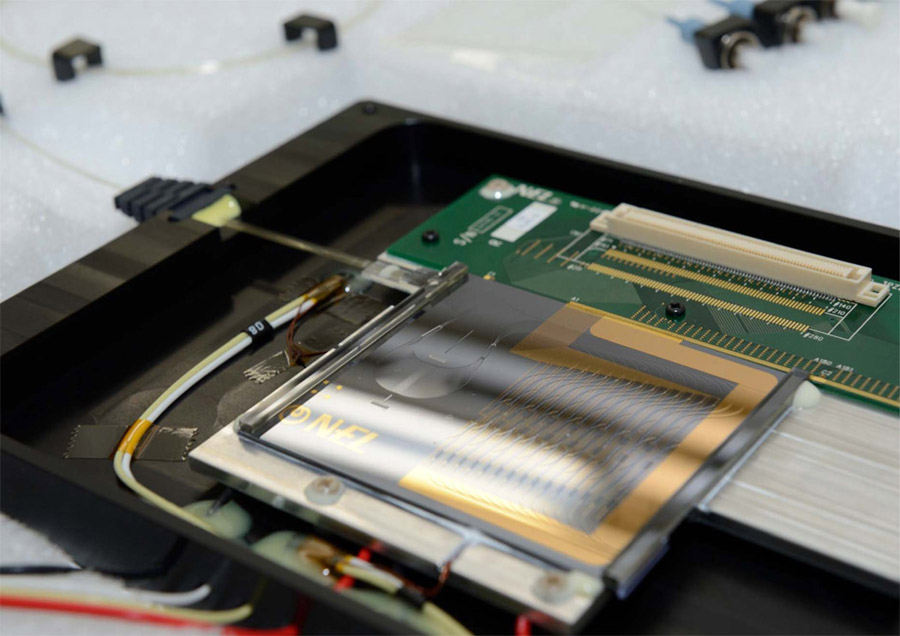 The UOFCS incorporates an arrayed waveguide grating (AWG) and multi-channel amplitude and phase modulators. The time resolution of the waveform output from the synthesizer is inversely proportional to its frequency band. However, the number of channels the AWG can process in parallel is limited. We therefore integrated a custom sinusoidal AWG to act as a filter and extract a 400GHz OFC signal (OFC_s) from a 25GHz comb. The 400GHz OFC_s was incident on the UOFCS, which manipulated the amplitude and phase of each longitudinal mode: see Figure 4. 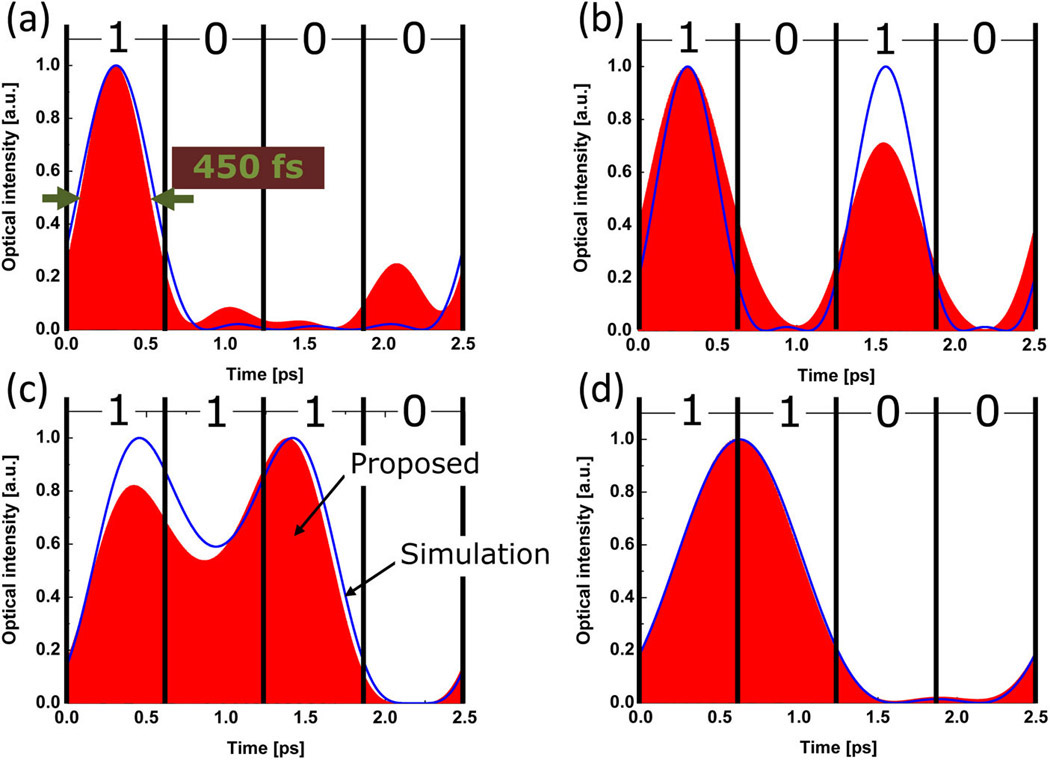 Figure 5. 2Tbit/s (4bit) packets obtained from the measured phase and amplitude spectra. The measured packet patterns (a) 1000, (b) 1010, (c) 1110, and (d) 1100 are shown as waveforms filled in red, with numerically obtained waveforms shown as solid blue lines. 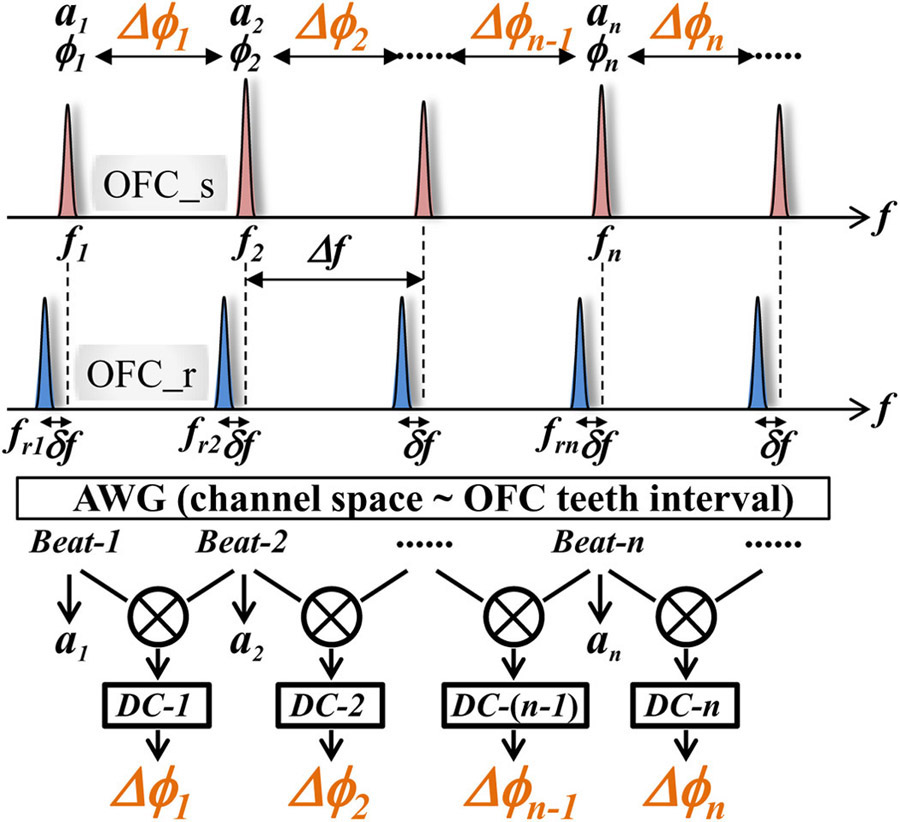 We used the UOFCS to send 4bit packets—that is, packets of four 0.5ps pulses that are either on (1) or off (0), representing binary signals 1000, 1010, 1110, and 1100—and tested whether we could use dual heterodyne mixing to receive them correctly with the UOFCA. The signals were successfully obtained: see Figure 5. The time window and resolution of the synthesized waveform are determined by the OFC peak interval and OFC frequency band, respectively. As a result, all signals at 400GHz OFC were modulated by control signals at least as long as the time inverse of 400GHz (i.e., 2.5ps). Rather than require a ∼450fs switching period (the inverse of OFC frequency band 2THz), we could process data pulses of that duration with much longer control signals. In addition, the bit number is determined by the number of peaks in the OFC. In other words, an OFC with four frequencies is required for a 4bit signal, and we have already succeeded in generating 32bit signals from 32 frequencies in the lab.

The UOFCA compares the signal OFC with a reference OFC (OFC_r) that has a slightly offset central frequency but the same (frequency) gap Δf between the component frequencies (i.e., the teeth of the comb). A parallel detection system measures the signal spectral waveform—the amplitudes—and detects the beats between the neighboring frequencies of the two combs. It then analyzes the beats to obtain the phases of the signal components relative to the OFC_r, which has known phases (see Figure 6).

In summary, our proposed system can divide signal information by frequency rather than time. Using our UFOCS and UFOCA, we have successfully synthesized, sent, received, and analyzed 2Tbit/s optical waveforms, which is a substantial increase in speed over the effective electronic signal processing of 100GHz. We are now working to apply our method not only to optical communication technology but also to other systems requiring rapid spectral analysis.

Tatsutoshi Shioda is an associate professor.