The diagnosis, treatment, and prognosis of eye diseases have greatly benefited from innovation in modern ophthalmic imaging technologies. Photoacoustic ophthalmoscopy (PAOM) is a 3D imaging method that allows non-invasive visualization of the back of the eye through angiography (where an x-ray-based technique is used to create an image). But unlike an angiogram, the image is made using no exogenous contrast agents.1–3PAOM instead uses the endogenous light-absorption contrast from hemoglobin and melanin to generate images of the retina's vascular network and its pigment epithelium (the cell layer just outside the retina), respectively. When energy from a pulsed laser illumination is absorbed, some of it is transformed into heat. The transient heating leads to a rapid local expansion and collapse in volume that produces mechanical waves, or ultrasound. We detect this photoacoustic effect using an external transducer, and we can use the ultrasonic waves to construct an image. Using PAOM to visualize hemaglobin and melanin, which are strongly associated with conditions of the retina, could assist in the early diagnosis of several blinding diseases and dysfunctions in microcirculation and the retinal pigment epithelium (RPE).

To achieve comprehensive retinal imaging and to verify PAOM with other established ophthalmic imaging techniques, we integrated the PAOM system with spectral-domain optical coherence tomography (SD-OCT) and scanning laser ophthalmoscopy (SLO).3 We used a dichroic mirror to combine the PAOM light source and continuous waveform 488-nm argon-ion laser to achieve SLO (see Figure 1a). We added a near-IR superluminescence diode to the light path with a hot mirror in front of a two-dimensional galvanometer scanning mirror. We then reduced the collimated beam diameter to 0.4mm at the eye pupil. The incident light source of PAOM was an Nd:YAG laser (or a tunable laser system). We detected the photoacoustic wave from the posterior eye using a needle ultrasound transducer touching the eyelid. We then synchronized the transducer, SLO photodiode (an avalanche photodiode), and OCT spectrometer to obtain the three modal images simultaneously. For in vivo retinal imaging, we anesthetized and immobilized an animal on a customized holder (see Figure 1b). We then locally anesthetized the eyeball with 0.5% tetracaine hydrochloride ophthalmic solution and dilated the pupil with 1% tropicamide ophthalmic solution.

Figure 2 shows PAOM angiography of the retina and choroidal (vascular) layer in an albino rat eye.2 We projected the 3D intensities from OCT and PAOM onto the transverse plane to form images of the eye's interior (see Figure 2). In both images, we could clearly identify the radiated retinal blood vessels from the optic disk. PAOM also showed the rich blood vascular bed in the choroidal layer, which was less visible in the OCT image. The results confirmed PAOM's excellent contrast from the blood vessels, due to its unique absorption contrast mechanism. In OCT, the scattering tissue structures clouded the blood vessel structures beneath the retinal nerve fiber layer. 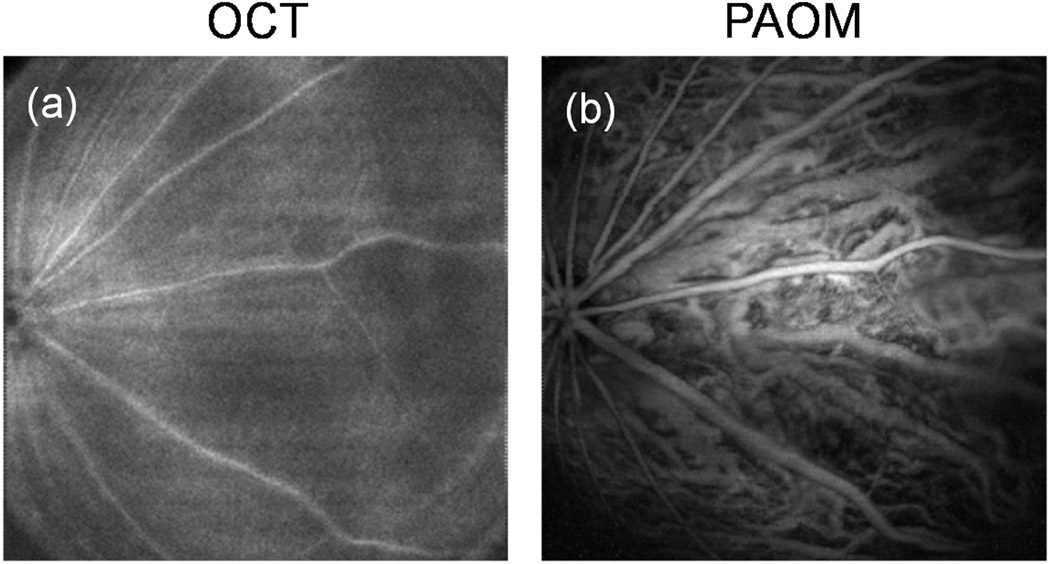 Figure 2. Simultaneous (a) OCT and (b) PAOM images of the interior of an albino rat eye.

Besides the angiography, PAOM can also image melanin distribution in the RPE (see Figure 3).3 We acquired images from a pigmented rat eye, where the RPE melanin concentration is high. The melanin created a bright background in the PAOM image, since the illuminating visible light could hardly penetrate it (see Figure 3a). In the SLO images, we administered fluorescein dye through a tail vein to create a strong fluorescence contrast in the retinal blood vessels (see Figure 3b). The background in the SLO image was mostly dark, since the melanin had absorbed both the excitation and fluorescence light. In the OCT image, less light was scattered back because of the blood absorption, creating dark contrast from the retinal blood vessels (see Figure 3c). PAOM's capability in imaging the melanin distribution is demonstrated as a comparison between PAOM and SLO images within the dashed-boxes (as highlighted by the arrows). A streak in Figure 3a suggested low melanin concentration in the RPE. In the SLO mode, the excitation could leak though those areas and excite the fluorescein in the choroidal vessels. Thus, we could see a bright streak of fluorescence signal from the choroid at the same location.

Figure 3. Multimodal images acquired from a pigmented rat eye. (a) PAOM image shows the retinal vessels and the bright background of melanin in the retinal pigment epithelium (RPE). (b) Fluorescence angiography SLO images. (c) OCT eye interior images. The squared dashed boxes in (a) and (b) highlight a region with low melanin concentration in the RPE (white arrow).

PAOM's unique high contrast for imaging retinal and choroidal blood vessels, and for RPE melanin distribution, suggests significant applications in understanding and diagnosing eye diseases. With multiple PAOM excitation wavelengths, we can quantify the local oxygen saturation level, which can further provide the local metabolic rate of oxygen if combined with Doppler OCT. Determining these levels could assist in early detection of diabetic retinopathy, which is believed to follow an early metabolic disorder in the retina. Future work may focus on developing low-cost and disposable ultrasonic detectors with high sensitivity to enable PAOM's application in a clinical setting.

Hao F. Zhang is interested in novel optical imaging and sensing technologies with applications in both fundamental investigations and clinical diagnoses.