Versatile lasers are indispensable for applications in a variety of fields including military, telecommunications, manufacturing, and medicine. High-power laser systems provide an incredibly strong source of energy and are often used in industrial applications for cutting and drilling. Unintended laser irradiations can therefore cause injury to eyes and other body parts. People working with such laser systems are at risk due to the high health risk they pose. Lasers are incorporated into many types of weaponry for military applications and can blind military personnel or cause damage to sensors. In a recent example of the threat posed to humans, a laser pointer was aimed at an airplane, temporarily blinding the pilot.1 There is a considerable need for a device capable of protecting people from laser threats such as these.

The laser protection devices currently in use are non-adaptive. They have a transmission that is constant, regardless of incident laser power, and primarily reduce the transmission using materials with linear absorption. Complete elimination of certain (visible) wavelengths in the absence of harmful laser radiation can create serious problems in applications that require high visibility. Optical limiting devices that cause transmission to decrease as the incident power increases have been proposed as a potential solution to these problems. Nonlinear optical materials provide a possible route toward realizing such adaptive devices.

Figure 1. Illustration depicting the dependency of optical properties on the size of gold (Au) nanoparticles. The nonlinear absorption of a small gold atomic cluster shows no absorption saturation at surface plasmon resonance wavelength.

We have developed new, metal-based optical limiting materials by obtaining precise control over atom quantities. To gain this control, we produced thiolate-capped gold nanoparticles using a modified Brust method. Size-selection was made possible by adjusting the experimental conditions (material ratio, reaction temperature, and kinetic control). We achieved a relatively narrow size distribution of <2nm. An advantage of these atomically engineered nanoclusters is that their decomposition temperature is high. By precisely controlling the number of gold atoms in a cluster, its nonlinear optical properties—particularly the optical limiting—can be tuned (see Figure 1). We developed the following atomically precise gold clusters: Au25 (SR)18, Au38 (SR)24, and Au144(SR)60 (S: sulfur; R: CH2CH2Ph). The numbers 25, 38 and 144 represent the number of gold atoms in the cluster. We used a Z-scan technique2 to study the nonlinear optical properties of these ultra-small clusters of gold. 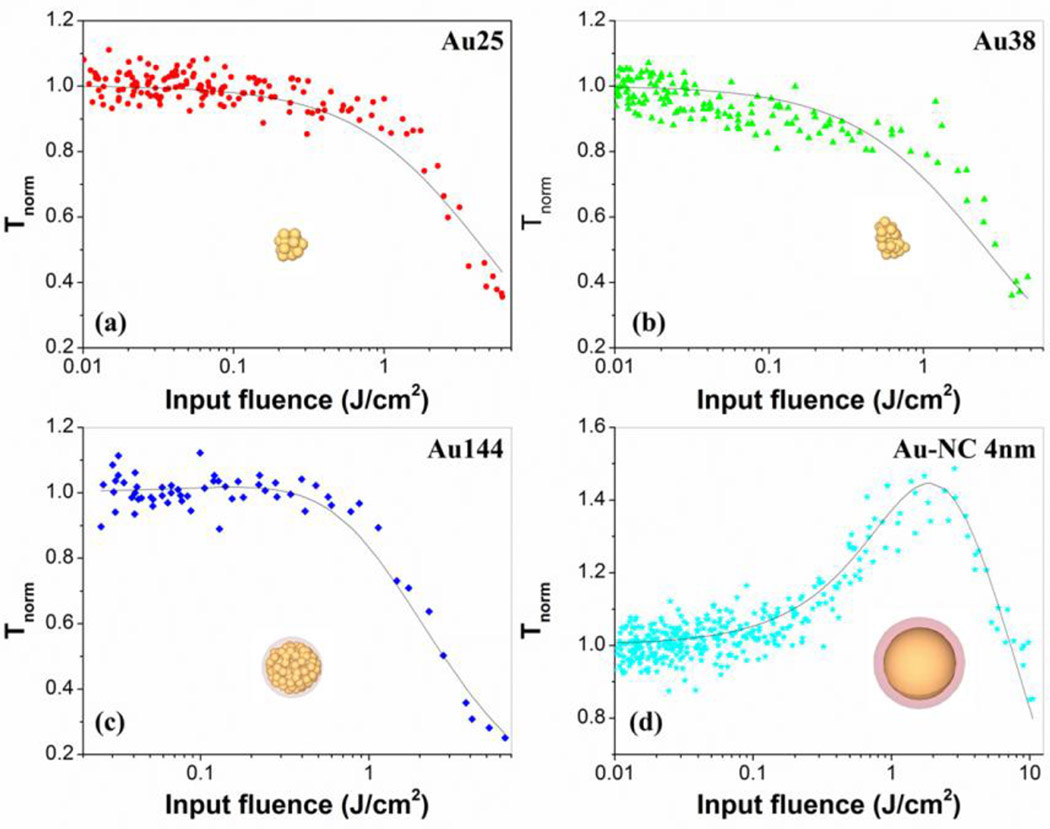 Our results revealed remarkable features of the distinct evolution of optical nonlinearity as the clusters progress in size from the nonplasmonic regime to the plasmonic one (see Figure 2).3 We ascertained that as wavelength increases, the smallest atomic clusters do not show an increase in transmission at the surface plasmon wavelength of larger gold nanocrystals (>2nm).3 The smallest atomic cluster (Au25) exhibits the best optical limiting behavior, and the transmission continuously decreases as the incident laser intensity is increased (see Figure 2). On the other hand, the regular gold nanocrystal (Au-NC) shows undesirable behavior for optical limiting, since the transmission initially increases alongside laser intensity. This could potentially damage the subject under protection.

Gold particles with size on the order of a conduction electron's de-Broglie wavelength (about 0.5nm) have discrete energy levels and molecule-like transitions between the highest occupied and lowest unoccupied molecular orbitals, while larger gold nanoparticles (>5nm) exhibit quasi-continuous electronic bands. As such, atomic-size gold clusters have better limiting performance. Gold clusters smaller than 2nm lose their bulk-like electronic properties and no longer support collective plasmon excitation near their Fermi surfaces. This surface plasmon resonance (SPR) plays a major role in the nonlinear absorption characteristics of nanometallic materials. In the case of the nanocrystals in which SPR can occur, their nonlinear absorption behaviors at SPR wavelengths are the result of two opposing effects. First, the depletion of electrons near the Fermi surface by SPR tends to saturate the absorption and thus increase the transmission (absorption saturation). Second, absorption by free carriers in the conduction band promotes further absorption and reduces transmission as the laser intensity increases. However, in the case of our smallest nanocluster, Au25 (SR)18, only free carrier absorption occurs. As a result, there is only reduction in transmission as the laser intensity increases. This is beneficial in optical limiting applications where an increase in transmission is undesirable.

In summary, we found that non-plasmonic ultra-small quantum clusters are superior candidates for optical power limiting at the SPR wavelengths due to the absence of absorption saturation effects. This finding has the potential to shift the focus of future nonlinear optical investigations away from the currently investigated larger nanocrystals and toward ultra-small quantum clusters. Our next step is to study the optical limiting of nanoclusters over a broad wavelength range.

Panit Chantharasupawong is currently a graduate student under the supervision of Professor Jayan Thomas. He received his Bachelor degree in nanoengineering from Chulalongkorn University in 2009.

Rongchao Jin is an associate professor. He received his PhD in chemistry from Northwestern University in 2003. His current research interests focus on atomically precise metal nanoclusters.

Jayan Thomas is an assistant professor of nanotechnology, optics and photonics, and material science. His current research focuses on the development of nanoparticles and nanostructures for optical and energy storage applications.