Atmospheric aerosol measurement with a network of advanced lidar instruments

The European Aerosol Research Lidar Network (EARLINET) was established as a European Commission (EC) Framework Programme for Research and Technological Development project.1–3 The network began operations in May 2000 and now has 30 lidar stations distributed all over Europe. The information collected has been used to build up the largest database of spatial and temporal aerosol distributions within the atmosphere, on a continental scale. Data provided by EARLINET is available to the scientific community and is of particular interest in studies of climate, weather, and air quality.4 The EARLINET instruments are advanced aerosol lidars (light detection and ranging), or laser radars, which use the radiation backscattered by aerosols and molecules that are swept over by a laser light pulse to retrieve range-resolved aerosol optical extinction and backscatter coefficients.

To obtain both coefficients independently, many of the EARLINET lidar systems measure radiation that is backscattered by atmospheric nitrogen at a wavelength that is shifted by the so-called Raman effect from the near-UV or visible wavelengths of the illuminating laser pulses.5–8 The wavelength shift of lines in the Raman spectrum with respect to the excitation radiation is molecule-specific, and the intensity of this radiation depends on the concentration of that species. The concentration of nitrogen in the atmosphere, as a function of height, is accurately known and can be used to determine a theoretical height profile signal, for an atmosphere devoid of aerosols, for the lidar Raman channel. The deviation of the measured Raman-shifted signal from this reference of a purely molecular atmosphere is related to the extinction caused by the presence of aerosols. The spectral lines traditionally used in this technique are a group in the vibro-rotational Raman spectrum of nitrogen shifted approximately 2330cm−1 toward longer wavelengths, with respect to the excitation wavelength. Improved instruments are being developed to use lines in the rotational spectrum instead. These lines provide a larger cross-section, but are closer to the excitation wavelength and therefore require improved optics to filter the elastically backscattered radiation in the receiver Raman channels.

We have designed an advanced multi-wavelength system that uses a Nd:YAG (neodymium-doped yttrium aluminum garnet) laser, fitted with second and third harmonic generators, and a receiver that has channels for the elastic backscatter at the transmitted laser wavelengths: 1064nm (fundamental wavelength), 532nm (second harmonic), and 355nm (third harmonic), which fall in the near-IR, visible, and near-UV parts of the spectrum, respectively. The system also has Raman-shifted channels for nitrogen at 607 and 387nm, and for water vapor at 407nm. An optical system with beamsplitters, mirrors, narrow pass-band interference filters, and notch filters is used to divert signal at the different wavelengths to the corresponding photodetectors, to filter out the background radiation noise, and to reject inter-channel interference. To optimize the receiver channel sensitivities, photomultiplier tubes are used for the UV and visible channels, and avalanche photodiodes are used for the IR channels. This design is now operating as part of EARLINET.

Systems that combine the outputs of the elastic channels and of the nitrogen (or oxygen) Raman channels at close wavelengths permit the classification of aerosols according to the lidar ratio (the ratio of the extinction and backscatter coefficients) because the two parameters are measured directly without a priori considerations. With multi-wavelength systems such as ours, the behavior of the coefficients at different wavelengths provides information concerning the microphysical properties (e.g., effective radius, radius distribution, volume concentration, and refractive index) of aerosols.9–15 Some of our EARLINET lidar instruments are also fitted with depolarization channels. These are used to measure the range-resolved depolarization of the radiation that is backscattered by the aerosols, and allow additional characterization of the aerosol particle microphysical properties.8, 16–18 Figure 1 shows extinction and backscatter coefficient profiles, at a wavelength of 532nm, obtained by the EARLINET Barcelona station. 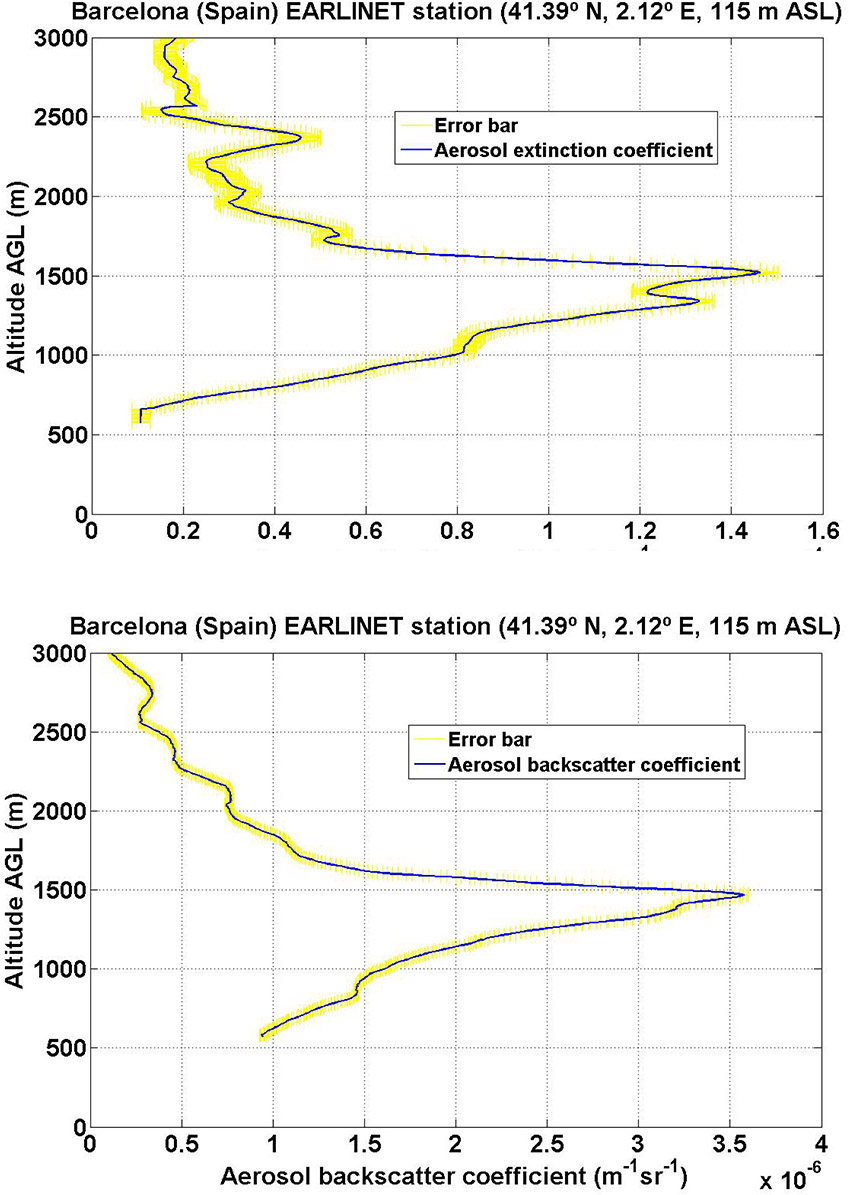 Figure 1. Aerosol extinction and backscatter coefficients (at a wavelength of 532nm) measured at the Barcelona European Aerosol Research Lidar Network (EARLINET) station, using the signal backscattered elastically at 532nm and the Raman-shifted signal at 607nm. AGL: Above ground level. ASL: Above sea level.

In April 2011, EARLINET was integrated with other atmospheric observation components in the Aerosol, Clouds, and Trace gases Research Infrastructure Network (ACTRIS).19 This network implements a Europe-wide comprehensive atmospheric research infrastructure. In addition to the ground-based remote measurements of vertical aerosol distributions made via EARLINET, ACTRIS provides the capabilities for measuring aerosol optical and microphysical properties with in situ techniques (through the EC's European Supersites for Atmospheric Aerosol Research project), vertical profiles of cloud parameters with radar and lidar techniques (through the EC's Cloudnet project), and short-lived trace gases (via an existing infrastructure).20, 21 Figure 2 shows the geographical distribution of the still growing ACTRIS infrastructure and its different components. The key aspect of the ACTRIS project is its aim to effectively merge these different components into a single infrastructure that provides integrated atmospheric data products available at the ACTRIS data portal.19 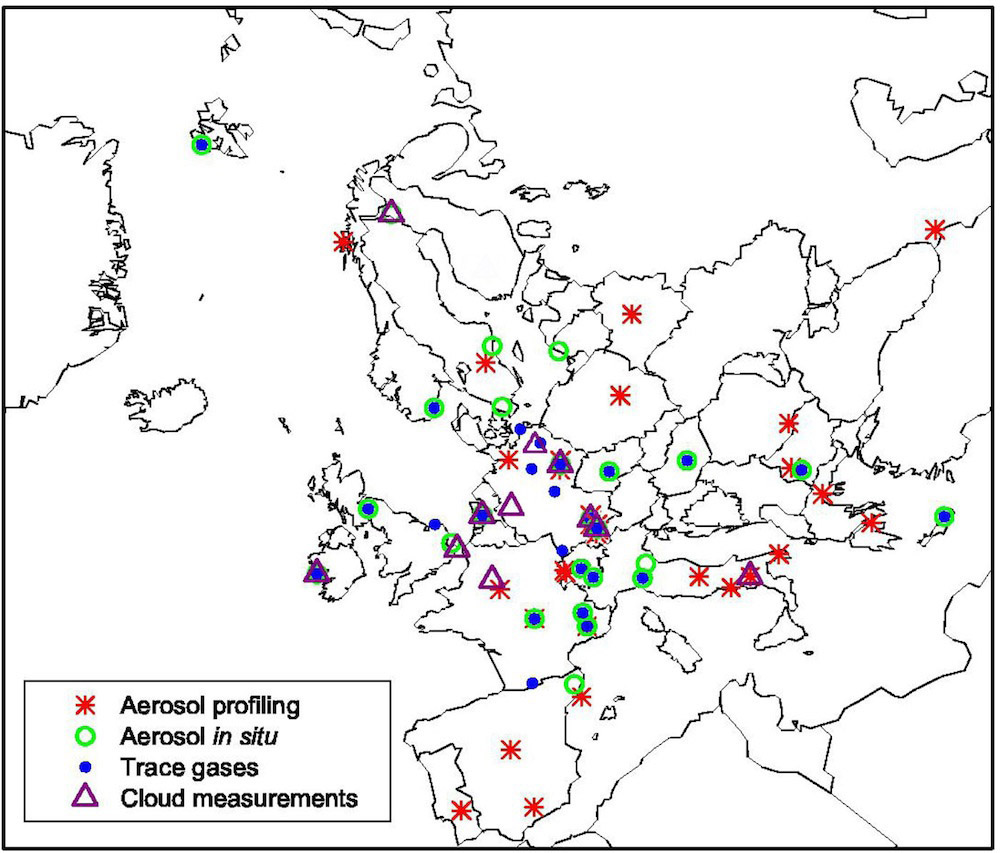 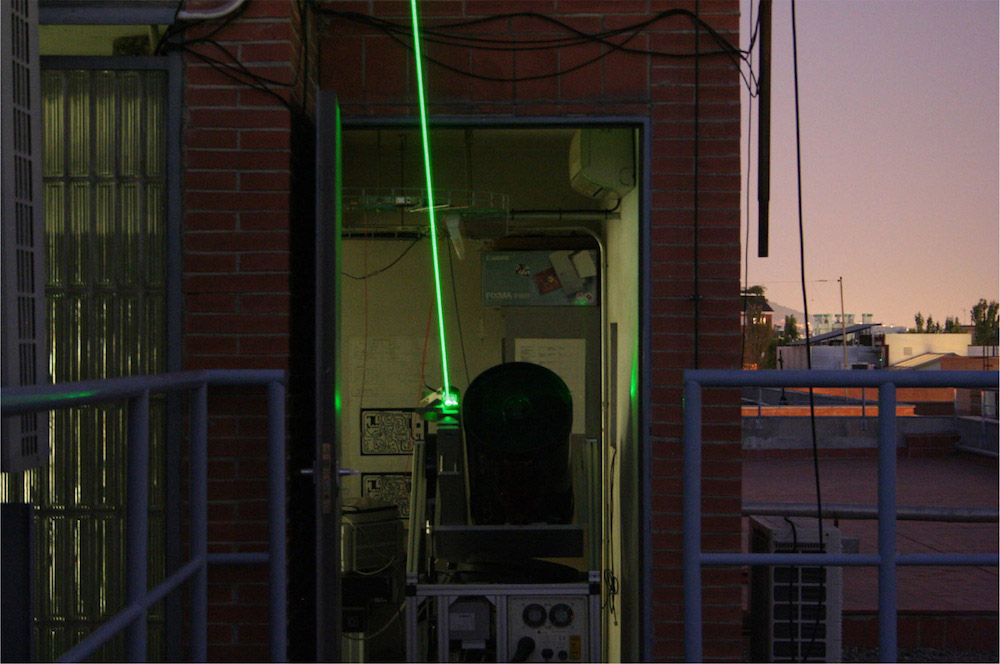 Figure 3. The Barcelona lidar station of EARLINET at the Universitat Politecnica de Catalunya, BarcelonaTech, in operation. The green beam is the second harmonic (532nm) of the neodymium-doped yttrium aluminum garnet laser. The two other laser beams at the fundamental (1064nm) and the third harmonic (355nm) wavelengths are in the near-IR and UV, respectively, and are thus invisible to the human eye.

Optics and photonics technologies are most conspicuously used in the lidar remote sensing part of the ACTRIS network (e.g., Figure 3 shows the Barcelona EARLINET lidar station in operation). However, these technologies also play an important, albeit more hidden, role in other components of the infrastructure. For example, in situ instruments such as nephelometers (which measure suspended particles in a sample of air), absorption photometers, and aethalometers (which measure, in real time, the mass concentration of black carbon in an air stream) rely on optoelectronic systems to determine optical or chemical properties of the aerosol contained in the air sample. Some in situ trace gas measurement instruments, as well as passive remote sensing instruments that employ Fourier transform IR spectroscopy and multi-axis differential optical absorption spectroscopy, also use light-based techniques.

ACTRIS provides a state-of-the-art, geographically distributed infrastructure for atmospheric observations and a framework for trans-national access to its installations for unaffiliated scientists. ACTRIS also enables training of young researchers, to conduct collaborative research activities, and to develop technologies for new and improved observation methods. The ACTRIS infrastructure also facilitates access to sun photometer calibration services through the AERONET (Aerosol Robotic Network)-EUROPE program.22, 23 We are currently working to improve our lidar instrument designs to extend the temporal coverage of EARLINET and to improve daytime capabilities. This work will better characterize and assess the impact of aerosols on weather and climate, as well as their effect on the global radiation balance.

Adolfo Comerón is a professor in the Department of Signal Theory and Communications. He participates in the EC's ACTRIS project, for which he leads the remote sensing of the vertical aerosol distribution work package.