Adaptive optics (AO) is now a mature technology that aims to obtain better images by correcting optical aberrations. Perhaps the best-known AO application is in astronomical telescopes, where it reduces image degradation caused by atmospheric turbulence. Optical problems in the human eye are similar to those in the astronomical case, albeit with different spatial and temporal scales. The eye is affected by aberrations, which may blur images, and by intraocular scattering, which affects contrast. For nearly 20 years, laboratories around the world, including our own,1 have sought to develop adaptive optics instruments for use in ophthalmology.

The human eye is a simple, but extremely robust optical instrument.2It is composed of two positive lenses, the cornea and the crystalline lens, which produce real images of the world on the retina, initiating the visual process. The optical surfaces of the eye's lenses are not exactly spherical in shape and are not perfectly aligned, producing ocular aberrations and blurring images on the retina. The impact of such aberrations in a normal eye with an aperture of f/4 is approximately equivalent to that of 0.25 diopters of pure defocus. This is a small error typically not corrected, although it can be significant when imaging the retina. In the normal young eye, the optical properties of the two ocular components are tuned to produce an improved overall image quality. Two of the most important aberrations are coma and spherical, which are partially corrected. The eye acts like an aplanatic optical system, where selection of a specific lens configuration allows the formation of images with minimal spherical aberration and off-axis coma.3

Figure 1. Schematic diagram of adaptive optics (AO) technology for correcting the eye (A) and the concept of the AO vision analyzer (B), with typical wavefront aberration maps (bottom row) for each.

If the eye's aberrations are identifiable, we can rectify them using a device that compensates by correcting light wavefronts. This technique aims to produces aberration-free (diffraction-limited) retinal images: see Figure 1(A). AO for the eye uses deformable mirrors or liquid-crystal spatial light modulators as corrector devices.4, 5 In the early days of AO, applications for the eye sought to improve the resolution of photographs of the eye's interior that had been recorded through an ophthalmoscope's corrected eye optics. However, we soon realized we could use this technology not only to correct existing ocular aberrations, but also to add aberration patterns to the eye in a controlled manner for testing purposes: see Figure 1(B). 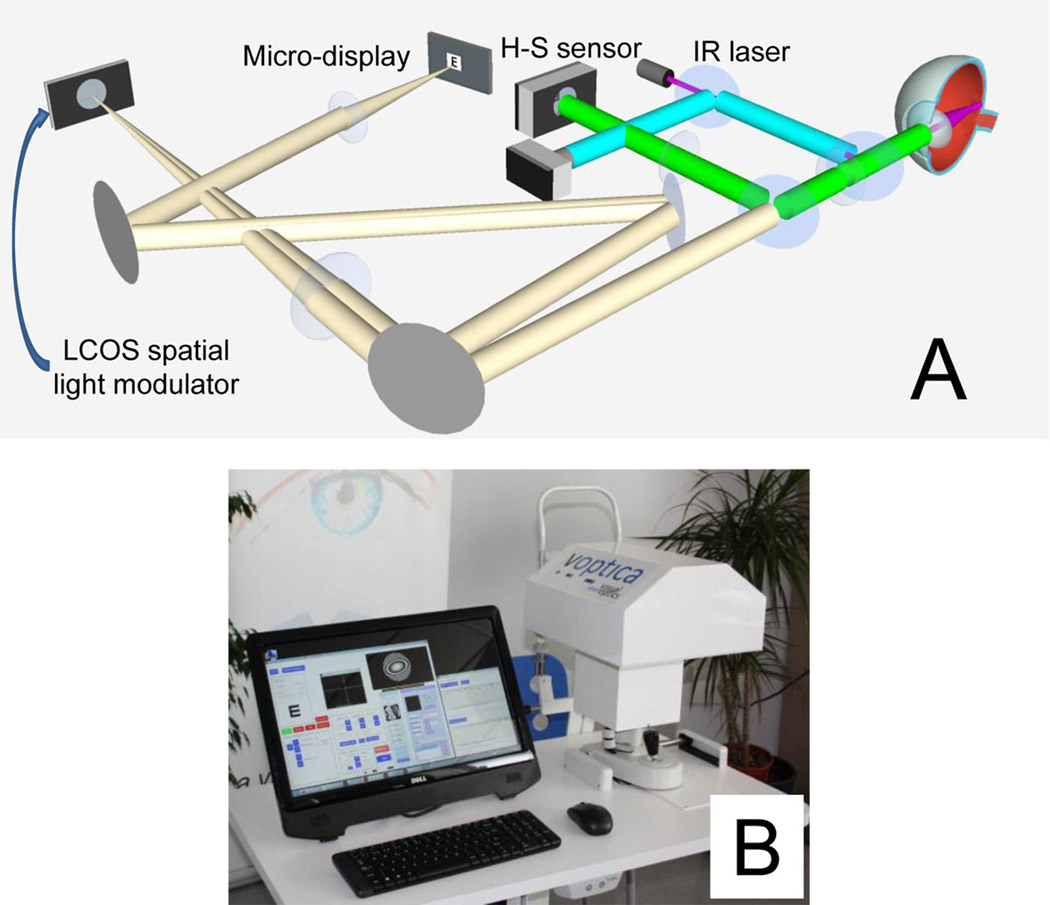 Using an additional optical path, we projected visual stimuli onto the eye to perform testing for various optical conditions. This is the basis of the AO vision analyzer (see Figure 2). The instrument consists of a wavefront sensor to measure the eye's aberrations and a correcting device to modify the optics—we selected a liquid-crystal-on-silicon (LCOS) spatial light modulator. A Hartmann-Shack wavefront sensor,6 operating in IR light, measures the eye's aberrations and residual defocus in real time (25Hz). In the second pass, after the light is reflected in the retina and passes through the complete system, an array of lenslets, optically conjugated with the subject's pupil plane, produces an image of spots on a camera. The locations of the spots provide the local slopes of the ocular wavefront aberration. The correcting/manipulating device is placed in the system, conjugated both with the subject's pupil plane and the wavefront sensor, by using appropriate sets of lenses in a telescope configuration. Subjects view a stimulus (letters or any visual scene) produced either by a handheld projector or an organic LED micro-display.

There are numerous potential applications for this AO instrument in ophthalmology. Perhaps the most obvious is the progressive substitution of phoropters. These are the long-standing systems found in any ophthalmic clinic that include wheels with different lenses to aid visual testing. With AO, opto-electronics devices would replace standard lenses and could induce not only defocus and astigmatism, but all optical aberrations. This would allow us to tailor the optical correction for different visual tasks and conditions, possibly leading to customized eye treatments. For example, in some cases, residual customized spherical aberration can provide extra depth of focus in presbyopic eyes (where the patient has difficulty focusing on near objects). Another application could be the pre-testing of different optical solutions. We could, for instance, induce a patient's optical profile prior to invasive procedures such as a definitive ablation of the cornea, performed during laser refractive surgery. Furthermore, our instrument can be used in a variety of experiments on vision research. We recently clarified the cause of night myopia,7 the shift in nearsightedness occurring at low luminance levels that is mainly due to an error in the eye's accommodation.

There remain, however, some challenges before our technology can move from laboratory to clinic. Although we have already proposed AO systems for binocular vision,8 these are still limited to the laboratory. In addition, open view systems combining AO and eye-tracker technology should be developed for more practical clinical uses. A reduction in the cost of key correcting elements would also help advance the technology. But in the near future, better and less expensive LCOS spatial modulators and OLED micro-displays will be incorporated in newer versions of the AO visual analyzer.

Pablo Artal is a professor of optics, with interest in the visual and biomedical fields. He is an inventor of technologies applied in ophthalmology, a fellow of the Optical Society of America and the Association for Research in Vision and Opthalmology, and is editor of several international journals. He founded Voptica SL and writes a science blog (http://pabloartal.blogspot.com/).