From its inception, photovoltaic technology has relied on the presence of p-n junctions, which consist of two semiconductor regions with different polarity of excess (majority) carriers: holes and electrons for p-type and n-type regions, respectively. In the presence of sunlight, an absorbed photon creates an electron-hole pair in the semiconductor. The electrons and holes migrate to their respective regions (electrons to the n-side and vice versa) and are collected as current, resulting in the photovoltaic effect. However, solar cells based on p-n junctions are neither thermodynamically nor practically optimal.

Figure 1. Schematic of an ideal solar cell based on the principle of detailed balance. Energy is represented with a vertical axis, and the horizontal axis represents physical regions of the device. EC and EV are the conduction and valence band energies, respectively.

An ideal solar cell, as used in theoretical efficiency limit calculations,1, 2 has contacts that extract only electrons on one side, and holes on the other side (see Figure 1). The material reaches the efficiency limit when carriers are extracted at their ‘quasi-fermi’ levels without impediment. Actual solar cells fail to operate in this ideal manner: p-n junctions do not extract at the quasi-fermi levels, which leads to a voltage loss. There is additional recombination loss of minority carriers (i.e., electrons and holes for p-type and n-type regions, respectively) at the contacts,3 while metal-insulator-semiconductor contacts suffer from tunneling losses in the extraction process.4 However, practical implementation of the ideal device is feasible by careful control of ‘band bending’ (see Figure 2). We call such a device a ‘carrier selective contact device.’5 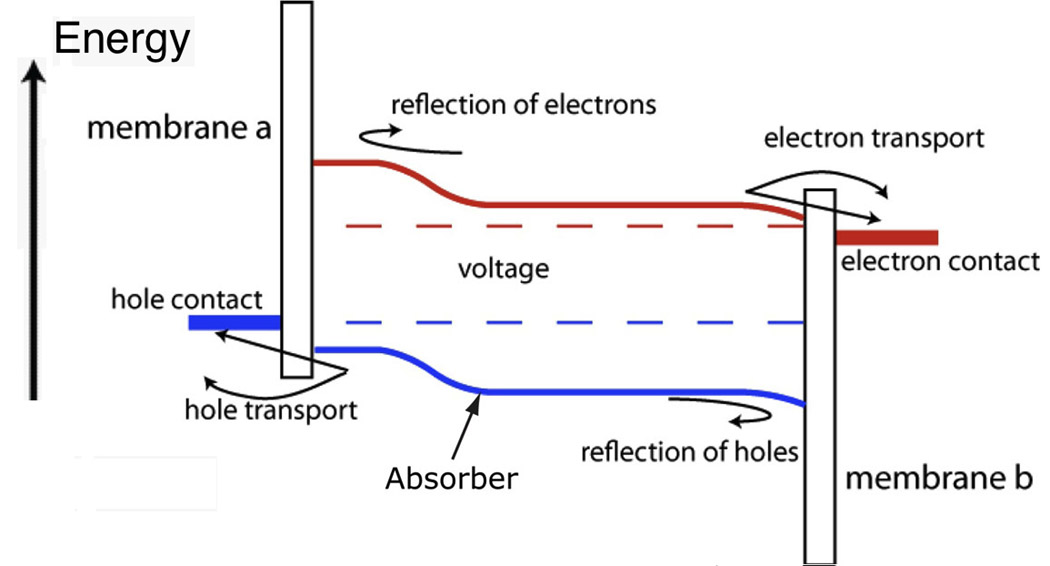 Figure 2. Schematic diagram of a carrier-selective contact device. The ‘absorber’ is the absorbing medium of the device. The contacts, labeled as ‘hole contact’ and ‘electron contact,’ extract the current.

A carrier-selective contact device gets around the requirement of a p-n junction by using the inversion—which occurs when the polarity of the dominant carrier type is reversed due to band bending—and charge accumulation at its surfaces to selectively extract carriers at their respective contacts. Intrinsic processes determine the device recombination, and allow the devices to attain the thermodynamic limit of open circuit voltage. In the presence of light, photogenerated minority carriers diffuse to the edges of the space charge region on either side of the absorber. The inversion region provides an electric field that selectively extracts one type of carrier, while repelling the carrier of opposite polarity (see Figure 2). A similar effect occurs at the other contact due to accumulation at the surfaces, with the difference being that electrons are extracted and holes are reflected back.

The carrier-selective device implements the ideal solar cell given constraints on the absorber, the membrane layer, and the contact layer. It does not rely on the optical or band structure properties of the absorber material. Thus, the absorber can consist of direct (gallium arsenide) or indirect (silicon) band-gap crystalline semiconductors, or thin film (copper indium gallium selenide, cadmium telluride) materials. The absorber can be n-doped or p-doped. It is preferable that it is intrinsic. The device operates close to the limiting photovoltaic performance so that photogenerated carriers, rather than background doping, determine the conductivity.

A membrane layer separates the highly defective contact layer from the absorber layer, transferring charge carriers generated in the absorber to the contact layer. The membrane layers should be intrinsic to minimize any loss due to recombination of carriers. Device operation is dependent on the band gap and the band alignment with the absorber. The bands should be aligned such that they provide negligible impediment to the flow of a particular carrier type, either holes or electrons (see Figure 2), while blocking the flow of carriers of opposite polarity. This requirement does not mean that the corresponding band offsets have to be negligible, since the barrier to the carrier flow is the net difference between band offset and band bending at the surface.

The contact layers are responsible for extracting a current from the device and determining the band bending at the absorber surfaces. Each of the contact layers is a combination of two layers. The outer layer (away from the absorber surface) is a metal. The inner layer is highly doped, and is the same material as the membrane layer. An advantage of the device design is that surface band bending is not controlled by the work function of the metal. This allows for a wider choice of metals. The doped layer controls band bending at the surface of the absorber by pinning the respective quasi-fermi levels throughout the operating region of the device.

A further refinement of the carrier-selective contact under investigation is the superlattice. A quantum well or superlattice is designed such that on one side of the solar cell the mini-band aligns with the quasi-fermi level of electrons (as shown in Figure 3). On the other side, the mini-band aligns with the hole quasi-fermi level and has an optimized band alignment matching for both types of carriers. An advantage of the superlattice approach compared with surface inversion is that high conductivity can be achieved with lower absorption.

We are presently depositing materials on silicon and gallium arsenide substrates using thin film and molecular beam epitaxy approaches. To date we have demonstrated the required level of band bending, and we are fabricating devices to achieve high-performance solar cells without p-n junctions.

Stuart G. Bowden received his PhD from the University of New South Wales in 1996 for work on static concentrators using silicon solar cells. He is presently the head of the silicon section of ASU's Solar Power Laboratory.

Kunal Ghosh is a post-doctoral fellow at the National Science Foundation Engineering Research Center for Quantum Energy and Sustainable Solar Technologies (QESST), which is based at ASU. His research interests include silicon and nanostructured solar cells.

Christiana B. Honsberg is a professor at the School of Electrical, Computer and Energy Engineering at ASU, and director of QESST. Her expertise includes ultra-high-efficiency solar cells, and silicon solar cells.