In the electronics that support our modern information society, information is borne by two fundamental aspects—degrees of freedom—of electrons: electron charge and its flow (current). With traditional electronics, Joule heating caused by the flow of charge is unavoidable, and the achievable density of practical electronic devices is reaching its limits. The relatively new technology of spintronics, which exploits electron spin, overcomes these problems and, as a result, has been studied extensively.1 In a magnetic field, the spins of individual electrons precess around the direction of the magnetic field. In a magnetically ordered material, the interaction of spins leads to a propagating wave of spin precessional motion. This ‘spin wave’ shows promise as a new kind of information carrier even in an insulator.2–4 This phenomenon has attracted much attention in the field of ‘magnonics,’ that is, using the spin wave that is generated, controlled, and detected as an information carrier. One critical challenge, however, is to establish a suitable control technology for the propagation of spin waves.

Until now, spin waves have been generated by microwaves from an antenna or by spin-polarized current.5–7 However, once the antenna and electrode have been microfabricated and a magnetic field applied, the propagation characteristics of the spin wave cannot be tuned directly. As a first step toward arbitrary tuning of the spin wave propagation without the use of microfabrication, my coworkers and I have proposed a model concerning the wavenumber distribution of a spin wave generated by focusing an ultrashort light pulse on a magnetic substance.8

When a circularly polarized light pulse of high intensity (pump pulse) is focused on a magnetic material, a spin precessional motion will start within the light spot via the inverse Faraday effect, whereby an effective magnetic field is generated along the beam direction.9, 10 The precessional motion then propagates outside the pump light spot in 2D in the form of a spin wave. In our proposed model, the wavenumber distribution of an initial state of the spin wave induced by the pump pulse is determined by the Fourier transform of the spatial intensity distribution of the pump pulse.

In experiments, we used a garnet ferrite single crystal as a sample. Initially, the magnetization lay in the plane parallel to the sample surface when in a 1kOe magnetic field also directed parallel to the sample surface. When a circularly polarized pump pulse with a pulse width of ∼100fs was focused in a circular spot (50μm in diameter) on the sample surface, spin precessional motion occurred within the spot via the inverse Faraday effect. The magnetization deviated from the plane and the out-of-plane component became nonzero. This out-of-plane magnetization component was detected by the Faraday rotation (polarization rotation) of a low-intensity linearly polarized pulse (probe pulse). A time-resolved pump-probe experiment was carried out by measuring the Faraday rotation angle of the probe pulse, which is time-delayed with respect to the pump pulse. The precessional motion propagated in 2D out of the pump light spot in the form of a spin wave (see Figure 1). By scanning the relative position of the probe light spot on the sample with respect to the pump light spot, we observed time- and space-resolved spin wave propagation: see Figure 2(a). 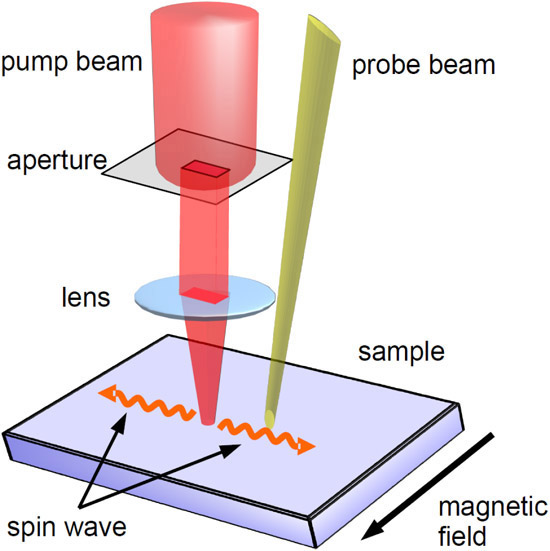 Figure 2. 2D spin waveforms obtained by (a) experiment and (b) simulation. The time delay was 1.5ns. Red and blue represent positive and negative Faraday rotation (i.e., the z-component of the magnetization is positive or negative), respectively. H: The magnetic field.

We found that the wavelength of the spin wave was 200–300μm, and the group velocity was about 100km/s. A simulation based on the model was able to reproduce the experimental result almost exactly: see Figure 2(b).

According to our model, it is essential to optimize the shape of the pump light spot at the sample surface to control the direction of spin wave emission. Thus, we inserted a rectangular aperture into the front focal plane of the pump beam lens to make an elliptical spot shape on the sample surface (see Figure 1). When the major axis of the ellipse was aligned parallel or perpendicular to the applied magnetic field, the experiment and the simulation both showed a spin wave propagating perpendicular or parallel to the magnetic field, respectively (see Figure 3). In this way, we achieved directional control of the spin wave emission.

Figure 3. Amplitude maps of spin waves obtained by simulations. The longer side of the aperture was (a) parallel and (b) perpendicular to the magnetic field. The time delay was 1.5ns.

Recently, a spatio-temporal pulse shaper has been used to control lattice vibrational waves but not spin waves.11 In our technique, neither microwaves nor spin-polarized current are used at all; the spin wave is generated and directed only by the spatially shaped light pulse. We expect that our technique will allow much higher design flexibility in magnonics, and that this technique will pave the way for a new field of ‘opto-magnonics’ for manipulating spin waves with light spots of various shapes. We are now working on spatial light modulation using computer-generated holograms toward arbitrary tuning of the spin wave propagation.