Elastography is an emerging branch of medical imaging that uses mechanical contrast to better characterize tissue pathology than can be achieved with structural imaging alone. It achieves this by imaging a tissue's response to mechanical loading. Although commercial products based on ultrasonography and magnetic resonance imaging (MRI) have been available for several years, these new modalities offer superior tissue differentiation deep in the human body. However, elastography is limited by its low resolution compared with the length scales relevant to many diseases. Increasing the resolution with optical techniques might offer new opportunities for elastography in medical imaging and surgical guidance.

An elastography system requires a means of loading the tissue to cause deformation and an imaging system with sufficient sensitivity and range to capture this deformation. Implicit in these requirements is access to the tissue of interest. Optical elastography has previously been largely based on schemes that suit small tissue samples rather than intact tissue in living humans. Additionally, such schemes have not had the sensitivity or range to produce high-fidelity images of mechanical properties. We have addressed both these issues in our recent work, developing the means to access tissues in vivo and improve the sensitivity and range of optical elastography using phase-sensitive optical coherence tomography as the underlying modality. The use of optical coherence tomography to perform elastography has come to be referred to as optical coherence elastography.1

To make optical coherence elastography on human subjects feasible, we designed an annular piezoelectric loading transducer (see Figure 1), through which we could simultaneously image, enabling the first in vivo dynamic optical coherence elastography on human subjects.2 We were subsequently able to extend this to three dimensions (see Figure 2), in collaboration with Stephen Boppart's group at the University of Illinois at Urbana-Champaign.3 This extension took advantage of the high speed of spectral-domain optical coherence tomography, and the maturity of phase-sensitive detection techniques originally developed for Doppler flowmetry and microangiography. 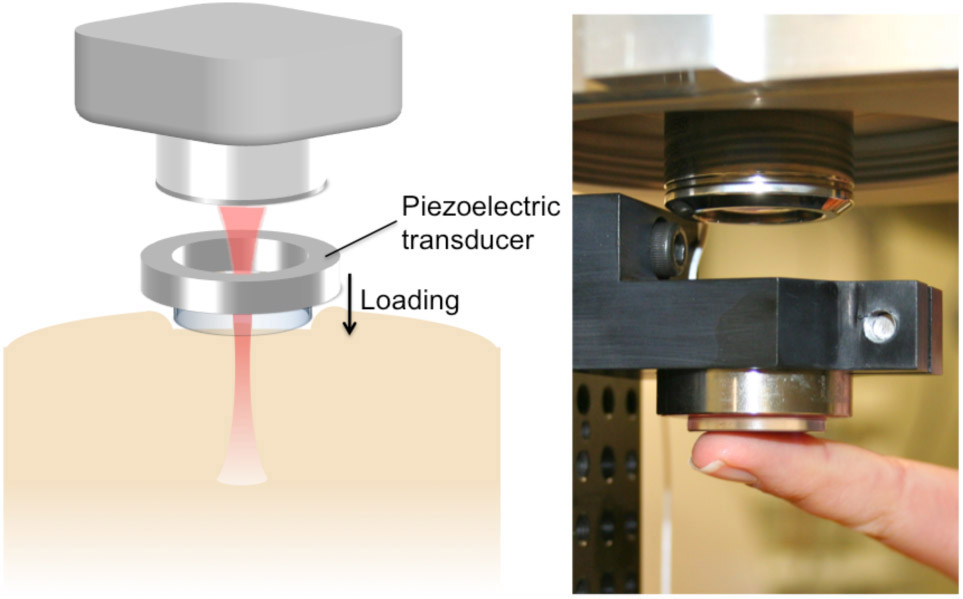 Figure 1. Schematic (left) and photograph (right) of the annular load transducer and imaging optics for in vivo optical coherence elastography. 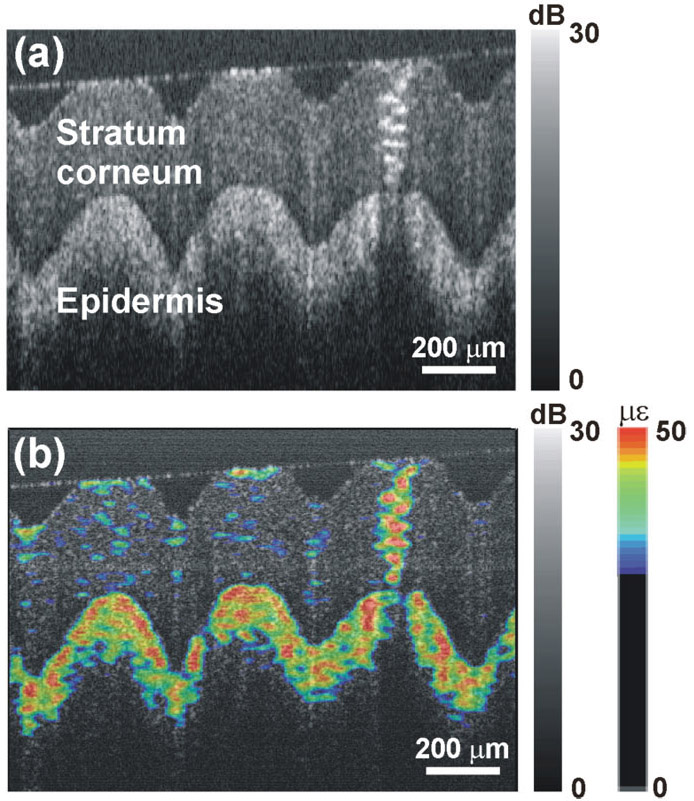 Figure 2. 2D images of in vivo human skin selected from 3D stacks. (a) Optical coherence tomography image and (b) the same image overlaid by the 2D dynamic elastogram recorded at 125Hz load frequency, highlighting the greater strain in the epidermis. Reprinted in modified form with permission.3 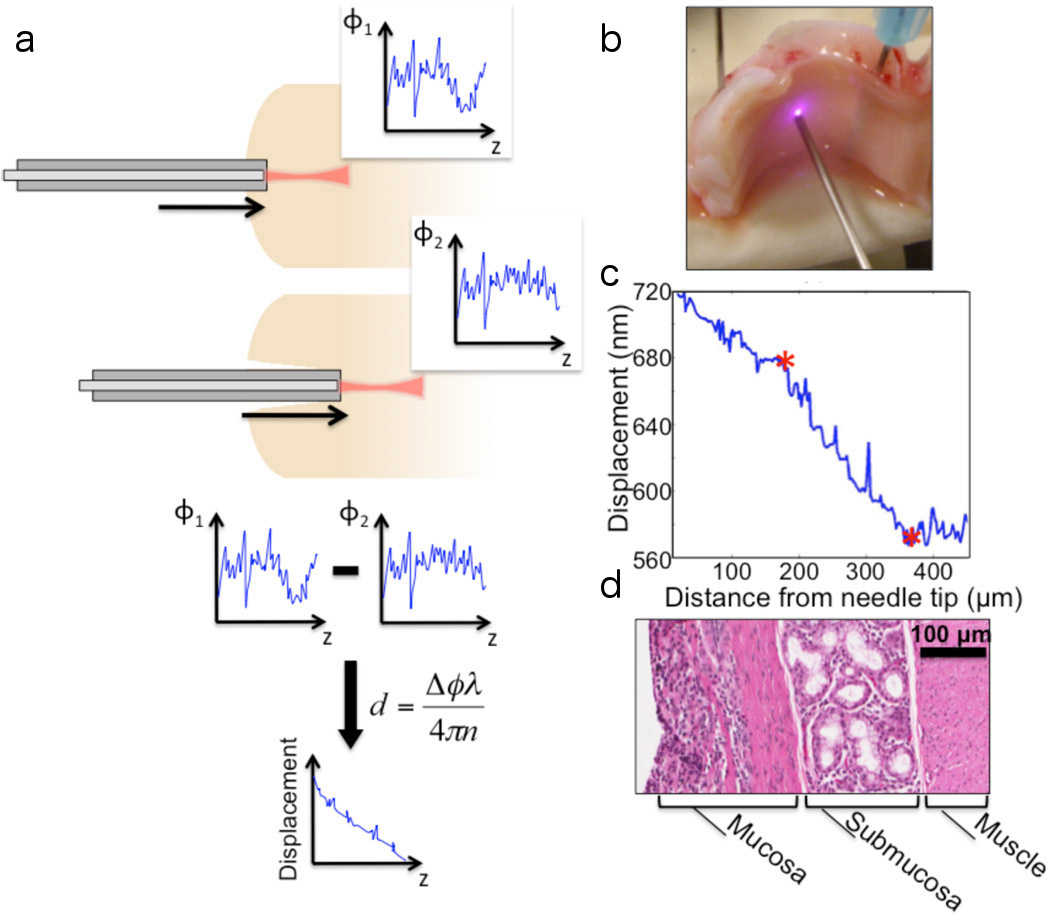 More fundamentally, optical coherence tomography can only penetrate, at best, 1–2mm into most tissues, limiting it to superficial applications. To address this issue, we combined optical coherence elastography with needle probes, an active research area in our group (see Figure 3).5 We conveniently use the needle probe itself to deform the tissue during insertion.6 The deformation ahead of the needle tip depends on the mechanical properties of the tissue encountered, as well as on the nearby tissue environment, particularly on any interfaces ahead of it. We measure the local sub-micrometer displacement of the tissue between two positions of the moving needle probe. We plot this displacement versus distance ahead of the probe: see Figure 3(c). The slope of the displacement at location z is a measure of the local strain. A change in slope signifies a change in tissue stiffness; the steeper the slope, the softer the tissue (other things being equal). Figure 3 highlights this effect in a layered sample of pig trachea. The positions of the changes in slope correlate well with the tissue interfaces shown in the accompanying histology: see Figure 3(d).

The other key area of improvement we have focused on is lowering the optical coherence elastography noise floor by increasing the detection sensitivity, which is vital to make clinical imaging practical. We firstly showed that Gaussian-smoothed, weighted-least squares strain estimation improved the sensitivity of estimates by up to 12dB over conventional finite-difference methods.7 Next, we showed that performance could be further improved at low optical coherence tomo- graphy signal-to-noise ratios (and, therefore, at greater depths in tissue) by employing a 2D Fourier transform technique.8Combined with other system refinements, these improvements have enabled us to reach a displacement sensitivity of 300pm for typical optical coherence tomography signal-to-noise ratios in tissue, with room for improvement.

The Young's modulus of soft tissue varies from kPa to tens of MPa, whereas the scattering coefficient of such tissues—which is largely responsible for determining the contrast of optical coherence tomography—is typically in the range 2–20mm−1. This apparent native advantage in mechanical over optical contrast (see the example in Figure 4), combined with the maturation of optical coherence elastography methods, bodes well for the future. In our group, we are pursuing tumor-margin identification using elastography; others have begun to consider corneal elastography,9, 10 and still others are examining shear wave schemes with the aim of probing Young's modulus much deeper in tissues.11,12 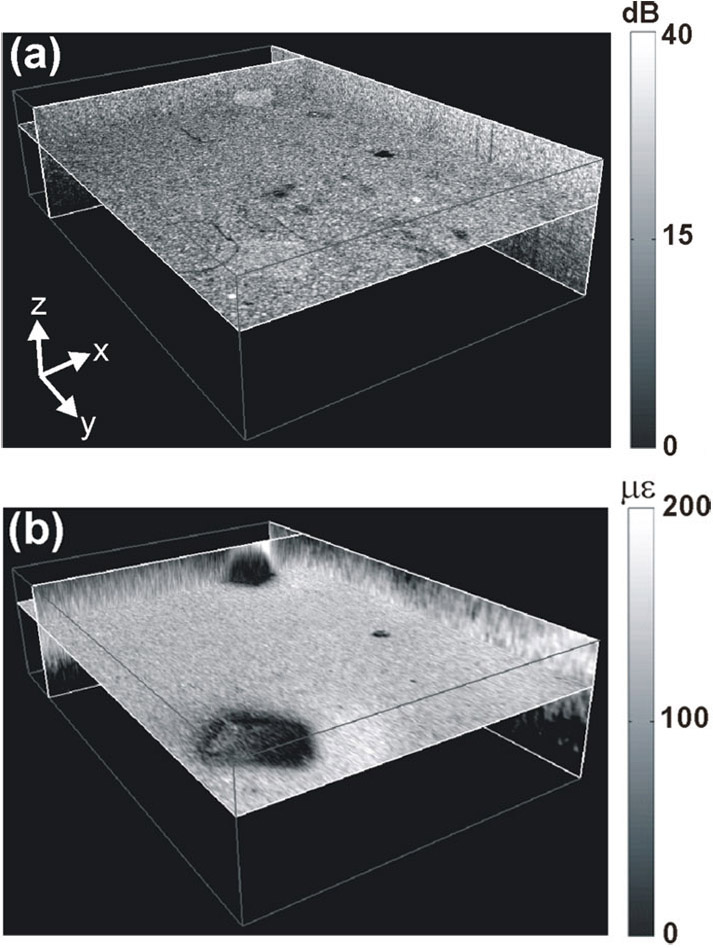