Despite our best efforts to protect them, optronical sensors and human eyes are easily damaged by intense laser radiation. New materials are needed to limit laser intensity, and nanoparticles are potential candidates for this purpose. They can be designed in size and shape to influence their optical properties. Dispersed either in a solvent or in a solid matrix, they can be used as a nonlinear filter to limit the transmission of high intensity laser radiation when placed in the focal plane of an optical system.1 Such devices, known as optical limiters, have the potential to protect different types of sensors and the human eye against laser-induced damage.2 The performance of an optical limiter device depends on laser pulse duration, laser wavelength, f-number of the optical system, and the type of nanoparticles used. Potent limiting materials must respond within the laser pulse rise time and ideally work over a broad spectral range.3

However, the interaction of intense laser light with materials leading to nonlinear attenuation of the transmitted laser beam is not fully understood, and modeling is difficult. Higher order processes like excited state absorption and nonlinear scattering take place. In order to get a deeper insight into these mechanisms, we studied how the nonlinear transmission and the nonlinear scattering properties of dispersed nanoparticles depend on the particles' shapes.

Besides the well-known carbon-based nanomaterials extensively studied in the 1990s, metallic nanomaterials are the best known.4 In particular, gold and silver are probably the most interesting ones.5,6They display an absorption band in the visible and near IR part of the spectrum which is based on so-called surface plasmon resonances (SPR) arising from collective oscillations of free electrons when illuminated with light. Generally speaking, the SPR frequency depends on the type, size and shape of the nanoparticles, as well as on the surrounding medium.

We tested silver nanoparticles of different sizes and shapes, such as nanoplates, flowers and polyhedra, dispersed in a solvent. We characterized them using nonlinear transmittance and scattered intensity measurements when exposed to nanosecond pulses from a neodymium-doped yttrium aluminum garnet (Nd:YAG) laser operated at 532nm or 1064nm.

We measured the nonlinear transmittance of the samples using a Q-switched Nd:YAG laser, manufactured by Coherent Infinity, working at a wavelength of 1064nm or 532nm, pulse width of 3ns and repetition rate of 3Hz. We placed samples in the intermediate image plane of the Keplerian telescope (formed by the lenses L1 and L2), providing an optical system with f-number f/5. The spot sizes were measured to be 4μm at 532nm and 8μm at 1064nm.

To identify the residual hazardous energy transmitted through the sample, we measured the focusable energy (or encircled energy). The focusable energy is defined in general as the energy detected within a solid angle of 1.5mrad. This was achieved using the lens L3 (focal length 400mm) and the pinhole A3 (diameter 600μm) in front of the signal photodiode (see Figure 1).

The normalized nonlinear transmittances at 532nm and 1064nm for different silver nanoparticles and carbon black suspensions in ethyl alcohol are shown in Figure 2a-b. We varied the input fluence from 100μJ/cm2 to approximately 100,000J/cm2. The polyhedra and nanoplate suspensions showed a nonlinear attenuation of more than two orders of magnitude at 532nm. Nanoflowers and carbon black suspension showed the weakest nonlinear attenuation.

Figure 2. Nonlinear transmittance of suspensions containing differently shaped nanoparticles at the wavelengths of (a) 532nm and (b) 1064nm. CBS: Carbon black suspension.

In order to investigate the angular scattering characteristics of the samples, we used a different experimental setup (see Figure 3). We mounted the detection system on a rotating stage to allow the assessment of angular scattering diagrams from 20° to 155°. The rotation axis of the detection stage and the point of focalization of L3 were carefully overlapped to provide accurate measurement. The scattered signal from the sample was imaged onto the entrance of an optical fiber via a 4f optical system (f=40mm). The input fluences on the samples varied from 1 J/cm2 to 70 J/cm2, starting in the linear regime and going into the nonlinear regime. 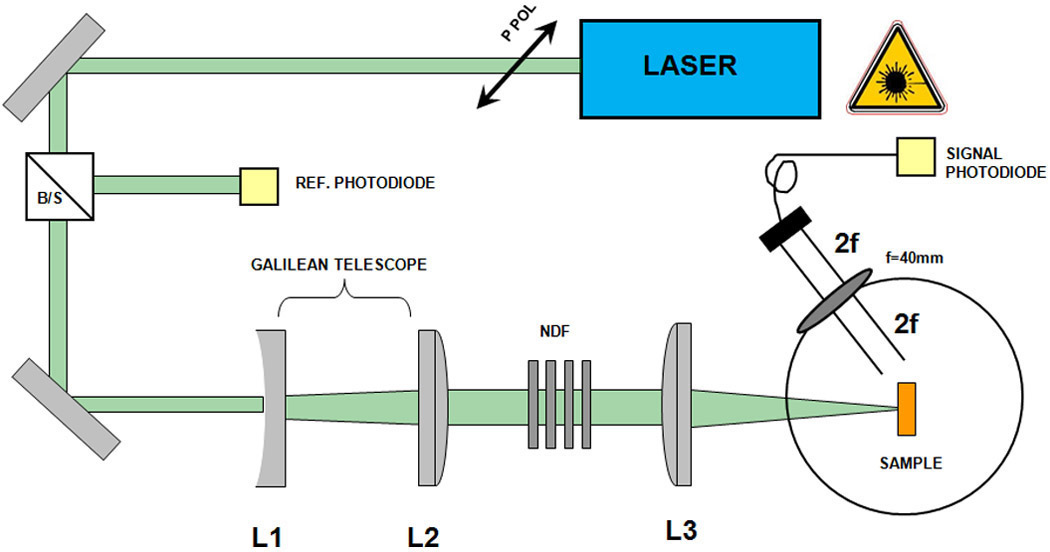 We measured the angular scattering distributions (see Figure 4) for different incident fluence levels: at 532nm in the linear transmission part (Finc=3.5J/cm2), near the nonlinear threshold (Finc=9.6J/cm2), above the threshold (Finc=39J/cm2), and for Finc=7J/cm2 at 1064nm. Our measurements at both wavelengths do not support that the optical limiting of silver particles is ruled or improved by the surface plasmon resonance and thus by the particles' geometry. We deduced this by comparing our results at the two wavelengths and observed that the threshold for optical limiting (defined by the reduction of transmission to 50% of the initial transmission) does not change with the wavelength-dependent strength of the surface plasmon resonance of the different particle shapes. The best results (lowest threshold and highest attenuation) were achieved with spherical silver particles independent of the surface plasmon resonance. The nonlinear part of the transmission curves does seem to be influenced by the SPR (see Figure 2a-b). The so-called plasmon band bleaching effect takes place in the vicinity of the nonlinear threshold, leading to different slopes with different attenuations.6 Previous work by Dong et al. reported that the nonlinear properties of gold nanoparticles depend on their shapes (icosahedrons, tetrahedrons, and cubes), but they did not compare their results with spherical particles.7

The results of our scattering analyses give a closer insight into the complexity of the limiting process.8, 9 The different nanoparticles show very different backscatter characteristics. When compared to the measured nonlinear transmittance curves of the different materials, this indicates their significant role in the optical limiting process.

In order to improve optical limiting, one has to understand the individual mechanisms that take place when intense laser light interacts with materials. Among these mechanisms are nonlinear absorption, nonlinear change of refractive index, and plasma generation, all followed by nonlinear scattering. Understanding the influence and strength of the individual contributions from an experimental or theoretical point of view would help to optimize materials. Our next step will be to set up a model of the different processes involved to simulate the attenuation process.

Bernd Eberle is a senior scientist in the Department of Optronics. His research explores fundamental and applied aspects of nonlinear materials for optical applications.

Stefanie Dengler has worked as a physicist in the Department of Optronics since 2008. Her current scientific research focuses on the synthesis, characterization and investigation of nanoparticles for optical applications.

Gunnar Ritt is a research associate in the Department of Optronics. His research interests include the protection of electro-optical sensors and the human eye against laser radiation.