In Einstein's general theory of relativity, close pairs of stars produce ripples in the fabric of space-time called gravitational waves. Direct detection of these waves has so far been an elusive endeavor, given their extremely subtle effects. Still, indirect confirmation of gravitational radiation has come by measuring the shrinking orbits of massive objects in close binaries. Radio astronomers have used the precise clocks of rapidly spinning neutron stars (pulsars) to test this prediction in a handful of systems for the last few decades. The original such measurement, using the 7.75-hour Hulse-Taylor binary pulsar PSR 1913+16, was recognized with the Nobel Prize in Physics in 1993.

A newly discovered pair of white dwarf stars (denoted J0651+ 2844), orbiting each other at breakneck speed, has opened the opportunity to cleanly explore orbital decay due to gravitational radiation with observations at visible wavelengths.1 The two white dwarfs, each the burnt-out core of a low-mass star, are physically detached from one another but extremely close, separated by just one-third the distance from Earth to the Moon. The white dwarfs' orbits are inclined in such a way that we see each one eclipse the other every 12.75 minutes (see Figure 1). These eclipses make for an exceptionally precise clock. 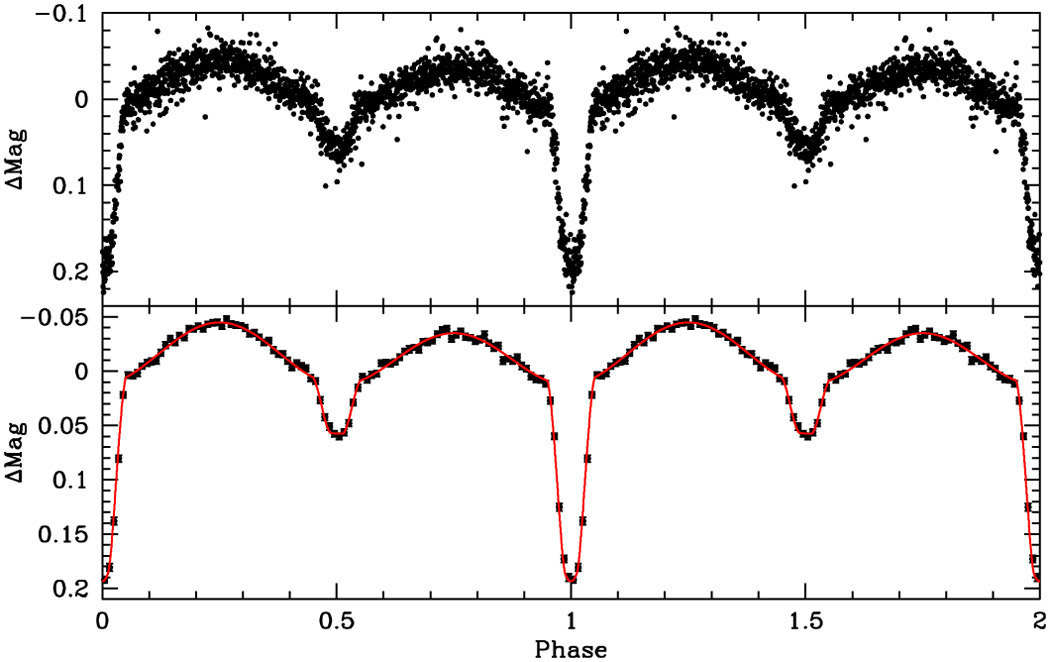 Figure 1. Light curve of the white-dwarf binary system J0651+2844, folded at the 12.75min orbital period so that the full orbit is plotted from phase 0 to phase 1, and repeated for clarity. Top: The raw light curve. Bottom: The same data, binned and with a best-fit model in red. Deep primary eclipses are seen at phases 0 and 1. Secondary eclipses occur at phases 0.5 and 1.5. ΔMag: Magnitude difference.

The total mass of both stars in the system barely exceeds three-quarters the mass of our Sun, but their extreme proximity causes strong accelerations, which produce a significant amount of gravitational radiation. The radiation robs the system of orbital angular momentum, causing the two stars to come closer together. Within one year, this orbital decay resulted in roughly a 6-second shift in the eclipse times (see Figure 2). More precisely, we measured the orbital decay to be 0.31±0.09ms/yr, consistent with the general relativistic prediction of 0.26±0.05ms/yr due to the emission of gravitational radiation.2

The brunt of the more than 200 hours of observations required for this detection were carried out with a simple frame-transfer CCD3 mounted on the 73-year-old 2.1m Otto Struve telescope at McDonald Observatory near Fort Davis, TX. Additional eclipse times were obtained with more modern optical facilities, including the 10.4m Gran Telescopio Canarias in the Canary Islands and the 8.1m Gemini North telescope on Mauna Kea, HI. 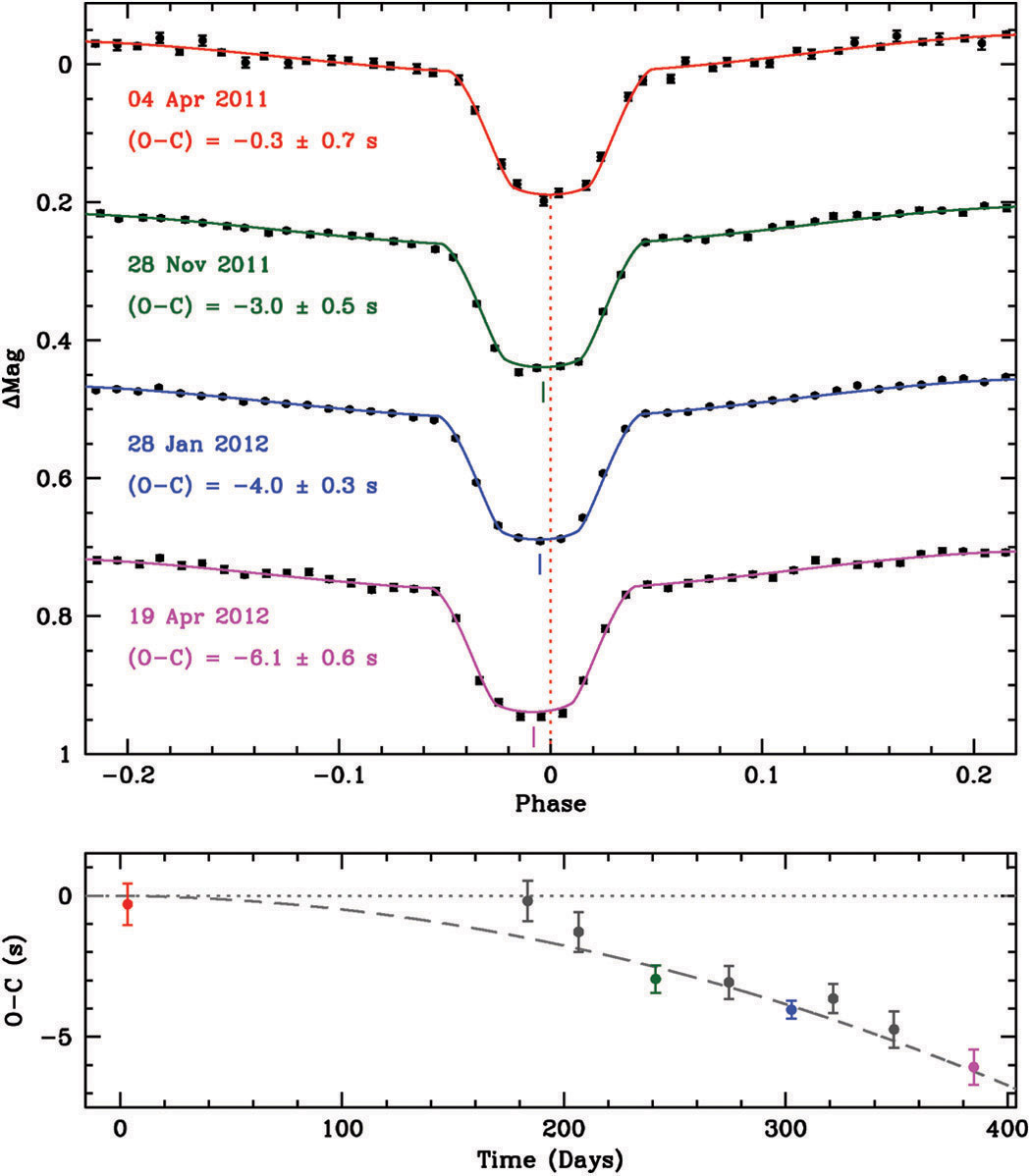 Although the emission of gravitational radiation causes the majority of the orbital decay, additional angular momentum is presumably going into spinning up the white dwarfs so their spin period matches the orbital period. This synchronization, similar to the Moon's near side always facing Earth, is dictated by the tides drawn on the white dwarfs, the details of which depend on the interior composition of each star.4, 5 This process will increase the rate of orbital decay, and makes the system an excellent laboratory to study the effects of tides on the merger of compact binaries.

Perhaps most exciting, this system is one of the best verification binaries for future space missions aimed at directly detecting gravitational waves. At an estimated distance of 1 kiloparsec, it is the second-loudest source of gravitational radiation known in the millihertz range, behind only the 5.4min binary HM Cancri.6, 7 However, the stars in HM Cancri are undergoing active mass transfer. This messy binary portends the fate of J0651+2844: in roughly one million years, the two stars will come into contact and the lighter white dwarf will begin dumping material onto its more massive companion, most likely resulting in their eventual merger into a single star.

Presently, though, the white dwarfs in J0651+2844 are detached, and their orbital period has already been constrained to better than several hundredths of a millisecond, or 10−7mHz.2 Precise measurement of this orbital period is crucial to know exactly at what frequency to look for the signal of gravitational waves from this system. There is likely to be considerable gravitational wave background noise from additional heretofore undiscovered nearby compact binaries in our galaxy.8

Observations are ongoing to further constrain the rate of orbital period change in J0651+2844, and also to constrain the role of tidal effects. This system is an extremely loud source of gravitational waves with a highly constrained orbital period. Most exciting would be matching this orbital frequency to a direct detection of gravitational waves, perhaps possible in less than a decade using a space-based interferometer, a tantalizing first step in putting our ears to the sky and listening to the universe in an entirely new way.

The author gratefully acknowledges his collaborators,2 whose support has been invaluable to this project, especially Warren R. Brown and Mukremin Kilic. This work was supported by the National Science Foundation under grant AST-0909107 and the Norman Hackerman Advanced Research Program under grant 003658-0252-2009.

J. J. Hermes is an astronomy graduate student. Prior to his foray into observational astronomy he worked as a reporter for The Chronicle of Higher Education.