Aerosols are liquid or solid particles floating in the atmosphere.1 Like cloud particles, aerosols play a significant role in Earth's radiation budget. Their optical characteristics, however, have not been fully understood, as pointed out in reports from the International Panel on Climate Change.2 Since the early 1960s, lidars (light detection and ranging systems) have been developed and employed to measure not only aerosols and clouds, but also trace gases and wind fields.3 The most basic type of lidar system is the aerosol/cloud lidar, which is often called a Mie lidar because the backscattering signal arises mostly in the Mie scattering regime. Conventionally, the Fernald method4 has been used to solve the lidar equation for retrieving aerosol vertical profiles from Mie lidar observations.

Practically, however, there are inherent problems when this approach is applied to the analysis of real lidar signals. First, a far range must be assigned at which the aerosol scattering is virtually negligible. The aerosol distribution can normally be assumed to become negligible above a height of 5–6km. When studying aerosol-cloud interactions at cloud bottom height, however, it is often difficult to obtain a reference point beyond the cloud range because of attenuation of the laser beam. Second, the altitude range near ground level cannot be observed because of the presence of the overlapping functions.5 This situation is obviously undesirable because most of the important aerosol sources are located in the lowest part of the troposphere. Third, to reduce the number of unknown parameters, it is necessary to assume the value of the lidar ratio (extinction-to-backscattering ratio, S1) for each lidar wavelength. Because the values of this parameter can vary in a significant range (10–100sr) depending on the aerosol properties, the potential of multi-wavelength lidar observation can be fully exploited only when appropriate values of S1 are provided from ancillary information.

These problems associated with lidar observation have effectively been solved in the design concept of our atmospheric data collection lidar (ADCL) system, recently installed at the Center for Environmental Remote Sensing, Chiba University.6 Figure 1 shows a schematic diagram of the ADCL system, and Table 1 summarizes its major units. The multi-wavelength lidar unit consists of six telescopes, each 25–35cm in diameter, with additional capability for Raman and polarization observations. A slant-path lidar is employed to cover the non-overlapping region of the vertical lidar observation. Information on the horizontal homogeneity of the aerosol distribution can be retrieved by a plan position indicator (PPI) unit, in which both laser emitter and detector units are installed on a rotating table. The ground-based instruments provide the calibration data for the analysis of the multi-wavelength lidar data. They consist of a three-wavelength integrating nephelometer, an aethalometer, and a particle counter for measuring the aerosol scattering coefficient, absorption coefficient, and size distribution, respectively. 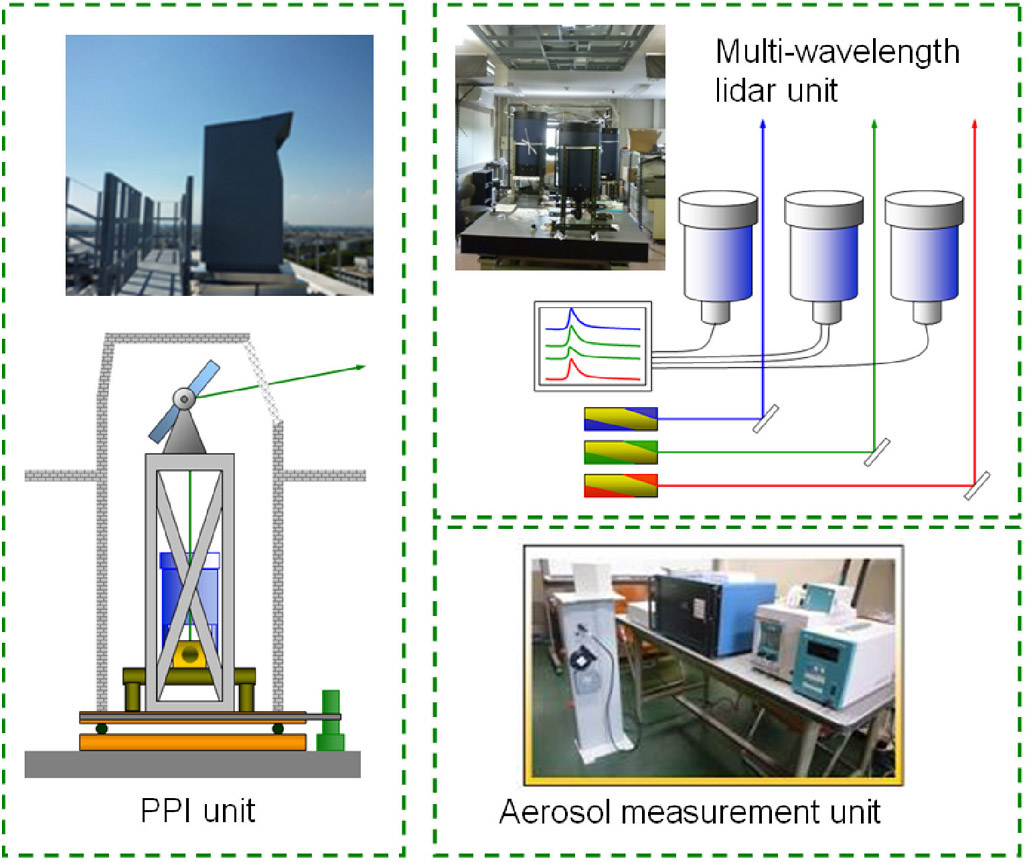 Figure 2 shows an example of a data set obtained with the ground-based instruments. The optical particle counter data in Figure 2(a) provides the size distribution data in Figure 2(b). Similarly, the scattering coefficient data in Figure 2(c) yields the normalized scattering coefficient, which can be compared with the simulated results of a Mie scattering calculation: Figure 2(d). By combining these features, we can obtain the temporal variation in the lidar ratio for the three lidar wavelengths: see Figure 2(e). These figures show that the aerosol characteristics are quite variable depending on the influence of both local sources and regional transport. 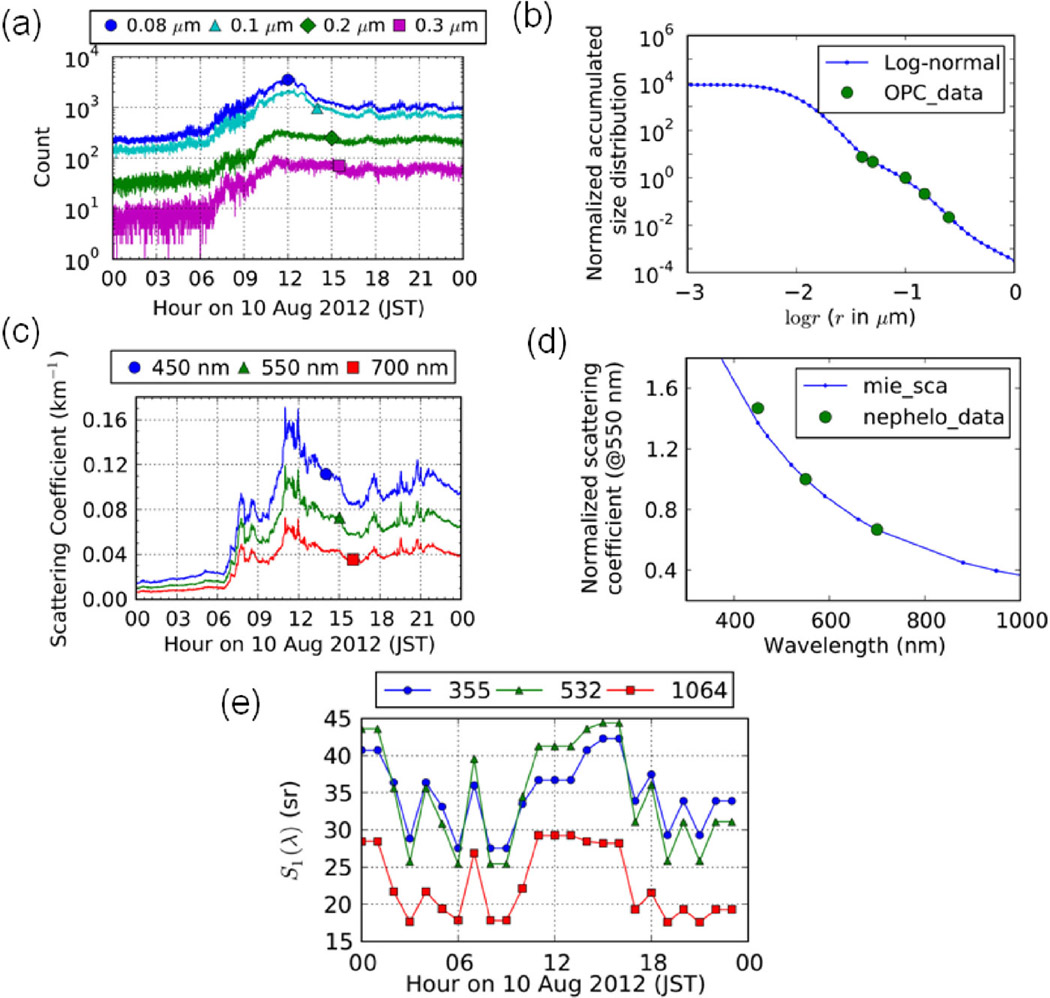 Figure 3 shows the temporal and spatial distribution obtained from the ADCL observations conducted on 10 August 2012. The temporal variation in the aerosol extinction coefficient observed with the slant-path lidar appears in Figure 3(a). When solving the lidar equation, we used the boundary values obtained by the process indicated in Figure 2. The vertical distribution in Figure 3(b), in turn, was obtained by using the slant-path data to set the extinction values in each height range. Figure 3(c) and (d) shows the horizontal distributions observed with the PPI unit. As expected, most of the PPI data indicate horizontally homogeneous distributions, but occasionally we observe spatial inhomogeneity, as exemplified in Figure 3(c). Note that although the vertical data normally represents the regional aerosol type well, care must be taken when a rather inhomogeneous distribution such as this appears. 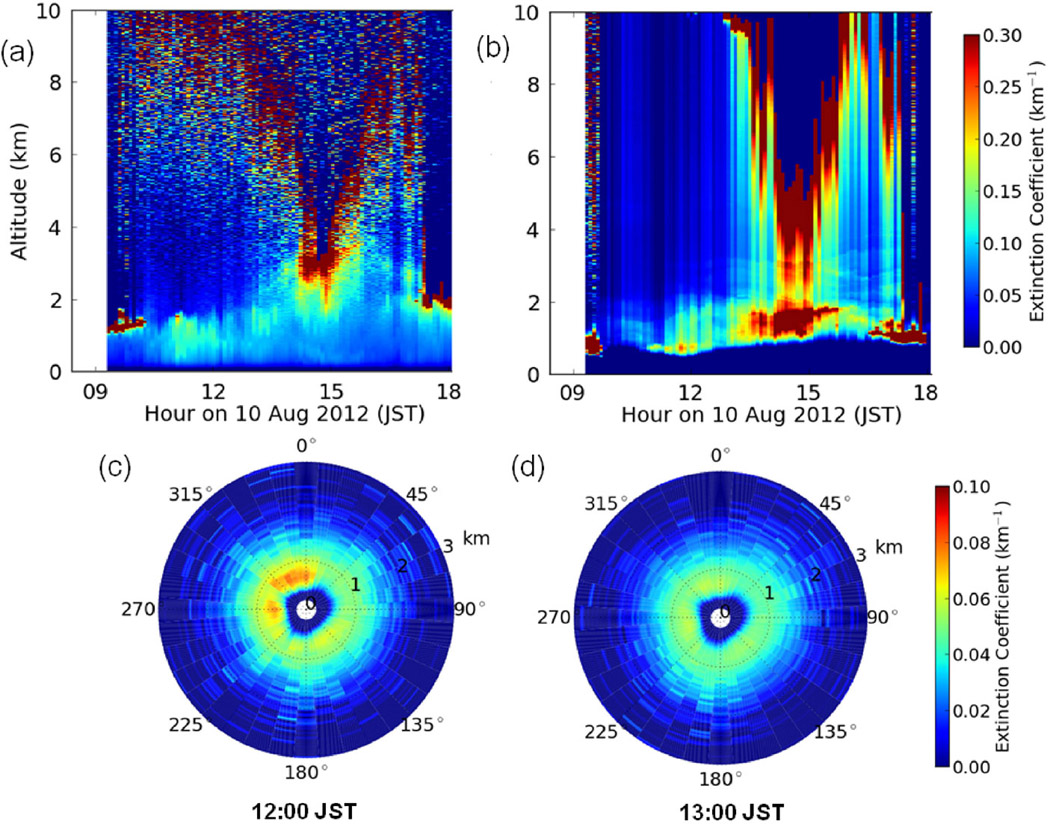 In conclusion, the novel aspect of the ADCL is its ability to retrieve tropospheric aerosol properties regardless of the presence of clouds. Hence, it enables the detailed study of aerosol-cloud interactions, which are an important issue in radiation budget studies. We plan to exploit the temporal and spatial information on the aerosol distribution in radiation budget studies and use it to obtain a better understanding and interpretation of other types of air-pollutant observation data from satellite observations and differential optical absorption spectroscopy.7

Hiroaki Kuze obtained his DSc degree from the University of Tokyo (1982). He is currently a professor and the director of CEReS.