Self-folding is a process that converts two-dimensional (2D) sheets into three-dimensional (3D) shapes in a hands-free manner. This self-assembling process is attractive for a number of applications including the assembly, remote deployment, actuation, and packaging of objects. The general strategy for self-folding involves defining hinges on planar surfaces that fold in response to an external stimulus. A number of approaches to create self-folding substrates have been developed, which include shape memory polymers that return to a pre-programmed shape in response to an external stimulus, as well as the use of multistep fabrication processes that create hinges composed of a material that preferentially responds to a uniform stimulus.1, 2 We have developed a new approach to self-folding that is distinguished by its simplicity and ability to form diverse 3D geometries using a standard desktop printer and inexpensive polymer sheets.3

Video V1 illustrates our approach to self-folding.4 The substrates consist of commercially available ‘heat-shrink’ polystyrene sheets that contract by greater than 50% when raised above the softening temperature (T>100°C). It should be noted that the polymer sheets must be pre-stressed to realize folding. With our method, a conventional inkjet printer first defines black lines on these sheets. Then the sheets are cut into a desired shape and placed under a lamp. Although light strikes the entire sheet, the black lines absorb more energy than the rest of the substrate, which causes the plastic underneath the ink to contract and form a hinge within seconds. This approach to self-folding is simple; it does not require multiple fabrication steps, and it converts a uniform external stimulus such as unfocused light into a hinging response. The substrates are essentially shape memory polymers that would shrink if heated uniformly. However, the 2D ink patterns localize the delivery of heat to the hinges, which causes the sheets to fold themselves into diverse shapes, such as cubes and pyramids.

Our initial work has focused on understanding the mechanism of self-folding and demonstrating the variety of 3D shapes that are possible using this approach (see Figure 1). The folding angle can be controlled by the varying the duration of light exposure or the width of the black lines. Furthermore, ink can be patterned on both sides of the transparent sheets, which allows the sheets to fold both up (‘valley fold’) and down (‘mountain fold’). These opposing folds are difficult to achieve using current approaches to self-folding. 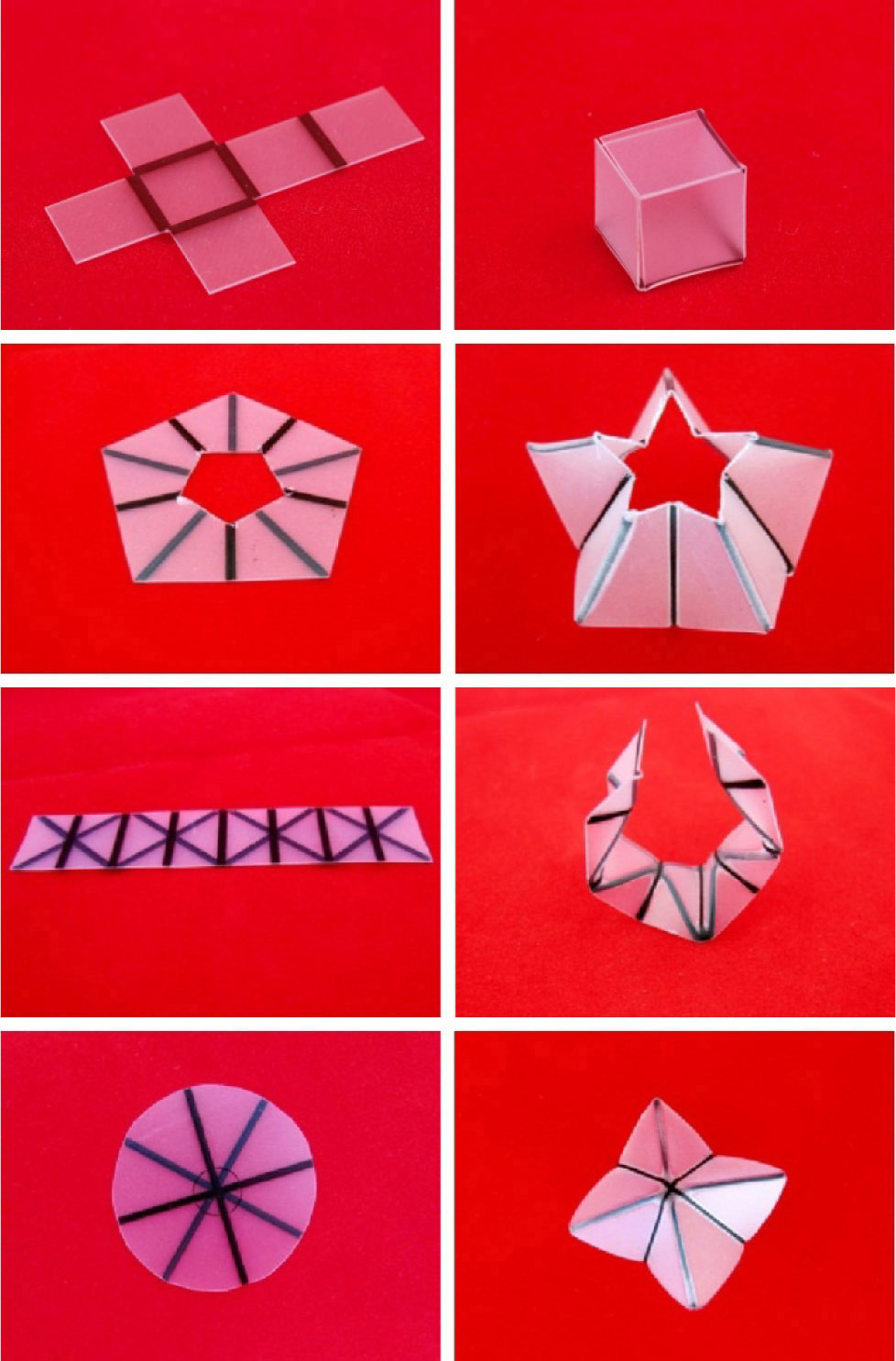 Figure 1. The left column shows flat plastic sheets patterned with black lines by an inkjet printer. When exposed to light, the sheets self-fold into complex 3D shapes, shown in the right column, within seconds. The hinge width is 1.5mm in these images.

The folding mechanism is induced when the surface temperature exceeds the glass transition of the polymer. Folding generally occurs within seconds, and faster responses can be achieved with either higher temperatures or wider hinges. We measured the onset of folding, which is defined as the time it takes to initiate folding after turning the light on. A heat transport model agrees quantitatively with these experimental measurements and confirms that the process is indeed driven by a thermal mechanism.

We used commercially available polystyrene sheets that can be printed using a desktop printer, but it is also possible to use this process with other polymeric materials and inks. Folding occurs in response to a wide range of bright light sources as well, including IR heat lamps, UV lamps, and halogen bulbs.

In summary, we present a simple approach for converting 2D polymer sheets into 3D shapes using only light. The technique is compatible with inexpensive and high-throughput 2D commercial printing techniques such as screen printing, roll-to-roll printing, and inkjet printing. These self-folding sheets may be useful for hands-free packaging, assembly, and actuation. Future work will focus on investigating ways to extend the range of materials to which this method can be applied and improve the ability to control folding.