A hybrid whispering gallery mode/plasmonic biosensor can detect and size the smallest known virus, so that no viral particle can evade detection.
02 November 2012
Stephen Holler and Stephen Arnold

The ability to detect and characterize invasive biological particles, such as viruses, within the body is critical to providing early treatment for disease. Once infected, the body serves as an incubator, allowing viral loads to build and eventually overload the immune system, leading to the manifestation of disease. The best-case scenario is a short-lived illness, while the worst case can result in death. Due to the broad variability in outcomes (influenza infection, for example, can result in varying degrees of severity) it is important to administer treatment at the earliest stage possible, but this requires the ability to detect and characterize trace quantities of unknown viral load.

In order to detect bioparticles, we considered resonant systems, which have long proven sensitive to changes in their local environment. For instance, a guitar's tone alters when its strings are tightened, and bells sound different on cold days. However, these macroscopic phenomena are not suitable for bioparticle detection. Instead, we envisioned a micro-scale system. Born of an idea conceived for telecommunications applications,1 the whispering gallery mode (WGM) biosensor uses micro-optical structures, such as glass spheres, to confine light at specific frequencies (that is, resonances or whispering gallery modes). The light typically comes from a narrow-band tunable laser source operating in the near-IR spectral regime.

Since its demonstration,2 the WGM biosensor has evolved to allow detection of biological particles of ever-smaller sizes.3 We can gauge the sensor's response to bioparticles by measuring the shift in resonance frequency caused by the particle's adsorption on the sphere's surface. Described by the Reactive Sensing Principle (RSP),4 the shift in the resonance frequency is directly proportional to the amount of adsorbed material and the field intensity at that position. The greatest shifts occur when the adsorbate falls on the equator, the orbital path of the confined resonant light.

The typical silica micro-resonator, although capable of single virus detection, cannot achieve single bioparticle sensitivity in particles much smaller than influenza A. To achieve smaller detection limits, we needed to make fundamental changes to the system.

Guided by the RSP, we realized that one means for enhancing the shift due to adsorption is to generate larger field intensities at the position where the bioparticle lands relative to the average intensity within the WGM's ring of light. We affixed a plasmonic nanoparticle to the equator of the microsphere (see Figure 1). The gold nanoparticle acts as a nanoscopic antenna, enhancing the field intensity locally through the electron oscillations of the plasmon resonance. When a bioparticle adsorbs onto the plasmonic particle it ‘sees’ greater field intensity and leads to a larger shift in the resonance frequency. 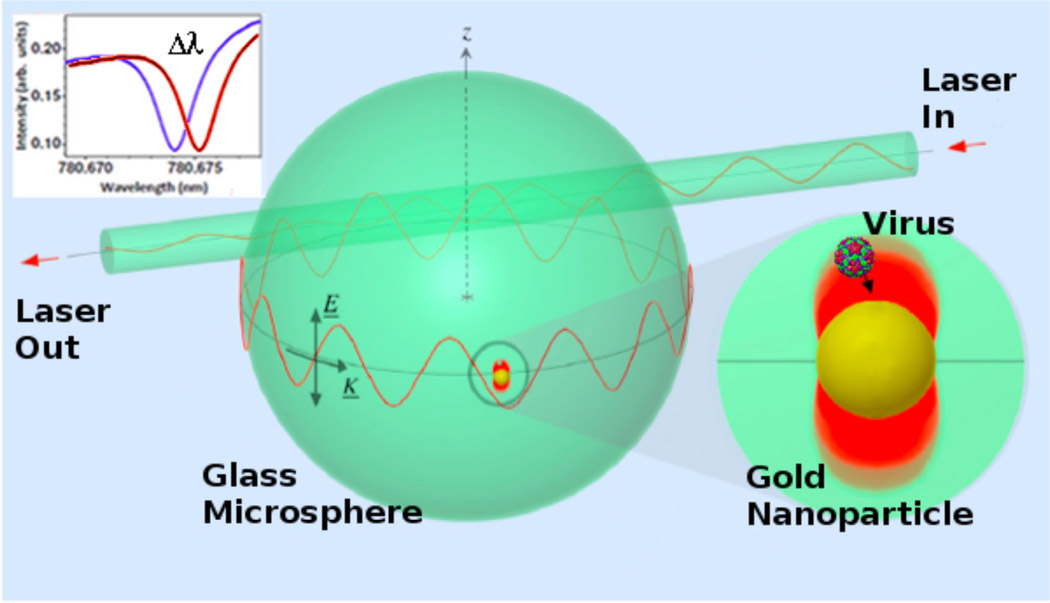 Figure 1. Geometry of the hybrid plasmonic-whispering gallery mode biosensor. Shifts in the resonance of light confined in the microsphere can be measured to detect bioparticles, such as viruses.

Our experiments using this enhancement mechanism have realized the greatest detection sensitivity to date using WGM devices. For the plasmonic nanoparticle, we used a silica core gold nanoshell,5 which has the ability to alter the plasmon resonance depending on the ratio of thickness of the gold layer to the radius of the silica core. We used 11nm shells on a 60nm radius silica sphere, which aligned the plasmon resonance with our excitation laser (780nm). The target analyte was MS2, the smallest known ribonucleic acid virus.6 We observed the enhancement in the field intensity, and therefore the resonance shift, to be ∼70×. The resulting 17fm shift from the adsorption of MS2 was easily measurable (S/N ∼8). The detection limit was computed to be 260kDa, below all known viruses and overlapping the size regime of protein.

The plasmonic enhancement of the WGM biosensor has made it possible to detect all viruses one at a time. This is essential for sizing, and it may be possible to detect single protein molecules. In the future, we aim to increase the sensitivity of the system to allow detection of single protein molecules. This could enable the screening of cancer markers, which are themselves protein molecules. Currently, there are several markers that could be detected by the WGM biosensor, and early detection of these markers could allow treatment to begin sooner, enhancing cancer survival rates.

Stephen Holler is an assistant professor of physics and engineering physics and heads the Laboratory for Micro-optics and Biophotonics. Prior to joining the faculty he was an entrepreneur working on laser-based sensors for environmental monitoring.

Stephen Arnold is a professor of physics and chemical engineering and Thomas Potts Professor of Physics. As director of the Microparticle Photophysics Laboratory he has been involved in pioneering research on micro-optical cavities for three decades, and he conceived and invented the whispering gallery mode biosensor.