Near-field scanning optical microscopy (NSOM) is a powerful tool for observing nanostructures with an ultrahigh spatial resolution beyond the diffraction limit, which otherwise stops features of less than half the wavelength of light used from being resolved.1 An NSOM probe2, 3 kept in the near-field region of the sample surface is used to depict the optical contrast of the sample by converting the evanescent wave into a propagating wave. The topographical information of the sample can be simultaneously acquired using force feedback detection. However, NSOM probes have several disadvantages, including high cost, low light throughput, degradation, and poor compatibility with various environments and samples. Therefore, the application potential of traditional NSOM is limited.

In a recent publication, we described a new near-field optic technology that circumvents some of the inherent problems of NSOM.4 A near-field cover glass slip (NF-CGS) was developed to achieve ultrahigh spatial resolution beyond the diffraction limit. Similar to standard cover glass, our NF-CGS can carry and fix various samples for traditional optical microscopy. It is composed of an optically transparent substrate, two protective layers, and an active layer that can replace NSOM probes and perform similar functions.5–8 This design helps avoid the disadvantages of NSOM probes.

We fabricated our NF-CGS using a reactive radiofrequency sputtering method. A multilayered structure of zinc sulfide-silicon dioxide (ZnS-SiO2, 130nm), silver oxide (AgOx, 15nm), and ZnS-SiO2 (40nm) was deposited on the cover glass substrate. The protective layers of the ZnS-SiO2 thin film were prepared to prevent heat shock and the oxidation of the AgOx thin film. The sandwiched AgOx thin film serves as an active layer of the NF-CGS, and the average size of the photodissociated silver nanoparticles in this layer is approximately 10–15nm. The top protective layer of 40nm ZnS-SiO2 thin film is responsible for the precise control of the fixed near-field distance between the AgOx active layer and samples. We showed that standard polystyrene (PS) nanospheres 500, 200, and 100nm in diameter could be imaged successfully using this approach. 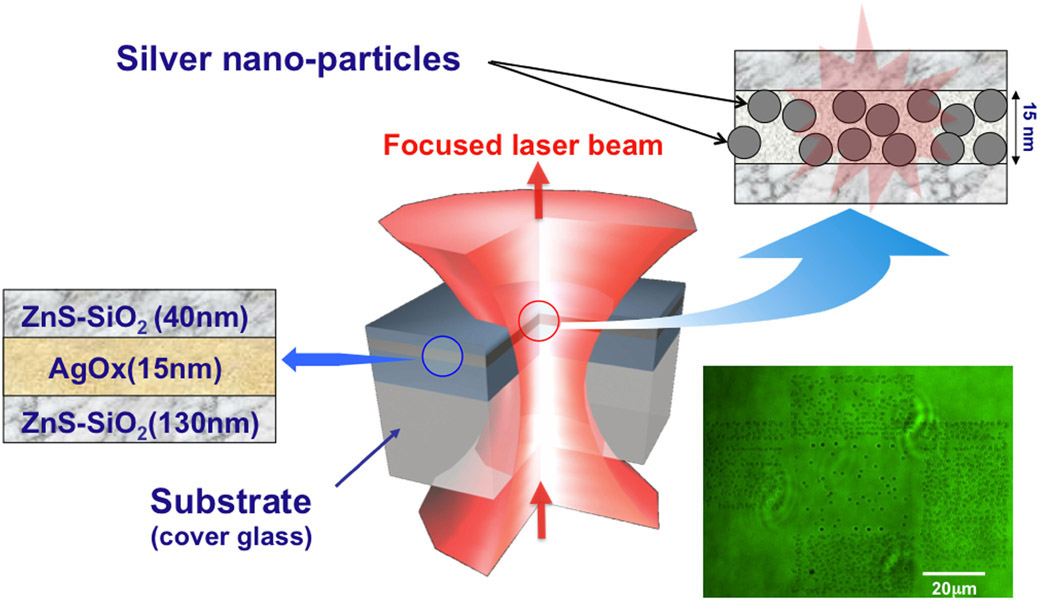 Figure 1 shows the working principle of our NF-CGS. The AgOx active layer decomposes into silver nanoparticles and oxygen in a small region heated above a threshold temperature by focused laser irradiation. Photodissociated silver nanoparticles then act as nanoscatterers for enhancing evanescent waves and also as near-field apertureless probes. That is, they transform evanescent waves into propagating waves. Subsequently, the subwavelength features of the samples can be obtained from the far-field signals, and the sub-diffraction-limited images can be reconstructed. After the focused laser is removed, the silver nanoparticles and oxygen reform the AgOx compound. However, a focused laser beam with appropriate laser power is required. The picture embedded at the bottom right of Figure 1 shows irreversible damage to the NF-CGS from excessively intense incident light.

Figure 2. (a) Optical and cross-sectional images of the three sizes of nanospheres using an NF-CGS substrate. (b) The geometric relationship among the nanospheres. The region below the red dashed line indicates the effective range of the NF-CGS.

Standard PS nanospheres of 500, 200, and 100nm diameter served as the samples and were laid on top of the NF-CGS and pure cover glass. We used laser scanning confocal microscopy (Leica, ICM1000) to obtain high-resolution optical images of the samples at various focal planes. The reflected z-scan spectra of the NF-CGS and cover glass were measured to help us estimate the focused laser plane position on each optical image. The results showed that the PS nanospheres with 200 and 100nm diameters can only be resolved using the NF-CGS substrate and when the laser is focused accurately on the AgOx active layer. Figure 2(a) shows the optical and cross-sectional images of the three sizes of nanospheres using an NF-CGS substrate. Figure 2(b) shows the geometric relationship among the nanospheres. Because the localized surface plasmon excited by photodissociated silver nanoparticles is effective in the near-field region, only the bottom of the nanospheres was successfully resolved.

In summary, we developed a novel solution for nano-optical inspection and related applications. We believe that the NF-CGS can be extensively employed in near-field imaging techniques for samples in various environments because of its simplicity, rapid laser scanning, and minimal cost. The results of this study have been granted a US patent. Our next step is to build a more complete physical model of the NF-CGS.