Developments in lithography techniques have enabled the fabrication of metal structures with structural control down to the nanometer scale. The positioning of nanostructures on a metal film changes its optical surface response, resulting in unique optical properties with potential applications in diverse fields, such as surface-enhanced Raman and fluorescence spectroscopy, molecular sensing, photonic circuits, and optical waveguides. Most of these applications rely on the optical near-field distribution and its local enhancement on nanometer-length scales.

As an alternative to conventional optical-scanning mapping techniques, we have developed a nondestructive and dry topographic modification method based on local laser ablation of an ‘imaging’ polymer layer deposited on the metal nanostructures.1, 2 Compared with other topographic methods,3,4 our laser ablation technique has the advantage of avoiding any subsequent wet chemistry processing steps, which are otherwise necessary to remove the non-exposed material. Topographic modifications can be inspected immediately and recorded using high resolution imaging techniques, such as scanning electron or atomic force microscopy (SEM and AFM). In addition, the ablation threshold for the poly(methyl methacrylate) (PMMA) polymer used is relatively low compared with other ablation approaches, hence a less powerful laser system is needed. One of the most important advantages, however, is that the quasipermanent imprint obtained can be removed using a solvent, such as acetone, enabling a fully characterized sample (in terms of electromagnetic field enhancement) to be used for further applications without degrading the metallic surface.

In our experiment, we coated a lithography-defined array of gold nanostructures deposited on a gold film by a PMMA layer with a thickness sufficient to fully cover the structures, but thin enough to be sensitive to the optical near-field of the nanostructures. The lateral dimensions of the nanostructures and the pitch distance of the arrays were chosen to achieve the strongest surface plasmon polariton (SPP) resonances and, therefore, the strongest local field enhancements in the wavelength range of the titanium:sapphire laser used (750–820nm). In turn, PMMA was chosen as an imaging layer because of its optical transparency in this range and appropriate hardness, which can be obtained during baking. 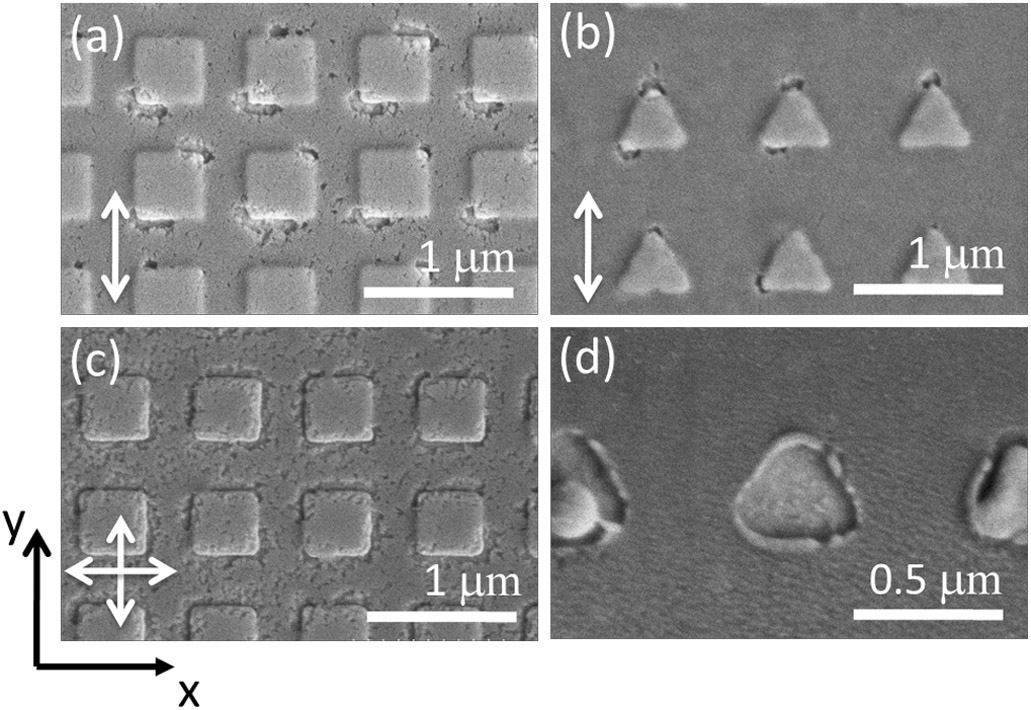 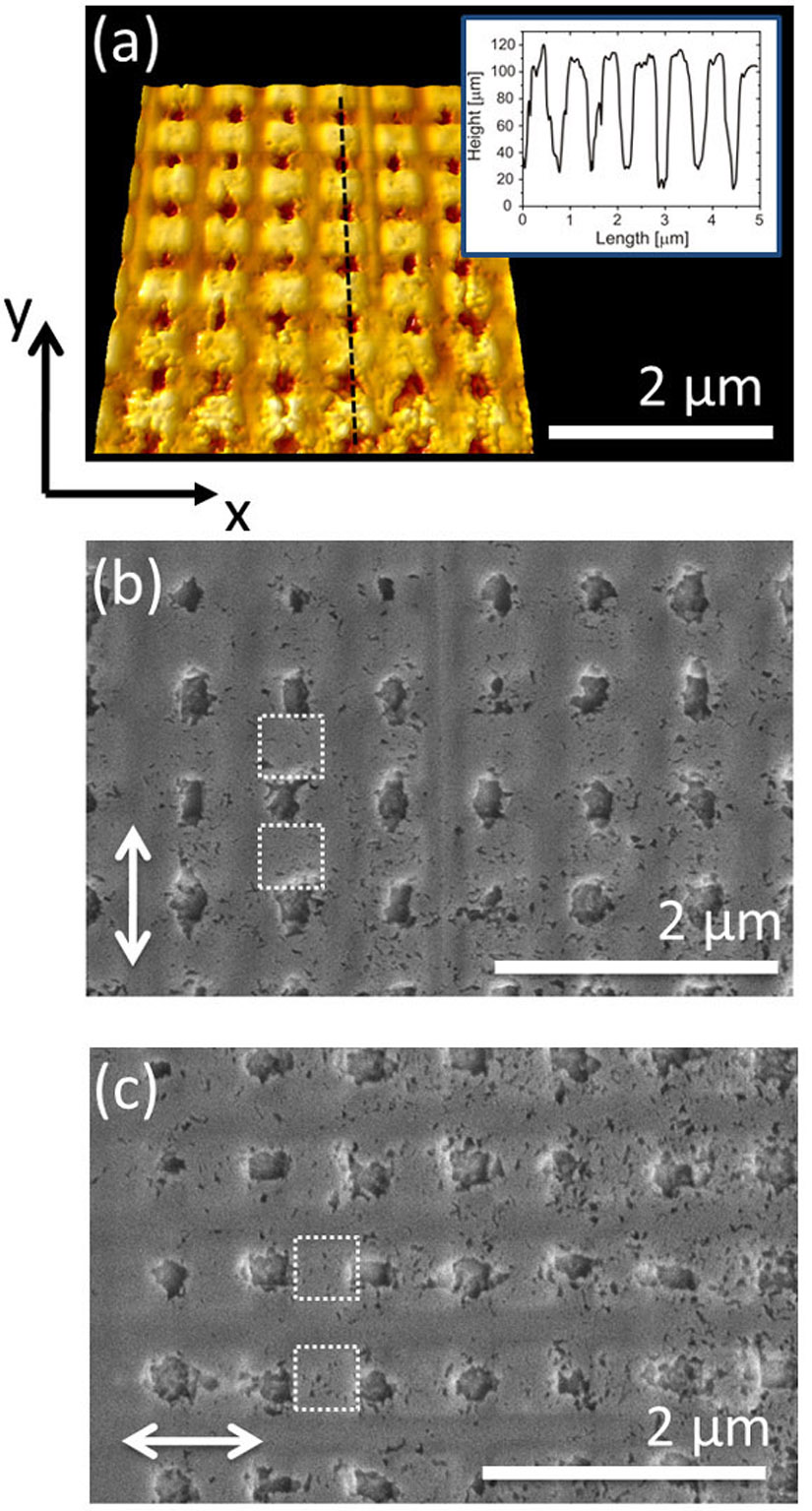 We used a laser scanning microscope, built on the basis of an inverted microscope—combined with a broadband, sub-100 femtosecond pulsed titanium:sapphire laser—to raster a diffraction-limited spot over a sample area up to hundreds of squared micrometers. The laser fluence was set to be below the ablation threshold of PMMA, so only with additional field enhancement from the nanostructures would the PMMA be ablated. After illumination, the samples were covered with a gold-palladium layer (3nm thick) and the optically-induced, topographical changes were imaged with SEM and AFM.

Variation of the polymer-layer thickness enables easy tuning of the sensitivity of the method to map either the initial ablation ‘hot spots’ (i.e., localized enhancements at the sharp corners of the structures mainly caused by the lightning-rod effect), or the collective enhancements at locations between the structures due to SPP modes.5, 6 Figure 1 shows images of surface modifications obtained in a 80nm polymer coating on arrays of gold nano-squares and nano-triangles, whereas Figure 2 shows results obtained in a 200nm thickness polymer layer. Excitation of SPP modes and their interference leads to a standing wave pattern with wave fronts perpendicular to the polarization of the incident light. Furthermore, the lateral position of the strong near-field intensity shifts to higher altitudes above the gold surface when moving away from the nanostructure edge (see Figure 2).

The method is suitable for fast qualitative and quantitative mapping of the near-field around metal nanostructures. Under the present experimental conditions we have shown that enhancements originate mainly from a combination of the lightning-rod effect and excitation of SPPs. Local field enhancements, in turn, can cause significant changes in the linear and nonlinear response of the surface, presenting the investigated nanostructures as tailorable, highly confined photon sources. In the future, we plan to apply this method for the characterization of samples with nanoparticles and nanostructured metallic surfaces with diverse photonic and plasmonic properties.

Jacek Fiutkowski is an assistant professor at NanoSYD. He received his MS and PhD degrees in physics from the Jagiellonian University, Poland. Since 2010, he has worked at NanoSYD, where his research interests are nano-optics and fabrication of nanostructures with photonic/plasmonic properties.

Christian Maibohm is a postdoctoral fellow at the Mads Clausen Institute. He received his MS and PhD degrees from the University of Southern Denmark. From 2005 to 2007 he worked at the Department of Physics, University of Siena, Italy. He has worked on bio-inspired sensors for robotics since 2011.

Horst-Günter Rubahn is professor and head of the Mads Clausen Institute. He received his PhD and his venia legendi from University of Goettingen, Germany, was a postdoctoral research associate at Stanford University, Palo Alto, CA, and was a visiting professor at University of Toulouse, France. His research interests are focused on discontinuous ultrathin organic films, laser materials interactions, microfluidics, and nano-optics.