The dramatic price drop of photovoltaic (PV) materials over the past few years means the relative cost of photovoltaic components has become increasingly small relative to the total solar system price per Watt. Further cost reduction on this basis will soon no longer be possible, but will instead require new production technologies to generate solar cells with higher efficiency or at lower cost. Aside from details of the physical solar cell concept, a main challenge in this context is to make the whole illuminated area available for charge carrier generation, for example, keeping the structures for the electrical front contacts as small as possible.

For crystalline silicon (Si) PV technology, the trend for the next generation of high-efficiency cells is to remove all metal contacts from the front side, which in turn creates a need for reliable processes to generate rear contacts. We and others have used femtosecond (fs) laser ablation techniques to optimize processing by selectively removing thin layers without noticeable structural damage to the surrounding material. Figure 1 shows a small section of a Si wafer coated with a silicon dioxide layer (approximately 100nm thick), which has been selectively removed by two single femtosecond laser pulses (one per spot). The general phenomenon behind this ultrafast removal of the thin layer is so-called cold ablation, which is a well-known phenomenon with a theoretical basis that is largely understood. Essentially, the ultrashort pulse interacts with a material in a highly nonlinear process, which evaporates the excited volume so fast that no noticeable heat conduction can occur. In fact, no heat-affected zone around the actually ablated area is present, which means that very fine structures can be produced. 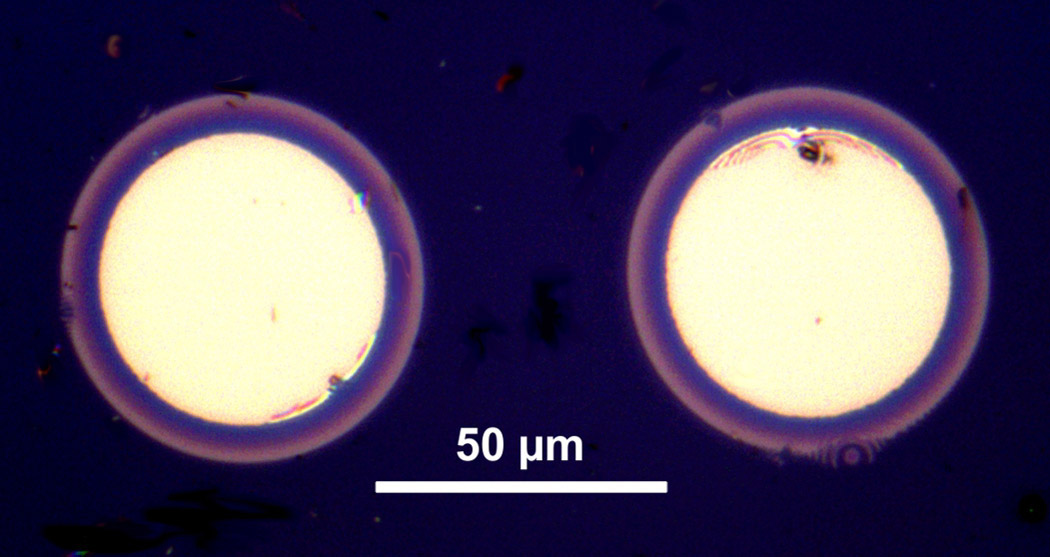 Although the concept of cold ablation from bare surfaces has been known for more than 20 years, the details of the process when applied to the case of lifting thin layers off in PV systems are somewhat surprising. As we were able to show in a very recent series of investigations,1–4 the ablation of thin dielectric layers from Si wafers works best by inputting energy into the Si, using pulses as short as possible (ideally ≪1ps), at a wavelength just below the absorption band edge of Si. Under these circumstances, most of the laser pulse energy is converted into charge carrier generation without noticeable loss to phonons, enabling the nonthermal evaporation of an ultrathin Si layer (depth <5nm). This expansion ‘blasts off’ the dielectric cap, leaving the opened surface apparently undamaged. In particular, the Si in that area remains perfectly crystalline after ablation.3 This is true from the ablation threshold up to a certain limit of fluence, above which excess energy again causes thermal damage. The fluence range accessible for ‘damage-free’ processing decreases towards shorter laser wavelengths, because those face an increasing, intrinsic loss to phonons generating unwanted heating. 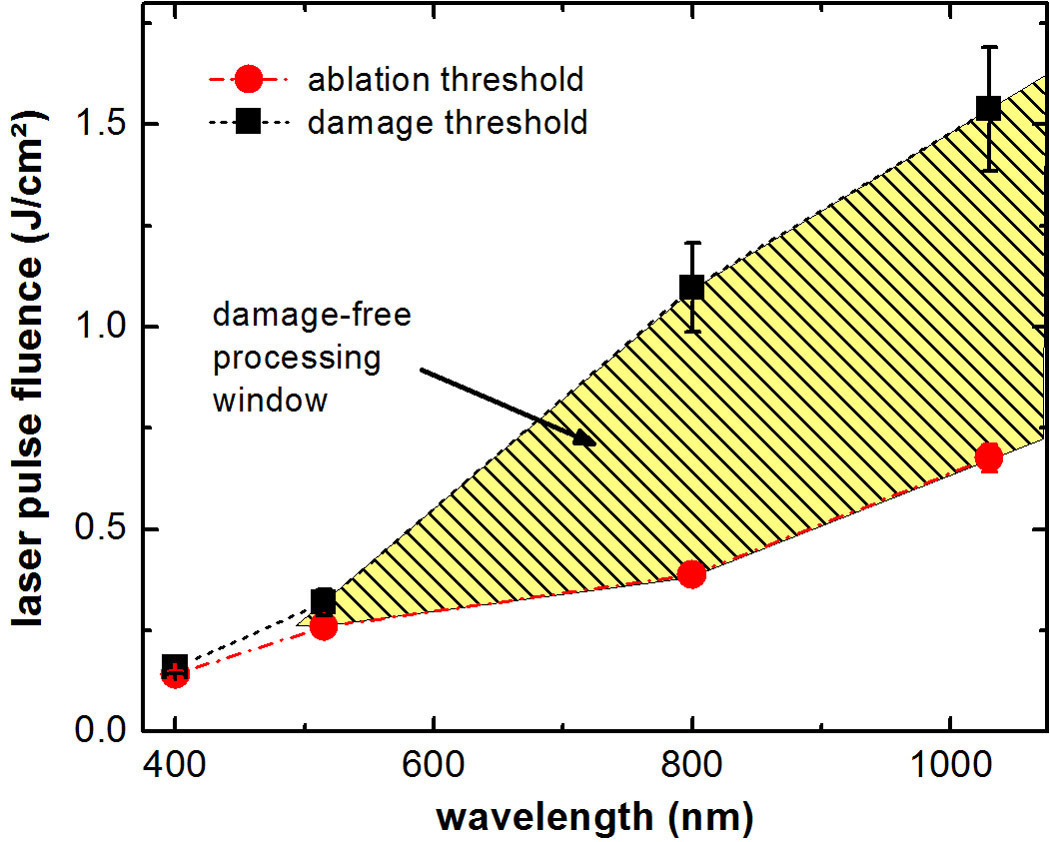 Figure 2. Wavelength dependence of ablation and damage thresholds obtained for femtosecond laser irradiation of Si wafers covered by transparent dielectric layers that are 100nm thick. Within the yellow shaded area of laser parameters, opening the Si surface is possible without structural modification in the ablated region—it is termed ‘damage-free’.

Figure 2 shows ablation and damage thresholds for several laser wavelengths, obtained for pulse duration ≤280fs. The processing window is marked by the yellow, shaded area. It should be noted that the damage-free range shrinks considerably when longer laser pulses are applied: after a few picoseconds of interaction time, truly damage-free processing is impossible. This highlights the fact that picosecond and femtosecond laser processing differ vastly. 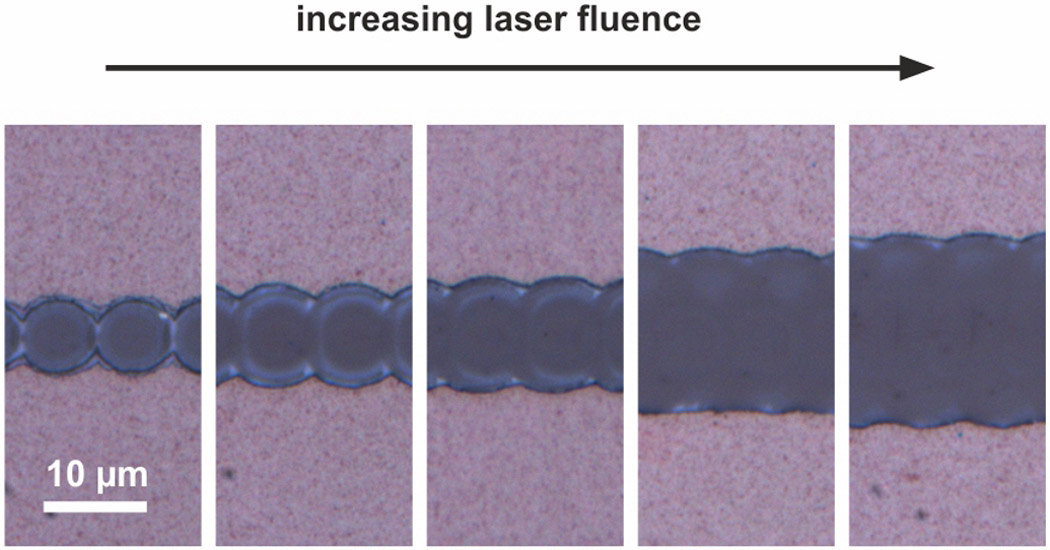 Figure 3. Microscope images of laser scribes produced with 300fs pulses in a transparent conducting oxide film on soda-lime glass by irradiation through the substrate glass, at spot-to-spot distance of 7μm. The applied laser fluence increases from left to right.

Generalizing this concept, the selective ablation of a thin layer using femtosecond pulses proceeds favorably via ultrafast nonlinear carrier generation, which arises in the semiconducting material directly adjacent to its interface with an insulator. When we apply this to the field of thin-film PVs, we propose that we can make a ‘P1 scribe’, where scribing is the removal of the transparent conductive oxide layer from the substrate glass, by femtosecond irradiation. The scribes in thin film solar cells are made during the production process in the conductive and absorber layers to generate a serial electrical connection to all active stripes of a cell. In the current production technology, scribing is mostly done by nanosecond laser processing. However, the relatively large, unavoidable heat-affected zone during that nanosecond laser processing necessitates a minimum width of approximately 200μm of optically inactive zones between the active PV stripes. Figure 3 shows the superior processing achievable using femtosecond laser pulses. The leftmost panel indicates that complete removal of the transparent conductive oxide layer—3μm minimum—can be obtained by rear-side irradiation. This provides very good electrical isolation, (resistance >106Ω).

In summary, femtosecond laser processing shows great potential for the fabrication of various types of solar cells, for example, for rear contact openings on Si-based PVs, scribes of minimized width for thin-film cells, and any other processing steps that require a flexible, non-contact method to generate precise microstructures without unwanted modification of the adjacent material. As femtosecond lasers are just crossing the threshold into industrial application, both in terms of pricing and performance, the principle advantage of femtosecond laser pulses to specifically ablate individual thin layers in PVs can be used for innovative processing steps. The minimally invasive technique outlined here should be particularly advantageous for future high-efficiency cells. We next plan to make our selective femtosecond ablation technique available for industrial use, both for silicon-based and thin-film PVs.