Optical coherence tomography (OCT) is a noninvasive optical imaging technique that can generate micron-resolution 2D and 3D images of tissue and other scattering materials.1 First demonstrated for imaging the human eye and coronary arteries in 1991,1 OCT has become a clinical standard for diagnosing and monitoring treatment of eye disease, with approximately 16 million ophthalmic OCT procedures performed in the US in 2010.2 OCT can also be used for intravascular imaging of plaque to assess heart disease, cancer biopsy imaging, developmental biology research, art preservation, and industrial inspection.

Newer Fourier-domain OCT detection methods3–6 enable orders of magnitude faster imaging speeds compared to the original time-domain methods. Fourier-domain detection can be implemented in two ways. The first, called spectral-domain OCT (SD-OCT), uses a broadband light source along with an interferometer, a spectrometer, and a line-scan camera. The second method, called swept-source OCT (SS-OCT),7 uses a wavelength-swept laser light source, that is, one whose emission sweeps back and forth across a range of wavelengths. An interferometer and a detector with a high speed analog-to-digital (A/D) converter complete the SS-OCT imaging system. State-of-the-art, commercial retinal OCT instruments currently use SD-OCT technology and take images at speeds of 20,000 to 50,000 axial scans per second. However, SS-OCT has several fundamental advantages over SD-OCT, and the research community has shown great interest in SS-OCT for demonstrating ultrahigh imaging speeds, deep tissue penetration, Doppler OCT flow analysis, and long imaging range. Indeed, record OCT imaging speeds with axial scan rates in the megahertz range have recently been shown using SS-OCT with a Fourier-domain mode-locking laser as the source of wavelength-swept light.8 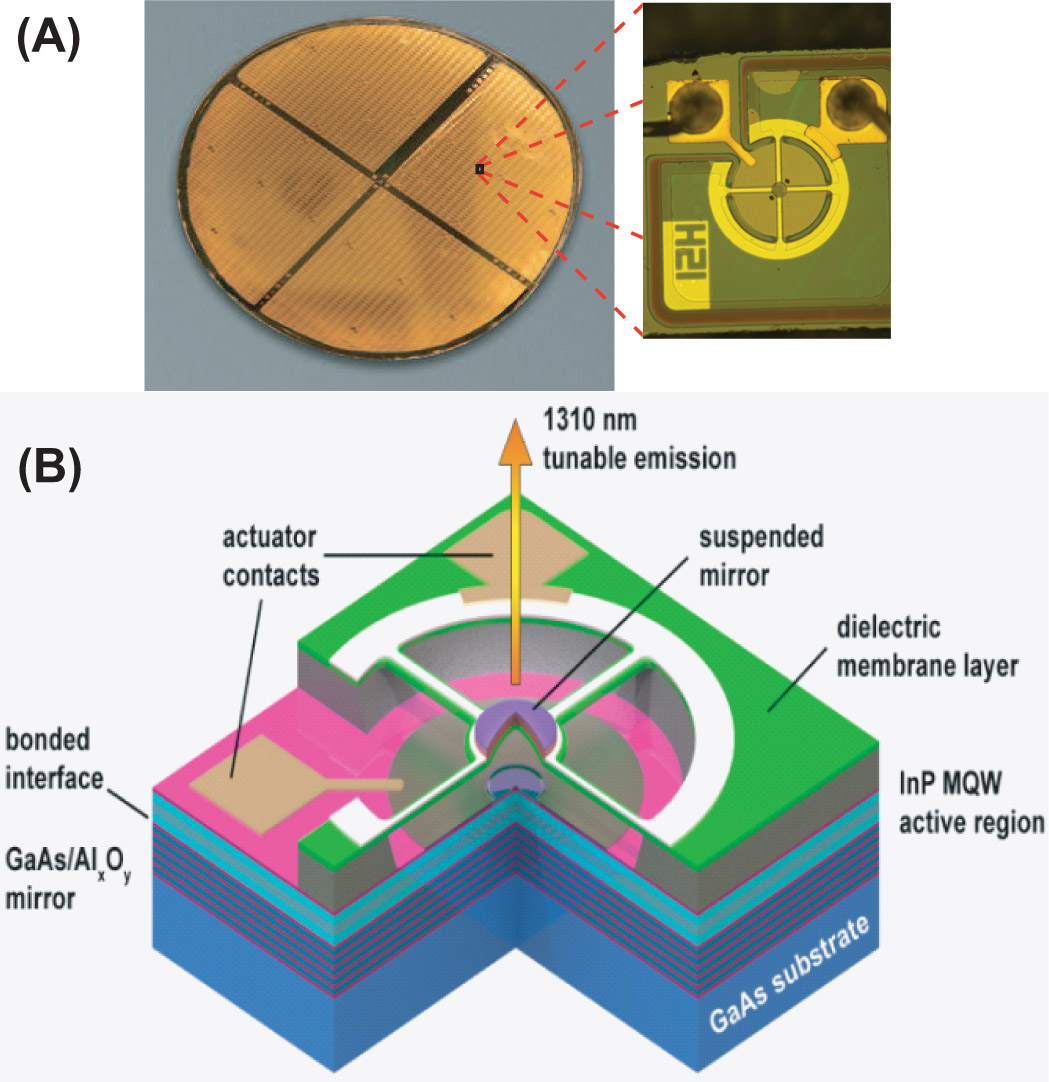 Historically, SS-OCT has been available to only a few select research groups and commercial entities because of a lack of a compact, high-performance, low-cost swept source. To fulfill this need, we developed a new light-source technology for OCT, consisting of a vertical-cavity surface-emitting laser (VCSEL) with a microelectromechanical system (MEMS) actuator to tune the emission wavelength. Our technology achieves a combination of ultrahigh sweep speeds, wide spectral tuning range, adjustability in sweep trajectory, and extremely long coherence length that has not been simultaneously achieved with any other previously demonstrated OCT light-source technology. The technical advantages of the VCSELs suggest that they are a near-ideal light source for OCT applications. 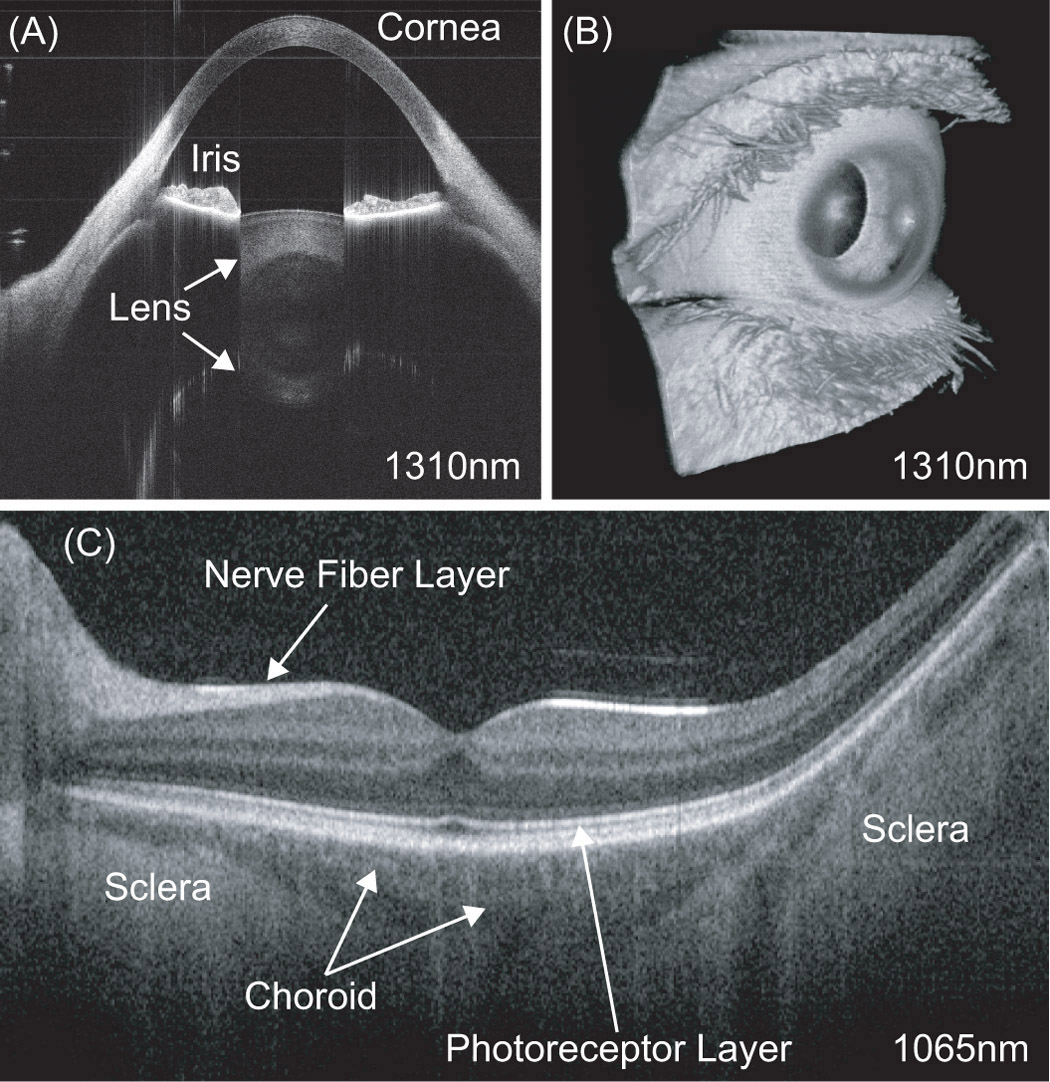 The integrated design of the VCSEL enables high volume, wafer-based production (see Figure 1). The VCSEL is optically pumped, and a low-mass, electrostatically actuated mirror enables high-speed wavelength tuning.9 Prototype 1065nm and 1310nm devices achieve 100—115nm of tuning range. The micron-scale cavity length of the VCSEL enables single-mode operation without mode hopping. Consequently, the laser's coherence length can be extremely long, which translates to a greatly extended OCT imaging range. A semiconductor booster optical amplifier increases the output power up to 35mW while maintaining the intrinsic tuning bandwidth. A single device can operate over a range of sweep lengths and at axial scan rates of 50kHz—1.2MHz by adjusting the actuator's drive waveform.10

Figure 3. 1310nm OCT cross sectional images of a human finger obtained at axial scan rates of (A) 60kHz and (B) 1MHz.

Figure 2(A) shows preliminary results imaging the anterior segment of a human eye with a 1310nm VCSEL.10 The long coherence length of the VCSEL enables a long imaging range extending from the cornea to the posterior lens surface. Through linearization of the VCSEL sweep trajectory and by using both the forward and backward sweeps, the peak A/D sampling rate for the image of a human eye is only 380 Msamples/s: see Figure 2(A). Consequently, commonly available and relatively low-cost 400—500 Msample/s A/D converters with 12—14 bits of resolution can be used to obtain a long OCT imaging range with the VCSEL source. Obtained at a 350kHz axial scan rate (approximately 10× faster than commercial systems), the retinal images show deep penetration and imaging into the choroid vasculature behind the retina: see Figure 2(B,C).

An OCT cross sectional image of a human finger demonstrates the deep penetration of 1310nm light and long coherence length of the laser, which enables the visualization of blood vessels below the skin's surface: see Figure 3(A). In an OCT image of a finger obtained at an axial scan rate of 1MHz, fingerprint ridges, sweat glands, and dermal layers can be seen with high detail and contrast, indicating the capability of OCT imaging with this new light source: see Figure 3(B).

In summary, we demonstrated a novel MEMS-tunable VCSEL light-source technology for OCT imaging. The VCSEL technology offers a novel combination of high speed, record coherence length, and flexibility in wavelength sweep trajectory. As we continue to refine and demonstrate the VCSEL in research applications, Thorlabs is commercializing the technology to be offered in either a complete OCT imaging system or as a stand-alone swept source for system integration by original equipment manufacturers.

Vijaysekhar Jayaraman is the founder and principal investigator.

Alex Cable is the founder and president.

Ireneusz Grulkowski is a postdoctoral researcher.

James G. Fujimoto is a professor and principal investigator.