Storing a short movie in an atomic vapor

Quantum information processing holds enormous promise for entirely new kinds of computing and communications, including important problems that are intractable using conventional digital technology. But realizing that promise will depend on the ability to transfer an extremely fragile quantum condition called entanglement, whereby two objects or systems are inextricably correlated, between remote locations. One way of doing this requires development of a quantum memory system capable of storing the delicate entangled states and releasing them on demand with high fidelity. Furthermore, as a practical matter, such a memory system must be capable of handling multiple combined signals in a process called multiplexing. Multiple approaches for quantum memories have been proposed and implemented using, for example, electromagnetically induced transparency or atomic frequency combs, but none of these schemes have combined temporal and spatial multiplexing.

We developed an atomic memory system that can store two separate images (in effect, two frames of a movie depicting two letters of the alphabet) for several microseconds in a vapor of rubidium (Rb) atoms, and then release them in only slightly degraded form. We believe this proof-of-principle demonstration, which requires no complicated laser-cooling or cryogenics, is the first non-solid memory to be able to store multiple images and multiplexed information in space and time. As such, it could form the basis for quantum repeaters that periodically amplify entanglement as it is distributed over substantial distances.

Our method uses a technique recently developed at the Australian National University for storing quantum states of light called gradient echo memory (GEM).1 In our experiment, the information is stored in a vapor of 85Rb atoms at 80°C confined in a cylindrical cell with a small amount of krypton as a buffer gas (see Figure 1). A linear magnetic field gradient is applied axially along the cell, causing a spatially dependent Zeeman shift in the atoms. A laser control beam, blue-detuned 1.5GHz from the Rb transition of interest, is combined with a 1.5GHz downshifted signal beam (containing the letters N and T formed by a mask and separated by about 1 microsecond) in a beam splitter. As the composite beam propagates through the vapor, the signal is mapped onto the atoms' internal states. Because the Zeeman shift along the gradient is larger than the pulse frequency bandwidth, each pulse frequency is absorbed at a different position in the cell.

Figure 1. The experimental setup for image storage in a gradient echo memory (GEM). The signal beam's spatial profile is fixed using a mask in the beam path. The mask is then imaged into the cell. A control field is overlapped with the signal using a polarizing beam splitter (PBS), and the retrieved image is recorded using a fast–gated intensified camera. A small fraction of the signal is sent to a fast photodiode for monitoring the spatially-integrated retrieved power. NPBS: Non-polarizing beam splitter. Lambda/2: Half-wave plate. f: Focal length.

Multiplexed images can be stored in sequence or simultaneously (see Figure 2). Reading out the memory is accomplished by reversing the magnetic field gradient direction. This reverses the time evolution of the signal input pulse, creating a photonic echo that exits the vapor in the direction of the original beam and is captured by a CCD camera. We found that multiplexed images can be retrieved at a spatial fidelity of 88% after a storage time of 100 nanoseconds. 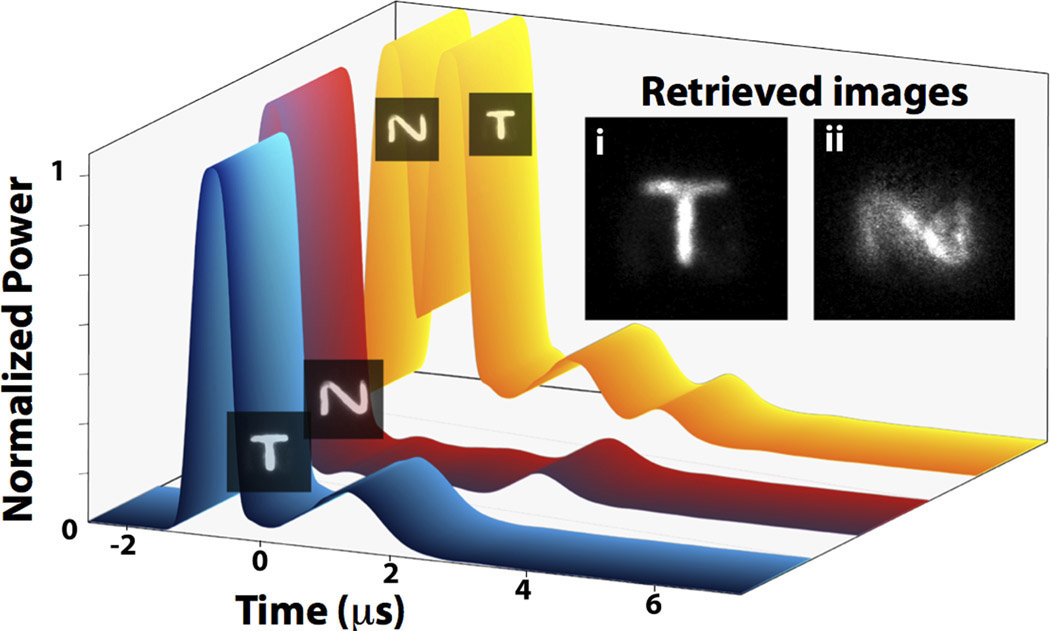 Figure 2. Storage and retrieval of two images in a GEM. The spatially-integrated intensity from the retrieval of the single letter T (blue) and N (red). The input pulse is at negative time and the retrieved pulse is at the symmetric positive time after the magnetic field gradient flip. The yellow curve shows the storage of two images. Retrieved images at times 0.3μs and 2.7μs are presented, respectively, in insets i and ii.

Analysis of retrieved images taken by the camera at a frame rate of 100ns shows that fidelity drops 1.1% per frame until an elapsed time of 1.9μs when the decline increases to 4.6% per frame. At 2.1μs, the drop suddenly rises to 8.5% per frame. After 2.4μs, the N and T images start to become indistinguishable. We determined that there is no significant crosstalk between the images, and that the reduction in the spatial fidelity of the retrieved images is due to atomic diffusion.

Similar results have been found for images stored in atomic vapor using the electromagnetically induced transparency technique.2 In that case, atomic diffusion was proposed as the principal cause of declining fidelity. Our GEM results are consistent with that conclusion and demonstrate that the expected spatial resolution of the retrieved images can be predicted from the buffer gas partial pressure and storage time. Comparisons between theoretical models and experimental data obtained from different images at different times showed good agreement, indicating that the main limitation of this technique is atomic diffusion during the storage time. We expect that this problem could be overcome by using a cold atomic sample or mitigated by storing the image's Fourier transform in the memory.

Our results demonstrate that the GEM technique can be used as a working multiplexed quantum memory.3 The next stage of the research will test the protocol with our well-characterized entangled photon source to determine the GEM's quantum properties.4, 5 Thereafter, we should be able to start investigating a quantum communication network.