Rare earth (RE)-doped oxyfluoride glass-ceramics possess optical properties of interest for telecommunications and optoelectronics. Specifically, these materials combine the transparency and mechanical and chemical resistance of aluminosilicate glasses with the low phonon energy and facile incorporation of RE ions in the fluoride crystalline phase, which enhances optical emission intensity. Oxyfluoride nano-glass-ceramics have been extensively investigated ever since Wang and Ohwaki1 developed ytterbium-erbium (Yb3+/Er3+)-doped lead fluoride nanocrystals within an oxide glassy matrix. Studies have been focused on exploring new crystalline phases and adding different RE ions.2–7 A complete overview of this research field is available elsewhere.8 In medicine, sodium yttrium fluoride (NaYF4) nanoparticles doped with Yb3+/Er3+ have been reported as analytes (molecules of interest) for detecting DNA.9, 10 Zhang and Huang11 reviewed down-conversion applications of IR quantum cutting glass-ceramics containing a range of fluoride-based nanocrystals, including materials used for solar energy. Richards12 described the advantages of applying up-conversion to photovoltaics, in other words, achieving photon energies that can be more readily absorbed by silicon (Si) solar cells.

Lanthanum fluoride (LaF3) is a commonly used fluoride for hosting RE ions in the crystalline phase. Moreover, because to date NaYF4 is known to be one of the most efficient hosts for green and blue up-conversion (e.g., two IR photons giving rise to one visible photon),13, 14 RE-doped fluorides of the type AREF4 (where ‘A’ is an alkali metal) have become the focus of recent attention.15, 16

We chose to study nanocrystallization in four different glasses in the oxyfluoride system SiO2-Al2O3-Na2O-K2O-LaF3/YF3 (where Al is aluminum, and K potassium). Heat treatments at temperatures above the glass-transition temperature induce devitrification of different crystalline phases, depending on the composition:17 LaF3, NaLaF4, KLaF4, and NaYF4. Crystalline fraction and crystal size depend on the time and temperature of thermal treatment.

We carried out thermal and structural characterization of samples using several techniques, including viscosity, dilatometry, x-ray and neutron diffraction, quantitative Rietveld refinement, transmission electron microscopy, differential scanning calorimetry, nuclear magnetic resonance, and extended x-ray absorption fine structure. The crystallization mechanism is similar in all the LaF3-containing glasses we investigated. The parent glass was initially phase-separated, showing LaF-enriched droplets in the oxide glassy matrix. During heat treatment, formation of a crystal-glass interface enriched in SiO2 occurs (see Figure 1), which acts as a diffusional barrier through the increase of viscosity in this region. Consequently, the crystal size remains in the nanometer range.18–21 This mechanism has been confirmed by scanning transmission electron microscopy and electron energy loss spectroscopy (see Figure 1). 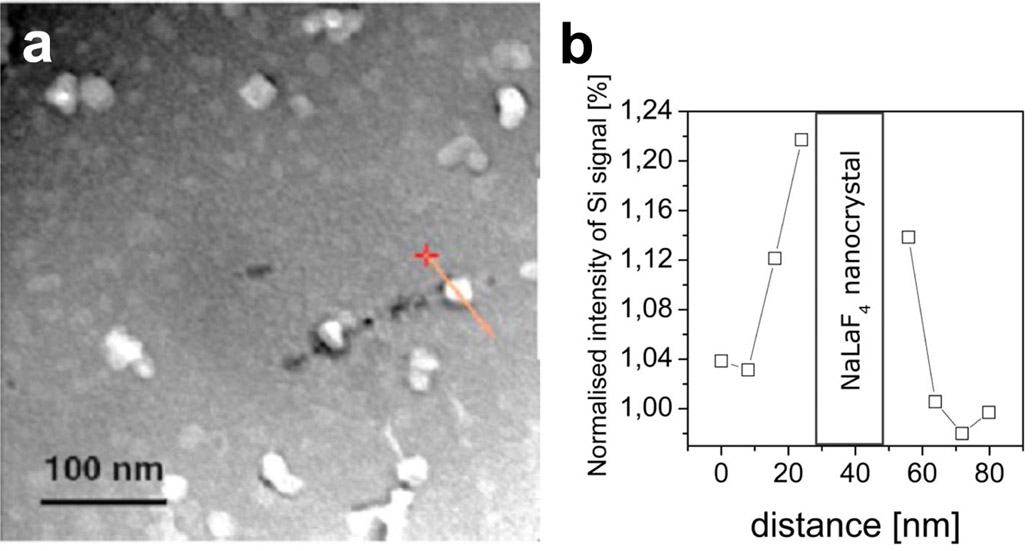 Figure 1. (a) Dark-field scanning transmission electron microscopy image of 70Si7La glass-ceramic obtained at 520°C for 90h, with the spot analysis location indicated. (b) Normalized silicon (Si) intensity along the trace of the line scan indicated in (a). NaLaF4: Sodium lanthanum fluoride.

Figure 2. (a) Up-conversion spectra of 1mol% thulium oxide (Tm2O3)-doped 55Si10La glass and glass-ceramic (620°C, 40h) under excitation at 790nm employing a pumping power of 290mW. The inset shows emission spectra under 488nm excitation. (b) Tm3+ energy-level diagram showing the up-conversion mechanism. The labels at the peaks in the inset and to the far right in (b) represent transition energies. λ: Wavelength. a.u.: Arbitrary units. MPR: Multiphonon relaxation. CR: Cross-relaxation.

We also analyzed the effect on nanocrystallization of adding RE ions (Tm3+, Eu3+, Yb3+, Er3+). In particular, the optical characterization of RE-doped glass and glass-ceramics focused on confirming the distribution of RE ions between the glassy matrix and crystals, and on the up-conversion emission processes.

Heat treatment of the glass 55Si10La (55SiO2-20Al2O3-15Na2O-10LaF3 mol%) doped with 1mol% Tm2O3 induced crystallization of LaF3. We observed a homogeneous distribution of ∼19nm LaF3 nanocrystals after 40h at 620°C. When we excited glass and glass-ceramic samples with a pulsed laser at 790nm, we observed a blue emission. Figure 2(a) shows up-conversion spectra consisting of two contributions at 447 and 477nm, corresponding to 1D2 → 3F4 and 1G4 → 3H6 transitions, respectively. These transitions exhibit slightly higher intensity in glass-ceramic than in the glass, suggesting a more efficient process in glass-ceramic. Moreover, under excitation at 488nm, the emission spectra of the glass and glass-ceramic show the presence of sharp and better-resolved extra peaks located at 607 and 720nm in the glass-ceramic sample—see Figure 2(a), inset—which we attribute to fluoride crystalline environments of Tm3+ and which provide evidence for the formation of Tm3+:LaF3 nanocrystals. We measured the variation of the emission intensities as a function of the laser pumping power in both materials, and found evidence of a two-photon process: see Figure 2(b).

Heat treatment of the glass 70Si7La (70SiO2-7Al2O3-8Na2O-8K2O-7LaF3 mol%) doped with 0.7mol% Tm2O3 provoked crystallization of NaLaF4, with crystal sizes ranging between 12 and 16nm.22 Figure 3(a) shows photoluminescence emission measurements under 488nm excitation. Glass-ceramics exhibit additional and narrower bands compared with the base glass, indicating the partial location of Tm3+ in fluoride crystalline surroundings. Figure 3(b) shows Tm3+ up-conversion spectra from excitation at 790nm. Blue emission intensity is much higher in glass-ceramic compared with glass. We selected this composition to produce planar waveguides that are now in development in our group using ionic exchange with silver.

We have presented the general principles of nanocrystallization in oxyfluoride glasses, with special attention to the crystallization of fluoride and double-fluoride phases. Collaboration with other institutions has allowed the optical characterization of these materials, which suggests a promising future for them, for example, in optics and photovoltaics. Finding the best material requires that several factors be improved: crystallization of the appropriate fluoride crystal (including new phases such as sodium lutetium fluoride and lithium lutetium fluoride), a high crystalline fraction, and maximum incorporation of the RE ion into the crystalline structure, among others. We will devote our next steps to this end.

Alicia Durán is research professor and head of the Glass Department. Her research focuses on glasses, glass-ceramics, and sol-gel materials. She has published more than 180 papers in SCI journals. She is on the steering committee of the International Commission on Glass, associate editor of the International Journal of Applied Glass Science, and editor of the European Journal of Glass Science and Technology and the Journal of Sol-Gel Science and Technology.

M. J. Pascual is a tenured researcher. Her work focuses on glass, glass-ceramic, and crystallization processes. She has published 50 papers in SCI journals and is a council member of the International Commission on Glass, for which she participates in the technical committee TC7 Crystallization in Glasses.