A variety of applications, from precision optical clocks (used for timekeeping) to broadband molecular spectroscopy (used for trace gas detection) have been enabled by the use of optical frequency combs. These devices allow precise frequency determination by providing a ‘comb’ of sharp optical spectral lines referenced to radio-frequency sources.1, 2 The comb is generated by a continuous train of ultrashort laser pulses in the time domain: see Figure 1(a). The invention of the optical frequency comb at the beginning of this century revolutionized visible and near-IR spectroscopy and frequency metrology. Extending this tool into the extreme UV (XUV, light with wavelengths less than 100nm) would enable applications ranging from strong field and molecular physics studies to ultrahigh precision spectroscopy in highly charged ions and nuclear isomer transitions. However, the XUV is a challenging part of the electromagnetic spectrum. XUV spectroscopy has trailed far behind that in the visible because of a lack of precise laser sources. 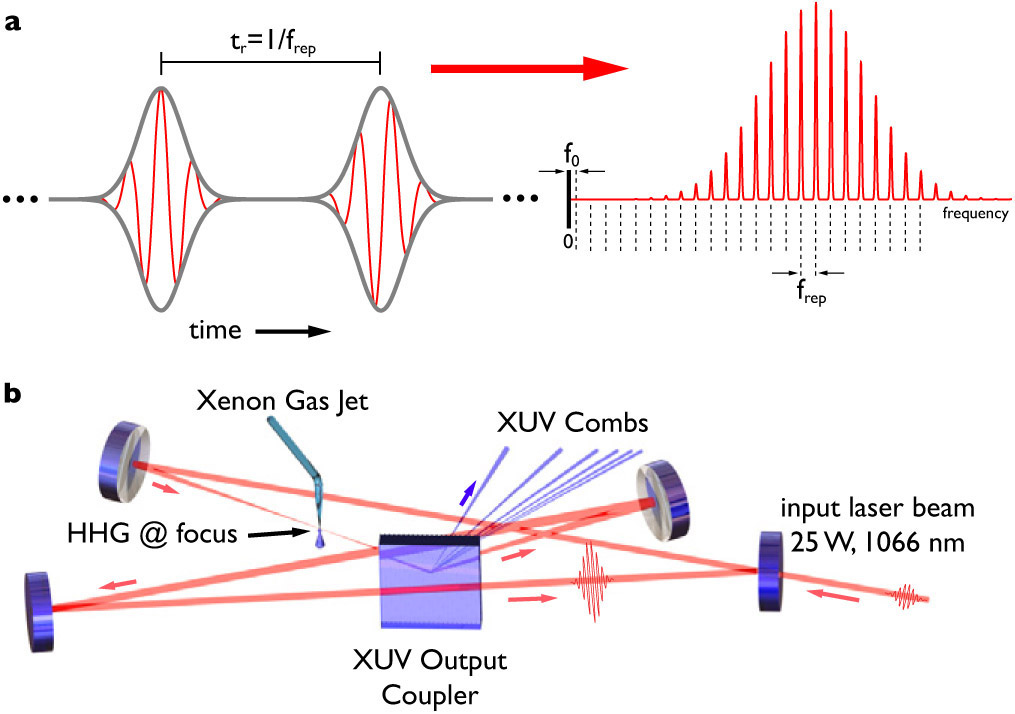 Figure 1. (a) A train of stabilized laser pulses generates a comb of sharp spectral lines defined by two radio frequencies: the comb spacing (frep) and an offset (f0). (b) An IR frequency comb is passively amplified in an optical cavity. Xenon gas is injected at the intracavity focus leading to high harmonic generation (HHG) of extreme ultraviolet (XUV) light. An output coupler acts like a diffraction grating and separates the XUV harmonics.

A standard technique for generating coherent radiation at these wavelengths is high harmonic generation (HHG). HHG uses an intense optical pulse focused into a gaseous target to generate multiples (high harmonics) of the fundamental optical frequency.3 However, frequency comb lasers do not have the necessary intensity to drive this extremely nonlinear process, which requires pulse peak intensities exceeding 1013Waaacm2. The solution is to passively amplify the laser output in an optical enhancement cavity and generate the XUV light at the intracavity focus, where the light is most intense.

In this approach, the output of the laser is coupled into an optical enhancement cavity, which consists of several highly reflective mirrors. The optical path length within the cavity is set precisely, such that when the intracavity pulse returns to the first input mirror, the next laser pulse in the pulse train is coherently added to it: see Figure 1(b). This leads to an amplification factor of 200--1000, depending on the mirror reflectivities. This technique was first demonstrated in 2005,4, 5 but was limited by available laser power and XUV output couplers. As a result, the measured XUV power per harmonic was less than 1nW, and the comb structure of only the third harmonic at 266nm was verified.

In order to overcome these limitations, we have made several improvements. We used the highest average power frequency comb based on ytterbium fiber technology with 80W of average power and pulse duration of 120fs.6 Moreover, we developed a novel XUV output coupler, which acts as a diffraction grating for the XUV light and minimizes pulse distortions from nonlinearities.7 Finally, through detailed numerical simulations and experimental verification,8 we optimized the cavity parameters that minimize the deleterious effects of the plasma introduced during the HHG process.9

With these improvements, we increased the outcoupled XUV powers by more than four orders of magnitude. We measured HHG spectra by recording an image of the dispersed harmonics on a calibrated sodium salicylate coated plate, which fluoresces at 420nm when irradiated with XUV light: see Figure 2(a) and (b). The measured average outcoupled powers are in excess of 20μW per harmonic up to the 19th harmonic at 56nm. These powers are among the highest harmonic yields reported.10, 11 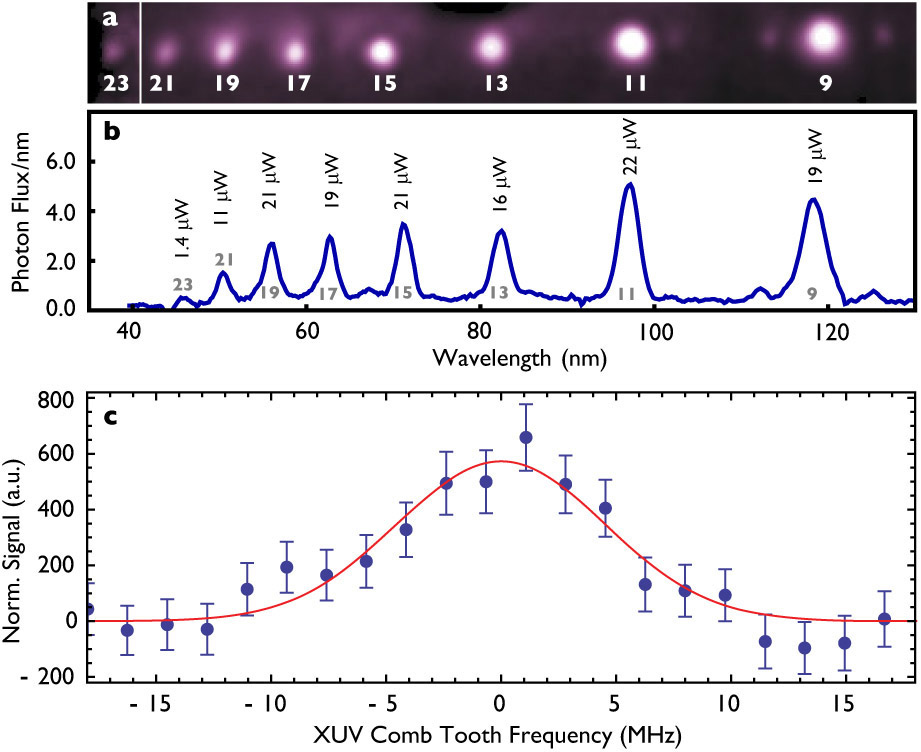 Figure 2. (a) Image of the dispersed harmonics incident on a plate coated with sodium salicylate. (b) HHG spectrum obtained by vertical integration of the image. (c) 82nm fluorescence signal as a single XUV comb tooth is scanned across the argon transition frequency. a.u.: Arbitrary units.

The increased harmonic power allowed us to demonstrate the comb structure of the XUV harmonics by spectrally resolving electric dipole transitions at 82nm (13th harmonic) in argon and at 63nm (17th harmonic) in neon.10 A scan of a single XUV comb tooth across the argon transition is shown in Figure 2(c). The observed transition width of 10MHz is consistent with the transverse Doppler width of the atomic beam, which propagates perpendicular to the XUV beam. This provides a stringent upper bound for the XUV comb tooth linewidth.

We have successfully shown the ability to produce a practical XUV frequency comb from an IR laser. These developments bring many promising applications---including a search for variability in the fine-structure constant---within reach. Our next step will be to study the relative frequency fluctuations between two intracavity HHG sources pumped by the same laser. This will isolate the HHG contribution to the laser phase noise and allow us to infer the ultimate achievable linewidth using this technique.

This research is funded by the Defense Advanced Research Projects Agency, the Air Force Office of Scientific Research, the National Institute of Standards and Technology, and the National Science Foundation. A. Cingöz and T. K. Allison are National Research Council postdoctoral fellows. Axel Ruehl acknowledges funding from the Alexander von Humboldt Foundation (Germany).