The importance of light trapping in thin-film solar cells

For solar energy to provide a significant contribution to the energy needs of our society, the development of more efficient and less expensive photovoltaic cells is critical. Producing energy on a global scale—the so-called terawatt challenge—makes it essential to use a minimum amount of rare or costly photoactive elements.

Photovoltaic cells based on thin semiconductor films are well placed to meet these criteria and have the potential to replace the dominant photovoltaic technology based on expensive bulk silicon wafers. To do this, their efficiency needs to be increased beyond current values, and the required thickness of the semiconductor film should be minimized as much as possible. However, ultra-thin semiconductor layers are less effective at absorbing sunlight, unless smart light-trapping techniques can be designed and implemented. Such techniques aim at increasing the optical path of light in the semiconductor, which enhances the absorption efficiency for the same material thickness.

The ultimate limit to light trapping in thick semiconductor layers was determined by Yablonovitch and Cody1, 2 for the case of weak absorption, and was later generalized by Green3 to the case of arbitrary absorption. It is based on the concept of a Lambertian scatterer, i.e., a rough interface that randomizes the direction of propagation of incoming light when it enters the sample. This limit to light trapping is called the Lambertian limit. Such treatments assume a ray-optics approach and are rigorously valid only when the film thickness is much larger than the wavelength of visible light, which amounts to a few hundreds of nanometers. When the film thickness is less than this, a wave-optics approach becomes necessary and the light-trapping limit to absorption is not known. While it is generally agreed that wavelength-scale or nanophotonic structures should be employed, the optimal geometry for such structures is yet to be determined. A point of debate is whether ordered structures, which can be fabricated by top-down techniques like lithography and etching, can perform better than disordered structures made by depositing the semiconductor layer on an oxide surface with natural roughness. The latter disordered structures are often employed in thin-film photovoltaic cells. 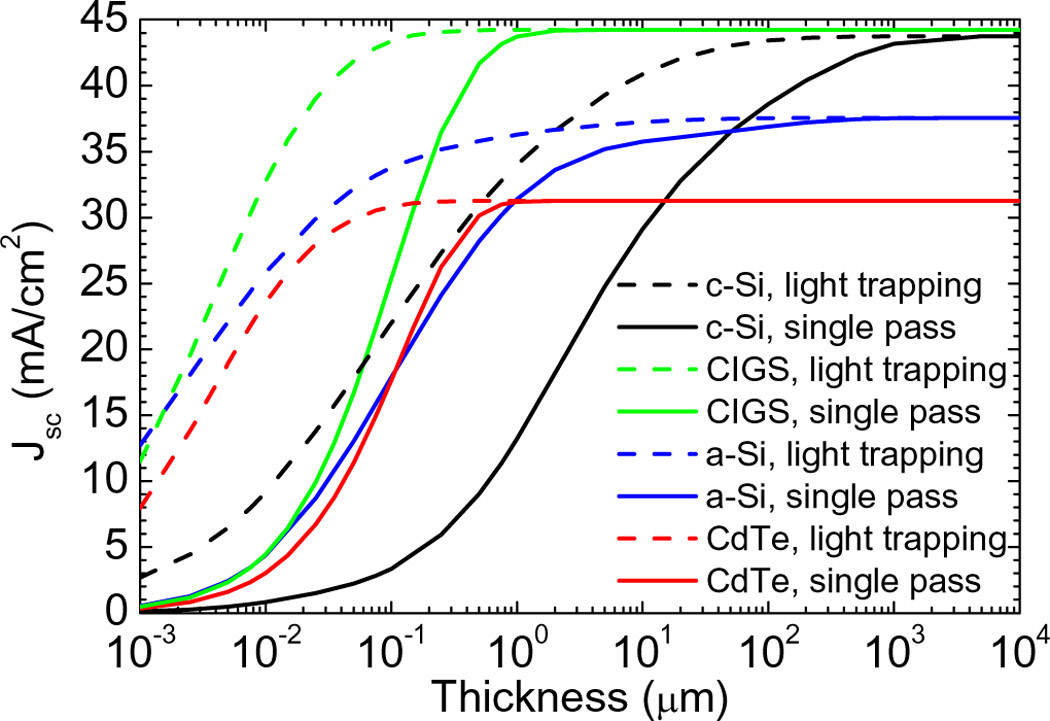 In our recent work4 we first examined the Lambertian limit to the short-circuit current in solar cells made of diverse semiconductors as a function of layer thickness (see Figure 1). We concluded that—at least in principle—1μm of crystalline silicon (c-Si) or 100nm of direct bandgap materials such as amorphous silicon (a-Si), cadmium telluride (CdTe), or copper indium gallium diselenide (CIGS) could be adequate to realize thin-film photovoltaic cells with integrated absorbance close to the maximum value. We then focused on thin-film solar cells made of c-Si or a-Si and calculated the effect of introducing 1D or 2D photonic crystals. We determined the short-circuit current for various geometrical parameters by means of rigorous coupled-wave analysis, and we optimized the photonic crystal structure as a function of the silicon layer thickness. 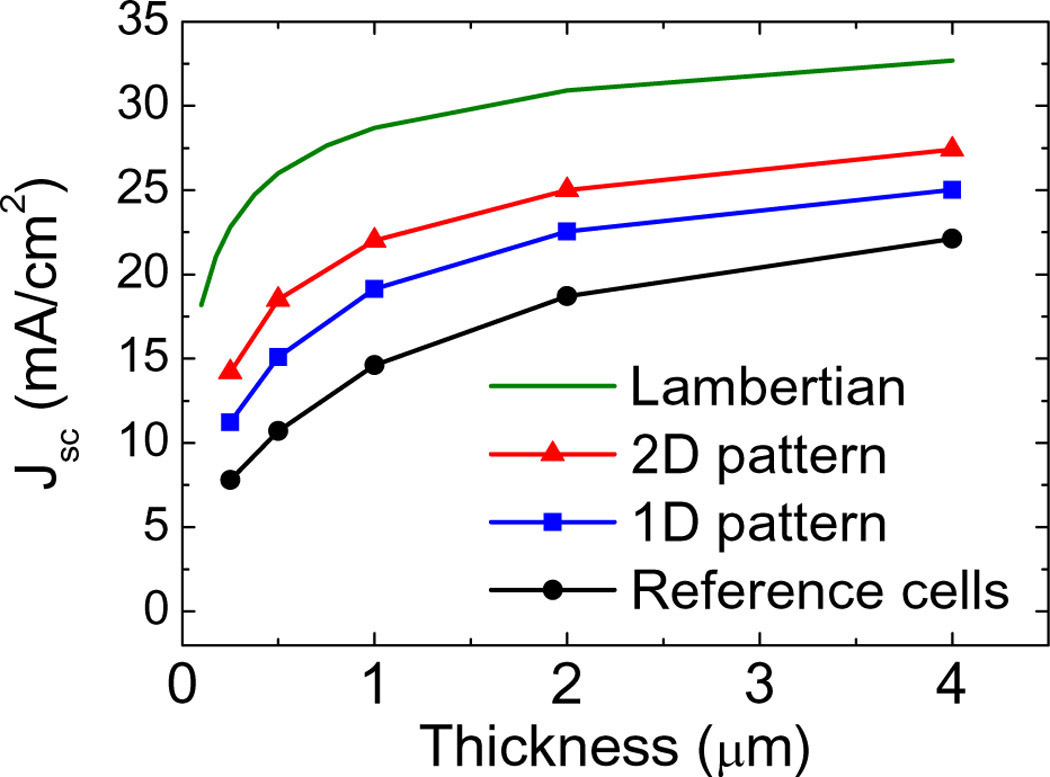 Figure 2. Jsc for c-Si photovoltaic cells patterned with optimized 1D and square 2D lattices, as a function of initial thickness of the c-Si slab.

Figure 2 summarizes results for c-Si: they show that both 1D and 2D photonic crystals yield a substantial increase in absorption, especially for the lower thicknesses, and that 2D structures perform better than 1D ones. The increase in absorption results from improved light trapping at lower photon energies (longer wavelengths) and from improved anti-reflection properties at higher photon energies (shorter wavelengths). However, the results also indicate that the short-circuit current of the optimal structures is about half-way between that calculated for the unpatterned layer and that expected in the Lambertian limit.

The open question, which is intensively being investigated, is how to design structures that approach the Lambertian limit more closely. An additional requirement is that the desired structures should be amenable to fabrication, with processes that can be transferred to large-scale production and at low cost. We are continuing the research by investigating other kinds of ordered structures as well as disordered ones (e.g., rough interfaces), and also combinations of both. Another crucial issue is how to implement the designed structures in actual solar cells, and to study their effect on electronic transport. It may turn out that the presence of patterned surfaces increases the surface recombination of photogenerated electrons and holes, thus degrading electronic transport and (perhaps partially) spoiling the advantage of having increased absorption. Simultaneous optimization of optical and electronic behavior at the same time is necessary.

The quest for more efficient, less-expensive ways of converting sunlight to electricity will remain a hot research theme in the next years. In this context, the vision of ultra-thin-film solar cells with optimized light harvesting and electronic transport at the nanoscale, resulting in cheap and efficient photovoltaic conversion amenable for large-scale production, may eventually become a reality.

This work was supported by Fondazione Cariplo under project 2010-0523 Nanophotonics for Thin-Film Photovoltaics, and by the European Commission through the Marie Curie Action FP7-PEOPLE-2010-ITN project 264687 PROPHET.

Angelo Bozzola is a PhD candidate. His research deals with photovoltaic cells based on thin-film semiconductors and on fluorescent concentrators.

Marco Liscidini is a researcher. His research deals with linear and nonlinear optical effects in various photonic systems, including photonic crystals, waveguides, nanocavities, and photovoltaic cells.