Thermoelectrical control of magnetic states on the nanoscale

Discovery of giant magnetoresistance1,2 by Albert Fert and Peter Grünberg in 1988 initiated a new technological concept: spin-based electronics, or spintronics. The challenge of manipulating magnetic states on the nanometer scale is central to this new branch of physics. The spin torque (ST) effect—which modulates the magnetization direction of a magnetic particle under an injection of spin-polarized electrons—is one possible solution that has since become a subject of intense study.3–5

Large current densities needed to achieve sufficient ST are accompanied by Joule heating, imposing a limit on the applicability of the ST effect. However, the fact that such heating can be precisely controlled by applying voltage opens up new possibilities for thermoelectric manipulation of the magnetic state, as we have predicted and experimentally observed.6–8 This novel control method works for a broad range of scenarios, including one in which the ST effect is absent. 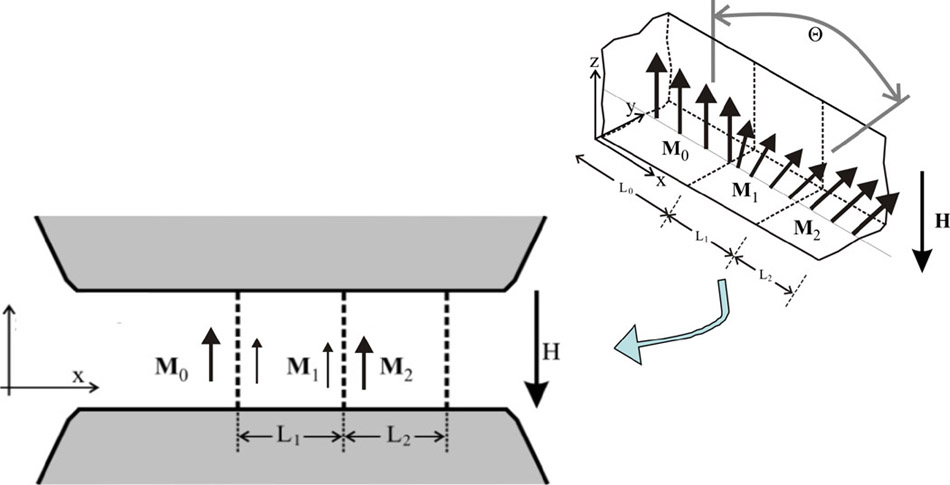 Figure 1. Orientation of the magnetic moments M (shown with short arrows) in a stack of three ferromagnetic layers (0, 1, 2) of separation L1 (between layers 0 and 1) and L2 (1 and 2). The magnetic field H is shown with a long arrow. The magnetization in layer 0 is fixed. Θ: Tilt angle.

Figure 2. Dependence of the tilt angle Θon temperature T. Tc(1 )is the Curie temperature of layer 1 and Tc(or)the critical temperature.

Figure 3. The dependence of the resistance R on (a) current J (experimental) and (b) on the bath temperature T (numerical calculations). 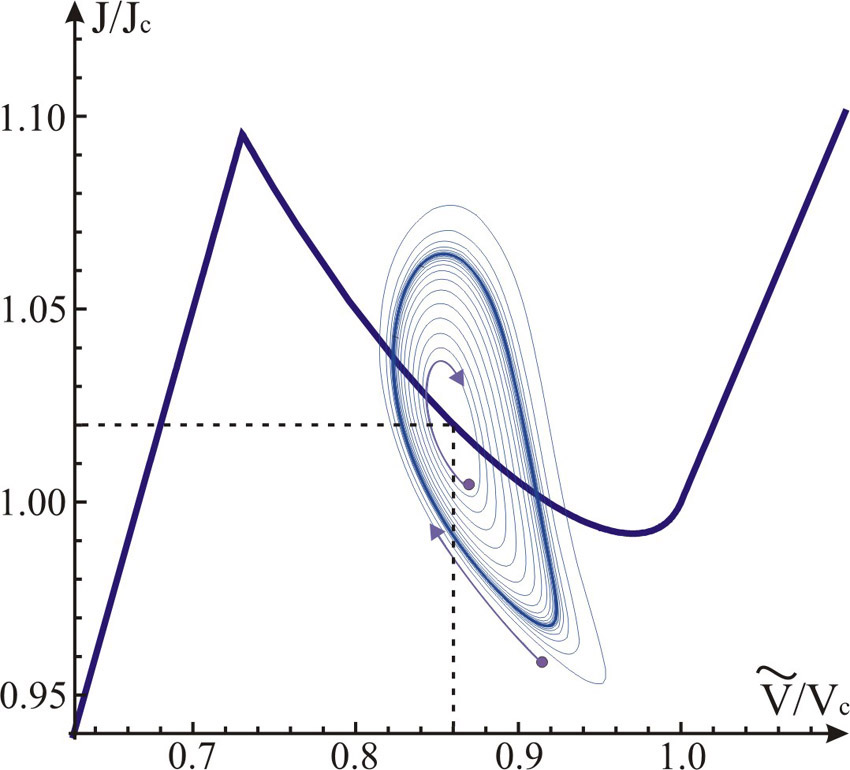 Figure 4. The steady-state current voltage characteristic of the stack (thick dark blue line) and spontaneous oscillations of the current J(t) and the voltage drop over the stack ~V(t) (here t is time). J(t) and ~V(t) develop from the initial state toward the limiting cycle (thick blue closed line) along which they execute a periodic motion. At J=Jcand ~V=Vc, the stack is Joule heated to the temperature T=Tc(1 ).

Figure 2 shows the temperature dependence of tilt angle θ on θ(T). This allows the control of charge transport through the stack due to the dependence of magnetoresistance R(θ) on tilt angle θ either by changing the temperature or by Joule heating the stack with current J—in this case T=T(J)—as shown in Figure 3. In particular, the current-voltage characteristic (IVC) can be either N-shaped or S-shaped.7, 9 If a stack with an N-shaped IVC is incorporated in a circuit having large enough inductance Λ>Λcr≈10−8÷10−7 H and biased by a dc voltage V, temporal voltage oscillations spontaneously arise across the stack as ~V(t), J(t), θ(t), and T(t). Figure 4 shows how this occurs. The frequency of these oscillations can be controlled by a change of Λ from essentially dc to gigahertz. For the S-shaped IVC the spontaneous oscillations arise if the capacitance in the circuit C>Ccr≈10−11÷10−10F (here, C is capacitance, Ccr is critical capacitance, and F is farad.)

Our investigations also show that space-periodic magnetic structures can be electrically induced in the system if the layers are long enough.10 Most of the current research on magnetic multilayer materials and their device applications relies on conventional equilibrium electron transport. We next plan to use electrically controlled spin-polarized currents in highly non-equilibrium regimes with respect to energy and temperature, hence ‘spin-thermo-electronics’ (STELE). Another issue is the large amount of heat generated in nanoscale devices, which today is one of the most fundamental obstacles to device miniaturization. To overcome this, we plan to turn the problem around by instead using electrically controlled local heating of magnetic nanostructures to achieve fundamentally new functionality, with potential applications in new types of spin valves, oscillators, and memory elements.