The solar corona represents the physical link between the Sun and the Earth with its human life, because it stretches without discontinuity into the heliosphere and strongly affects its physical parameters. Observation of the solar corona is challenging because of the intrinsic weakness of the coronal radiation, which is 10−6 to 10−8 times fainter than the nearby bright photosphere. Intensive observation of the solar corona requires a coronagraph, that is, a telescope equipped with a system for occulting the light from the solar disk.1, 2

The Multi-Element Telescope for Imaging and Spectroscopy (METIS), selected to fly aboard the Solar Orbiter ESA/NASA mission,3 is a coronagraph/spectrometer designed to perform imaging and spectroscopy of the solar corona by means of an integrated instrument suite located on a single optical bench and sharing the same aperture on the satellite heat shield. Like every coronagraph, METIS requires highly effective stray light suppression. The history of coronagraphs4–6 teaches us that in the design process, particular attention must be given to optimizing the occulter.

The METIS occulting system is of particular interest because of its innovative concept. The Solar Orbiter will observe the Sun from a unique point of view by reaching a perihelion of 0.28 astronomical units (AU) and orbiting up to 30° out of the ecliptic. To meet the strict thermal requirements of the Solar Orbiter, the METIS optical design has been optimized by moving the entrance pupil to the level of the external occulter on the spacecraft's thermal shield, thus reducing the size of the external aperture (see Figure 1). The scheme is based on an inverted external occulter (IEO) consisting of a circular aperture on the Solar Orbiter thermal shield. A spherical mirror, M0, rejects light from the solar disk back through the IEO. The telescope's two mirrors, M1 and M2, are in an on-axis Gregorian configuration, thus giving access to the primary focal plane for the placement of the internal occulter (IO). The IO blocks the light diffracted by the edge of the IEO and specularly reflected by M1. 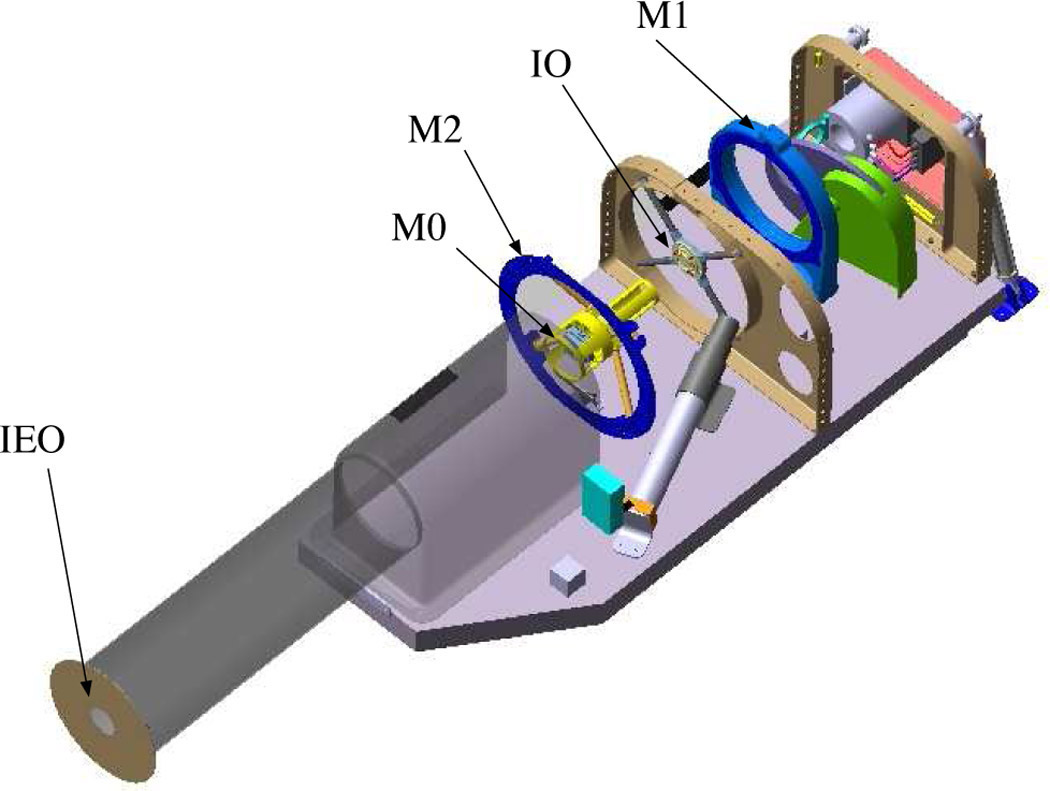 The innovative design of the METIS occulter and the peculiarities of the Solar Orbiter necessitate a new approach to occulter optimization. An inverted frustum of a right cone is the shape chosen to optimize the IEO. Figure 2(a) shows a sketch of the inverted cone, and Figure 2(b) illustrates its key geometrical parameters. We developed a prototype, the Breadboard for the Occulting Assembly (BOA), to simulate the METIS occulting system and to compare the performance of several configurations of the inverted cone in terms of stray light suppression: see Figure 2(c). 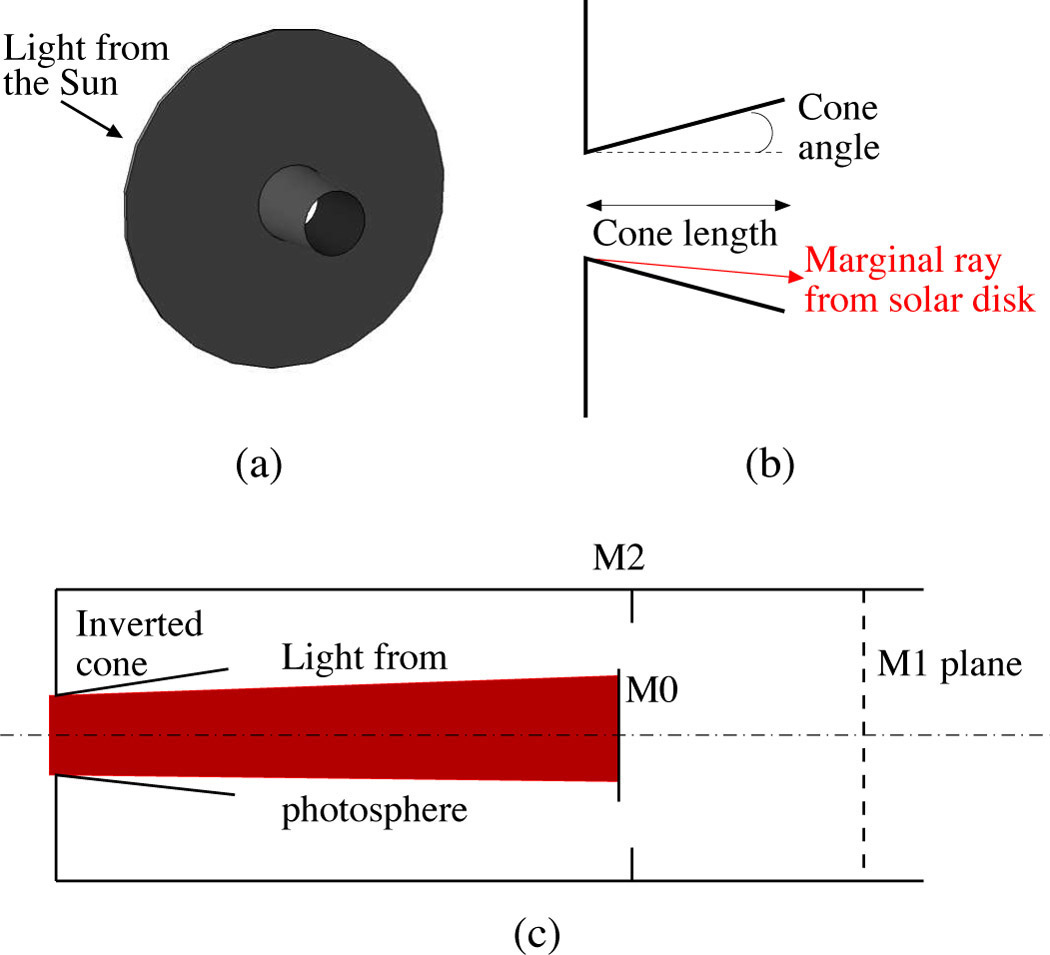 We made a preliminary set of measurements using the solar simulator at the Laboratory of Astrophysics of Marseille in France (see Figure 3). We performed tests assuming a fixed dimension of the Sun (32 arcmin diameter, corresponding to a heliocentric distance of 1AU) and with a Vel-Black absorbent coating (from Energy Science Laboratories, Inc.) on M0 instead of a mirror. The detector is a photodiode baffled with a pinhole and is moved on a motorized translation stage along the diameter of the BOA boom in the M1 plane (the diffraction pattern has circular symmetry). 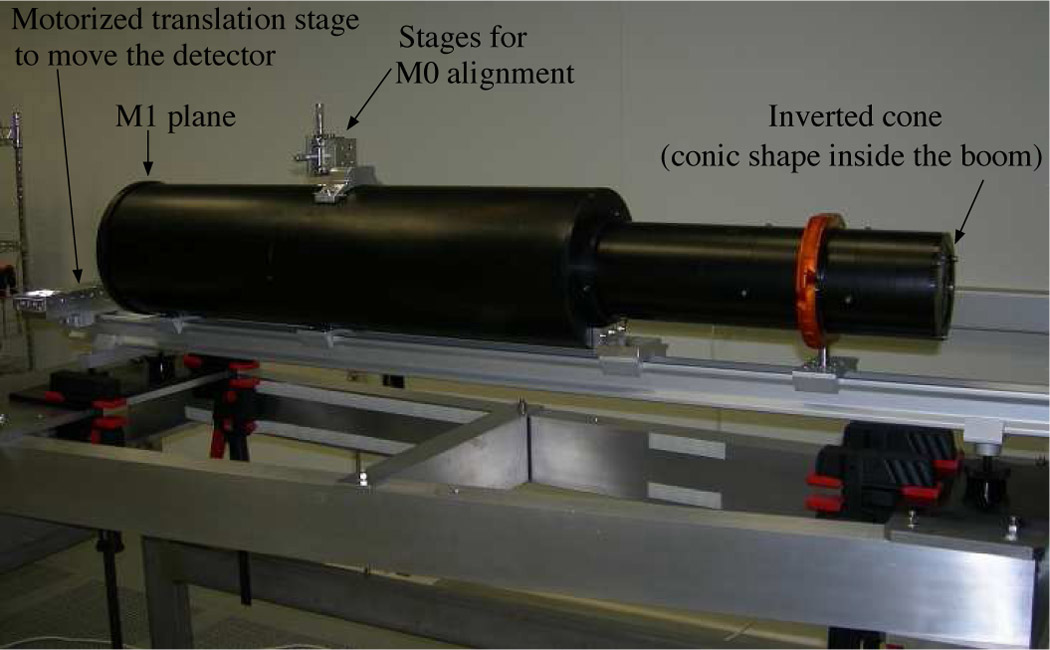 Figure 3. Picture of the BOA in front of the solar simulator at the Laboratory of Astrophysics of Marseille.

A short video available online7 shows a stray light scan as seen by a commercial video camera positioned on the translation stage (replacing the photodiode). Although the camera has an objective lens system that forms an image (whereas the photodiode is only a photometer), the video is intriguing because it simulates the human eye's point of view.

We compared several inverted cone geometries having different lengths and angles, as defined in Figure 2(b). The results are shown in Figures 4 and 5, where the simple circular aperture of the IEO is used as a fixed reference. All measurements were normalized to the unobstructed source intensity. The plots show the normalized flux as a function of the photodiode's position along M1's diameter. These preliminary results already show that the conic shape of the occulter contributes greatly to stray light suppression. Although the cone length has a negligible impact on the performances, the cone angle is clearly a key parameter. 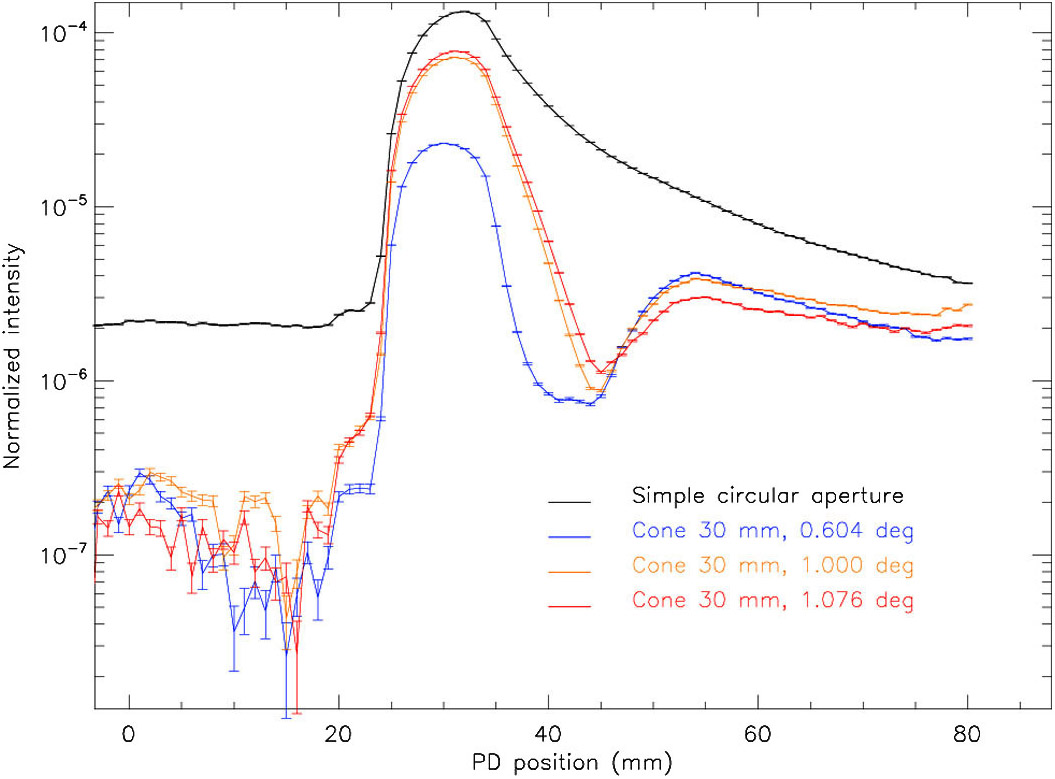 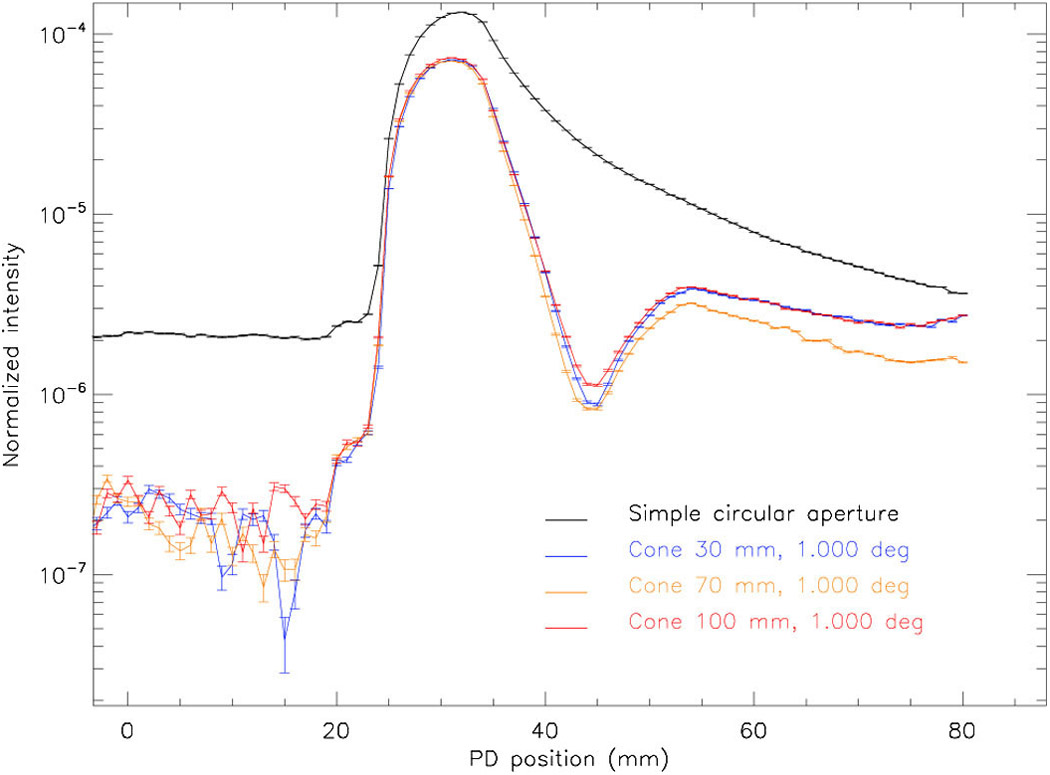 Figure 5. Comparison of stray light suppression performances of cones having a fixed angle (1.0°) and different lengths.

In summary, we examined several possible geometries for an external occulter for use on an innovative space-borne coronagraph. Measurements using a prototype at a solar simulator demonstrated that a conic occulter effectively suppresses stray light. The angle of the cone is crucial to the occulter's performance, although its length has a negligible effect. As a next step, we plan to replace the Vel-black coating on M0 in the prototype with a mirror and to replicate the entire set of measurements with different solar disk dimensions and more extended cone geometries.

The authors are grateful to Jose Garcia and Gilles Arthaud for their technical and mechanical support.

Federico Landini graduated in physics in 2002 at the University of Florence and obtained his PhD in astronomy in 2006. He contributed to the occulter study for GOES-R and has been responsible for occulter optimization for HERSCHEL/SCORE, PROBA3/ASPIICS, and Solar Orbiter/METIS.