Integrated circuit performance will reach a ceiling within five to ten years no matter how fast transistors become.1 One factor that will affect processor circuit performance is the copper interconnects that carry electrical data on and between chips. As copper wires become narrower along with shrinking circuit features, their resistance increases, restricting data flow and drastically increasing power consumption. Silicon-based optical links are a promising solution for high-speed and low-power-consumption data communication.2

Optical modulators, which convert electrical data into the optical domain, are an indispensable component of high-speed optical links. Most silicon-compatible modulators rely on injecting or removing free-charge carriers, which changes silicon's refractive index. This changes the phase of the optical wave propagating in the material, which is converted into an intensity change via a Mach-Zehnder interferometer.3 Carrier injection is the most efficient way to obtain index change but does not give the 10–40Gb/s speed required for applications. Carrier depletion, on the other hand, gives impressive high-speed performance but with relatively low modulation efficiency.

We are working towards developing a multiple quantum well modulator using high-germanium-content silicon-germanium (SiGe) compounds: group IV materials that are CMOS-compatible. Germanium (Ge) is an indirect bandgap material with a unique band structure. It can be viewed as a quasi-direct bandgap material because the indirect transition energy is 0.66eV, and the direct one is only 0.8eV at room temperature. This relatively small difference in energy leads to a material with strong direct band absorption and a sharp absorption edge, making it a promising EA material.

In Ge/SiGe quantum well structures, where germanium is sandwiched between SiGe barriers, quantum confinement leads to an even sharper absorption edge. This results in a large variation of absorption coefficients with a relatively small applied electric field. The EA effect in quantum well structures is widely known as the quantum-confined Stark effect.4, 5 This approach could enable a monolithic integration of high-performance photonic devices on CMOS chips, where SiGe is already used to improve silicon's electrical properties.

Ge/SiGe MQW modulators reported so far have shown up to 7Gb/s modulation speeds.6 One main issue is the large crystal lattice difference between germanium and silicon. However, good quality germanium MQWs can be grown on a SiGe relaxed buffer.

We grew Ge/SiGe MQWs by low-energy plasma-enhanced chemical vapor deposition.7 On a silicon substrate, we deposited a Si1−yGey graded buffer with y linearly increasing from 0 to 0.9, followed by a 2μm relaxed Si0.1Ge0.9 layer. A boron-doped Si0.1Ge0.9 layer was grown to serve as a p-type contact. The MQW consists of twenty 10nm germanium quantum wells sandwiched between 15nm Si0.15Ge0.85 barriers. Finally, we added a phosphorus-doped Si0.1Ge0.9 layer to serve as an n-type contact. We fabricated a 3μm-wide, 90μm-long Ge/SiGe MQW p-i-n diode to investigate the modulation performance of the quantum wells.8, 9 Figure 1 shows the schematic view of the fabricated device. 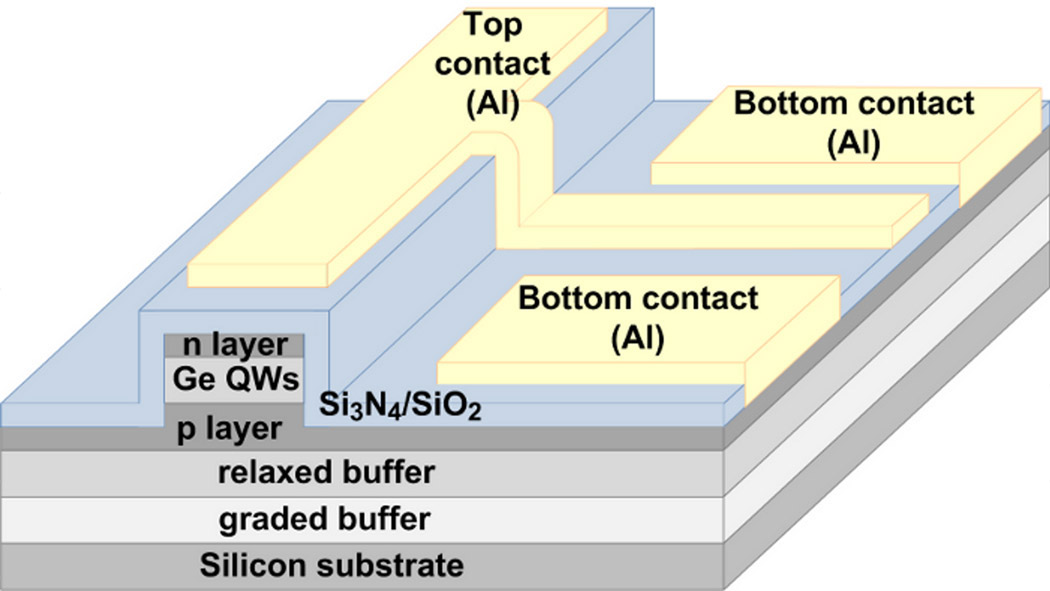 Transmission measurements on the waveguides at several reverse bias voltages at wavelengths of 1400–1460nm show a red shift of the absorption spectra—a characteristic of the quantum-confined Stark effect—when the voltage increases: see Figure 2(a). The extinction ratio was higher than 6dB for a wide spectral range. The maximum ratio was around 10dB between 1433–1442nm for a 5V reverse bias and between 1433–1437nm at 4V. We show that with a voltage swing of 1V between 3–4V and of 2V between 3–5V, respectively, an extinction ratio higher than 6dB can be obtained from 1433–1437nm and from 1433–1444nm: see Figure 2(b). The absorption loss at 0V was around 5.5–12dB at the working wavelength. We expect to decrease this by optimizing the light confinement in the MQW region.8

Figure 2. (a) Absorption spectra of the 3μm×90μm long Ge/SiGe MQW waveguide as a function of wavelength and photon energy for different reverse bias voltages. (b) Extinction ratio for a voltage swing of 1V between 3–4V and of 2V between 3–5V.

We evaluated the frequency response of the modulator using an opto-radiofrequency vector network analyzer at 1448nm, where the signal was larger. We obtained a normalized optical response with 3dB cut-off frequency of 23GHz at a reverse bias of −4.5V: see Figure 3. We also deduced the junction capacitance of 62fF from the so-called scattering parameter measurement. The energy consumption per bit of this EA modulator is estimated to be 108fJ/bit for a voltage swing of 1V between 3–4V biases. 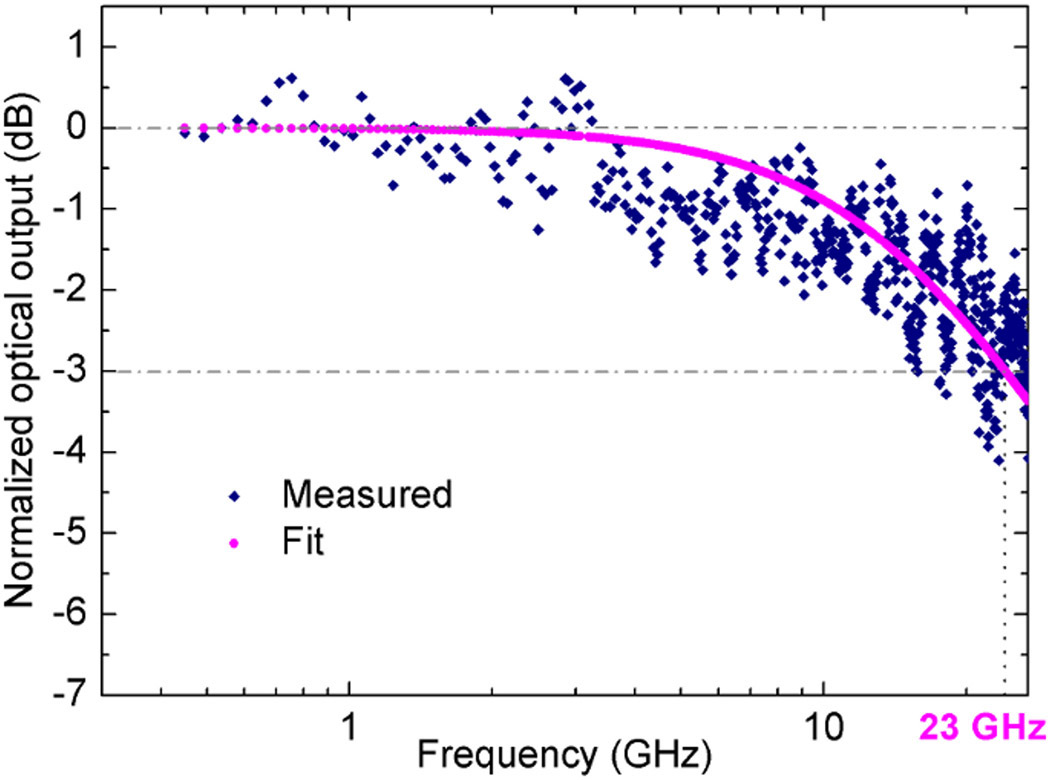 Figure 3. Normalized optical response at the DC reverse bias of -4.5Vas a function of the frequency.

This germanium MQW waveguide modulator gives ∼20 and ∼50 times reduction in size and power consumption comparable to high-speed wideband silicon modulators.3 By improving the overlap factor between the optical mode and the Ge/SiGe MQW region and optimizing the number of quantum wells, we expect to demonstrate smaller devices with even lower energy consumption and comparable modulation performance.

The research has received funding from the French ANR (National Research Agency) under project GOSPEL (Direct Gap-related Optical Properties of Ge/SiGe Multiple Quantum Wells). The device was fabricated at the nano-center CTU-IEF-Minerve, partially funded by the "ConseilGénéral de l'Essonne." Financial support for the epitaxial growth was provided by the Cariplo foundation through the NANOGAP project.