Toroidal multipoles are a subject of growing interest due to their unusual electromagnetic properties, which differ from those associated with the familiar charge and magnetic multipoles. Toroidal resonance is created by currents flowing on the surface of a doughnut-shaped structure, along its meridians. It was first reported by Zel'dovich to explain the parity violation of the weak interaction force in nuclear physics.1 However, the toroidal multipoles in these structures are usually neglected, due to the fact they are much weaker than electric or magnetic dipole moments. Metamaterials, however, when created as an array of artificial structures at sub-wavelength scales, exhibit unique optical properties due to electric and magnetic resonances not found in nature.2, 3 For arrays of metamaterials, this can include strong toroidal multipoles.

Toroidal response in metamaterials was first theoretically proposed by Marinov et al. in 2007,4 and toroidal wire windings for microwave frequencies were then reported by Papasimakis et al. in 2009.5 Subsequently, toroidal response in the microwave region was demonstrated experimentally by Kaelberer et al. in 2010.6 In the latter work, separation of toroidal dipoles from other multipoles was achieved by constructing four 3D resonant split metallic wire loops in a unit cell of toroidal symmetry. Whether or not the toroidal dipoles will resonate at higher frequencies—e.g., in the optical or x-ray regions—remains to be answered, since energy loss of metals is higher at optical frequencies. The dimensions and resolution of the resonators are also limited by the manufacturing methods used to make them. We recently reported that we had successfully made nanoscale upright U-shaped split-ring resonators (SRRs), using a double exposure e-beam lithographic process with high-alignment technology.7 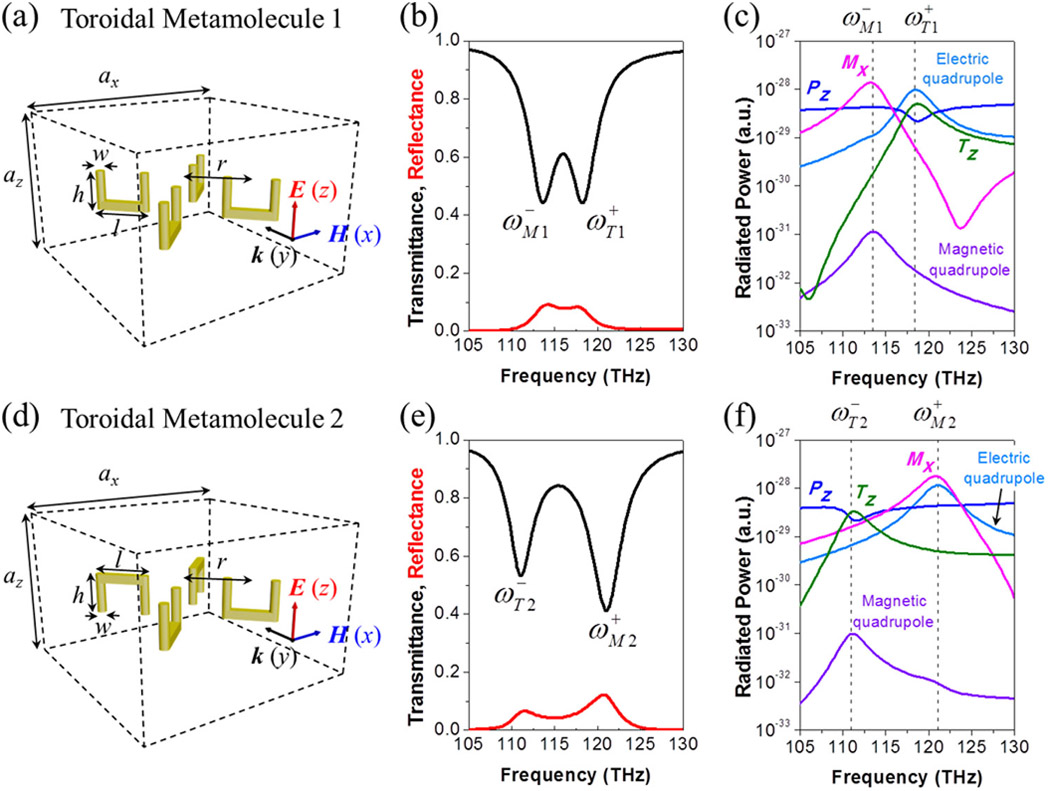 Figure 2. Magnetic energy (color map, in logarithm scale), streamline of magnetic field (black line) at respective resonances for the TM1 (a) and TM2 (b). The lower row: Schematic diagram of the electric (blue arrows) and magnetic (red arrows) dipole interactions, which illustrate the resonant modes of higher or lower energy.

In our recent publication,8 we analyzed two new simulated designs of toroidal metamolecules that excite the toroidal dipole resonance at optical frequencies. The first, toroidal metamaterial 1 (TM1), consists of four upwardly oriented U-shaped SRRs: see Figure 1(a). Toroidal metamaterial 2 (TM2) consists of two up, two down U-shaped SRRs: see Figure 1(d). In our simulation, we assumed that gold wires connecting U-shaped SRRs were embedded in a homogeneous dielectric medium, magnesium fluoride (MgF2). The simulation of transmittance and reflectance spectra for TM1 and TM2 are shown in Figure 1(b) and (e). Two resonances, denoted ω−M1, ω+T1 and ω−T2, ω+M2 can clearly be seen, where superscripts ‘+’ and ‘−’ correspond to the higher and lower energy levels. Comparing Figure 1(b) with Figure 1(f), the toroidal dipole and magnetic dipole are reversed: that is, the toroidal mode is excited at the higher frequency in the case of TM1 and at the lower frequency for TM2.

The radiated powers of the magnitude of electric and magnetic multipoles and toroidal dipole of TM1 and TM2 were calculated and are shown in Figure 1(c) and (f). In Figure 1(f), the x-component of the magnetic dipole moment Mx and the z-component of the toroidal dipole moment Tz is the strongest contribution at resonance ω+M2 and ω−T2, respectively. This result confirms that decreasing the size of the metamolecules achieves a plasmonic toroidal dipole response at optical frequencies.6 On the other hand, the radiation peaks of Tz and Mx exchange their positions from Figure 1(c) to Figure 1(f) as the orientation of two of the SRRs turns upside-down: see Figure 1(d). In Figure 1(f), Mx is still the strongest resonance at ω−M1. Owing to the in-phase oscillation of the induced electric quadrupole in each erected U-shaped SRR structure, the radiation power of the toroidal dipole moment is smaller than that of the electric quadrupole by a factor of ∼5.70 at resonance ω+T1. However, the strength of radiated power corresponding to Tz is much greater than that of the z-component of the electric dipole moment Pz, Mx, and magnetic quadrupole moments, by more than three orders of magnitude. This indicates that this design represents a new plasmonic metamolecule with a toroidal dipole resonance that can be excited at optical frequencies.

To explore the character of each resonance, we performed numerical simulations of the fields and dipole interactions of the resonances. Our results are shown in Figure 2. The first row shows the magnetic field distribution (in black) and the logarithm of the magnetic energy (represented by the color map, where reds are positive and blues negative). Due to the excitation of the plasmonic resonances, the magnetic energy is enhanced in the gap of the resonance rings in the case of toroidal magnetic resonances. The magnetic energy and field distribution of resonance mode ω+T1 is similar to that of ω−T2, and there is a corresponding symmetry in the relationship between ω−M1 and ω+M2. The second row of Figure 2 shows the separation of positive (+) and negative (−) charges and their corresponding electric and magnetic dipoles (p and m). In the case of TM1, the excited higher frequency is associated with toroidal resonance rather than magnetic resonance because the longitudinal electric dipole pairs (front and back pairs of the SRRs) show anti-phase and in-phase configuration, respectively. As a consequence, the electric dipole interaction plays a dominant role in determining the energy level of resonant modes.

In summary, we have presented two new related classes of plasmonic metamolecules that show profound resonant toroidal responses at optical frequencies. Our results clearly indicate that achieving toroidal response at optical frequencies could be possible with metamaterial arrays that can be manufactured by existing nanofabrication technologies. Manufacturing the plasmonic toroidal mode of TM1 will be more easily achieved due to the easier fabrication of upright U-shaped SRRs than inverted ones. This work provides a way toward promising applications based on toroidal resonance at optical frequencies. Our next steps will be to experimentally demonstrate what our simulations show: that toroidal dipolar resonance can be achieved at optical frequencies using our U-shaped metamolecules. We will manufacture these using a double-exposure e-beam lithographic process. We also hope to design a medium-gain plasmonic toroidal lasing spaser, a quantum amplifier of surface plasmons by stimulated emission of radiation.