Face-based recognition (FR) is popular with the military for establishing human identity. It has several advantages over other biometrics, such as iris or fingerprint systems. Not only are facial images non-intrusive, but they can also be captured in a covert manner at a standoff distance and are instantly understandable. Standard FR systems compare new facial images or probes with gallery pictures to establish identity. They perform perfectly well when lighting is good and cooperative subjects are close to the camera and without facial expression. However, many law enforcement and military applications deal with mixed FR scenarios that involve matching an IR probe image against all images (mug shots or passport photographs) in a visible gallery database. The probe images can often be acquired under unfavorable conditions, for example, at night. Commonly used thermal (long-wave IR) imaging systems for night-time operations lack the resolution needed for face recognition, and the images are affected by environmental conditions.

Recent FR work is motivated by the idea that different ranges of the electromagnetic spectrum might be better at capturing certain physical characteristics of the human skin pattern. The shortwave IR (SWIR) range (1.0–2.5μm) stands out because it meets application needs in diverse scenarios ranging from defense and security to biomedical imaging and spectroscopy. Its proximity to the visible spectrum makes it particularly relevant for use in FR applications. SWIR may pick up facial features that are not observed in the visible spectrum and can be combined with visible-light imagery to generate a more complete image of the human face. The SWIR range has only recently become practical for FR, particularly since the development of indium gallium arsenide sensors, which are designed to work well in night-time conditions. The external light source that may be required for regions in the SWIR band can covertly illuminate the scene since it emits light invisible to the human eye. At West Virginia University (WVU) we have developed an FR technique that efficiently matches SWIR to visible light images and can be effective 24 hours a day in the field.

We recently constructed an SWIR multi-wavelength acquisition system that can capture face images at five different wavelengths, from 1150 to 1550nm, in rapid succession using a rotating five-filter wheel.1 We used our system with a visible camera to collect face images in a controlled indoor environment.2 Cross-spectral FR experiments showed that SWIR face images captured at different wavelengths can be matched to visible images with very promising results.3

In both of these challenging environments, we collected probe images at a wavelength of 1550nm, which is particularly important for operational teams such as those in the armed forces. At this wavelength, SWIR imaging systems are eye-safe and are also tolerant to low levels of obscurants such as fog and smoke, providing the capability to see in night glow or night sky radiance. 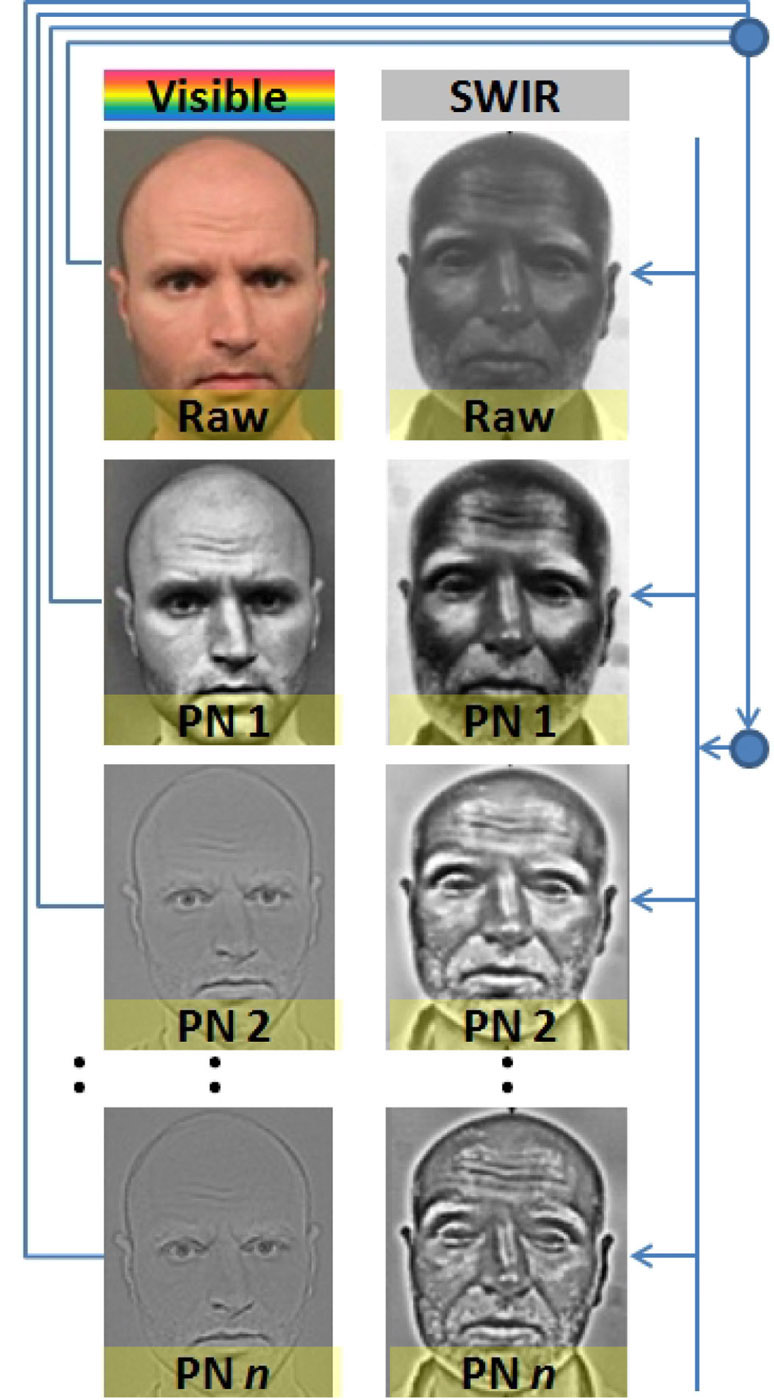 Next we plan expanded testing and to continue our efforts to improve further the performance of cross-spectral matching by incorporating improved normalization schemes that will bridge the spatial representation of face images acquired under variable spectra.

This work has been sponsored in part through the Office of Naval Research and by the National Science Foundation Center for Identification Technology Research. We would like to give special thanks to B. Lemoff from the West Virginia High Technology Consortium and to the WVU biometrics team: L. Hornak, B. Cukic, J. Dawson, A. Ross, and N. Kalka.

Thirimachos Bourlai is a research assistant professor in the Lane Department of Computer Science and Electrical Engineering. He received a PhD in electrical and electronic engineering from the University of Surrey, UK. His research interests include biometrics and biomedical imaging. He is a senior member of IEEE.